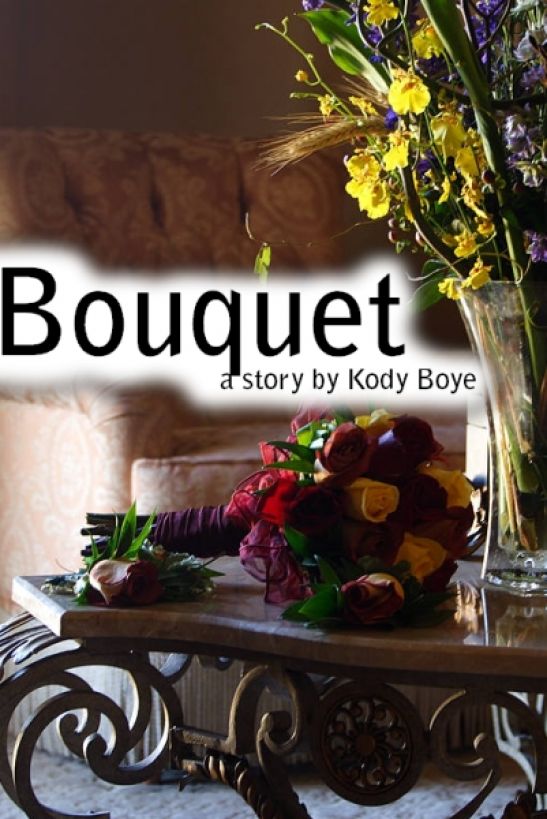 Without limiting the rights under
copyright reserved above, no part of this publication may be
reproduced, stored, or introduced into a retrieval system, or
transmitted in any form, or by any means (electronically,
mechanical, photocopying, recording or otherwise) without properly
crediting Kody Boye as the sole author and creator of this content.
This story is provided to you free or charge and should not be sold
in any way, shape or medium, print or digital. It may be reprinted
for personal use, but you may not reprint it in an anthology or
other media form without first contacting the author.

This book is a work of fiction. People,
places, events and situation are the product of the author’s
imagination. Any resemblance to actual persons, living, dead or
undead, or historical events, is purely coincidental.

This short story is being provided to
you free of charge. If you enjoyed it and would like to show your
appreciation, you may donate to the author directly via
PayPal.

Send any and all contribution to
[email protected]

The
Diary of Dakota Hammell
(Novella)

The man stands at the register buying flowers
for his boyfriend.

“
They’re beautiful,” the
clerk says. “Who are they for?”

In this socially-oppressed, medieval-minded
neighborhood, you can’t get away with being gay, so he lies. With
his tongue in cheek and his eyes clear, he simply replies, “For my
girlfriend,” with his face straight as ever. He thinks it’s ironic
that he just thought that, but he tries to push the sentiments
aside. Calling his boyfriend a ‘she’ doesn’t further diminish his
masculinity, as there is a ‘he’ in the ‘she,’ so there isn’t
anything to worry about, right?

“
Have a good day,” the
clerk says, passing money into the man’s hand.

He nods and leaves.

He drives home with his
hands on the wheel and his mind in the sky. His heart feels as
though it will fall out of his chest and it aches like it’s been
struck with a metal hammer.
Bang,
he imagines, it crushing his ribcage and hitting
his soul, and
boom
he thinks, for he has just delivered upon himself a horrible
realization.

It is their three-year anniversary.

He and his boyfriend have been together for
longer than most straight couples have.

It’s all right,
he thinks, looking down at the flowers in the
passenger seat.
He’ll like
them.

Shaking his head, he pushes his foot down on
the accelerator and tries not to think about just what it is that’s
haunting him.

“
Jim,” Michael says as he
opens the door.

He presents the roses as though they are
nothing more than trinkets, fake gold in a quarter machine.
However, despite their cost, and despite their commonly-held,
feminine sentiments, it is Michael’s smile that forces a grin
across his own face as his boyfriend takes the flowers in hand and
holds them as if they’re the most precious thing in the world.

“
I… I don’t know what to
say,” Michael says, turning his eyes up to face him.

“
Then don’t say anything,”
Jim replies.

The rose bears its thorn.

When Michael frowns, he offers nothing more
than a smile.

Somehow, Michael finds the means to smile
too.

They watch TV by the light of the bedside
table lamp. Light cast across the room and painting the room in
beige, it seems as though the TV cannot speak and is instead made
to cast its own light as well. Jim tries to watch it, but he can’t
help but look down at Michael, who is cradled in his arms as though
there is nothing wrong in the world. He is a child, Jim knows, of
their generation, of their socially-oppressed and
horribly-depressed kind.

Hold him,
he thinks.
It’s the only
thing that helps.

Outside, a neon sign covers a brick wall that
would have otherwise been the only thing there. The curtain is
drawn, but still Jim can see it, shining through the curtain like
it’s a devil hidden in a fruit bowl. Its V its beard, the A its
face, the devil smiles in shades of red, white and blue, completely
patriotic in semblance to their lives which are nothing but
ordinary.

He wants to say he is fine, that nothing is
wrong and that there is nothing that can hold him from the
happiness he so desperately wants to have, but he can’t. For some
strange, horrible reason, his tongue is silent, as though the cat
has caught it and made it its canary.

What do I say,
he thinks,
to someone
who doesn’t know?

So innocent Michael is that half the time, he
doesn’t even realize there is a slip within his mind, a stutter
within his voice or the pain within his skull. Headaches bloom
there often, wicked flowers meant to show him the meaning of the
world, but still Michael doesn’t notice. Sometimes, it makes him so
mad that he wants to bash his skull into the wall in a fake attempt
at trepanation, and other times, it makes him want to swallow as
many Advil as he can manage. However, he always does neither,
because he does not want to hurt not only himself, but his
boyfriend, the one he loves so much.

“
I’m fine,” he finally
decides to say, drawing his boyfriend close. “Don’t worry about
me.”

They continue to watch the TV as though there
is nothing wrong in the world.

Proclamation is king, and
when the devil says AIDs, it automatically points to them.
The gay disease,
they
call it,
the thing that the homosexuals
are made of.

“
All you have to do is be
around them to get it,” some preachers say, then spread their arms
to their communion. “All it takes is one simple step.”

Once, when Jim was late to
come home, Michael had called his workplace and asked if everything
was all right. Up until that time, his boy hadn’t been aware of the
existence of a young man named Michael and had asked Jim about it,
to which he simply replied,
It’s my
brother.

His boss didn’t buy it.

They had moved the next town over shortly
thereafter.

As Jim watches the TV in the kitchen with his
shirt halfway done-up and toothbrush in his mouth, he tries to
avert his eyes as the man on the screen continues to speak about
the AIDs epidemic. They say that people are dying, that gay men are
spreading disease because of drug use and unprotected sex. They say
they don’t use condoms, that they aren’t celibate and that they
party non-stop. Jim wants to scream, to say that it is all wrong
and that it isn’t true, but he doesn’t want to wake Michael.

His sweet, sweet Michael… how he couldn’t
live without him.

I work,
he thinks,
for him.

Automechanics is a manly thing for manly men.
He couldn’t be gay, his fellow employees say, because he’s under
the hood of a truck, because his jeans are stained with grease. It
is the one thing that keeps them alive at night and food on the
table.

He shuts the TV off with a simple click of
the switch. “Yeah?” he asks.

“
Are you going to work
today?”

“
Almost,” he says, then
frowns. Almost?
Almost?
What is he thinking? Of course he’s going to
work. “Yeah,” he says, raising his voice over the sound of the
toothbrush raking across his teeth.

“
Will you come here for a
second?”

Jim doesn’t think he can bear it, especially
after what he’s just watched on TV, but he spits the toothpaste in
the sink and turns toward the bedroom, swallowing what he couldn’t
spit out without a second thought.

As he passes into the bedroom, he expects
Michael to be out of bed—awake and fully dressed. Instead, he finds
the precious being he has so devoted himself to, naked and with the
sheet only barely covering himself.

“
Yeah?” he asks, leaning
into the threshold.

“
I just wanted to say I
love you before you went.”

Little does Michael know that those two words
are the only thing that keeps him going during the day.

“
Jim,” his boss grunts.
“You almost done with this car?”

He has been fixing this vehicle for the past
four years. Always it ends up with the same problem—a bad
carburetor, a slight of the wheel, a bad AC vent. He fixes all of
them with little more than a passing thought, as it’s his job and
it’s what he’s paid to do, but sometimes he wonders if Mr.
McKinny’s car is just buying its time before it one day explodes
out on the open road.

That,
he thinks,
would be a
sight.

He nods to his boss, bows under the hood of
the car, then begins to fix the problem he has fixed ten times
before.

He returns home at six in
the evening dead tired and
covered the
grease, so into the shower he goes. His clothes on the floor, his
mind in the ground, he barely hears the creak of the door opening,
much less feels the press of naked flesh against his.

His boyfriend slides his arms around his
waist and leans against his back. It is not sex Michael wants when
he displays this sort of emotion. No—what he wants is company, as
he feels loneliness during the day that Jim can’t help abide.

It’s all right,
he thinks.

His heart wants to break out of his chest.
It’s a sick thing, a creature of guilt and sorrow, though he knows
it is truly his mind who forces him to feel the way he does. A way
to a man’s heart is not through his chest, but his mind, and were
someone to want a direct way to the mind, they might try finding
way through his nose, as it’s the closest, most direct route to the
inside of his head.

“
How was work?” Michael
asks as the lukewarm water falls on both of them.

Michael doesn’t ask anything further.
Instead, he tightens his hold around Jim’s midsection and presses
his body against him.

In that moment, Jim can’t help but feel
sorrier than he already does.

He lays awake. Like he often does during the
night, he ponders on life and just what is happening around him. He
doesn’t believe in God, as it’s too complicated with the church in
such an uproar, and it’s not worth it to try and wish for better
things, as ninety-five percent of his check goes into rent,
utilities and living, so most of the time, he lays there and tries
to imagine just what the future would be like.