Read Boys in the Trees: A Memoir Online

Boys in the Trees: A Memoir 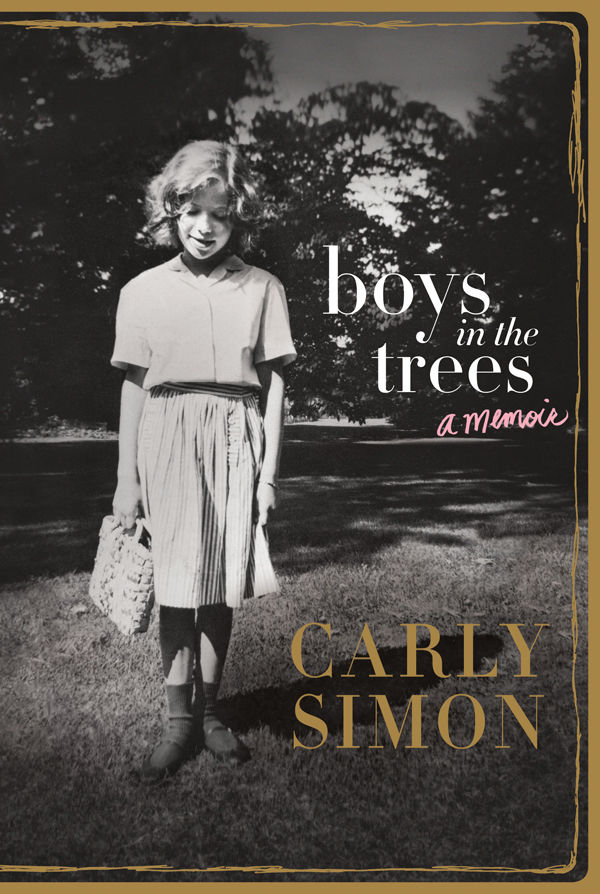 Dedicated to the first Orpheus, Richard L. Simon, my father, my beloved hero, understood too late for our peace to come during his lifetime.

Chibie (pronounced Sheebie), who would never allow a picture of her taken. Sorry, Chib.

T
his day may have been
the
day, the very day when my identity was born. Before the incident occurred, I didn’t think about who I was. After, I would spend the rest of my life testing myself to see if I had been right.

The whole family was gathered after dinner to make the acquaintance of a possible nurse for Peter, my brother, just born five months before. Lucy and Joey, my two older sisters, and I were all under the age of eight. We lived in the top floor of a six-story town house on Eleventh Street.

“Quick, girls, it’s almost eight, the plane got in an hour ago. Get dressed and wear shoes and socks and brush your hair.” Mommy was holding a cigarette between her lips. She tried to get a brush through the tangles of my feathery hair, and finally grabbed a barrette, attempting to get my hair to go somewhere it stubbornly wouldn’t go. She left it in a web of blond knots and went on to an easier task: brushing Lucy’s hair.

Andrea Simon still had to neaten up her chignon, don her black calf heels, and apply a new layer of lipstick. She always wore bright red.

From at least three rooms away I could hear Daddy playing the piano: a strong, beautiful classical piece he’d been working on. It sounded just like a record.

Daddy had been in the hospital for five weeks after Peter was born. He had had a “nervous collapse.” I would not learn about psychology until later, when the names and labels and diagnoses would collect and sprawl before me.

“Quick, girls.” Mommy hurried us along. “Don’t forget your manners,” she might have repeated several times so it would stick.

“I wish he’d play something from
Carousel
or
South Pacific
,” Mommy thought aloud. “It would make Mrs. Gaspard feel more comfortable, I should think. Rachmaninoff isn’t for this kind of meeting,” as if any of her three young daughters would know. She really did mean it, though, because she issued one final direction to us and then walked very fast into the living room to tell Daddy, I presume, to stop playing what he was playing and play something more “fun.” We girls followed her and could hear them having a minor argument, and then Daddy started playing “The Man I Love,” from
Strike Up the Band
, by George Gershwin. Gershwin had sent him a copy. My father was at the center of the publishing world in 1948, and he had gotten to know Gershwin while the company was doing a book on him. Daddy had started the company, Simon & Schuster, in 1924, with Max Schuster, and by 1948 things were only getting better.

“And he’ll be big and strong, the man I love,” Joey sang at the top of her voice. Daddy looked up approvingly at his eldest daughter. Mommy had gone for a minute to neaten her hair, and no one noticed that I was not only barefoot but I also had not changed out of my nightgown. It was almost as pretty as a dress, though. The best thing was that Daddy was back! Back to his old self! He was back at the top of his game.

The doorbell rang, and Mother, coming refreshed from her and Daddy’s bedroom, said in a singsong voice, “Coming.” She opened the big, heavy front door, and a woman entered slowly and with the grace of a ballerina. She was tall and had an attractively square head surrounded by light red, very wispy hair. I was nervous that maybe she would be very strict. But she was so tall and regal, us kids all came to the same conclusion: the potential nurse was auditioning for the job the way an actress would for a part in a play.

Daddy stopped playing and came out in front of the piano and introduced himself to Helen Gaspard. It was the kind of exchange Daddy was famous for: witty and charming. Helen seemed quite taken with him, as was everyone. With his height, standing straight at six foot five, his narrow and piercing blue eyes, and his full lips, he looked like a man back on the track. A man who could do almost anything.

Mother spoke to Helen as if she were sauntering down the gangplank of the
Mayflower
, a slowly enunciated, plummy Philadelphia accent. The accent was real—she had been born there—but it had also been consciously honed by watching Katharine Hepburn movies. Helen, however, was from
Canada
, and Mother’s pretentions were lost on her.

The entrance and placement of the Simon daughters must have looked choreographed: first Joey, tall and gangly but ultra-sophisticated, with perfect constellations of freckles like Daddy’s crossing her straight and perfectly proportioned nose. Her eyes, like Daddy’s, were narrow and blue, and her mouth was ingénue-perfect. She wore a white cotton blouse and a gray cardigan carefully tossed over her shoulders in just the right careless manner—a touch maybe inspired by some late-night Lana Turner melodrama. Her decorous full plaid skirt came to the middle of her slightly knock-kneed legs, and her white high socks fit neatly in black patent leather Mary Janes.

Lucy, five years old, was as demure as Bashful the dwarf. Her nose and freckles were almost identical to Joey’s, but Lucy’s eyes were like those of an Eskimo princess who had gazed too long into the icy waters of the North, causing a permanent squint to form. Lucy wore a rose-colored velvet dress with a white lace collar and, like Joey, patent leather Mary Janes. “Sweet” was written all over her, as she half hid behind her regal and slightly aloof older sister.

At almost three, I was the baby girl, a waif, blond sprouting in competing directions from my scalp. My nose was wider at the bridge than both my sisters’, a source of embarrassment for my father, who, I would later find out, favored the Nordic look in the women he loved. My nose wasn’t the only way I disappointed him. After two daughters, he’d been counting on a son, a male successor to be named Carl. When I was born, he and Mommy simply added a
y
to the word, like an accusing chromosome:
Carly.

Seven Archangels: Annihilation by Jane Lebak
Meek and Mild by Olivia Newport
Carnem Levare by Jaxx Summers
Ramage And The Drum Beat by Pope, Dudley
Just Visiting by Laura Dower
I Too Had a Love Story by Ravinder Singh
War From the Ground Up by Simpson, Emile
The Weight of Words (The WORDS Series) by Guthrie, Georgina
Drawing the Line by Judith Cutler
The Laird's Future Bride by Hazel Gower
Our partner