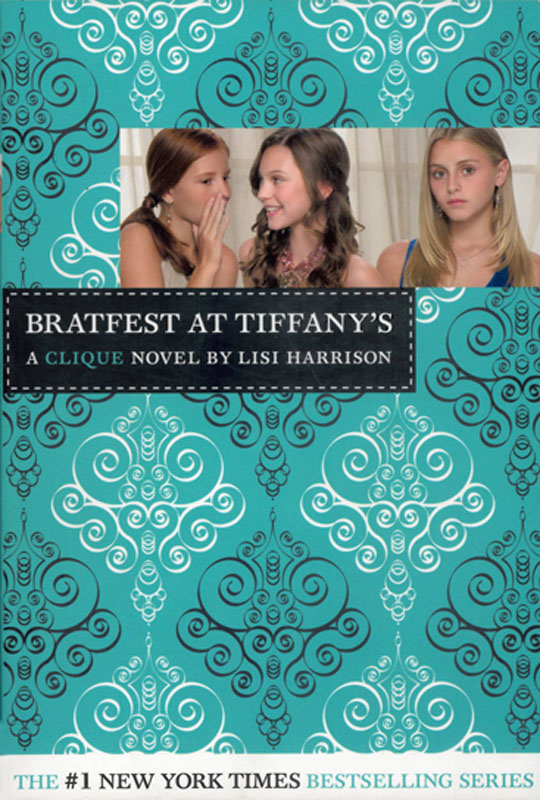 Visit our Web site at
www.HachetteBookGroupUSA.com
.

The only thing harder than getting in is staying in.

And keep your eye out for all five books in The Clique Summer Collection, coming April, May, June, July, and August 2008.

Keep your eye out for a new era of Gossip Girl: The Carlyles, coming May 2008.

THE PRETTY COMMITTEE STRIKES BACK

IT’S NOT EASY BEING MEAN

SEALED WITH A DISS

If you like THE CLIQUE, you may also enjoy:

Bass Ackwards and Belly Up
by Elizabeth Craft and Sarah Fain

Secrets of My Hollywood
Life by Jen Calonita

For Jesse Fox, who was with me every day while I wrote this.

ALL STUDENTS MUST KEEP OUT UNTIL 8 A.M. NO EXCEPTIONS
.

“Puh-lease!” Massie Block ripped the sign off the frosted glass doors of the Café.

“What are you
doing
?” gasped Claire Lyons, searching the empty hall for witnesses.

“It’s a piece of poster board, Kuh-laire.” Massie kicked it aside. “What’s it gonna do, paper-cut us to death?”

“Now get serious. This mission is top priority.” Massie gripped the door’s silver pump handle, with its back-to-school shine, and then paused to admire her deeply tanned, Chanel No. 19–scented hands.

Their rich butterscotch hue said, “Why, yes, my summer
was
perfect. I feel confident, relaxed, and on top of my game. I’m ready for the new year. Ready for the Briarwood boys to move into OCD. Ready to meet
and
defeat the new crop of seventh-graders. Ready to dominate—eighth-grade alpha style.”

But if asked, her heart would have told a very different story. …

More than anything, Massie wanted to collapse on the freshly waxed floor, curl into the fetal position, and roll straight into the school shrink’s office. Once comfortable, she’d tell Dr. Baum how she’d been stressing about this day since mid-May. How she was secretly afraid of the Briarwood boys. How her alpha status was in jeopardy. And how she was on high alert, in extreme danger of becoming an LBR.

“What exactly is an LBR?” Dr. Baum would ask, burgundy Montblanc poised above her yellow legal pad.

“I’m not afraid of
boys
,” Massie would snap. “Just the Briarwood ones. Well, actually the soccer players.”

Massie would inhale deeply and then continue.

“Last year, the Pretty Committee won this key to a bomb shelter in the basement of OCD. Inside, there was a flat-screen that linked to the boys’ sensitivity-training class at Briarwood. We watched it a few times and heard all of their secret confessions. …”

Dr. Baum’s thin, coral pink lips would part, but knowing it was her job to listen and not judge people for spying, she’d nod attentively and continue speed-writing.

“After that we kind of started acting like freaks around our crushes because we thought we knew what they were thinking, even though it turns out we really didn’t, so they all dumped us at Skye Hamilton’s end-of-the-year costume party.”

Flipping to a new sheet of paper, the shrink would continue scribbling at a wrist-snapping pace.

“And it’s not so much being
dumped
that bugs me,” Massie would explain, “because it’s kind of alpha to have a bunch of ex-crushes. It shows you have experience.”

“So what
is
it that bugs you?” Dr. Baum would finally allow herself to ask.

Massie would run her hand across the pea green chenille fabric on the worn couch, searching for the best way to explain.

“It bugs me how the girls at OCD are so super-excited to have boys at our school.”

Dr. Baum would stop writing, look up, and put on her LensCrafters. Her head would tilt slightly to the right, and her black, overgrown brows would collide in confusion.

“Be-
cause
,” Massie would sigh, “if they’re as excited as I know they’re going to be, the boys will be upgraded to ‘beyond popular’ status, which automatically makes
them
the new alphas. And if the new alphas don’t like
us
—which they don’t—the Pretty Committee will be downgraded to LBRs. And if I become an LBR …” She’d look up at the white stucco ceiling, reversing the direction of her hot tears. “And if I become an LBR, I’ll have to move to Canada and start over and …” Massie would look at the doctor intensely. “And Glossip Girl doesn’t ship to Canada.” She’d grab a Puffs Plus from the wicker box on the end table and blow. “No one does.”

At this point Dr. Baum would immediately put down her notes, buzz her secretary, and insist she cancel all appointments for the rest of the year so she could devote all of her time to this very serious crisis. …

The idea was to quadruple the weight of her lips, transforming them into an impenetrable wall. That way, her insecurities would be trapped inside her body, unable to escape. Better they stay churning and burning in the pit of her stomach than make themselves known on this crucial day, where first impressions could make or break the entire year.

“Are you sure we need to do this
now
?” Claire’s desperate whine forced Massie back to reality.

“More than sure.” Massie reached into her Be & D silver-and-black Venus bowler bag and pulled out a purple glitter-covered placard. She slapped it into Claire’s clammy hands.

“That’s what it says.” Massie beamed. The shiny, swirly letters were symbolic of her secret pledge—to sparkle and shine every day in the eighth grade.

Over the weekend, she’d ransacked the Westchester Mall, and bought up anything and everything that reflected light. But now, as the bright morning sun flooded the vacant halls of Briarwood-Octavian Country Day, Massie’s long-sleeved indigo sequin Tory Burch top suddenly reminded her of a tacky
Dancing with the Stars
contestant. And that made her snippier than Katie Holmes’s hairdresser in 2007.

“Kuh-laire!” she huffed. “Eighteen is
our
table. I don’t want some LBR seventh-grader or a pack of Briarwood boys to claim it. Do you?”

Claire knit her blond brows, which looked whiter than usual against her sun-soaked skin. “Why don’t I just wait here, so when they open the doors, I’ll be the first one in?” She glanced over her shoulder and checked the big white clock above a
BOYS “R” US
banner the student council had spray-painted on a white Frette sheet.

“Um, are you my favorite Chinese takeout dish?” Massie tossed her long dark bangs past her gold-dusted cheekbones.

“Then why act all gung ho?”

“I’m not.” Claire reddened. “I just don’t understand why I have to break into the Café and risk getting in trouble on my first day back.”

Massie twirled the purple hair streak below her right ear, which she’d dyed during her summer stint in Southampton. If anyone asked, she’d say a Parisian fashion insider had entrusted her with this soon-to-be-international trend. It was much easier than explaining the truth. And a lot more believable.

Secrets of the Fire Sea by Hunt, Stephen
Hustler by Meghan Quinn, Jessica Prince
Just The Way You Are by Barbara Freethy
El asno de oro by Apuleyo
Stay Tuned for Danger by Carolyn Keene
Suzanne Robinson by Heart of the Falcon
Safer by Sean Doolittle
Suddenly Sorceress by Erica Lucke Dean
Surrender to a Wicked Spy by Celeste Bradley
Hello Darlin' by LARRY HAGMAN
Our partner