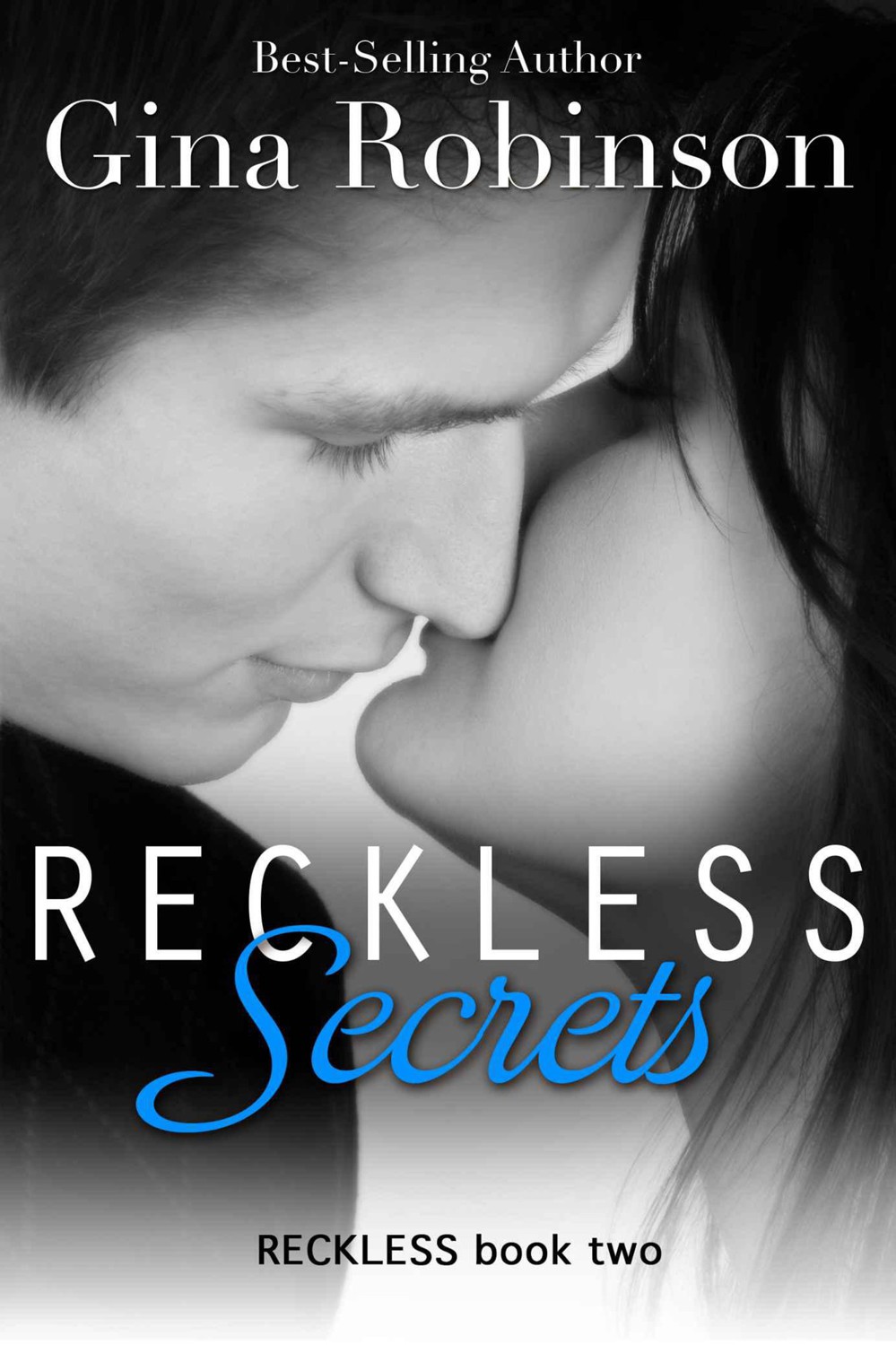 Cover Design by The Killion Group

Book Two of the Reckless Series

Everyone Has a Secret

At nineteen, Ellie Martin is finally happy. Deliriously, delightfully, delectably happy. Her junior year in college, while not without some major issues, is turning out better than she ever dreamed. She's finally found closure to a question that has bothered her for as long as she can remember. She's even been able to put some serious distance between herself and her twisted mother. Best of all, she's in love with the hot, handsome, and mysterious Logan Walker.

If only she could share with Logan the one thing she must keep secret. The one relationship that, if he finds out about it, will blow apart everything that brings her happiness.

Even as Ellie and Logan learn to open up to each other, even as they get closer than they've ever gotten to anyone else before, the reckless secrets they're holding on to may just be the thread that unravels everything.

My bitch of a mother has kept a secret for nineteen years. A secret from me that I should have known from the very beginning, even before I was conscious of what it meant. A secret from my father. From my grandparents. From everyone. A secret that had blossomed over the years to such epic proportions that it now threatened my very happiness. Everything good in my life was hanging on one delicate silver strand of a web of deception. While I dangled helplessly at the end of it like a spider in the wind. At the mercy of fate and the truth.

If I had known the truth, my life would have been different. Would it have been better? There was no way to know. In any case, I wouldn't have been here, fighting for the love of my life against increasingly mounting odds.

I balled my fist and pounded the concrete step I sat on in front of my dorm, huddling against not just the cold air, but raw, cold, staggering emotion. My selfish, ultra-competitive mom had kept me from joy and a happy childhood. And dragged me through her three miserable marriages and countless other horrid relationships. Through three mostly bastards of stepdads and no real dad. Certainly no loving dad. I was no one's little princess.

All the while Mom played the evil queen to my Snow White, always striving to prove she was the fairest of them all. Fairer than I was, in any case. But then, I hadn't tried. I had never wanted to compete with her. So I made myself plain and invisible.

But a one-sided competition didn't stop her. She went after my boyfriend. Slept with him. Destroyed the best of her three marriages when my latest stepdad and I walked in on Mom and Austin making the sign of the two-humped whale on Mom's living room sofa. That was a sight I still couldn't fully get out of my mind.

Her ultimate betrayal sent me running to unravel her secret—who was my biological father? Why had she refused, all these years, to tell me, or anyone, who he was?

I had been hoping I had at least one biological parent who wasn't a complete skank. I just hadn't known tearing apart the deception would be like unleashing the evils of Pandora's box. Now, like Pandora, all I had left was a sense of hope, and even that was ebbing.

I wondered—without her lie, would I have ended up in this same spot, here at the same university? Would I be the person I am? Would I have met Logan? And fallen in love with him?

I blinked back tears, wiping them away with the back of my hand as I sat alone on the steps to the courtyard that conjoined my dorm with its twin. In the cold of a clear November morning, I held my cell phone in front of me.

After spending the night with Logan, I should have been ecstatic and glowing, not scared out of my mind that I would lose him. I touched my lips, still feeling the tingle of his kiss on them, longing for the heat of his body next to mine again.

I love you, El.
I pictured the way he'd looked last night when he told me and my heart broke and the phone trembled in my hand.

Would I sacrifice his love, put it at risk, for a chance to get to know my father? Being fresh from Logan's bed clouded my judgment. But I was in too deep now. I couldn't back out, not even if I wanted to. My only salvation would be if Jason didn't want any relationship with me now that we knew he was really my dad. Then maybe we could sweep this all away and no one would ever be the wiser. But that would break my heart, too. And prove that I had two horrible parents. Biologically, I'd be doomed.

I'd tracked Jason Front, the only suspect in my paternity, to this university. Transferred here from a perfectly good college across the state. Gotten a student job that I really needed to stay in school working for him in the university IT department so I could study him and decide whether I wanted to reveal myself as his potential daughter.

Logan had simply fallen into the equation, another victim of fate. I met him the week before class at a Week of Welcome event in the most adorable way possible—when he played my support person while I got my bellybutton pierced. I tried not to fall for him. I tried not to ever see him again after that first night. Was it my fault that he worked for Jason, too? That he was Jason's favorite? I'd been as surprised as anyone when Logan strolled into the IT office on my first day of work and sent my heart beating out of control.

What was I supposed to do then, when I'd only just met Logan and all there was between us was a spark of something wonderful—walk away from the job I desperately needed to stay in school? Leave the chance for the dad I'd been longing for my whole life?

I hadn't meant to use Logan. I
hadn't
used Logan, not on purpose. He'd known all semester I was keeping a secret from him. I had told him I was and he was fine with it. But would he be when he found out what that secret was? Or would he feel like I'd used him all along?

My deceit was all so accidental. The situation just evolved until I was in too deep to tell him the truth. And now when Logan was so vulnerable and just starting to heal from his ordeal and when he loved me, now I was standing on a life-changing precipice where everything could go terribly wrong.

I glanced at the text I'd gotten from Jason last night while I was still in Logan's bed.

I got the results. Looks like I'm the one. Don't share this with anyone. We need to talk.

Would Logan resent my new relationship with Jason, my blood bond? Or would there be no relationship? Jason could just as well tell me to get the hell out of his life for good. He could reject me like all my mom's other men. I could lose Logan and my father.

A chill wind kicked up. I held the collar of my cute wool coat, the Kate Middleton knock-off, closed to block the wind, but shivered anyway. My legs were bare. I had refused Logan's offer of a shacker shirt and loaner sweats. I wore my short black and white polka-dot dress and cute strappy heels from going out to dinner with Logan and his dad the night before. My hair was tousled and my makeup smudged. I looked every bit the mess I was.

After Mom slept with Austin, I did something desperate. I tore up the house, looking for her private diary, the one she had supposedly kept when I was conceived and born. I hadn't even known if it still—or ever had—existed. My grandma had mentioned it once casually in passing. I had looked for it several times over the years with no success. But after her betrayal, I was a woman possessed. And I got lucky.

I found it and a single clue—a name in her diary.
Ellie's father must be Jason Front.

That was all the ink she dedicated to him. All the information she revealed, even to her private self. You can see why I was leery about him—why couldn't my mess of a mother say more? What if he was even worse than my stepdads?

I was crazed. I left home and searched relentlessly for him, scouring the internet and tracking down leads. Finally I found him working as director of information technology at this university. He had no idea I even existed. No idea he was quite probably my daddy.

I was trying to assess what kind of a man he was and whether I wanted to reveal myself to him. If he was a douchebag like Mom, there really was no point. My life was messed up enough as it was. But as I got to know him, I quickly found out that everyone loved Jason. I did, too. He was a great guy with a pretty wife, a beautiful baby daughter, and a perfect life. Just when I decided I didn't want to screw it up for him and would continue to keep my existence a secret from him, he pulled a Mom on me. He caught me on a nanny cam while I was babysitting his daughter and telling her she was my sister.

He accused me of having some kind of daughter fantasy about him. So I confronted him with the truth and forced him to take a paternity test from a drugstore DNA kit. And now here I was on the Saturday of Dad's Weekend, surrounded by dads, in love with Logan, and the results were in.

Appropriate, really. Dad's Weekend of all times. I had just met Logan's dad. He was a complete ass in the fullest sense. But that's a big step, right? Being introduced to the dad.

I stared at my cell phone. All I had to do was open the email from the DNA testing company, click on the link they'd sent, and read the results so I could see the irrefutable proof for myself. My hands trembled. I felt like I was made of ice and ready to shatter.

I steeled myself, brought up the email, took a deep breath, and clicked on the link provided, entering my password. I closed my eyes and prayed, though I wasn't sure for what. When I opened my eyes again, my hands were shaking so badly, I could barely read the results.

Wicked Deception by Cairns, Karolyn
Reign Check by Michelle Rowen
Carol Cox by Trouble in Store
Bet on Me by Mia Hoddell
The Armour of Achilles by Glyn Iliffe
Only Trick by Jewel E. Ann
Abhorsen by Garth Nix
Bloodstone by Paul Doherty
The Killing 3 by Hewson, David
Raber Wolf Pack Book Two by Ryan Michele
Our partner