Read Breaking Into the Business Online

Breaking Into the Business 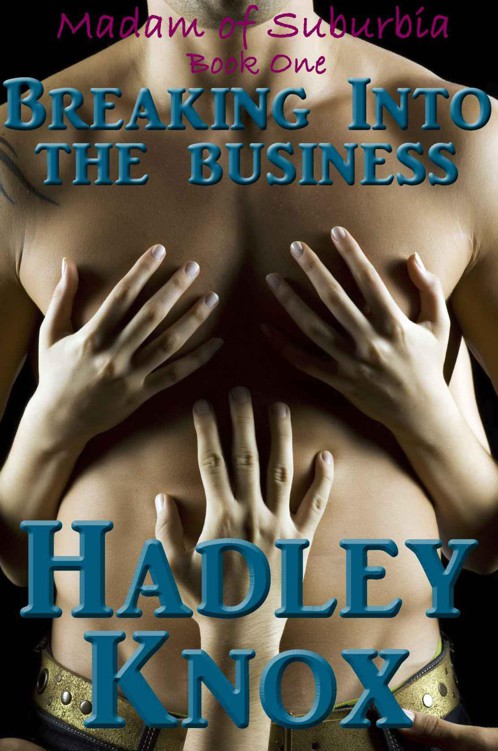 Breaking into
the Business

Madam of Suburbia Book One

Breaking into the Business

This book is a work of fiction. Any references to historical
events, real people, or real locales are used fictitiously. Other names,
characters, places, and incidents are products of the author’s imagination. Any
resemblance to actual events or locales or persons, living or dead, is entirely
coincidental.

Breaking into the Business

Note from the
author:

This book is not
meant to promote or condone prostitution in any form. Any viewpoints expressed
by characters are meant purely for entertainment purposes and do not reflect my
personal ideology.

All characters
in this book are completely fictional and not based on any real individuals.

During sexual
encounters, it is not specified in the story whether or not characters use any
sort of protection. I have left it up to each reader to decide if this
occurred.

I
cringed with shame as a man whose name I couldn’t recall undid my bra. He
kissed the nape of my neck as I searched my memory bank for where we had met.
The night began at a restaurant, before my friends and I had moved on to our
favorite bar. I gave up my search as he ran his finger down my stomach towards…

The
alarm blared in my ear. I rolled over and slammed my palm on the snooze button,
hoping for just a few more minutes of sleep. The sun had broken its way through
my window, trespassing into my room and reminding me of the time in a much more
subtle way than my annoying alarm.

I
sat up in bed and pushed my legs out from underneath the covers. A knock
sounded on my door and Jake poked his head in.

“Mom,”
he said. “Are you just now waking up? We have to leave for school in five
minutes.”

“I’ll
be ready, dear,” I said, wiping my face before rolling my neck around to work
out the kinks.

The
night before, I had stayed up late working on my latest pile of manuscripts,
but even after I went to bed, sleep had been elusive. Once sleep had finally
decided to grace itself with its presence, it hit me like a ton of bricks.

As
I walked to the bathroom, I realized that my heart was still pounding. Sex
dreams had become more frequent lately. I chalked it up to the fact that it had
been months – no years – since the last time I had sex. After Frank left the
kids and me, I just lost something in myself and another man was the last thing
on my mind.

There
wasn’t enough time to complete my morning ritual before I had to leave. There
was a time many years ago that I never would have left the house without makeup
or fixing my hair, but life had a way of beating that sense of self-worth out
of me.

I
tried running a brush through my tangled brown curls, but gave up, and just
pulled it all back behind my head and put it up in a ponytail. The sweats and
t-shirt I wore to bed would work for the morning, since I only had to drop the
kids off at school and come right back.

Before
leaving the bathroom, I stopped and checked myself in the mirror. Other than
the fact that I had quite apparently just woken up, I felt good about myself.
At thirty-two, I could still count myself slender, a fact that I never took for
granted. Despite my best friends’ proclamations that I was pretty, I thought of
myself as one of those people who
could
be attractive if I spent just a
little time on myself.

I
slipped on a pair of sneakers and bounced down the steps to the first floor.
Jake was finishing his cereal while Mallory sat in her usual spot on the couch,
her fingers working vigorously on her cell phone. I could never understand how
she had so much to say or that she had enough friends that it required so much
of her time. Luckily, I was smart enough to buy a cell phone plan with
unlimited texting.

“You
ready?” I asked them, grabbing my keys from the ceramic bowl on the bar.

“Um,”
Mallory began. I could already hear the attitude boiling up and preparing to
blast me in the face. “We’ve been ready for a while, Lana.”

“Excuse
me, young lady,” I said, staring her down. “I’ll call the phone company right
now and have your phone cut off.”

“Sorry,”
she replied between clenched teeth. Then she added the word that I had been
looking for. “Mom.”

“That’s
much better,” I forced a smile. “Now get your mean butt in the car.”

Mallory
may have taken after me physically, but her personality was the spitting image
of her asshole father. Indifference and disrespect. Those two words
characterized Frank the best. In fact, he was so good at those two words that
he had packed up and left two years earlier with only a hastily written note as
his explanation.

The
drive to the school was quick, which only made me question why the kids couldn’t
just walk to school. I knew that wasn’t an option, because none of the other
children walked. That was one of the biggest hang-ups about living in this
neighborhood. All the other families had loads of money, and with that money, came
a whole bag of prestige and snobbery. I would never allow my children to be
victims of that hate.

I
stopped in front of the school and they both jumped out of the car. Jake was
thoughtful enough to tell me goodbye before he grabbed his bag from the
floorboard and set out. Mallory didn’t say a word.

As
frustrated as I could get with her, I had to remember that she was at that
difficult age of fourteen when her entire world was changing. On top of that,
she had to deal with the loss of her father.

Jake
had handled the whole business of Frank’s departure much better than I ever
thought possible. The similarity between father and son stopped at the physical.
Emotionally, Jake was more like me, and I thanked God every day for that fact.
We were tough eggs to crack, resilient to pain.

I
turned into the driveway and nearly hit the little red pickup parked there. In
the short time since I had left to take the kids to school, Derrick had arrived
to clean the pool. He was such a sweet boy and his rates were the cheapest I
had found. He was prompt with his three visits each week and on the occasions,
I was at the house, he was courteous and respectful.

When
I walked into the house, I peeked out the back windows, but couldn’t see Derrick.
When I walked into the kitchen, I set the keys back in their place and grabbed
a bottle of water out of the fridge. I nearly knocked over the giant stack of
mail on the island.

My
heart sank. I knew exactly what happened. Every week or so, Mallory would have
to go the mailbox, because if she didn’t, the lid would not close. I hated
checking the mail more than anything. All that came recently were bills and
more bills. They were stacking up so fast that I could practically make enough
money on recycling them to pay the mortgage.

I
wanted to scream and ram my hands through the pantry door. Frank was such a
bastard. At least he had been kind enough to leave me every cent in the bank account,
but he had also left me all the bills. I made a fair salary as an editor, but
it still wasn’t enough to maintain our previous lifestyle.

The
savings began to shrink the day after Frank left. We had a sizable nest egg put
back, but it went fast when there was only one income for a family accustomed
to upper middle class living. Fast forward two years later and there wasn’t
much left. The kids and I had made an agreement to cut back where we could, and
so far, we had done a great job of it. Both Jake and Mallory agreed to purchase
their clothes from a second hand shop two towns over that sold name brand
clothes at a fifth of the price, and we had all agreed that we didn’t need all
the movie channels. As the savings dwindled, we tried to cut back more, but I
was willing to allow my children to sacrifice only so much.

The
worst thing that could happen was for us to lose the house. I was not prepared
to face that one eventuality. The whole reason Frank and I chose this
neighborhood in the first place was the school. Out of all the schools in the
state, Stone Park High School was the best. If Jake and Mallory continued with
the grades they were making, then their potential for success after high school
would be secured.

No,
I wouldn’t lose the house. Living in this damn uppity neighborhood was the only
way to make sure they could still attend. Maybe I would take on an extra job.

Setting
the bottled water down on the counter, I walked to the back of the house. Four
enormous windows provided a remarkable view of our spacious, extravagantly
landscaped backyard. Jake and I completed that project a few weeks before. For
only a few hundred dollars, the two of us had made the backyard beautiful
enough to be featured on a magazine cover.

I
scanned the side of the pool and there was still no sign of Derrick. A slight
hint of worry crept up, as I hadn’t seen him when I first walked in either. He
might have gone to his truck to get something, but he would have been back by
now.

Reaching
up and grabbing the handle, I slid the glass door back and walked outside.
Immediately I saw the bucket of chemicals and the cleaning net resting on top. However,
there was no sign of Derrick.

I
walked past the two lounge chairs and towards the edge of the pool. I let out a
breath of air when I saw him in the water.

When
his head broke the surface, I saw his shoulder length blond hair was wet and
mashed against the side of his head. He lifted his hands and pushed it away
from his face, but he still hadn’t opened his eyes to see me.

As
he stepped out of the pool, I watched the water drip off his deeply tanned,
well-toned torso. His dark complexion had come from hours in the sun, and his
rippling arms were the result of slinging that cleaning net around everywhere.
I felt something in my chest flutter, but I couldn’t turn my gaze away.