Read Getting to Happy Online 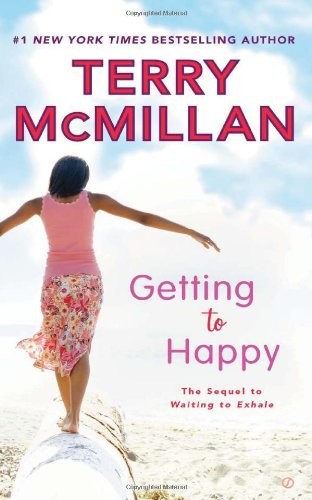 If I Sit Still Long Enough

You Need to Watch Dr. Phil

You Can Never Be Too Sure

I Need a Fucking Vacation

I’d Rather Work at Walmart

Stick a Fork in Me: I’m Done

Is That Your Final Answer?

Today I Got a Letter

Mama
Disappearing Acts
Breaking Ice: An Anthology of Contemporary African-American Fiction
(editor)
Waiting to Exhale
How Stella Got Her Groove Back
A Day Late and a Dollar Short
The Interruption of Everything

First published in 2010 by Viking Penguin, a member of Penguin Group (USA) Inc.

Grateful acknowledgment is made for permission to reprint an excerpt from “March” from
A Village Life
by Louise Glück. Copyright © 2009 by Louise Glück.

Getting to happy / Terry McMillan.

The scanning, uploading, and distribution of this book via the Internet or via any other means without the permission of the publisher is illegal and punishable by law. Please purchase only authorized electronic editions and do not participate in or encourage electronic piracy of copyrightable materials. Your support of the author’s rights is appreciated.

Dedicated to Mrs. Helen Johnson
Who deserves as much happiness as she can stand

Nothing can be forced to live.

The earth is like a drug now, like a voice from far away, a lover or master. In the end, you do what the voice tells you. It says forget, you forget.

—from “March” by Louise Glück

We create ourselves by our choices.

For those of you who may have seen the movie that was based on my novel
Waiting to Exhale
, please be aware that it was indeed a movie. As one of the screenwriters, I acknowledge that we strayed from the book, took many liberties and ended it the way a film should leave you: hopeful and somewhat pleased. Well, sorry to say that after these women left that campfire on New Year’s Eve 1990, way out in the middle of nowhere surrounded by nothing but each other and a pitch-black desert in Phoenix, they found out that apparently exhaling is a relative state that is difficult to sustain. Like the rest of us, I assumed they flourished and floundered over the years. To be honest, all four of them got on my last nerve long after their shelf life and I forgot about them each time I met a new set of characters to worry and care about. Fifteen years later, however, these women suddenly began to reclaim their place in my heart, and, like old friends you haven’t seen since college, I wondered how they might be faring now. And, like a good bottle of vintage wine—when aging is savored because it usually enhances the flavor—I had hoped that their lives might now be easier, smoother, solid, joyful. A lot happens in fifteen years. And like the rest of us, I realized that these four women are still trying to get to happy.

“Are you sure you don’t want to come to Vegas with me?” my husband asks for the second time this morning. I don’t want to go, for two reasons. First of all, it’s not like he’s inviting me for a hot and heavy weekend where I’ll get to wear something snazzy and we’ll see a show and casino-hop and stay up late and make love and sleep in and order room service. Not even close. It’s another exciting trade show. Isaac builds decks, fences, gazebos and pergolas, and as of a few months ago, playhouses. He’s in love with wood. Can I help it if I don’t get worked up hearing about galvanized nails or color-clad chain links and breakthroughs in screws and joists?

I don’t bother answering him because he’s known for weeks I’m under a deadline for a story I’m doing on the rise in teenage pregnancy in Arizona—Phoenix in particular—which is the other reason I can’t go. I’ve been sitting in front of my laptop in my pajamas for the past forty minutes waiting for him to leave so I’ll finally have three and a half days to myself to focus. But he is taking his sweet time.

“I didn’t hear you.” He’s looking for something. I dare not ask what. “You’d have the room all to yourself for most of the day. You could still work.”

“You know that’s not true, Isaac.” I take a sip of my lukewarm coffee. I’ve been to so many of these conventions, trying to be the supportive wife, but I always get stuck with the wives, most of whom just want to sit around the pool all day reading romance novels or
People
magazine while they sip on margaritas and eat nachos, or linger in the malls for hours with their husbands’ credit cards, trying on resort wear for the cruise they’re all going on in the near future. I’m not crazy about cruises. I went on one with Mama and my sister, Sheila, and those long narrow hallways gave me the creeps because I’ve seen too many horror movies where the killer jumps out of a doorway and pulls you inside. After two or three days of being out in the middle of the ocean with no land in sight until you wake up not knowing what country you might be in front of, by day four I was ready to jump off our balcony and backstroke home.

And then there are those obligatory convention dinners. I’d sit there in one of the hotel ballrooms at a table full of contractors and their now-gussied-up wives, trying to be sociable, but I was basically making small talk since they never discussed anything that might be going on in the world. Call me elitist, but this often made me feel like an alien who’d been dragged to another planet by my husband because he, as well as they, didn’t seem to think producing television shows about cultural and social issues was as interesting as all the things they could build out of lumber.

It truly irks Isaac that people don’t respect or appreciate the role wood plays in our lives. That we aren’t aware of how much we take it for granted—as if it’ll always be here—and how much we rely on it yet overlook its value to the point we ignore it and its beauty. It would be nice if he still saw me the same way. For about eight of the past ten years it felt like he did.

As Isaac passes behind me, he smells like green apples and fresh-squeezed lemons. For a split second it reminds me of when we used to linger in the bathtub surrounded by sage and lemongrass candles, my back snug against his chest, his arms wrapped around me and our toes making love. Those were the good old days.

I snap out of it.

Now he’s pushing my favorite mustard-colored duffel across these terra-cotta tiles with those size-fourteen boots, leaving black scuff-marks behind him as he simultaneously pulls a white sweatshirt over a white undershirt. It’s a V-neck and shows the top of a black forest on his chest. “If I could, you know I would,” I say while checking my e-mail. Of course there are back-to-back messages from Robin: a joke I don’t bother to read and an attachment about a new motionless exercise she told me and Gloria about last week that almost had us choking from laughter. She believes almost everything she sees on TV.

“You just don’t want to go,” he says, and starts looking through his pockets to make sure he has everything. He doesn’t. I know just about all his patterns. “Why don’t you just come out and say it?”

“Because it wouldn’t be true.” I rarely lie, although I’m not always a hundred percent honest. This is one of those times.

“Then I guess I’ll see you on Tuesday. After rush hour.” He walks over, presses his palms against my shoulder blades, gives them a little squeeze, bends over and gives me a peck on the cheek. I don’t feel a thing except the scratchy new growth on his face.

“You have everything?” I ask.

“Of course it would matter to me, Isaac.”

Right before he gets to the door leading to the garage, he turns and looks at me as if he doesn’t believe me. Isaac knows we’re on shaky ground. “I’m seriously beginning to think you might be racist.”

He’s trying to find a button to push. I’m not falling for it. Part of our problem is he’s forgotten how to talk to me. He’s forgotten how to ask me a question that doesn’t put me on the defensive. All those sessions with the marriage counselor—for some of which he played sick, or was too busy drilling or hammering—aren’t saving us. I’m tired of this war, which is why I’m ready to hold up a white flag. “Aren’t you supposed to be picking up somebody?”

“Yes. How’s that for an honest answer?” I feel my body stiffen, using the truth to lie. “Have a good time, Isaac. Wait a second! Did you remember to make the loan payment?” I only ask because he seems to have had a little bout of amnesia off and on the past six or seven months. It’s the cause of brand-new friction. I have no idea what he’s been doing with his money. It’s not gambling, that much I do know. He stays away from the Indian casinos and usually dreads these conventions when they’re in Vegas. He thinks gambling is too much of a gamble because most people lose. That’s not really it. Isaac is just too cheap.

Breathing Water by Timothy Hallinan
Eye for an Eye, an (Heroes of Quantico Book #2): A Novel by Irene Hannon
Ring of Fire Book Two of the McKay's by Hestand, Rita
The Reproductive System (Gollancz SF Library) by Sladek, John
The Telling by Eden Winters
Fast, Fresh & Green by Susie Middleton
Happy Birthday to You (Birthday Trilogy, Book 3) by Brian Rowe
Claiming Olivia II by Yolanda Olson
The Rainy Day Killer by Michael J. McCann
Iris Johansen by The Ladyand the Unicorn
Our partner