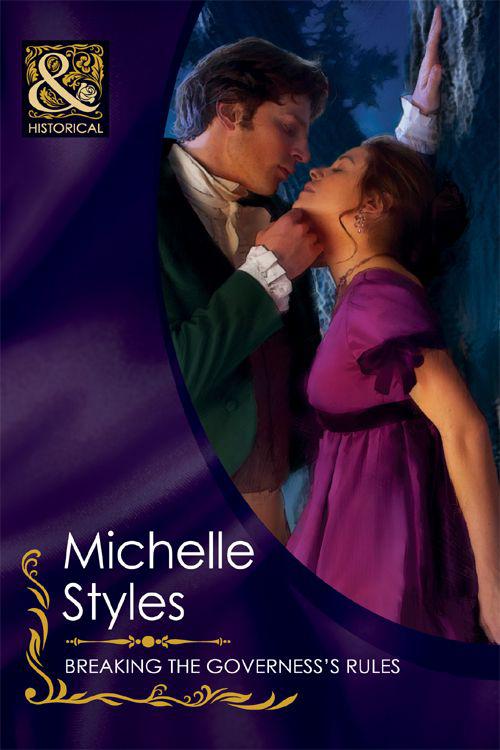 ‘Miss Louisa Sibson.’
The three words were said in a warm, masculine voice—but they were enough to send an ice-cold chill down her spine.

Her hand froze. She kept her gaze downcast and willed the stranger to go. She could not be so unlucky as to encounter Jonathon Ponsby-Smythe here. In Newcastle. He was a habitué of London clubs, fashionable salons and Almack’s—not provincial concerts with second-rate singers.

Louisa forced the breath into her lungs. This man, this friend of Miss Daphne’s nephew, was someone else. This man was not the man who had destroyed her life.

And she was no longer the same naive girl who had believed a man’s whispered endearments of eternal love.

What was the proper etiquette for greeting the man who had taken your innocence and destroyed your girlish dreams?

When I first started writing COMPROMISING MISS MILTON, Daisy’s friend Louisa Sibson was supposed to be a throw-away character. A few lines, nothing more. However, Louisa had other ideas. She arrived, and refused to budge from my mind. She was determined to have her story told. Luckily my editor agreed with her, and allowed me to write Louisa and Jonathon’s story. Because Mrs Blandish and her daughters were also very determined characters, they also had a part to play in this story. Hopefully you will enjoy it.

Louisa’s story was inspired in part by reading
Other People’s Daughters: the Life and Times of the Governess
by Ruth Brandon,
The Victorian Governess
by Kathryn Hughes, and Miss Weeton’s
Journal of a Governess,
both volumes: 1807–1811 and 1811–1825. If you are interested in the actual experiences of governesses, the books are excellent sources.

Born and raised near San Francisco, California,
MICHELLE STYLES
currently lives a few miles south of Hadrian’s Wall, with her husband, three children, two dogs, cats, assorted ducks, hens and beehives. An avid reader, she became hooked on historical romance when she discovered Georgette Heyer, Anya Seton and Victoria Holt one rainy lunchtime at school. And, for her, a historical romance still represents the perfect way to escape. Although Michelle loves reading about history, she also enjoys a more hands-on approach to her research. She has experimented with a variety of old recipes and cookery methods (some more successfully than others), climbed down Roman sewers, and fallen off horses in Iceland—all in the name of discovering more about how people went about their daily lives. When she is not writing, reading or doing research, Michelle tends her rather overgrown garden or does needlework—in particular counted cross-stitch.

Previous novels by the same author:

TAKEN BY THE VIKING

A CHRISTMAS WEDDING WAGER
(part of
Christmas By Candlelight)

A QUESTION OF IMPROPRIETY

BREAKING THE GOVERNESS’S RULES
features characters you will have already met in
COMPROMISING MISS MILTON.

To India Grey,
who has the unfailing knack of brightening my day.

P
ain consumed Jonathon Ponsby-Smythe. Every breath seared his lungs. His limbs refused to obey his command. Jonathon fought against it and the heavy blackness that called to him and invited him into its embrace—to death. Jonathon knew he was far from ready to die. His life mattered.

‘Louisa, Louisa.’ The words escaped from his lips, a plea for life, for salvation. With Louisa at his side, he
could
accomplish anything. With his last ounce of strength, he lifted his hand towards a shadowy female shape. ‘Louisa, help me. I want to live.’

‘Jonathon, oh, my poor, brave Jonathon, you must rest. You are not allowed to die,’ an overly sweet voice cried.

‘Louisa … not you …’ he croaked at the woman with her English-rose complexion and immaculately golden curls. ‘Get her now! Louisa!’

‘Who is this Louisa?’ the woman asked, less sugary and far more imperious. ‘Should I know her?’

‘He wants that little nobody, the governess, Louisa Sibson,’ the brisk tones of his stepmother rang out. ‘Put her from your mind, Clarissa. She is beneath your notice.’

‘Not governess. Fiancée. Find her.’ Jonathon ignored the sudden stab of pain that racked him and forced his body to an upright position. He stared at the pair. They would do as he commanded. ‘I want her here. Now. Louisa. Must marry.’

‘Jonathon is marrying the governess?’ Clarissa shrieked. ‘But you said … Mama said … It is all arranged and has been since we were babies.
I
am the right wife for him.’

‘Have licence. Marry Louisa today.’ Jonathon frowned. How much time had he lost to the black pain? A few hours? Days? He shook his head to clear his mind. ‘Tomorrow.’

‘He has hit his head, Clarissa, and raves. A good wife knows to allow these indiscretions. Men are like that,’ his stepmother said. ‘Jonny is lucky to be alive, to be given a second chance. I pray he makes a better fist of it.’

‘But this Louisa? I will not have her here. This is my house! I forbid it! He is not allowed to be in love with her!’

‘He will forget her. She is nothing. A trollop who had ideas bigger than her station.’ His stepmother snapped her fingers. ‘Patience and fortitude will win the day, my dear. Remember that and he will always come back to you.’

Jonathon summoned the last of his strength. Forget
Louisa? Never. Louisa was his life. His lodestar. ‘Find Louisa.’

Jonathon searched his memory and met the heavy curtain of blackness. Something had happened to Louisa. Dead? Injured? His fault? Pain shot through him as Jonathon rejected the notion. She had left. They had quarrelled and she had refused to come with him in the curricle, said that he drove too fast. So he had driven the horses faster to show her. ‘Clarissa, fetch Louisa to me. Now.’

Clarissa backed away and glanced over her shoulder. ‘She is not here. I don’t know where she is. But I promise I will see you back to health, Jonathon. Then. then you can find her if you wish.’

‘Find her!’ He bit his lip and pain pounded on his lungs and skull. ‘Please.’

‘Jonathon,’ his stepmother said in her brisk voice, ‘Louisa Sibson is not coming. Not now. Not ever. Clarissa will nurse you back to health.’

‘Never?’ Jonathon searched his memory. Had he gone back and insisted that Louisa come with him? He had wanted to. Louisa hadn’t been in the curricle when it had overturned, had she? Every breath was fire and the pain in his head screamed worse than ever. He felt the memory of the crash slip away from him and become lost. ‘Was she in the curricle? Clarissa, you would not lie to me. Did I kill her?’

Clarissa turned away, sobbing, unable to meet his eyes.

‘No one is lying, Jonny,’ his stepmother said with great precision.

‘Venetia, where is Louisa? What has happened to her?’

‘She has gone for ever from our lives, Jonny. You had to indulge in your needs and to go against my advice.’

His stepmother was silent for a long moment. ‘You will not see her again. Jonathon, you were spared. No one but a fool would have left a cart on a blind bend.’

Louisa had died in the accident. His stepmother had admitted it in that roundabout way of hers. The knowledge hammered against his chest. The one person in the world he loved, that bright shining girl, dead. He had sworn to protect her, but instead he had destroyed her.

‘It would have been better if we’d never met.’

‘You can’t turn back the hands of time, Jonny.’ His stepmother gave him a fierce look. ‘You can only go forwards. It was providence that led you here to Clarissa’s. If the farm manager had not found you, I shudder to think.’ She put a cool hand on his shoulder. ‘You have everything to live for.’

Jonathon collapsed against the linen-covered pillows and willed the darkness to take him to Louisa. His body refused to die.

He turned his head and met his stepmother’s icy gaze. ‘You are wrong, Venetia. Without Louisa, I am beyond redemption.’

‘M
iss Daphne Elliot.’ The three words were said in a warm masculine voice, but they were enough to send an ice-cold chill down Louisa Sibson’s spine.

Her hand froze on the soft folds of Miss Daphne Elliot’s woollen shawl. Louisa kept her gaze downcast and willed the stranger to go. She could not be so unlucky as to encounter Jonathon Ponsby-Smythe here. In Newcastle. He was an
habitué
of London clubs, fashionable salons and Almack’s, not provincial concerts with second-rate singers. Louisa forced the breath into her lungs. This man, this friend of Miss Daphne’s nephew who had sponsored the concert was someone else. This man was not the man who had destroyed her life. And she was no longer the same naïve girl who believed a man’s whispered endearments of eternal love.

Across a War-Tossed Sea by L.M. Elliott
Edge of Danger (Edge Security Series Book 3) by Loye, Trish
The Lawless Kind by Hilton, Matt
Saved and SAINTified by Laveen, Tiana
The Best Week of My Life by Williams, Suzanne D.
Wyrd Calling (Wyrd Bound Book 1) by Shen Hart
The Pegnitz Junction by Mavis Gallant
Virgin Earth by Philippa Gregory
24 Declassified: Head Shot (2009) by David Jacobs
The Edge of the World by Kevin J. Anderson
Our partner