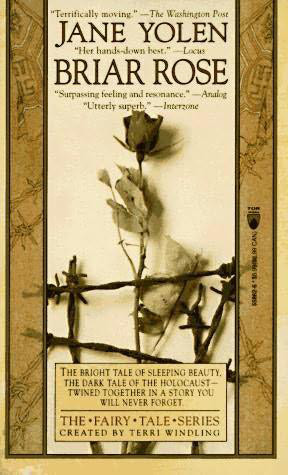 THE DARK TALE OF THE HOLOCAUST-

TWINED TOGETHER IN A STORY YOU

. . . Around the castle there grew a hedge of thorns, which every year grew higher, and at last there was nothing more to be seen, not even the flag upon the roof. But the story of the beautiful sleeping princess, Briar Rose, went about the country so that from time to titne the King's sons came and tried to get through the thorny hedge ...

So goes the German fairy tale of Briar Rose, the

Sleeping Beauty ... an old, old tale, yet so potent that few among us do not know it today. Novi one of America's most celebrated writers tells it afresh, set this time in forests patrolled by the German army during World War 11-a tale with no guarantee of an ending that reads they lived happily ever after.

A young American journalist is drawn to

Europe and to the past as she investigates the mystery of her grandmother's life. From her grandmother she inherited a silver ring, a photograph, and the traditional tale of Briar Rose: clues that will ultimately lead her to a distant land and an astonishing revelation of death and rebirth.

Sleeping Beauty, is indeed familiar-yet such is a master storyteller's skill that along the way we learn the tale anew. This is a tale of life and death, of love ar i hate, despair and faith. A tale of castles and thorns and sharp barbed wire.

This is Briar Rose.

"In a better world we shall heariane Yolen's tales with Oscar Wilde's, Hans Christian Andersen's, and Charles Perrault's over a winter's eve of ten thousand years. "- Gene Wolfe THE FAIRY TALE SERIES

ONCE UPON A TIME..

... fairy tales were written for young and old alike. It is only in the last century that they have been deemed fit for children and stripped of much of their original complexity, sensuality, and power to frighten and delight.

Tor Books is proud to present the latest offering in the Fairy Tale Series-a growing library of beautifully-designed original novels by acclaimed writers of fantasy and horror, each retelling a classic tale such as Snow

The Sun, the Moon, and the Stars by Steven Brust

The Nightingale by Kara Dalkey

With thanks for permission to quote from the follovAng books: From Spells of Enchantment by Jack Zipes. Copyright Q 1991 by Jack Zipes.

Used by permission of Viking Penguin, a division of Penguin Books USA Inc.

From About the Sleeping Beauty by P.L. Travers. Copyright Q 1975 by P.L.

From "Briar Rose" from Transformations by Anne Sexton. Copyright 0 1971

by Anne Sexton. Reprinted by permission of Houghton Mifflin Company. All rights reserved.

TORO is a registered trademark of Tom Doherty Associates, Inc.

FOR CHARLES AND MARYANN DE LINT

SCANLON FOR THEIR RESEARCH HELP. ANY mis-

TAKES MADE IN THE PRESENTATION OF THAT MATERIAL ARE

". - . (B)oth the oral and the literary forms of the fairy tale are grounded in history: they emanate from specift struggles to humanize bestial and barbaric force5~ which have terrorized our minds and communities in concrete ways, threatening to destroy free toil/ and human compassion. The fairy tale sets out to conquer this concrete terror through metaphors. "

There is no satisfactory equivalent to the German word mirchen, tales of magic and wonder such as those collected by the Brothers

Grimm: Rapunzel, Hansel & Gretel, Rumpelstiltskin, The SLY Swans, and other such familiar stories. We call them fairy tales, although none of the above stories actually contains a creature called a "fairy."

They do contain those ingredients most familiar to us in fairy tales: magic and enchantment, spells and curses, witches and trolls, and protagonists who defeat overwhelming odds to triumph over evil.

J. R. R. Tolkien, in his classic essay "On Fairy-Stories," offers the definition that these are not in particular tales about fairies or elves, but rather of the land of Faerie: "the Perilous Realm itself, and the air that blows in the country, I will not attempt to define that directly," he goes on, "for it cannot be done. Faerie cannot be caught in a net of words; for it is one of its qualities to be indescrib-able, though not imperceptible."

Fairy tales were originally created for an adult audience i The I tales collected in the German countryside and set to paper by ffie Brothers Grimm (wherein a Queen orders her stepdaughter, Snow VA ' iite, killed and her heart served "boiled and salted for my dinner") Were published for an adult readership, popular, in the age of Goethe and

Schiller, among the German Romantic poets. Charles Perrault's spare and moralistic tales (such as Little Red Riding Hood who, in

the original Perrault telling, gets eaten by the wolf in the end having the Al sense to talk to strangers in the wood) was written the court of Louis XIV; Madame d'Aulnoy (author of The White C

With the Age of Enlightenment and the growing emphasis rational and scientific modes of thought, along with the rise fashion of novels of social realism in the nineteenth century, litera fantasy went out of vogue and those stories of magic, enchantme heroic quests, and courtly romance that form a cultural herita thousands of years old, dating back to the oldest written epics a further still to tales spoken around the hearth-fire, came to be se as fit only for children, relegated to the nursery like, Profes!

Tolkien points out, "shabby or old fashioned furniture ... primaz because the adults do not want it, and do not mind if it is misuse(

And misused the stories have been, in some cases altered greatly to make them suitable for Victorian children that the origi:

tales were all but forgotten. Andrew Lang's Tam Lin, printed in I colored Fairy Books series, tells the story of little Janet wh(

playmate is stolen away by the fairy folk-ignoring the origir darker tale of seduction and human sacrifice to the Lord of Hell, the heroine, pregnant with Tam Lin's child, battles the Fairy Qu(

Venice in the sixteenth century, in which the enchanted princes impregnated as she sleeps, waking to find herself the mother twins. The Little Golden Book version of the Arabian Nights resi bles not at all the violent and sensual tales actually recounted Scheherazade in One Thousand and One Nights, shocking nineteex century Europe when fully translated by Sir Richard Burton.

for the young and innocent . . ." said the Daily Mail.) wealth of material from myth and folklore at the disposa the story-teller (or modern fantasy novelist) has been described giant cauldron of soup into which each generation throws new of fancy and history, new imaginings, new ideas, to simmer al, with the old. The story-teller is the cook who serves up the comr gredients in his or her own,individual way, to suit the tastes Briar Rose

new audience. Each generation has its cooks, its Hans Christian Andersen or Charles Perrault, spinning magical tales for those who will listen-even amid the Industrial Revolution of the nineteenth century or the technological revolution of our own. In the last century, George MacDonald, William Morris, Christina Rossetti, and Oscar Wilde, among others, turned their hands to fairy stories; at the turn of the century lavish fairy tale collections were produced, a showcase for the art of Arthur Rackham, Edmund Dulac, Kai

In the early part of the twentieth century Lord Dunsany, G. K.

category title "Adult Fantasy"-as well as works published in the literary mainstream that could easily go under that heading: John Barth's

It is not surprising that modern readers or writers should occasionally turn to fairy tales. The fantasy story or novel differs from novels of social realism in that it is free to portray the world in bright, primary colors, a dream-world half remembered from the stories of childhood when all the world was bright and strange, a fiction unembarrassed to tackle the large themes of Good and Evil, Honor and Betrayal, Love and Hate. Susaon Cooper, who won the

Newbery Medal for her fantasy novel The Grey King makes this comment about the desire to write fantasy: "In the Poetics Aristotle said, 'A likely impossibility is always preferable to an unconvincing possibility.' I think those of us who write fantasy are dedicated to making impossible things seem likely, making dreams seem real. We are somewhere between the Impressionist and abstract painters.

Our writing is haunted by those parts of our experience which we do not understand, or even consciously remember. And if you, child or adult, are drawn to our work, your response comes from that same shadowy land."

All Adult Fantasy stories draw in a greater or lesser degree from traditional tales and legends.

that material, such as J. R. R. Tolkien's use of themes and ima, from the Icelandic Eddas and the German Niebelungenlied in The of the Rings or Evangeline Walton's reworking of the stories from

Welsh Mabinogion in The Island of the Mighty. Some authors the language and symbols of old tales to create new ones, suc the stories collected in Jane Yolen's Tales of Wonder, or Pat McKillip's The Forgotten Beasts of Eld. And others, like Robin Mc ley in Beauty or Angela Carter in The Bloody Chamber (and the rn

The Company of Wolves derived from a story in that collection) their stories directly on old tales, breathing new life into them, presenting them to the modem reader.

The Fairy Tales series presents novels of the later sort-nc directly based on traditional fairy tales.

Each novel in the seri based on a specific, often familiar, tale-yet each author is fre retell that story in his or her own way, showing the diverse w modern story-teller can make of traditional material. In the (