Bride of the Rat God 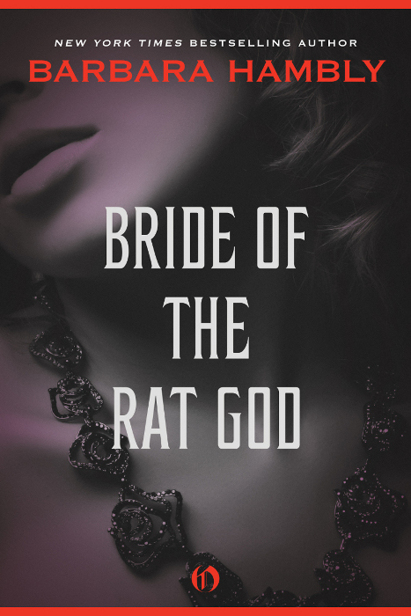 Dedicated, with all my love, to

and the Eternally Beautiful Kismet,

without whose love and company

it would never even have occurred to me

to write this book.

Special thanks are due to Dawn Jacobsen and Marc

and Elaine Zicree, for the use of their libraries;

to Doug Heyes, for indulging my questions about old

times and his father’s career; to Bob Birchardt, for

letting me pick his brains about antique cinematography;

to the staff of the Hollywood Studio Museum; to Margaret

Carey, for starting it all; and especially to Laurie Perry, for

all her help in shaping this book into what it is.

All quotes below chapter headings are from the I Ching.

A BIOGRAPHY OF BARBARA HAMBLY

ONE
WATER OVER THUNDER

Do not go anywhere...

Stopped amid much confusion and milling about—

it is best to form a partnership...

Marriage for the Maiden is not yet in the signs—

I
T WAS NOT
that there were no warnings.

But for a long time no one believed.

Exhausted, the girl stumbled to a halt. Though clouds were gathering fast over the ebony sky, sufficient moonlight lingered to transform the low ground fog into a chill silver lake that dampened the dark silk of her dress and made it cling with the clammy grip of a spider’s web. Her black hair lay in a disheveled cloak about shoulders blanched chalky by the dead light. The blood on her hands showed black as well.

She swung around, startled, enormous eyes straining to pierce fog and darkness, and one hand stole to her throat. In the heavy necklace she wore a jewel flashed, an enormous opal white as the fog. When she took her hand away, the blood on her fingers left three streaks on her alabaster skin.

She began to run again, desperately now, like one who realized there was nowhere to run, no hope of escape.

At the cliff’s edge she could run no farther. Dark gaped before her suddenly, and she staggered in the tangle of dead vines, staring into the abyss. Her hand fluttered to her mouth; she turned again as if to run back, but a broken branch underfoot gripped the torn silk of her gown like the hand of death. She tugged, sobbing, and in that moment dark forms materialized behind her from the ghostly scrim of mist. They were the men who had pursued her from the cluttered brightness of her lover’s bedroom, where lamplight gleamed on a dead man’s pooling blood. They were retribution.

The girl sprang back, hands thrust out in wordless terror and denial. Under one high satin heel the cliff edge gave. She grabbed as she fell at the gnarled knots of an old tree root, and for an eternal moment her body dangled like a glimmering pendant above the tossing lake of vapor. The men waded through the ferns, but the black vines clung to their feet, pulling them back as they reached for the bloodied white hands.

Her grip slithered from the wet roots as their fingers brushed hers.

Later they found her in the black jumble of rock, shattered branches, and steel-cold water, the white gem of her necklace shining eerily, like a fragment of alien moon.

“Where on earth did you film that?” Norah Blackstone reached for the curved Cubist rainbow of the brazen door handle, and her sister-in-law put a small, staying hand on her wrist.

“Darling, don’t! You can’t go out ahead of me or even
with
me. We filmed it up at Big Bear Lake, except that first part near the house—that’s the Burbank golf course. I thought I’d
freeze
to death in that awful stream, but Campbell insisted. He’s a fiend for authenticity. Thank
God
Charlie had a flask on him, but I swear they should arrest that bootlegger of his for poisoning. Stand over there and wait just one minute, darling.”

Norah stepped obediently back. Her diminutive companion drew a deep breath, shook back her torrent of dark hair—augmented for the occasion to match the film—and flung wide the door into an explosion of flash powder and journalistic Hollywood adjectives. “Stupendous!” “Chrysanda, you’ve never been more stunning!” “Gorgeous...” “Ravishing!” “Fatal beauty at its most devastating!”
“Kiss of Darkness
is a picture that shakes you to the soul!”

Norah, reflecting that her soul hadn’t been shaken in the least, waited until the voices had drawn away a little from the door, then stepped forth herself with what discretion was possible. Chrysanda Flamande, raven coiffure a splendor of suggested disarray and the cold white gems of her necklace glistening on a breast like Carrara marble, had taken up a position in front of a gleaming bronze warrior, carefully chosen so no photograph would include a door bearing the inscription
LADIES LOUNGE
. Her kohl-dark eyelids lowered, her red lips curved in her famous enigmatic smile, and she stood with one hand on her black silk hip and the other raised as if to support her back-tilted head. Flash powder coruscated once more, leaving a haze in the air like a battlefield and calling echoes from the diamonds that thickly adorned the white wrists, the prisoned midnight of her hair.

“Miss Flamande, is it true your next picture is going to be with Valentino?” “Miss Flamande, how did you feel to be playing a scene so similar to the actual death of your fianceé the Count d’Este?”

Chrysanda Flamande’s dark eyes widened, seeming to burn with emotion under the hundred minuscule electric bulbs concealed in the arched ceiling. “An artist uses everything that befalls her,” she said, her deep, husky throb quite different from the child-sweet tones in which she’d spoken to Norah moments before. “Grief as well as ecstasy. Lucien was killed in a tragic and terrible accident rather than taking his life like the man in the film, yet it was I who found his poor body sprawled in a pool of blood. And yes, the horror, the despair I felt then was in my mind as I enacted that scene. It is always in my mind. Sometimes I think I shall never be free of it.”

She passed a bejeweled hand across a brow suddenly twisted with pain. “The director did not know, naturally; the scenarists did not know. I could not tell them, knowing that any change would lessen the impact of the film. But I knew. And I felt. Yet unless one is able to devour life in all its glory, to radiate it forth again as art, no matter how great the pain, one is nothing but a sham.”

From a respectful distance—namely, out of camera range—Norah shook her head at the aptness of that final phrase. “Nothing but a sham” accurately summed up the mythical Lucien d’Este’s existence and, in fact, most of the studio-written biography of Chrysanda Flamande. With her soul-devouring eyes and nightshade hair, her slender body and restless, ethereal movements, she certainly looked as if she could have been born of a Greek concubine and a French soldier in the harem of the Grand Turk of Constantinople a solid nine years later than her actual birth date. There were still times when Norah didn’t know whether to be appalled or to laugh.

Mostly she found herself laughing.

Two months earlier she had not thought she would ever laugh again.

Sixty days ago, almost to the day, she had seriously considered stealing a razor from her then-employer’s son, filling the upstairs bathtub with hot water, lying down in it, and cutting her wrists. According to classical authors, it would not have taken long to bleed to death and would not have hurt much.

That had been on her twenty-sixth birthday. She hadn’t known then how she was going to endure another gray Manchester winter, another year of pain. Another year of Mrs. Pendergast’s hypocrisy, pettiness, and spite.

Whatever else could be said of her, her beautiful sister-in-law—vain, selfish, and apt to float through life on a sea of pink gin and discarded lovers—had rescued her from that, and the gift of renewed laughter was among the most precious she’d ever received.

“One owes it to oneself, as the poet says...” The throbbing voice broke into her reverie once more, “...to drink life’s wine to the very lees, to grasp life’s roses, never heeding the thorns...”

Chrysanda—whom Norah couldn’t think of by any other name than Christine, which was how she’d first known her—passed under the baroque arch and down the stairs toward the lobby, barely to be seen among the mob of reporters. Norah smiled a little and followed, admiring in passing the Grauman Million Dollar Theater’s very un-Manchesterian decor of Shakespearean murals, gilded arabesques, and curlicued niches containing statues of warriors, cowboys, and what looked like dance hall girls.

Her aunts would have told her the gratitude she felt toward Christine was perfectly proper... but ought not go further than that. One shouldn’t, of course, actually
like
THAT kind of woman...

Norah shook her head again, this time at her own weakness of character.

Mrs. Pendergast had not approved of the cinema; thus Norah, when she came down into the lobby in her sister-in-law’s wake, recognized almost none of the faces in the crowd that jostled for position around the staggering buffet at the far end.

Mary Pickford she did recognize, though her ringlets were upswept this night to alter the girlish sweetness into adult and shining intelligence.
Pollyanna
—the last film Norah had seen—had been made four years earlier and even then the actress couldn’t have been as young as she had appeared on the screen. Douglas Fairbanks, too, she identified immediately, mostly by the way he moved. Norah smiled again at herself—she was probably the only person in the civilized world who hadn’t heard of their marriage.