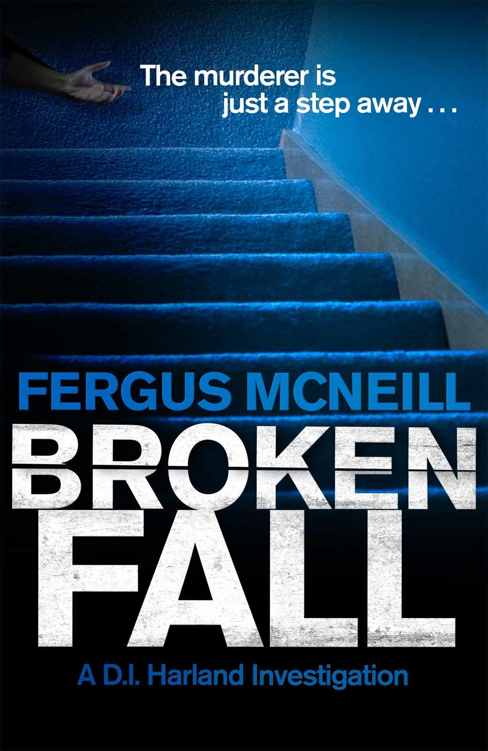 Read on for an extract from
Cut Out

Fergus McNeill has been creating computer games since the early eighties, writing his first interactive fiction titles while still at school. Over the years he has designed, directed and illustrated games for all sorts of systems, including the BBC Micro, the Apple iPad, and almost everything in between.

Now running an app development studio, Fergus lives in Hampshire with his wife and teenage son.

To find out more about this and upcoming books and talk to Fergus about his writing, you can read his blog at
www.fergusmcneill.blogspot.co.uk
, like his Facebook page at
www.facebook.com/fergusmcneillauthor
or follow him on Twitter at
twitter.com/fergusmcneill
.

First published in Great Britain in 2015 by Hodder & Stoughton

The right of Fergus McNeillto be identified as the Author of the Work has been asserted by him in accordance with the Copyright, Designs and Patents Act 1988.

Now the only sound was the ticking of the clock, stark against the stillness of the house. It was that heavy, museum kind of quiet that filled the homes of elderly people, with their unyielding old furniture, and their thick carpets that leeched noise from the air as though it were moisture. There was no background hum of electrical appliances, no TV murmuring in a nearby room, just the steady ticking to prove the silence.

Standing motionless in the darkened hallway, the figure exhaled slowly, then turned around, moving with soft footsteps towards the front of the house. A dim shaft of light from the street lamp outside slid in along the floor, paused, then retreated again, accompanied by the sound of a door pulled shut too carefully, and the guilty snick of the latch.

The air settled once more. In the gloom, the ticking continued, and the ornate minute hand clicked another moment closer to its counterpart by the XII at the top of the polished brass face.

A red light flared suddenly, bathing the wall behind the telephone table in a ruddy glow, revealing the incongruous plastic box with its brightly illuminated button.

‘Hello? Mr Errington?’ The voice crackled, thin but insistent. ‘Hello? Is everything all right?’

There was an expectant pause, and a faint hum rose from the speaker grille on the box, expanding to fill the hallway.

‘Are you there, Mr Errington? This is the Help Line service.’

There was a note of concern in the voice now, and it spoke louder, the words echoing back from the kitchen and the upstairs landing.

‘Please, Mr Errington, can you hear me? Are you all right?’

At the foot of the stairs, Mr Errington lay still and silent. He might have been sleeping, except that the red light from the Help Line box was reflected in his staring open eyes.

‘Okay, Mr Errington. I’m going to see about getting somebody over to check on you. It won’t be long …’

The red light winked out. With a slight crackle of static, the voice was gone, leaving nothing …

… except the ticking of the clock.

Detective Inspector Graham Harland yawned as he turned the wheel, cold headlights cutting through the night to illuminate the impressive old residences that slept near the top of the rise. Granby Hill was steep and narrow, with expensive townhouses and apartment blocks pressed in tight against the narrow pavements, choked with parked cars wherever they could be squeezed in. About halfway down, he saw the white gable walls of the surrounding villas bathed in blue by flashing lights, and the stark yellow markings of the ambulance, jammed in across the end of a driveway at an awkward angle. This was the place all right.

There was nowhere to park, so he made a right just before the property and drove up a side street, walled in on the left where the ground fell away towards the river, and eventually tucking the car in beside a terrace of beautiful old stone houses. Getting out, the chill breeze whipped at him, ruffling his short, dark hair and making him shiver, but he still took a moment to walk over to the wall and gaze out across the lights of the city below. His own house was down there, somewhere round to the left, but there would be no welcoming glow from his windows – the place was in darkness. Sighing, he pulled his jacket closed around his lean frame, then hunched his shoulders against the cold and hurried down the slope towards the flickering blue.

The uniformed officer at the gate stepped forward with a deterrent scowl as he approached but relaxed when Harland held up his warrant card.

It had been almost a month since his transfer to Bristol CID, though he’d lived here in the city for years. Now, his rank and experience wouldn’t count for so much – he was the new boy, and it would take time to get to know his new colleagues and earn their trust. He glanced back over his shoulder at the illuminated windows in the apartment block behind them.

‘Plenty of twitching curtains,’ he noted, wondering if any of the silhouetted figures actually knew their neighbour. ‘We must have woken half the street.’

‘Seems nice enough,’ he agreed, then turned back with a thin smile. ‘What’s your name, by the way?’

‘Good to know you, Lawson.’ Harland nodded to him. ‘Tell me, is DS Linwood here yet?’

‘He’s inside.’ The officer inclined his head towards the house. ‘Got here about ten minutes before you did.’

‘Thanks.’ Harland nodded, jamming his hands in his pockets as he walked through the gateway. ‘I’ll be seeing you around.’

The front garden was given over to a smooth cobbled driveway, lined with well-tended bushes and flowers; beyond it, the neat little two-storey house, with its pale walls and chimneys, and trellises for climbing plants. Set back into a cutting in the hill, it would have been charming under different circumstances – a desirable property in a desirable part of the city – but as Harland approached the open front door, he could already see the tragic little bundle lying at the foot of the stairs, the shock of white hair, bright against the dark carpet – the sad centre of attention.

‘All right, sir?’ One of the figures in the hallway was walking towards him, a wiry little man with short brown hair and quick, dark eyes. DS Jack Linwood was proving to be a competent colleague, but sometimes his relentless good cheer felt inappropriate, particularly at moments like this.

‘Hello, Jack.’ Harland glanced down the hallway. ‘So, what have we got?’

‘Accident – pretty straightforward by the look of it,’ Linwood jerked a thumb over his shoulder, then grinned apologetically. ‘Sorry you got dragged out for nothing.’

‘Well, I’m here now …’ Harland rubbed the back of his neck to ease the stiffness. ‘Talk me through it.’

Lying on its front, the body looked terribly frail, a bony frame beneath sky-blue pyjamas and a navy silk dressing gown. Old hands, with their swollen joints and papery skin, grasped ineffectually at the carpet, while one mottled foot trailed, bare and pale, the fallen dark leather slipper resting on the bottom step.

‘Albert Errington, seventy-nine, lived alone.’ Linwood nodded at a walking stick, propped up against the telephone table, then pointed towards the upper floor, where a flat metal track led up to a waiting stairlift. ‘We’ve got his stick, and that chair contraption up there, so he’s probably not too good on his feet.’

Harland squatted down beside the body. Albert hadn’t been dead long – beneath the thin, white hair, his eyes were still bright and clear, staring out across the floor, his mouth open as though about to speak.

‘Well, we found him just like this, at the bottom of the stairs,’ Linwood explained.

Harland’s gaze travelled slowly across the body and up the straight flight of stairs to where the mechanical chair was waiting. Just where it should have been, if the old man had been upstairs – Linwood’s explanation made sense.

He got to his feet with a sigh.

‘How long do they reckon he’s been lying here?’

‘Not long,’ Linwood replied. ‘Two hours, maybe three at the most.’

‘Really?’ Harland looked up. ‘How did we find out about it so quickly?’

‘Sorry, didn’t I say? Mr Errington had one of those Help Line pendants …’ Linwood bent down and gently pulled back the pyjama collar, revealing a smooth white cord draped around the old man’s neck. Attached to it was a small plastic fob, with a single red button, recessed to avoid accidental presses. ‘You push the button if you get into difficulties or have a fall or anything – and it activates a kind of remote alarm. The service is monitored by a company, and they get in touch to see if you’re all right. If they can’t reach you, they send someone out to check.’

‘Well, there’s a care agency involved,’ Linwood shrugged. ‘They sent one of their people – Brian, I think his name is. He’s outside with the paramedics if you want a word with him.’

Harland took a long look at the body, then nodded to himself.

Brian was leaning against the side of the ambulance, smoking a slender roll-up held between his thick fingers. Short and stocky, he wore a regulation blue polo shirt stretched across his barrel-chest, revealing powerful forearms wreathed in tattoos, but there was a kindly face beneath his crew cut. A grim-faced woman dressed in a green paramedic’s uniform stood nearby, scribbling something on to a form by the light from the driver’s door.

‘Brian? I’m DI Harland.’ He held out his hand, and waited while the other man leaned across to shake it. ‘I understand you were the one who found the body?’

‘Yeah, that’s right.’ Brian sighed, leaning back against the ambulance. ‘My office got a call from the Help Line people, and I’d just finished with another gentleman down in Ashton Gate so they told me to look in on Mr Errington.’ He paused to take a drag on the cigarette, then shook his head sadly. ‘Found him at the bottom of the stairs, poor soul.’

‘I saw.’ Harland nodded gravely. ‘Did you move him at all?’

‘Nah,’ Brian murmured. ‘I checked his pulse an’ all that, but his eyes were wide open, so I knew there weren’t nothin’ I could do for him. Phoned it in and they sent the ambulance.’ He inclined his head towards the medic, who glanced up from her paperwork and gave a slight nod.

Rise of the Sparrows (Relics of Ar'Zac #1) by Sarina Langer
Down and Dirty (Sons of Sinners Book 1) by Erika Reed
Tips on Having a Gay (ex) Boyfriend by Carrie Jones
Black & Blue: Where it all began…… (D.S Hunter Kerr) by Michael Fowler
Aphrodite's Hat by Salley Vickers
Rising Tides by Taylor Anderson
Rapture of Canaan by Sheri Reynolds
Ashton Memorial by Robert R. Best, Laura Best, Deedee Davies, Kody Boye
Over the Barrel by Breanna Hayse
Border of the sun by Aditya Mewati
Our partner