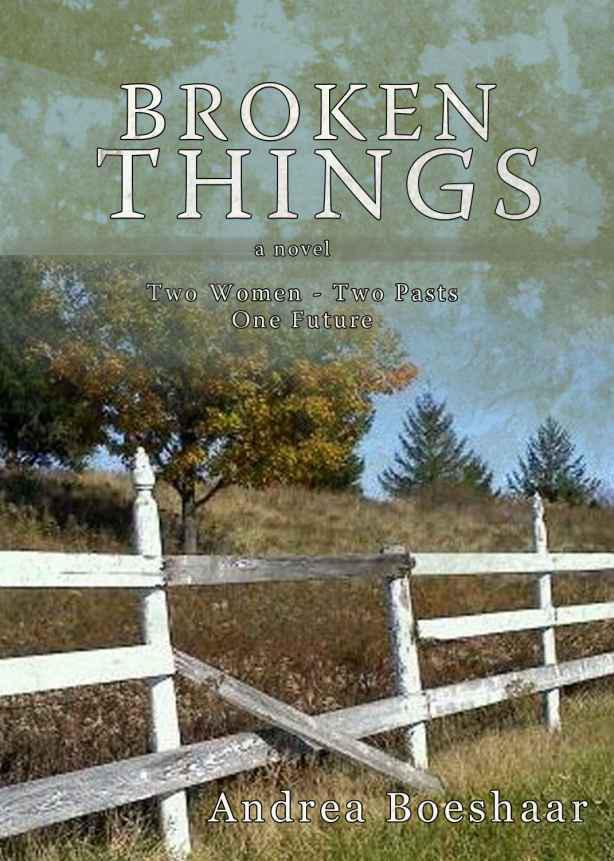 Revised from the original © 2003 by Andrea Boeshaar

All rights reserved. No part of this publication may be reproduced or transmitted in any form or by any means without written permission of the author.

This book is a work of fiction. Names, characters, places and incidents are either products of the author’s imagination or used factiously. Any similarity to actual people, organizations, and/or events is purely coincidental.

For more information about Andrea Boeshaar, visit the author’s website at:
www.andreaboeshaar.com

I believe the Lord gave me the idea for this story after I watched with a broken heart as several Christians gave up on their faith. They stumbled in their walk, got lost in the darkness, and figured there was no way back to Jesus. Worse, they believed God didn’t want them back because of their blemished pasts.

How wrong they were!

While it’s true that our actions, and the consequences thereof, are our responsibilities, our burdens to bear, it’s also true that God will take us and our hurtful pasts, and use them all together for His good (Romans 8:28). This truth in no way gives us a license to sin, but I have seen God take the pieces of a broken life, put them back together, and create a thing of extraordinary beauty―and one that’s of service to Him.

God really does use “broken things.”

So if you’re reading this with a wounded spirit and your outlook on life is bleak, be assured that there is hope through Jesus Christ and that you are precious in His sight. Don’t let your tarnished past stand between you and shining future.

You are valuable, priceless, and you are loved.

There is a way back to Jesus.

He’s waiting for you with open arms.

Special thanks to Mac Lynch and The Wilds organization

for allowing me to use the lyrics to “Broken Things.”

To Sally and Ruth―

your comments and advice proved most valuable.

And to my husband Daniel―

for loving me and praying me through this project.

Broken and scattered for thousands and more.

Watch how He uses broken things.

Allie hated moving. It seemed as though she’d moved a hundred times in her life, although in reality it was probably more like twenty-five or thirty. Nevertheless, she despised the uprooting and transplanting, all necessary evils in the course of a lifetime. But at least she’d become an expert at the sorting and packing that went with relocating. Unfortunately, she hadn’t gotten the hang of throwing stuff away.

Lowering herself onto a crate, Allie surveyed the contents cluttering the attic of the two-story home she once shared with her son Nicholas. She had purchased this house after her husband Erich died eleven years ago, but now with Nick married and moved out it made no sense to keep it. Instead, Allie much preferred a condo along the Pacific coast. Besides, her consulting business took her away a lot of the time―another reason to leave a high-maintenance house and yard for a carefree condominium. However, since her next job, which was supposed to have taken her to Seattle, Washington, had been postponed indefinitely, Allie now had the time to sort and pack and…move.

She glanced around the hot, dry attic at the heaps and mounds still waiting to be sifted through.
Lord
, she prayed,
please give me wisdom. I want to keep it all, but I know that’s impossible.
Leaning over, she picked up a warped tennis racket. No need to keep this…

The door below creaked open. “Hey, Mom, you up there?” Nick’s soft but masculine voice wafted up the attic stairwell.

“Yep.” Standing, Allie crossed the dusty, wood-planked floor and met her son on the landing. His face and sandy-blond hair glistened with perspiration from hauling boxes into the rented truck.

“What do you want to do with this?” He handed her a shoebox.

Allie opened its cardboard top and peered at the photos inside. “Where did you find it?”

“On the shelf in your bedroom closet. It was in the bigger box with my projects that you’ve saved through the years.” He grinned and a waggish gleam entered his brown eyes. “Just for a laugh, Jennifer and I started rummaging through the pictures I made when I was a kid and we found the shoebox. You’re quite the packrat, Mom.”

“Oh, hush.” She smiled and flipped through several faded photographs, when one caused her heart to skip a beat. Gently lifting it, she stared hard at the four people in the picture.

“Who are they?” Nick peered over the top of the photo in her fingers.

“This is me when I was nineteen.” She pointed to the teenager with long, blond hair, parted in the middle. “I’m standing next to...Jack Callahan.” She whispered the name.

“The policeman?” Nick turned the picture his way.

Allie nodded and a rush of questions flew into her mind. Where was he now? What was he doing? Was he happy?

Over the course of the last three decades, Allie had severed ties and burned bridges, deciding that her life in the Midwest was better forgotten. However, she’d heard Jack had gotten married, become a father, and had been divorced, all within eighteen months’ time. That was some twenty-five years ago, but Allie still recalled how the news had shocked her.

“Is he a friend or family member?” Nick wanted to know.

“Friend. That is, he
was
a friend.” Nostalgia enveloped her along with pangs of regret. “He was a good friend.”

“Who are the others?”

“Wendy Chadwyk and Blythe Severson…just look at that picket sign Wendy’s leaning against.” Allie paused and sadly shook her head. “I don’t even know where they are or what they’re doing now. The three of us girls were rather troubled souls, and Jack kept us all in line. But we lost touch after I moved to California.”

Allie couldn’t seem to tear her gaze from the photograph, her eyes fixed on the handsome police officer whose arm was draped across her shoulders. And Wendy and Blythe…those two were the quintessential “flower children” of the ‘60s.

“Just look at us.” She shook her head and stared at the picture. “The three of us girls were so young, and we thought we knew
everything
. But the truth was we still had so much to learn.”

A swell of remorse lodged in her chest as remembrances emerged, unfettered for the first time in dozens of years. She had certainly made her share of mistakes. At age eighteen, Allie had been a new believer in Christ.. Within a year, she’d had some Bible studies but she couldn’t focus on growing spiritually because she’d been so consumed with all the turbulence in her life. When she left Oakland Park, Illinois, she hadn’t parted on a good note with anyone, be it family member or friend.

But what if she phoned Jack―and maybe looked up Wendy and Blythe while she was at it? And her stepfather and stepsisters―were they alive and well? Would any of them want to hear from her?

She had to go back…

Chicago. Allie hadn’t been here in over thirty years. Braking at a stoplight, she glanced up and down bustling Michigan Avenue through the windshield of the rented Chevy
Cavalier.
The tall buildings blocked out the sunshine, creating an almost cavernous effect, and yet it shouldn’t seem like such a wonder. It was the same with every big city and Allie should know. She’d seen them all.

But Chicago was different. She’d been raised here. Then, after her mother remarried, she moved Oakland Park, a small northeastern suburb.

The light turned green, and Allie stepped on the accelerator, nearing her destination―the Sheraton Hotel. It would be home for the next few days until the extended-stay suite became available. While she clearly knew that returning to Illinois was God’s will, one might question her decision. She had no family here. Her mother had died when she was a senior in high school, leaving Allie with her stepfather and stepsisters. Since she’d been so close to graduating, she convinced her natural father to allow her to finish school and stay with her stepfamily.

Regrettably, what had been a tumultuous home became a virtual battleground.

After her mother’s death, Allie’s emotions ran high. She missed her mother. So did her stepfather and stepsisters, but she’d never considered their feelings. Likewise, they didn’t know how to deal with their loss, their pain. Allie began arguing with her stepfather and over days and weeks the fights intensified until one night, in a fit of rage, he slapped her. Adding insult to injury, his daughters took his side. They said Allie deserved it. Later, all three apologized, but Allie refused to forgive them. She packed her bags and moved in with her friend Blythe Severson. Because of her age, however, her stepfather notified the police. Although she probably wouldn’t have gotten caught if the Seversons’ neighbors hadn’t summoned the cops due to the racket all the teens in the house at the time were making. Since Allie was deemed a “runaway,” she was taken into custody.