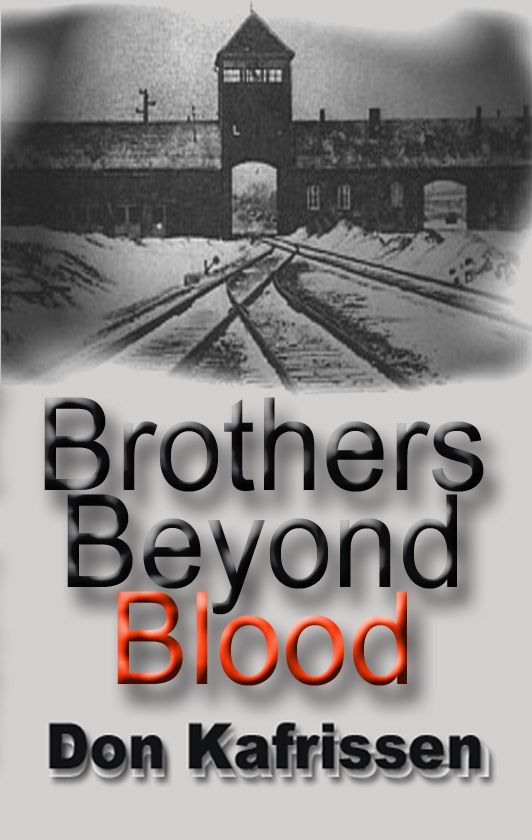 Can two young men who meet in a concentration camp become friends?

It’s possible and even probable. But what if one of them is a prisoner and the other is his guard?

Years after the end of WWII, when the two brothers Hans and Herschel Rothberg have passed on, a lawyer presents their surviving family with a letter, a document that completely turns their world upside down. This manuscript chronicles the relationship of two young men, boys actually, who are thrown together by their experiences in a Nazi concentration camp. It describes their amazing journey from the horrors of Kefferstadt to a Displaced Persons camp in Germany, and finally to the United States.

Herschel and Hans Rothberg were brothers in the truest sense of the word. Separately, they were doomed, but if they could find a way to work together, they just might be able to survive.

“I held my breath reading until the end! I absolutely could not put down this book until I found out what was going to happen to Herschel and Hans.”

J.M. Bolton author of “Alien Within”

“It’s so real, you feel like you’re actually there! What a great adventure. You couldn’t find two more unlikely allies, and yet Kafrissen makes it work!”

Marlene A Becker author of “The Deacon & the Demon”

“Brothers Beyond Blood tells the story of two German teen-aged boys enduring the horror of a World War II concentration camp, one a detainee and the other a guard.
Their friendship becomes their redemption during the final days of the Nazi regime. This is a must for young adult readers who will form an instant bond with the boys and their victory over evil.”

Jerry Cowling, author of “Lincoln in the Basement”

This is a work of fiction. Names, characters, places and incidents are either the product of the author’s imagination or are used fictitiously, and any resemblance to actual persons, living or dead, business establishments, events or locals is entirely coincidental.

A book from IDBPI published by arrangement with the author

IDBPI and the digital book logo are trademarks belonging to

The call came early in the morning from my sister Miriam. “Hullo,” I answered dully, not fully awake.

I licked my dry lips and sat up creaking. I blinked a few times trying to focus. “Yeah, Mim. I’m up. Not functioning yet, but up. What’s the matter?"

Even over the phone, I could hear her take a deep breath, “It’s Pop. He’s dead. A couple of hours ago. The hospital called me, but I had my phone turned off until just now.” I could hear her sniffling. She was speaking in a rush, trying to get it all out without me interrupting, “As soon as I turned my phone back on, there was a message. He died during the night. Oh, God, I should have been with him, but, Al, I’ve been there so much these last couple of weeks, and I just came home to try to get in a few hours sleep before going back. Oh, please don’t hate me, Al; I’ve been with him so much. Can you meet me here? Please come, Al. I need you here to help me. You know Sammy is no help and I ….”

I broke in as soon as I understood what she was trying to say. My father had died last night. Old Herschel Rothberg had kicked the bucket. “Take it easy, Mim. It’s all over now. Let me grab a shower and I’ll meet you at the hospital in an hour. I’ll call Sammy. You don’t have to.”

Son-of-a-bitch, so the old man finally cashed in his chips. Hell of a life, I thought. He and my Uncle Hans, what a couple of guys. Almost like a married couple.

My wife rolled over and without opening her eyes, she muttered, “Who was that, Al?”

“Nothing, Hon. Go back to sleep. I’ll tell you later.” And she did. My wife, Syl, was a doctor and didn’t get in until late most nights. It had become a minor sore spot with us over the last few months since she’d been transferred to the ER.

I showered and dressed before calling my brother Sammy. He lived in LasVegas, but he’d been here a month ago when the old man had taken a turn for the worse. He’d lasted a week and couldn’t stay. His job, he said. Some job, a dealer in Vegas. What kind of a job was that for a Jewish boy from Philly? With a sigh, I dialed his cell phone.

“Hey, Sammy. Just wanted to let you know that Pop passed away last night. We’ll schedule the funeral for a couple of days. Call me back when you get a chance.”

The phone went dead in my ear. I shrugged. Sammy and the old man never did get along and he was gone the minute he’d graduated from high school, hitchhiking to California and becoming a surf bum. That had developed into a job making boards, then film school and he made a couple of documentaries. One was about surfing in Mexico, and the next one was about sailing, I think. I kind of lost track of him for a few years. I’d heard through Mim that he’d been married, divorced, had a couple of kids, sold insurance, and had and lost a few other jobs.

I kissed my wife’s forehead and walked out to my car, which was parked in the driveway. The sun was just coming up. It was going to be another sunny and dry day here in Philly. I stopped at the nearest Starbucks and picked up coffees for Mim and me.

Her car was in the visitors’ lot at Beth Israel when I got there, though parked crooked, like she’d been in a hurry. Why she was rushing to see a dead man in a depressing hospital was beyond me. The place was just a pile of bricks dating from just after the war, though I really didn’t know which one. The paint was peeling over the doors and the floor tiles were a dull green. As I walked in, a barely coherent message was sounding over the squawk box. The doctors and nurses must have figured out the language code being used. I sure couldn’t.

Mim was sitting on a couch in the lobby. I just handed her the coffee and sat beside her, our thighs touching. She was in a dark pantsuit and a white blouse with a skinny piece of ribbon tied droopily at her throat. Her eyes looked dark and she’d only run a brush a couple of times through her cap of black hair. I noticed a couple of gray hairs at her temples. It jolted me. I always considered her to be ‘the kid’. Sammy was the youngest but Mim was my kid sister and had always acted like one. I knew she was in her forties, but Mim with gray hair? Wow! She had been a high school teacher and had just the one kid, Joanie, now away at Berkeley. She and her abusive husband, French, had divorced a few years ago and, last I heard, French was doing hard time for screwing a bunch of retirees out of their life savings in some kind of Ponzi scheme. I wondered if Ponzi knew how famous he would become?

She nodded, tears running down her cheeks. “I couldn’t go in to look at him alone, Al.” She pulled out a crumpled tissue and wiped ineffectually at her eyes. “I’m glad you’re here.”

I sipped my coffee, “C’mon. Let’s get it over with.” I helped her to her feet and we took the elevator to the third floor. A nurse was just coming out of his room and held the door for us. I’d met her on several of my trips here and said, “Thanks, Doris.”

“I’m so sorry, Al, Miriam. I wasn’t on duty but Sheila said she was with him and he died quietly and didn’t suffer.”

We thanked her and went inside. The curtain was pulled around his bed. The other bed, the one closest to the door, was empty and had been for a few days. Nobody dying to get it, I thought. I went through the curtain, holding it aside for Mim. She went over to the opposite side of the bed and took a deep breath, steeling herself. After her husband left, she and Pop had gotten close. Little Joanie had spent a lot of time with the old man, telling each other lots of stories, some of them even true, no doubt.

She nodded and I pulled the sheet back. Pop’s face was pale; his hair sparse and neatly combed. I expect Doris or Sheila had fixed him up. He had a faint smile on his clean-shaven face. It was a strong face, square chin and a large hooked nose with close-set eyes. He looked like a cross between a human and an eagle. His lipless mouth just turned up at the corners. I always kidded him that he had Meg Ryan’s mouth. He still did. Mim was crying again, her shoulders shaking, her arms crossed in front of her chest.

I went around and held her tight, and she soaked my shirt. At last she stopped. I was about to pull the sheet back up when she stopped me. “Goodbye, Poppa. I love you.” She stooped and kissed him on the forehead, then turned and walked out.

I looked at the tranquil face. “Hell of a life, Pop. I loved you, too.” And I kissed him on the forehead beside Mim’s kiss.

After that, things became quite a blur of death certificates, funeral arrangements, canceling his credit cards, phone service, email accounts, and paying all the final bills. I took care of all this and the next day, picked Sammy up from the airport. Mim wasn’t much help, although she made the arrangements for the caterer after the memorial service to be held two days later.