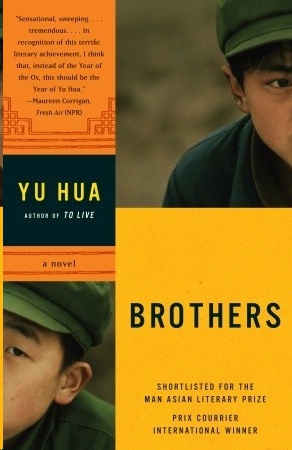 Cries in the Drizzle

Chronicle of a Blood Merchant

The Past and the Punishments 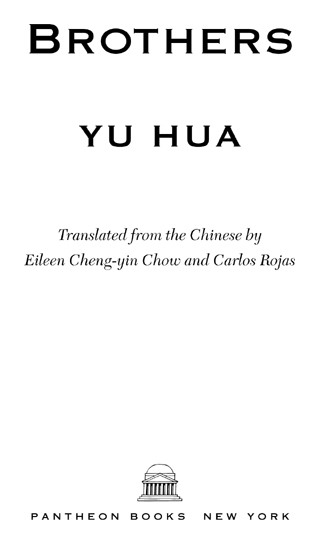 T
HE YEAR 2008 has been a watershed for modern China, for reasons both anticipated and unanticipated. From the agonizing spectacle of digging children's corpses out of the rubble of collapsed school buildings following the Sichuan earthquake, to the spontaneous outpouring of communal support and goodwill that ensued; from the international controversies that have surrounded the preparations leading up to the Beijing Olympics, to the nationalistic pageantry that was the Olympics itself, the Chinese people have experienced a year of remarkable highs and lows. As such, this past year has appeared to contain in concentrated form many of the contradictions that have characterized Chinas multidecade transition from high Maoism to hypercapitalism.

Published in 2005 and 2006, Yu Hua s
Brothers
spans many of these same emotional extremes. Though he originally conceived of the idea for the novel as early as 1995, Yu Hua was inspired to revisit the project during a seven-month sojourn in the United States and France that he began in late 2003. The China he left behind, meanwhile, was in the grip of a pre-Olympics beauty-pageant fever. In September of that year, for instance, a national beauty pageant was held on Hainan Island as a prelude to Chinas first time hosting the Miss World competition two months later. Having banned beauty pageants for the entire latter half of the twentieth century, China dove back into the pageant habit with a vengeance, and over the next few years proceeded to host a wide variety of regional, national, and international pageants—including a Tourism Queen International pageant, a Top Model of the World competition, a National Contest of the Beauty of the Gray-headed for contestants over fifty-five, a Miss Artificial Beauty pageant for plastic surgery recipients, as well as three out of the next four Miss World competitions. Inspired quite possibly by the perspective he gained from his trip abroad, together with the melding of sexual display and regional pride found in the pageant fever that was simultaneously sweeping China, Yu Hua returned to China in March 2004 and immediately began writing
Brothers,
his first novel in a decade.

Completed over a two-year period,
Brothers
is a two-volume, half-million Chinese-character behemoth that traces modern Chinas past four decades of social and cultural transformations through the lives of the stepbrothers Baldy Li and Song Gang. The first volume, which covered the brothers’ childhood during the tumultuous years of the Cultural Revolution, was an immediate national sensation when it appeared in 2005. Published the following year, the highly anticipated second and final volume brought the narrative of
Brothers
through the post-Mao period and the first giddy years of a new capitalist China.

Brothers
presents a unique perspective on contemporary Chinese history, viewing it through a gaze that is precariously balanced between beauty and perversity. The object of this narrative gaze is often the female body (together with its various substitutes), but just as often it is the Chinese body politic—the deeply schizophrenic national history that Yu Hua has lived through, and to which he attempts to give life in the pages of the novel.

Like a beauty pageant,
Brothers
is flashy, blunt, and often deliberately repetitive, yet has moments of sublime beauty and gut-wrenching pathos. It uses a combination of subversive humor and haunting sentimentality to chronicle contemporary Chinas transition from socialist austerity to capitalist hyperbole. Featuring frank descriptions of sexual perversity and unthinkable political violence, not to mention detailed accounts of gender-bending cosmetic procedures and harebrained confidence schemes,
Brothers
presents a highly idiosyncratic account of Chinas transition from Maoist state into that curious socialist-capitalist hybrid that Deng Xiaoping euphemistically called "socialism with Chinese characteristics."

The tenor of the work is established unapologetically in the opening pages. First, the protagonist, Baldy Li, sitting on a gold-plated toilet, imagines himself on a Russian Federation space shuttle, peering down at the Earth below. Almost immediately, the narrative jumps back three decades to another toilet scene, in which fourteen-year-old Baldy Li was caught peeking at women's naked posteriors in a public latrine. Although he doesn't realize it at the time, it is revealed that the teenager is actually following in the footsteps of his father, who, on the day of Baldy Li's birth, lost his balance while also sneaking a peek in the public latrine and, as a result, drowned in the cesspool below. At the same time, this scene anticipates Baldy Li's subsequent lifelong obsession with women's nether regions, and specifically their hymens—an obsession that will culminate decades later in his hosting a hilarious national beauty pageant for virgins.

Like conventional beauty pageants, this Inaugural National Virgin Beauty Competition comments on issues of sexual purity the lure of celebrity, and national pride, as well as processes of self-commoditization. The twist is that it is quickly revealed that none of the contestants is actually a real virgin; instead, they all rely on a combination of artificial hymens and hymenorraphy or hymen-reconstruction surgeries, to create an illusion of virginity (an echo of the Miss Artificial Beauty competition that was held in December 2004, while Yu Hua was writing his novel). The pageants motifs of personal self-reinvention and the creation of a veneer of sexual purity also suggest the ways in which Beijing attempted to refashion itself in the eyes of the world in preparation for hosting its first Olympics, in summer 2008. China, Yu Hua seems to imply, is presenting the international community with an illusion of refurbished purity, while
Brothers,
by contrast, attempts to plumb the depths of the nations soul.

We saw Yu Hua and his family when they visited Cambridge, Massachusetts, in November 2003. We were, of course, already very familiar with his works, but what struck us most during the few days spent together was not Yu Hua the literary bête noire, but Yu Hua the doting, proud father to his ten-year-old son, Yu Haiguo. Yu Hua marveled at how quickly Haiguo, after only a few short months in the United States, was adapting to his new environment, and he took obvious delight in Haiguo s many quirky observations of their shared adventure. In addition to everything else,
Brothers
is about parents and children, and the lengths to which parents will go to protect their children from a world gone mad. We ourselves have come to appreciate that aspect of the novel more as we have, in the interim, found ourselves proud parents to a little Baldy Li of our own.

B
ALDY LI
, our Liu Towns premier tycoon, had a fantastic plan of spending twenty million U.S. dollars to purchase a ride on a Russian Federation space shuttle for a tour of outer space. Perched atop his famously gold-plated toilet seat, he would close his eyes and imagine himself already floating in orbit, surrounded by the unfathomably frigid depths of space. He would look down at the glorious planet stretched out beneath him, only to choke up on realizing that he had no family left down on Earth.

Baldy Li used to have a brother named Song Gang, who was a year older and a whole head taller and with whom he shared everything. Loyal, stubborn Song Gang had died three years earlier, reduced to a pile of ashes. When Baldy Li remembered the small wooden urn containing his brothers remains, he had a million mixed emotions. The ashes from even a sapling, he thought, would outweigh those from Song Gangs bones.

Back when Baldy Li's mother was still alive, she always liked to speak to him about Song Gang as being a chip off the old block. She would emphasize how honest and kind he was, just like his father, and remark that father and son were like two melons from the same vine. When she talked about Baldy Li, she didn't say this sort of thing but would emphatically shake her head. She said that Baldy Li and his father were completely different sorts of people, on completely different paths. It was not until Baldy Li's fourteenth year, when he was nabbed for peeping at five women's bottoms in a public pit toilet, that his mother drastically reversed her earlier opinion of her son. Only then did she finally understand that Baldy Li and his father were in fact two melons from the same vine after all. Baldy Li remembered clearly how his mother had averted her eyes and turned away from him, muttering bitterly as she wiped away her tears, "A chip off the old block."

Baldy Li had never met his birth father, since on the day he was born his father left this earth in a fit of stink. His mother told him that his father had drowned, but Baldy Li asked, "How? Did he drown in the stream, in the pond, or in a well?" His mother didn't respond. It was
only later, after Baldy Li had been caught peeping and had become stinkingly notorious throughout Liu Town—only then did he learn that he really was another rotten melon off the same damn vine as his father. And it was only then that he learned that his father had also been peeping at women's butts in a latrine when he accidentally fell into the cesspool and drowned.

Everyone in Liu Town—men and women, young and old—laughed when they heard about Baldy Li and couldn't stop repeating, "A chip off the old block." As sure as a tree grows leaves, if you were from Liu Town, you would have the phrase on your lips; even toddlers who had just learned to speak were gurgling it. People pointed at Baldy Li, whispering to each other and covering their mouths and snickering, but Baldy Li would maintain an innocent expression as he continued on his way. Inside, however, he would be chuckling because now—at that time he was almost fifteen—he finally knew what it was to be aman.

Nowadays the world is filled with women's bare butts shaking hither and thither, on television and in the movies, on VCRs and DVDs, in advertisements and magazines, on the sides of ballpoint pens and cigarette lighters. These include all sorts of butts: imported butts, domestic butts; white, yellow, black, and brown; big, small, fat, and thin; smooth and coarse, young and old, fake and real—every shape and size in a bedazzling variety. Nowadays women's bare butts aren't worth much, since they can be found virtually everywhere. But back then things were different. It used to be that women's bottoms were considered a rare and precious commodity that you couldn't trade for gold or silver or pearls. To see one, you had to go peeping in the public toilet—which is why you had a little hoodlum like Baldy Li being caught in the act, and a big hoodlum like his father losing his life for the sake of a glimpse.

Public toilets back then were different from today. Nowadays you wouldn't be able to spy on a woman's butt in a toilet even if you had a periscope, but back then there was only a flimsy partition between the men's and women's sections, below which there was a shared cesspool. On the other side of the partition the sounds of women peeing and shitting seemed disconcertingly close. So instead of squatting down where you should, you could poke your head under the partition, suspending yourself above the muck below by tightly gripping the boards with your hands and your legs. With the nauseating stench bringing
tears to your eyes and maggots crawling all around, you could bend over like a competitive swimmer at the starting block about to dive into the pool, and the deeper you bent over, the more butt you would be able to see.