Read Bug Out! Part 11: Motorhomes on the Dark Road Online

Bug Out! Part 11: Motorhomes on the Dark Road 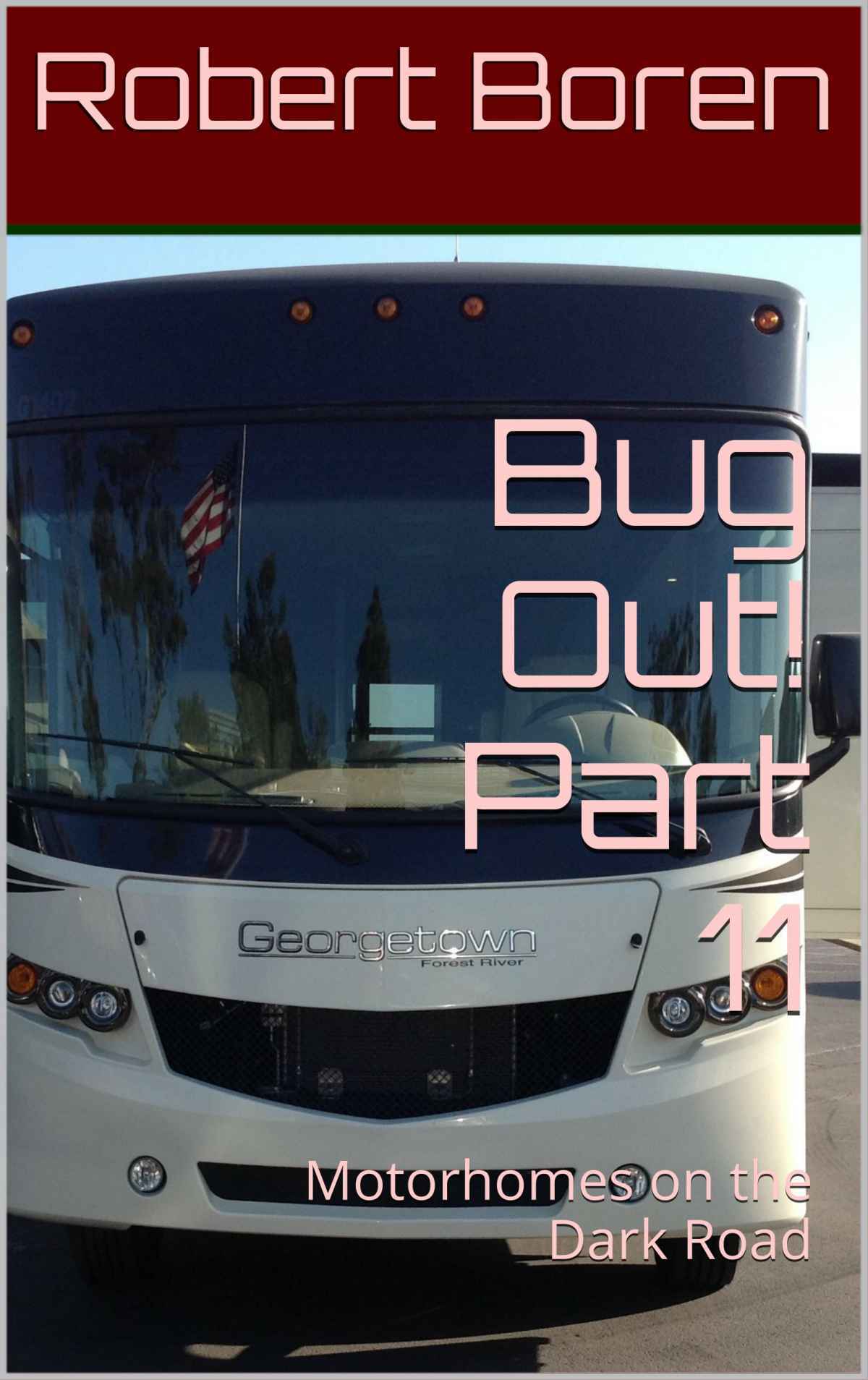 Motorhomes on the Dark Road

Chapter 5 – Over the Cliff

Copyright - About the Author

The war came to a head. Our group destroyed the enemy base at Capitol Reef and captured Saladin. He revealed his plan to infect the country with small pox before dying of his burns. Frank published his apps far and wide. Militia traitors faded into the woodwork, removing their chips. Citizens and the armed forces defeated the Islamist fighters in Colorado and Utah. Islamists in lead-shielded vehicles attacked the Kansas RV Park. Howard and Scott staged a massacre at a family farm house, taking out a biker gang. They hid out in Scott’s mysterious house in Columbus, Ohio. Special Agent Keith investigated the massacre, using it to lure Malcolm and George into another confrontation. Jeb’s condition slowly improved after surgery. Gabe, Earl, and Hilda started the long trip home from the hospital, followed by the enemy, playing cat and mouse on the treacherous road.

Rosie jerked awake, the sound of gunfire
jarring her. Multiple shots coming from the parking lot. She pulled her cellphone out of her purse and turned on the short range app. Nothing. Jeb was stirring. She buzzed the nurse.

The nurse rushed in as Jeb woke up. “What happened?” she asked, terror on her face.

“Jeb waking. That gunshot I hear?”

“Yes, in the parking lot. The army is there, and they have more help coming from town. Stay away from the windows.”

“Doctor said want to talk to Jeb when he wake.”

“I’ll tell him, Rosie. Thanks.” the nurse said, rushing out.

There were several more shots sounding closer, and then yelling in Arabic.

“Nothing. Maybe they remove chips,” she said.

“Maybe they changed the code again,” Jeb said. “Wish we had an indicator.”

The gunfire noise increased outside, along with the sounds of army men yelling instructions.

The doctor walked in, looking at his phone. “Jeb still awake?”

“The army is out there taking care of it,” the doctor said. “Don’t worry. The apps weren’t working, but now they seem to be back.”

“The enemy changed the codes again,” Jeb said. “The app learns. How many around us?”

“Good,” Jeb said. “The army guys will handle that. Zoom out a little. Any larger groups on the way?”

“They thought they could come get me,” Jeb said. “Which means they know where I am. We need to watch. Wonder how long the apps were down.”

“We can’t tell,” the doctor said. “Could have started when they got here. If that’s the case, about five minutes.”

“Each time they do that, it’ll get shorter,” Jeb said. “Should have already been less than five minutes.”

“Maybe it was,” the doctor said. “If they coordinated well, it could have been two or three minutes.”

“We need Frank to put the indicator on these,” Jeb said. “He said he’d work on it.”

“Yeah,” he said. “Jeb, we plan to operate tomorrow, but I need to discuss it with you.”

“We could go in two different directions. We could leave you the way you are, and you’d have a 99% chance of survival, but you’d be in a wheelchair for the rest of your life.”

“We operate. Your survival rate on that is 70%. The chances you’ll be able to walk again after that are 60%.”

“Oh,” Jeb said, staring up at the ceiling. “What do you think, Rosie?”

“I can’t imagine living the rest of my life in a chair, doc. Let’s go for the surgery.”

“Okay, Jeb. That would be my choice as well, but I can’t go forward without telling you both options.”

“When is it going to happen?” Jeb asked.

“First thing tomorrow morning, so get plenty of sleep tonight.”

He left the room.

“You okay, sweetie?” he asked.

“I worried but okay,” she said. “I call Jasmine about attack and app.”

Frank was in the clubhouse, on the PC. “Hey, guys, we just had an app outage. Better let people know!”

“Just over three minutes,” Frank said. “I thought it would be less. It’ll be less next time.”

“Oh, no. I see icons at the hospital,” Jasmine cried.

“How many?” Jerry asked.

“Eight. They’re in the parking lot, and they’re not moving.”

Just then her cellphone rang. She put it to her ear.

“Jeb go under knife tomorrow. He have 70% chance of survival, 60% chance he can walk after.”

“I know. Keep us in thoughts. You see any other bad guys?”

“No, just those eight. This means they know where you are.”

“Yes. When we come back, need escort.”

“Well, I go now. We try to sleep before tomorrow. Take care.”

Jasmine put her phone down. “That was a coordinated attack. They changed the codes right before they hit the place.”

“Nobody was keeping an eye out, or they’d have seen them coming before the apps went down,” Jerry said.

“That’s what I was thinking,” Jane said. “Something is a little strange here.”

“Hey, Frank, you don’t think they might be shielding themselves somehow, do you?” asked Jerry.

“Good question,” Frank said. “Eight guys? Could be feasible. We need to see their vehicle.”

There was commotion coming from the kitchen, and Charlie ran in, with Jackson, Dobie, and General Hogan following.

“Hey, guys, the hospital is under attack!” Charlie said.

“Just talked to Rosie,” Jerry said. “It’s over. The army took care of it.”

“Why didn’t we see them on the apps?” the general asked.

“Yep, the apps were down for about three minutes,” Frank said. “They coordinated that with the attack on the hospital.”

“Well, the short range app is back up,” Jerry said. “There might not be cell coverage where they are. I’m sure they’re trying to avoid the northern part of Colorado.”

Charlie was calming down. “Yeah, Hilda said they were taking the southern route through Utah, then route 50 into Pueblo.”

Jackson smiled. “Hell, we won’t be able to raise them on and off for a good part of the way,” he said. “It’s really sparse along there. They’re probably fine, Charlie.”

“I hope so, but I’m gonna worry until we can reach them.”

“You and me both,” General Hogan said. “Something isn’t adding up here. If the apps were only down for three minutes, why didn’t our guys see them driving up before that? They would have been close enough to set off the app alarms before that three minutes started.”

“That’s what we were talking about when you guys came in,” Jerry said. “They might have shielded themselves.”

“General, I’d call your men and make sure they find the vehicle those cretins came in,” Frank said. “They might have used lead or something else to hide themselves.”

“Meanwhile, take a look along route 50,” Charlie said. “With the detail app.”

“I’m doing that now,” Jane said. “Nothing, but remember we need cell coverage for this app. If there’s anybody close to them, the short range app should buzz.”

“How long will the next outage be if they change the codes again?” Charlie asked.

“I can only guestimate,” Frank said. “Probably a minute or less.”

“Wonder if they know their window is depleting each time they do this?” Jerry asked.

“That’s the 64,000 dollar question,” General Hogan said as he walked back over. “Major Harrison has the men looking for their vehicle now. He’ll get back to us.”

Howard followed Bailey through the back door of the old Columbus, Ohio house.

“Where’s the kitchen, Scotty?” she cried out.

“Go down the hallway, past the living room. It’s in the front left corner of the house. Fridge should be on.”

“Wow, look at that old fridge,” Howard said, laughing, as he opened the door. It was cold inside. Bailey set the bin on the floor in front of it, and they loaded the food.

“This is a great kitchen,” Bailey said, looking around. Everything was old fashioned, from the old tile counters to the painted wood cabinets with glass doors, and the large farmhouse kitchen table in the middle of the room.

Scott walked in. “Well, what do you think?”

“Where’d you get the old furniture?” Howard asked.

“Oh, I bought this house furnished,” he said, grinning. “From an estate. There was an old lady living here. She inherited the place from her parents. Same family owned this house since 1910.”

“The lady was a total hoarder,” Scott said. “Took me several weeks to clean the place out. I was surprised at how nice it was once I got all the crap out. There were only two relatives left, and neither of them had the time or the inclination to get involved with the mess. Worked out perfect for me.”

“I’m surprised this isn’t on the historic registry,” Howard said. “Or maybe it is. Can you remodel if you want to?”

“I tucked him in. He’s thrilled with his room.”

“Sure,” Scott said. Howard took three out of the fridge.

“You want one, Bailey?” Howard asked.

“Sure,” she said, still looking around. “I’d love to live in a place like this.”

“And so you shall,” Scott said as he opened his beer.

“Oh, this will continue to be my home base,” Scott said. “There’s much better access to playmates around here. We’re only a couple blocks from the University.”

“So why go back to the RV Park?” Howard asked.

“My stuff is there. Important stuff. Clan history.”

“They’ve probably already found that,” Howard said. “The authorities may have it now.”

“Nah, we would’ve heard about it by now.”

“I can’t believe the family would just walk away from this place,” Bailey said. “It’s a jewel, really. It’s like a time capsule.”

“They had their reasons,” Scotty said, with a sly grin on his face.

Bailey looked at both of them, eyes intense. “This is an evil place, isn’t it, Scotty?”

“You ever heard of the Torso Murderer?” he asked.

“The subject never came up, but neither of the surviving relatives would come into the house, and neither of them had talked to the old bird who lived here for years and years. They sounded scared to me.”

“Why didn’t you just tell us that in the first place, Scotty?” Howard asked. “You’re always messing with us. Always theatrics.”

The Pattern Ship (The Pattern Universe) by Roote, Tobias
I Was Jane Austen's Best Friend by Cora Harrison
Maxwell's Chain by M.J. Trow
No Longer a Gentleman by Mary Jo Putney
Dark Powers by Rebecca York
Frost Like Night by Sara Raasch
Crunch by Rick Bundschuh
Locked with Him by Ellen Dominick
The Last Princess by Cynthia Freeman
Death Sentence by Sheryl Browne
Our partner