Read Bullet to the Heart Online 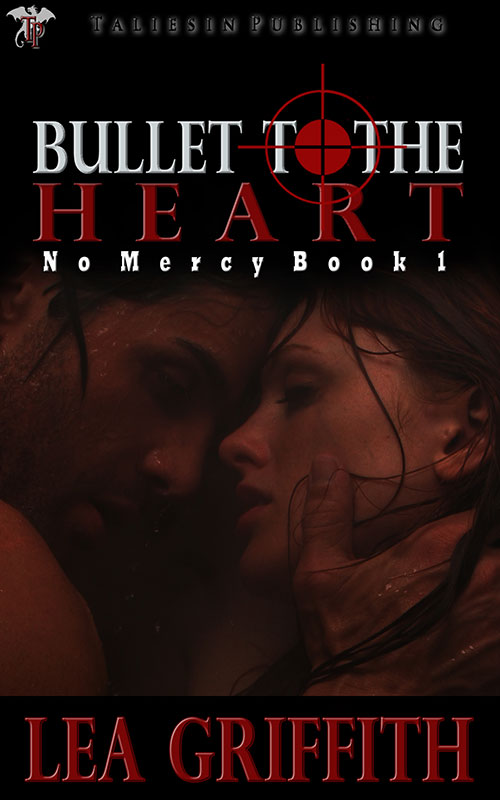 eBooks are not transferable. They cannot be sold, shared, or given away as it is an infringement on the copyright of this work. Please purchase only authorized electronic or print editions and do not participate in or encourage the electronic piracy of copyrighted material. Your support of the author’s rights is appreciated.

Warning: The unauthorized reproduction or distribution of this copyrighted work is illegal. No part of this book may be scanned, uploaded or distributed via the Internet or any other means, electronic or print, without the publisher’s permission. Criminal copyright infringement, including infringement without monetary gain, is investigated by the FBI and is punishable by up to 5 years in federal prison and a fine of $250,000 (http://www.fbi.gov/ipr/).

This book is a work of fiction. The names, characters, places, and incidents are products of the writer’s imagination, or have been used fictitiously and are not to be construed as real. Any resemblance to persons, living or dead, actual events, locales, or organizations is entirely coincidental.

She was born to love then taught to kill. She has become everything but is no one.

Known only as Bullet, she was long ago forced to shed the name her parents gave her. Changed, molded, and trained to kill with sharp-shooting efficiency, she is one of The Collective’s most valuable assets. In a cadre of killers, Bullet is death waiting, but her time for vengeance has come.

He was loved, and then he lost. He has become a hunter in search of revenge.

Everything was taken from Rand the day a bullet ended the lives of his beloved wife and daughter. He has searched for their killer seven long years and may have her in his hands. Rand has suffered, but now the time has come to make The Collective pay or die trying.

They’d been tasked with quiet, told not to allow even their breathing to be heard. Bullet had tried so hard. Then night had come, and as her teeth chattered, she’d worried they’d return for her, put her back in the water pit. After a while numbness had crept in, and the tic-tic-tic-tic of her teeth knocking together ceased.

Wind whistled, and sometimes the snap and pop of a twig breaking underneath a scurrying animal damaged the silence. Her ears strained to hear the sounds of the other girls, but through the darkest part of the day, as her Mama called nighttime, she’d mostly heard nothing but her own heartbeat. Now there was only the boom of the stillness, loud and deafening.

She opened her eyes and they burned. She tried to swallow, but her tongue, thick and dry, stuck to the roof of her mouth. Pale pink and orange light streaked the sky to her right, but the promised warmth of the breaking dawn was nowhere to be found. She’d once gathered sand dollars on the beach with her parents, and they’d watched the sun rise over the ocean. It had been warm there, beside the waves—so, so warm. She didn’t remember how long ago that had been. It seemed forever.

Fear pinched and pulled her stomach into a tight knot. Bullet stretched but could get no more than a fingertip on the girl’s leg. The contact wasn’t enough. The girl was so cold. “I’m Bullet now. Remember?”

“You’re not supposed to use names, Ninka,” another girl scolded, her whisper sibilant in the endless, unbroken quiet.

“She wasn’t talking to you, Blade,” Bullet chastised in a low voice, alarm pulling at her heart, making her breaths come faster in the cold air.

She was making noise. She’d be punished.

“That’s why we’re out here, though, Bullet. She used our names and we all got tasked,” Blade said.

Silence reigned another few minutes; how many, Bullet didn’t know. The minutes, hours, and days had ceased to be different. They all ran together now.

“
Bayu-bay
, all people should sleep at night,

“Bayu-bay
, tomorrow is a new day

“We got very tired today,

“Let’s say to everyone ‘Good night’,

Bullet’s body trembled with more than the cold that had ushered them through the night. Ninka’s voice was soft as she sang the Russian lullaby. Bullet struggled to hear it. It whispered across her ears, much like the fog that crept in with the dark, and slipped back to the ocean beyond these mountains when the sun rose.

Bullet strained to see the blue Ninka spoke of, but it was hidden by the colors of the dawn. “Hold on, Ninka. This task is almost over,” Bullet croaked out from her dry, sore throat.

“She’ll get herself killed and the rest of us punished. Shut up, Ninka,
please
,” Blade whined.

Bullet’s sister had sounded like that a lot when she didn’t get what she wanted. She’d been a year younger than Bullet, and a big crybaby, but Bullet had loved her so much. She was dead now. Just like Mama and Daddy.

Her breath snagged, and her tears were cold as they fell down her temple and into her hair. She missed her sister.

Bullet tried to block out the others and focus on Ninka. This task had some meaning, but it was beyond her. Staked to the ground, naked, through the night, and forced to maintain silence for fear of punishment? Her mind struggled to process what the lesson was, but it eluded her, like the butterflies did when she and Mama went to catch them.

“Shut her up, Bullet. She’ll get us all back in the water pit,” Bone whispered furiously. All of them had been staked out except for Bone. They’d tied her to a tree and gone so far as to wrap her long, curly brown hair around the trunk of it. She couldn’t move her head and she’d had to stand all night long.

“The sky is blue, blue, blue,” Ninka sing-songed, the beautiful purity of her little girl’s voice like nails on a chalkboard to Bullet. Her heart wrenched in her chest, and chilly bumps popped out on her body.

“They come,” Arrow’s voice was like the wind, biting and cold. She was the same size as them, but she always seemed so
old
.

“Ninka, hush
poupon
, don’t say a word,” Bullet pleaded. She even used the name her mother and father had called her, little baby. Bullet had been their beautiful little baby.

“
Bayu-bay
,
Bayu-bay
, tomorrow is a new day,” Ninka trilled out, making no effort to be quiet. “Gretchen, my mama is calling me. Do you hear her?”

Bullet was five years old, but she wasn’t stupid. Ninka’s mama wasn’t calling anybody. She stayed silent and prayed like her mama had taught her to the person named God. She prayed Ninka would shut her mouth and be quiet.

Bullet closed her eyes and slowed her breathing. The sound of earth crunching beneath solid boots rebounded in the clearing where they’d been staked. She turned her head. The sun’s rays climbed over the mountain ridge they were on, silhouetting the big tall men who were coming to make sure they’d stayed silent.

The really big one with black eyes made Bullet sweat in the chill of the morning. Her muscles cramped as her blood rushed. She was scared. Her backside was numb, but pinpricks of pain made her gasp. She swallowed the sound before it could escape her.

“Come to me, Mama, from the very blue sky,” Ninka said in a fading, hoarse whisper.

The others were quiet. They’d each defied the task, but the men need not know that.

The black-eyed man walked to stand over Bullet, his gaze moving over her naked frame, appraising. He looked at her like her doctor used to, like he was looking for sickness or boo-boos.

“She’s tiny, Minton, but she’s survived.” His gaze had moved over his shoulder, but it returned and he asked her, “Tell me, dove, did you stay silent?”

She almost spoke aloud but remembered the task and cut it off. She nodded her head. This seemed to please him as he smiled slightly and nodded in return.

The other man, the one called Minton, walked over and gave her but a passing, dismissive glance before he jerked his head toward Ninka. The poor girl continued to sing her mother’s lullaby, lost to the danger that had come into the clearing.

The black-eyed man stared at Bullet, watching her, gauging her reaction to Ninka’s singing. Every movement she or the others made was watched and recorded. Any reactions to their own or other’s pain and suffering was written down in the man’s little red book. He never stopped watching them.

He bent down, and she couldn’t control her fear for a moment. Wetness leaked from her bladder and ran down her bottom into the ground beneath her. His eyes flickered away for a second, features tightening in disgust, but then he smiled and looked back. “Sometimes fear is good,” he said in a whisper before he began to release the ropes that tied her to the stakes in the ground.

He released the last one; still she didn’t move. She’d learned not to do so until he spoke and allowed it. She continued to stare up at him, the backdrop of Ninka’s blue sky startling to her.

For a few moments, nothing moved. Her eardrums quivered in the complete absence of sound. Even Ninka had quieted. His gaze cut into her, drilled into her head, and she tried so hard to push the panic down deep inside her like Arrow had been teaching her. He didn’t take his eyes from hers as he said, “Minton, have Julio take care of little Ninka, would you?”

“She’s such a waste,” the other man spat toward Ninka. “Julio, you heard him.”

The black-eyed man stood back and murmured, “Get up, Bullet. There’s work to be done.”

She lowered her eyes from his and kept her gaze trained on his legs. He was wearing a long brown leather coat, and his breath made smoke in the air. Hands at his side, he shifted, and she saw the gun holstered on his hip. In her periphery she saw Julio untying Ninka from her stakes. The girl didn’t move and her eyes were closed. Bullet moved to her knees and almost fell as the blood rushed to her legs. On all fours now, she peered through long pieces of her red hair, trying to stay aware of her surroundings.

“Stand up, child. You’ll be needed soon,” the black-eyed man said and finally took the weight of his gaze from her, passing it to Julio and Ninka.

Bullet wondered who needed her, but the thought flitted away as the gun caught her attention. Her palms itched. These weapons, more than any other, fascinated her. When the black-eyed man had first put one in her hand, she’d grasped the handle and felt the rightness of the connection between her and weapon radiate up her arm.

Close to Home by Lisa Jackson
The Awakening, Zuleika and the Barbarian by Bertrice Small
DEAD GONE by Luca Veste
Departure by A. G. Riddle
No Strings Attached (The Pink Bean Series Book 1) by Harper Bliss
Prayers and Lies by Sherri Wood Emmons
Blitzed (The Alpha Ballers #3) by Lucy Snow
Homecoming Queen by Melody Carlson
Eolyn by Karin Rita Gastreich
No One's Watching by Sandy Green
Our partner