Read What We Knew Online 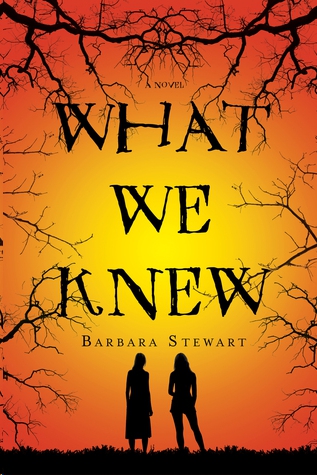 This is a work of fiction. All of the characters, organizations, and events portrayed in this novel or either products of the author’s imagination or are used fictitiously.

The Library of Congress Cataloging-in-Publication Data is available upon request.

St. Martin’s Griffin books may be purchased for educational, business, or promotional use. For information on bulk purchases, please contact the Macmillan Corporate and Premium Sales Department at 1-800-221-7945, extension 5442, or write to [email protected]

Special thanks to my agent, Amy Tipton, and my editor, Vicki Lame. I’m honored to work with you both.

Thanks to my family: Mom and Dad, Kelly, Fred, Mary, Sarah, Fred, and Sue. You guys are the best!

And finally, a big thank-you to Dave—for everything.

You remember Banana Man, right? That urban legend when we were kids? The reason we always took the long way home? All through middle school, it was either down Bradley, past the hospital and up McClellan, or it was over the hill and through the park. Not you. Lisa and me. I don’t know if you ever cut through the woods. Maybe you weren’t afraid. Maybe you didn’t have anything to fear. After all, it was the girls he wanted. Banana Man. What a stupid name. When I was little, I imagined a monster: stilt legs and long teeth, oily black eyes. God, I had so many nightmares about those woods. Did you know that? How I used to dream of running and running until I found a shack and thought I was safe? But in the end, the shack was always his home, and he was waiting inside, waiting to shred me with his jagged fingernails. It all changed when Lisa told me about flashers:
No, silly. You know, he shows girls his
banana
.
Then I pictured some drooling perv in a belted raincoat, with a comb-over and thick, thick glasses. But that’s not how he looks. Looked. No. He looked like somebody’s dad. I thought he was just something somebody’s parents made up to keep us out of the woods. Mom says the story’s been around forever. But he’s real. And now he’s dead. He’s dead, Scott. And I killed him.

I felt it in the air, a dangerous energy pulsing. I’ve always been sensitive to other people’s moods—Lisa’s, especially—and this was going to be monumental, explosive. It was in my bones, my gut, this tingling nervousness that made me wish I’d stayed home or gone somewhere alone with Adam. We were in Trent’s bedroom on the third floor, drinking achingly sweet wine coolers, smoking, blasting Trent’s expensive speakers. Exactly what we’d done four nights in a row since summer started.

But tonight was different.

There was the kind of stifling attic heat that bakes your brain. Everything reeked of boy: socks and dirty sheets and god-knows-what. The window was open, but there was no breeze to take the edge off. The balance had shifted. It was supposed to be me and Adam, and Lisa and Gabe, and Trent and Rachel. But Gabe had to work. And then Rachel got pissed at Trent—something stupid—and stormed out. Her squealing tires made us laugh.

Was their fight the match that lit the fuse? Or maybe it started long before that night, building and building, gathering strength like a storm. An act of nature. Something none of us had the power to control.

“Where are my keys?” Trent asked, looking at his desk. “Who moved my keys?”

I finished my wine cooler—warm and syrupy—and held it in my mouth. I swear I could feel my teeth corroding. Adam picked at the rubber on his sneaker. Behind the drum set, Lisa spun around and crashed a cymbal.

“If one of you guys is screwing with me—” Trent said, overturning a laundry basket on the bed and digging through his clothes.

Adam fell back on his elbow and reached for the bottle on the windowsill. “Maybe Rachel took them,” he said. Trent’s jaw tightened and Adam backpedaled. “Not on purpose.”

“Yes, on purpose,” I said, coaxing the bottle from Adam’s grip.

Lisa nodded. “Tracy’s right. She wants you to chase after her,” she said, twirling a drumstick. “Don’t do it. Get ’em tomorrow.”

“I have to work in the morning.” Trent groaned, raking his wild hair. A bead of sweat traveled down his neck. His T-shirt was wet and limp, like he’d pulled it straight from the washer. He snatched up his phone and tapped the screen. We were all silent, waiting to see if Rachel would answer.

Stupid and wasted, the four of us stumbled through the darkened streets, Trent and Lisa in the lead. It was easily still eighty, but after Trent’s bedroom it felt cool. I rubbed my arms, and Adam offered me his white oxford. He had dozens of them, all identical. White oxford, T-shirt, jeans, black Cons. That’s what he wore year-round, except for winter when he layered a big black sweater on top.

“Can I keep it?” I asked, lifting the collar to my nose. “It smells like you.”

Adam hugged me to his side and slowed his pace, dragging me with him onto someone’s front lawn. I hesitated, then sunk into him. His kisses were soft, not rough and hurried like that jerk from Troy High that time that had …

“Get a room!” Trent shouted, pulling me out of my thoughts. Lisa waved for us to keep up. Walking and kissing was complicated, so finally we just walked, arms around one another. Under the streetlights, we all looked sinisterly beautiful: Lisa’s red lips purpled, her tiny pigtails bronzed. Trent’s glasses reflecting the lights, making his eyes seem to disappear. And Adam’s hair, black as wet asphalt, shadowed his face. A cell phone chimed. Trent’s. Rachel apologizing.

“Yes, I want my keys. No, I’m on my way to you. Fine. See ya.” Trent kicked a paper cup into the street. A car raced by, horn honking. “She’ll meet us at the middle school.”

Hillhurst Middle. Our old school—Lisa’s and mine. Trent and Adam had gone to Oneida. We were almost there, but Lisa was hungry so we stopped at a gas station. I didn’t have any money, so Adam bought me a box of sour balls. Lisa got some cigar-shaped Mexican thing from the heat-lamp island. Marching up Bradley, she waved it like a conductor’s baton, waiting for it to cool. At the top of the hill, she took a bite and made a yuck face. “You want it?”

I squinted. “What is it?” It looked like a petrified finger.

“Beef or chicken?” I asked, poking it.

The taquito landed in the street. A siren whooped. Blue lights flashed. A cop car pulled to the curb with its window down. My heart started pounding. I thought of my mom and Scott, and the time she had to bail him out of jail for resisting arrest at a sit-in. I checked my breath and popped another sour ball.

“What did you toss back there?” The cop was obviously talking to Lisa, but she pointed to herself innocently and looked around. “Me? A taquito?”

“Pick it up,” the cop ordered. “Or I’ll write you a ticket for littering.”

Lisa shot him a look and then turned to the cop. “Seriously?”

Lisa, please,
I thought.
Don’t start.
Adam reached for my hand and squeezed. The radio squawked. The cop checked something on his dashboard. “Pick it up,” he said flatly. We all watched as Lisa tromped through the headlights, arms swinging. Huffing, she pinched the taquito between her fingers and held it out in front of her like it was venomous. “Happy?” she said.

The cop smiled and waved. “Have a good night.”

After the cruiser made the turn for the hospital, Trent burst out laughing. “He was screwing with you,” he said.

“Well, screw him,” Lisa shot back, cocking her arm like a pitcher.

“Don’t,” I said, afraid the cop might circle back. “There’s a Dumpster at the school.”

Dodging her reach, I sprinted uphill, but Lisa gave chase brandishing the taquito, waggling it obscenely behind me. Giggling, we collided in the shadow of the school, waiting until the guys caught up. The empty playground was eerie. Deeper than it looked during the day when it was filled with screeching kids. The light over the east entrance reached only so far. Everything beyond the basketball hoop dissolved into darkness. The chain-link fence cast a black net over the four of us as we sat on the curb, checking our phones. Eventually, Rachel’s hatchback sputtered up the hill. I think she was pissed that Trent wasn’t alone, because Lisa waved and Rachel hit the gas, swerving like she meant to hit us. Everyone scrambled back. Trent’s keys flew out the window.

“You suck!” he shouted at the black exhaust.

I tugged Lisa’s pigtail to get her attention. “I’ve got to go,” I said quietly.

Cupping my mouth, I whispered, “To the bathroom.”

“Go behind the school,” she said.

I looked up at the black windows and looked away.

Judging from the smell, I wasn’t the first person to go behind Hillhurst. Probably not even the first person that night. I moved deeper into the shadows and prayed the stupid cop didn’t patrol the alley. Or worse, that some homeless drunk wouldn’t come stumbling around the corner.

“Lisa?” I whisper-shouted. “Watch for weirdoes.”

Her voice echoed off the bricks: “I’m watching! Go!”

Unbuttoning my shorts, I thought,
Watch for Banana Man,
and shivered. I hadn’t thought about that lame legend in forever. I’m too old to be afraid of boogeymen, but I tensed anyway as a long shadow oozed across the asphalt. I froze, until I heard laughing and running. Lisa, Trent, and Adam advancing. “We can hear you peeing!” Lisa sang around the corner.

I hiked my shorts and raced for the cone of light where Trent and Adam were smoking. Adam offered me a drag, but Lisa was waving her hand and fake coughing, so I passed. Trent pushed his glasses up his nose. “You guys want to see something creepy?” he asked. An evil grin split his face.

“You guys ever hear a story about some psycho who lives in the woods?” he asked.

My neck tingled at the weirdness of his timing. “You’re kidding, right?” I said. “I was just thinking about Banana Man.”

“That’s what we called him, too,” Adam said, flicking his cigarette at the SMOKE-FREE ZONE sign.

Trent moved closer to Lisa. “I heard he did way sicker stuff than showing his junk.”

Lisa folded her arms. “He’s not real,” she said.

“Oh, he’s real,” Trent insisted. “I found where he lives. His house or whatever.”

I pictured the shack from my nightmares. My heart beat harder. The buzz from drinking was gone. In its place throbbed childish fear.

But there is no Banana Man …

“C’mon,” he said, leading us around front, past the main entrance. At the corner, with the school at our backs, we stared at the woods hesitantly. A siren wailed in the distance. Adam stilled my shaking hand.

“We don’t have to do this,” Trent said, teetering on the edge of the curb. “I can show you tomorrow when it’s light.”

“No, let’s do it,” I said, more confidently than I felt. “But hurry. It’s ten after. I’ve got to be home soon.” From the other side of the street, I glanced back at the school. This was as far as I’d ever been and only on a dare. Suddenly, I was nine again:
I’m not going! You go! Did you hear something? I think I heard something! Run!