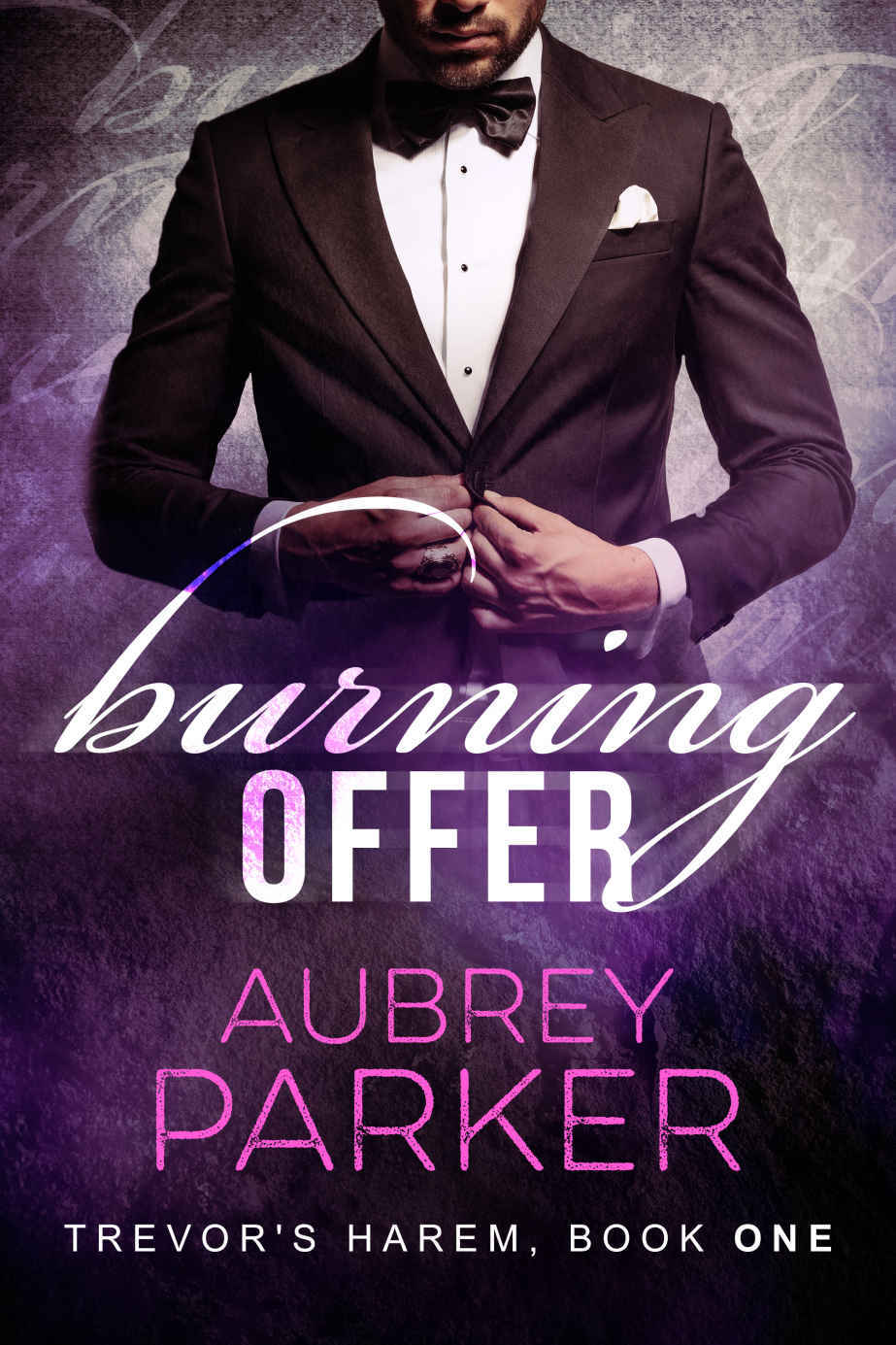 T
HE
B
URNING
O
FFER

My hand goes to my throat, and I think of money.

The club is a riot, and my head is spinning. Fingers stealing to my collarbone could mean several things my conscious mind isn’t aware of. I might perceive a threat, or maybe I’m nervous. It could mean I’m uneasy and need to fidget — subtle shifts of arms, legs, hips, and feet on these too-tall blue heels — my way into a more comfortable position. Or I could be demurring, which I learned today is universal in female flirting. Apparently, if I’m interested in someone, I’ll tilt my chin down, roll my eyes up, and idly brush my hair, face, and neck. I won’t intend to do it; it’s programming. So I can forgive myself for noticing the tall, dark man in the suit despite all that’s on my mind. Flirting is biology, operating without intellect’s consent. Genes striving to be perpetuated down the generations by nudging bodies into motion and lubricating their congress. A reason that all of us, everywhere, can be forgiven for our stupid sexual mistakes. We’re animals, when you get right down to it: fundamentally out of control.

But despite my discomfort at being here, and the admiring stranger’s many glances, I know what my hand is doing, stroking my throat, dragging short nails across my skin.

And again, I think of money.

The hand circling my bare upper arm makes me jump, and sends that guilty hand flitting back to my side like a little bird with a secret.

“Are you having fun, Bridget?”

Abigail. Shout-speaking over the music.

I force a smile. I feel caught but am not entirely sure why. I’m hiding a few things, sure. Everyone does. But before Abigail took my arm, I was just standing here, leaning against a wall like a dude, a man’s drink in my free hand. I’m sure I look uncomfortable and unapproachable. But I’m sure as hell not going to sit at the table like the other girls who’ve been left alone, waiting for a man to save me with a dance.

The thought makes my eyes flit toward the stranger I’ve seen watching me all night. The one with tan, possibly Latino skin, one day’s stubble, a suit that’s either black or very dark blue, sitting on his broad shoulders so well, it must be custom tailored. Starched white dress shirt underneath, no tie with an open throat. A black dagger of what looks like a tribal tattoo poking into the open V like the tip of a secret identity.

But he’s gone. And Abigail is smiling, waiting for a proper answer.

Instead of giving it to her, I nod and touch my throat. Intentionally this time.

“We can talk more quietly outside!”

I hate clubs. I hate crowds. I don’t even like groups larger than a few people. This place is the opposite of my scene, but Abigail’s been on the road with Gavin for weeks now, and this is the closest their little band will be to Inferno Falls for months. Or maybe Abigail has finally made the escape she’s been longing to make since I’ve known her — and won’t be coming back at all. I
had
to come.

I nod and mouth;
I’m enjoying the music.

But I’m not. I came here to see their ensemble, not this shitty opening act. I love Abigail, and feel guilt atop my current shame for not wanting to obey my true desire and head outside where it’s quieter. But my feelings are complex, and right now I can abide sympathetic company even less than this sensory torture. I’ve felt conflicted since this morning when I received the envelope, without a stamp or any return address. Since the investigation it prompted. Since what I discovered — and then remembered.

“Does it still hurt?”
Abigail shout-asks.

My throat. My surgery. Eleven months ago; no, of course it doesn’t still hurt. But Abigail knows what I do for a living — the public half, anyway — so I can be a bit of a diva. You don’t strain your voice in a club when it’s your moneymaker, hurt or no hurt.

I nod, still smiling, still sneaking glances at where my admirer was before he disappeared.

I feel terrible brushing her off, but I know if we go outside Abigail will ask how things are, if I’m any closer to my dream now that she’s wrapped her hands around hers. I can’t take her sympathy right now, or her wanting to help me.

I’m not proud of what I’ve done.

I’m not proud of what I’m still doing.

And I’m uneasy.
Oh, God,
am I uneasy. I wish I knew why, but I don’t; not really. The envelope on my doorstep was a splinter, under my skin and in my mind, but I don’t know where or how to extricate it. I only know that it’s bothering me, and that the more time passes, the deeper its implications burrow. I jumped a foot at Abigail’s touch. Luckily, with the music thrumming, she seems to have taken it for some wall-bound species of dancing.

I’m opening my mouth to say something about getting a very late dinner after they play, when things finally quiet. But before I speak, Freddy is tapping Abigail on the shoulder, motioning her backstage. It’s nearly eleven. They must be getting ready to go on.

And then I’m alone again. With my hand wanting my throat, thinking of money.

What I need, it’ll take tens of thousands of dollars.

Hell, I don’t know how these things work. It could be
millions
.

And yet what was the last thing I spent money on? The last time I borrowed money from my foster brother, Brandon, I got nodules taken off my vocal cords. Something that served me and no one else. Not a ton of money. But money I don’t have today because I spent it on myself. I could have made do. I could have saved that money, and it might have bought us some time.

I feel uneasy, like I’ll never again be able to sit still or sleep.

I feel trapped.
Beyond
trapped.

And then the hairs on the back of my neck prickle. Someone’s behind me. Someone large, whom I can feel towering over me even before I turn. I’m five-eight, and wearing heels. But the presence at my rear is taller, broader.

I turn. And I see the man from earlier. The one I noticed outside as he eyed me, when a bouncer came to usher me into the club before I could drop Abigail’s name. The one who raised his glass from the bar, as if toasting a shared secret. The one who was watching when Abigail walked up — openly, like he owned me.

The stew of emotion in my chest seems to amalgamate into desire.
Displacement
, my mind says, remembering the psychology I found myself reading after the invitation’s arrival.
Escapism
.

My chin tilts down. Without meaning to, I touch my hair, my neck.

And to my horror, I realize that despite all that’s happened, I’m incredibly turned on.

The music belting from the speakers trails off, and he says into the relative quiet, “Elle. It’s you.”

But my name is Bridget.

“It’s me,” he says, and I watch his chest muscles shift as he reaches toward me, the tips of what look like a massive tattoo writhing under his tan skin like a snake. “It’s Alexander.”

But I’m not Elle. I’m Bridget. And this isn’t Alexander. I’d know, considering that I’m Elle and all.

The music hasn’t resumed blaring from the speakers, and things are far too quiet for whatever this is. We’re around the corner in this little club, as far from the stage and relatively civil pit as I could justify being without offending Abigail. When Forbidden Muse starts playing, I’ll need to move much closer. But for now, I’m near the door, and I’ve already had to sneak out for some air a few times already. The way today has been, I keep feeling like I might hyperventilate if I think on the wrong things for too long. The chill night air slaps me across the face enough to allow my return. But here and now, facing this handsome man and feeling something wrong inside me come alight, I seem to need a thousand slaps. The club is too small, and I won’t let myself believe he could possibly be saying what he seems to be saying.

“I think you have me mistaken for someone else.”

I stand straighter. Ice clinks in my glass. I’m drinking scotch. I give the stranger my usual look. The one that Brandon says makes grown men cry, and not in a good way. Like I might kick them in the nuts. Or pull off their pants and laugh at the size of their dicks.

But the man doesn’t flinch.
Alexander
, he claims. He gives me a smile that lifts from only one side of his mouth, like he’s playing with me. A condescending, knowing look — dead sexy in a way I’d rather not admit even to myself.

“Nice to meet you, then,” I say. And I peel myself from the wall to walk away. Toward the front. Toward my friend, who dragged me here to support her, to get me out of the funk she couldn’t possibly know I’ve been in. Unless everyone knows. Unless everyone knows it all, like Alexander here.

He grabs my wrist. Hard. I’m so shocked, I don’t even wrench my arm away. I can only look back at him, aghast. Was I really feeling some strange attraction to this man just minutes earlier? Goes to show how fucked up I am lately. How fucked up I’ve been through my whole vagabond’s life, I suppose.

“It wasn’t easy to find you,” he says, still holding tight.

I yank my hand back, but he’s already let go. He’s leaning back against a rail along the outer wall, one leg propped up like we’re here to shoot the shit. His hand lays down on the knee of a kicked-up leg. He’s wearing cufflinks. Tailored French cuffs, starched stiff as boards. I can’t guess at the thread count in his pants.

“My name is Bridget.”

His smug smile widens. Great. Now I’ve given this creepy asshole my name.

His eyes are unreadable in the club’s gloom. His head shakes.

“And I don’t seem familiar to you at all.”

Except that he does. If he’s the guy he claims to be, I know him well. And more importantly, he knows
me
. We’ve never met, breathed the same air, or seen each other’s faces before now. But he’s whispered in my ear, and I’ve whispered in his. He’s made me come, and this despite the fact that I haven’t let a man past my defenses in years.

“You’re not how I pictured you.”

I spare us both the cliché of saying that I don’t know what he’s talking about.

El aviso by Paul Pen
The House of Vandekar by Evelyn Anthony
The Metaphysical Ukulele by Sean Carswell
Everything I Have (Everything I Want #3) by Natalie Barnes
Her Minnesota Man (A Christian Romance Novel) by Coulter, Brenda
Murder At Wittenham Park by R. W. Heber
Tormenting Lila by Alderson, Sarah
Rachel and Leah (Women of Genesis) by Orson Scott Card
Impossible by Komal Lewis
The Princess Spy by Melanie Dickerson
Our partner