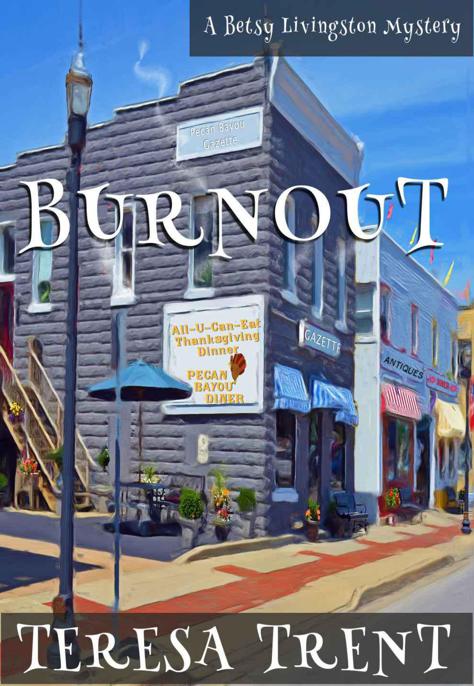 Thank you to Tammy Cuevas at Self Taught Cook for sharing her recipe for Slow-Cooked Chicken Noodle Soup and to Rachel, Susan, and Diane for all of their help in finishing the book.  Sometimes creating the little town of Pecan Bayou takes a village.

Other books in The Pecan Bayou Series

HELPFUL HINTS FROM THE HAPPY HINTER

Every end is a new beginning.

"What do you mean he's not in there? I left him just a few hours ago.  We have get in there and check! Why is everybody just standing around?"  Leo and my father didn't move. What was wrong with them?

I started running into the fire, but felt hands fastening onto my arms to hold me back. The Pecan Bayou Gazette building that had stood proudly on Main Street for sixty-three years now began caving in on itself as the white hot flames overtook the structure. The repository of Pecan Bayou's history-- the place that had recorded everything that happened in our corner of Texas for the past half century -- was now turning into a pile of burning beams.

Elaina leaned up against her squad car, cell phone in hand. "I've called him three times, but still nobody is answering."

It was all gone, the Pecan Bayou Gazette, a newspaper office that had told the story of our little town from basketball championships to church suppers, weddings and funerals.  It was all stored there, but the biggest loss was the man no one could get through the flames to rescue.

I had been in the Pecan Bayou Gazette office earlier in the day searching through some old issues that contained Thanksgiving recipes.  Many years ago Rocky published recipes from a Miss Caroline who wrote a much-loved food column.  She wrote about everything from deviled eggs to making pot roast.   I had been searching through some old issues that had contained some recipes for Thanksgiving.  Miss Caroline Ogilvy started out sharing some of her church's favorite potluck recipes.  According to Rocky so many people asked her to write down her recipes on cards for them that she believed it would just be easier if he printed them in the paper for her.  He did and they were a big success, and pretty soon churches all over Pecan Bayou were cooking up her dishes and calling them their own.

She was retired now, but her recipes were still good stuff. Her culinary delights became so popular that Rocky included them in the paper once a month and once a week during the holiday season. With the upcoming Thanksgiving holidays, I was happy to resurrect Miss Caroline's gold mine of information to help my readers cook the perfect turkey dinner .

"Where did you say Miss Caroline's recipes were?"

"In the filing cabinet, under C for Caroline."

"Of course, filing by her first name. Who would have thought of that?"

"Miss Caroline will be happier than a tick on a hound dog that you are using her recipes. She told me she didn't want to continue her column quite a while back, but I think she still misses being a local celebrity. You know she's a little touched, right?"

"I hadn't heard about that, but her recipe for cornbread stuffing was so good and was used by so many people that Aunt Maggie said  she saw it printed in the paper over in Andersonville."

"I should of known they'd steal my quality copy."

"Think of it as a compliment."

"It's hard to be humble when your stuff is good enough to steal.  So how are your two young men liking middle school?" Rocky asked as he peeled an apple from behind the editor's desk of the Pecan Bayou Gazette.

I sighed and shook my head. The boys had been on my mind a lot lately. Between the new school and all of their friends and activities, sometimes I felt like there was so much going on with Zach and Tyler that it was growing out of my control.

"I don't know," I said. "Tyler seems to be fitting in pretty well, considering he's a transplant from Dallas into our little town of Pecan Bayou. Zach, on the other hand, seems to be a little uncomfortable all of a sudden. He's gone to school with these kids since kindergarten, but he just isn't fitting in. Does that seem strange?"

"Come on, Betsy. Think about it. Tyler is the new kid in town. Worse than that, he's a kid from the sophisticated big city of Dallas. He's still a man of mystery. The spotlight is on him. Once they get used to him, things will settle down, and Zach will find his place."

"I guess you're right." I sighed. "I emailed you my latest column on getting water rings off of wood. Do you want me to print it out for you so that you can edit it?"

"Don't you worry about printing it out and having me edit it. I've got somebody to help me out with some of the paperwork around here now. I can handle it. One thing I can count on is my Happy Hinter articles. Wish Shorty was as conscientious as you are."

"You know that huntin' column he's supposed to be writing? He hasn't sent me anything in weeks, and here we are at the heart of deer season."

"Yeah, and maybe he's passed out in a deer blind somewhere." Rocky threw his apple core away, and then reached into his top drawer and pulled out a pack of antacids.

"Do you always have one of those things right after you eat, Rocky?"

"Not always, but I can already feel a stress induced acid attack coming on. I got the Pet of the Week lady coming in around ten. She's not too happy with me. I moved her pet picture to the comics page thinking it's a great place for the kids to be lookin'."

"Sounds like a good idea to me. Wasn't it next to the obits?"

"Yes, and she complained that if the little critter didn't get adopted, then why not just slide that picture on over to the dead column? She feels like I'm not taking in the gravity of the situation."

"Obviously she needs to spend a little more time reading the funnies."

The front door of the Gazette banged open as Phyllis Hamlin, the president of the PTA stomped in. "Mr. Whitson. A word with you."

I instinctively backed up to stand next to the water-cooler. Even though I wasn't thirsty I grabbed a paper cup and made myself look busy. I ran into Mrs. Hamlin three weeks ago on back to school night . Her son was older than Zach, and Tyler and I hadn't had too many dealings with her. On my first encounter with the woman in her official capacity she made sure I knew when the PTA meeting was and referred to me as a "little newbie mama". It made me feel like her latest conquest for her involuntary parent group.

She stepped up to the classifieds counter and slapped down a slim leather appointment binder. The streaks in her tastefully colored blond hair ran through her well-shaped page-boy haircut. She placed her hand on the pearls that hung at her neck. "I would just like to know why you put our middle school kid's football team picture so far back in your paper."

Rocky slowly rose from his seat and walked to the counter reminding me of a wildlife observer carefully stepping near an unpredictable animal. "How do you do," he said. He picked up the latest edition of the paper off of the counter and started paging through it. "The football team picture, you said?"

"Yes," he came to a page and folded the paper in the middle and set it on the counter in front of Mrs. Hamlin.

"Now, take a look at the top Missy. What does it say?"

Her artfully made up face took on an ugly sneer as she turned her head slightly to one side. "It says 'sports', but you see..."

"That's right." He interrupted. "It says 'sports', and what kind of group is this?"

"Very good. We like to put things in little categories here at the paper, and your sports team is on the sports page. As a matter of fact they're above the fold on this here sports page which in this business is prime real estate."

She rolled her eyes at Rocky's elementary explanation. "Mr. Whitson..."

"I am the president of the PTA at Nolan Ryan Middle School this year so I'm sure we will have weekly dealings. I am well aware of what is prime real estate in a newspaper and being buried on page 3b is not prime. I am here to advocate for our children, and from now on I would like to see their achievements showcased. Now, our football team has brand new uniforms coming in next week, and I think they should be featured on the front page above the fold as you say. I hope that's clear enough for you."

"Very clear and you have yourself a real nice day."

Phyllis Hamlin's eyes bugged out for a minute as she realized Rocky had slighted her once again. She picked up her notebook and headed for the door.

"Thanks for stoppin' in. Can't wait to see the boys in their new duds." Rocky called after her.

"Rocky! You can't speak to her like that. She's a big deal over at the school."

"Says everyone. Her husband owns and runs Hamlin Homes, and her son is the quarterback on that football team you buried."

"I did not bury it. I put it on the sports page where I put all the sports stories. I thought you women were good at organizational skills."

"Yeah, well she has a lot of power with the parents."

"Betsy, all I have to do is put her little angel, the quarterback, on the front page, and she's putty in my hands. I got a way with women, darlin' especially when it involves publicity."

Rocky pulled out his Zippo lighter and flipped the lid open and closed a couple of times. "Don't worry, I haven't taken up smoking.  This is a memento from the Korean war.  Even though I don't light up anymore, it calms me down just hearing it click."  He clicked it a couple more times and then rose and laid it on the corner of his desk.

"Being in the newspaper business isn't for the weak of heart, Betsy. There are some days when I don't even know how I do it."

Distant Blood by Jeff Abbott
Here in My Heart: A Novella (Echoes of the Heart) by DeStefano, Anna
The Phantom of Manhattan by Frederick Forsyth
Penance (Dark Alpha #5) by Alisa Woods
Halfskin by Tony Bertauski
Like Chaff in the Wind by Anna Belfrage
Irish Luck by RaeLynn Blue
Twisted Sisters (The Orion Circle Book 2) by Kimber Leigh Wheaton
Headless by Robert Thompson
The Day Before by Lisa Schroeder
Our partner