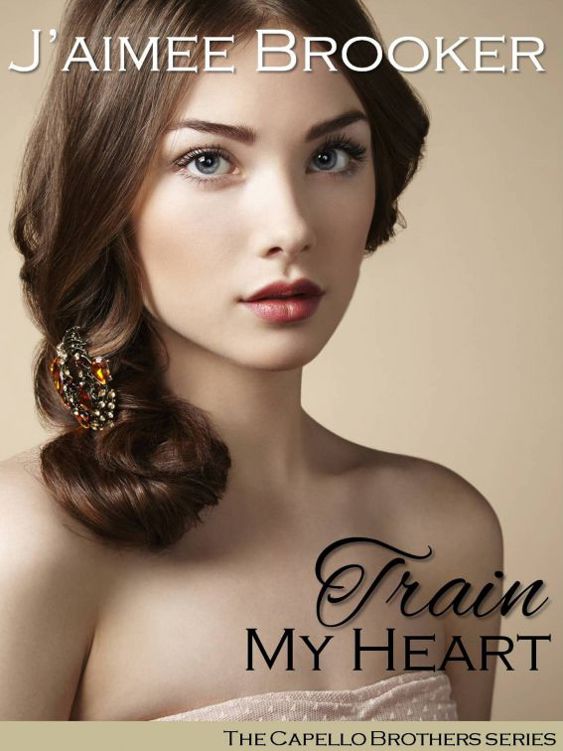 Being the youngest of three brothers has always
been one of life's greatest pleasures for Luca Capello, sheltered
from many of the hardships his family has faced and spoiled as the
baby of the family.

His successful
personal training business gives him the structure and routine he
wants and Luca's uncompromising attitude to fitness coupled with
his inherited handsome looks has always ensured a steady stream of
business.

But, growing up
without his father hadn't been easy yet from what he can remember
living with him in Italy had been worse. Luca's uncertainty about
his past has always bubbled beneath the surface and when his
relationship with his meek-and-mild girlfriend Imogen takes on a
new level of intensity, Luca resolves to explore his past in Italy
and make amends with the past.

From the busy
backstreets of Venice to the foothills of the imposing Italian
Alps; Luca's journey through northern Italy proves to be a
life-changing decision. Will he lose everything by confronting his
father; most importantly the love and future he has in mind with
Imogen?

More in The
Capello Brothers series:

Draw On My
Heart

About 'Train My Heart'

Excerpt: Draw On My Heart

The gym was
finally emptying; only a few last hardcore fitness fanatics stood
between Luca and Imogen’s next bout. She’d been impatiently waiting
all week to strap her gloves on and get rid of the week’s pent-up
annoyances and it was all Luca could do to kick these guys out so
he could have his girl and his gym to himself.

“Closing time
in ten minutes, guys” he called impatiently, to nods and murmurs of
agreeance from the last few patrons. Heading upstairs to get
Imogen, Luca realised not for the first time how much he cared for
his meek and mild librarian girlfriend.

It’d been a
chance phone call, almost three months ago, that had led to them
meeting. She’d sounded sweet, reserved, and even a little nervous
when he’d answered her call and he’d instantly been drawn into the
soft melodic tone of her voice; her every word rounded and polished
before it left her mouth. They’d agreed she would visit the gym for
a tour of the equipment the following day, and it was the first
time Luca actually hoped a prospective client would show. All too
often, they’d ring and get prices then never turn up. But this girl
had sounded different—genuine and sweet as opposed to many of the
pretentious women who frequented his gym.

“Imogen, you
nearly ready?” he called as he ascended the stairs to his upstairs
office.

“Just strapping
my ankle, I can’t afford to lose my footing again and let you win”
she teased back, referring to last weeks bout which saw her lose in
spectacular fashion. She strutted past him with strapping tape in
her hand before planting herself into his office chair.

Walking to his
chair, he pulled her up and dragged his lips slowly across hers
before hoisting her up and depositing her on his desk. A gorgeous
crimson glow hit Imogen’s cheeks as she leaned up to grab his mouth
again.

“Oh, Imogen,
that’s not really playing fair is it?” he questioned
tauntingly.

“Well, I’m at a
distinct size disadvantage, so I’ll do whatever I need to do to
distract you from your fine form Luca” she said, pulling away
slightly and dropping her lips to his neck.

“If that’s what
you’re up to, I’ll have to stop you right there” he replied,
pulling away from her seductive kisses before dropping into his
chair and nudging her thighs apart to sit between them. Running his
fingertips gently from the apex of her legs down to her sore ankle,
he grabbed her foot which was still looking a little worse for wear
and starting to gently smooth down the strapping tape.

“I’m not
fighting you tonight, Imogen” he spoke suddenly as she pulled her
foot back and stared at him questioningly.

“You said you’d
do the exercises I gave you Im. If you don’t want my help I can
refer you to another physio; but this ankle isn't improving and as
you’ve just pointed out, I’m too big to be a fair opponent” he
spoke calmly, knowing she’d be disappointed. “But, I know you need
the outlet, so how about tonight we do this a bit differently—you
box on the bags, hands only, we’ll sort out the physio business in
the morning” he replied, smoothing down the last of the tape.

He could tell
by the ashen look on her face that she was disappointed, but she’d
clearly done some damage to her ankle already and there was no way
he’d make it worse.

“Now”, he
whispered, his hands sliding up the outsides of her thighs before
he grabbed her ass and pulled her forward on to the edge of the
desk and planting a row of kisses along her thigh, “lets go and get
you hot and sweaty…”

“I… I think
I’ve got another option for taking my frustrations out tonight
Luca” she whispered, shuffling forward to close the distance
between them and shifting her weight forward and on to his lap.

His hands
immediately went to her as he gruffly threaded his fingers into her
hear and pulled her mouth to his. “Trust me Imogen, I’m happy to
oblige” he breathed in her ear, “but first, get your ass downstairs
and into the boxing room”. Luca replied, lifting her off his lap
and back on to his desk, his cock uncomfortably straining against
his shorts with every movement.

“Let’s go” he
said, before reaching for her sock and shoe and slowly easing her
foot in. Her grimace as the shoe went on was his confirmation that
she was hurting; for that he’d go easy on her tonight. Maybe.

“Imogen, ten
more. Go” Luca barked from the other side of the boxing bag, “put
some effort in this time”.

Though he was
no longer technically her personal trainer, that’d stopped after a
few weeks when it became clear that a relationship between him and
Imogen was a given, she’d asked him to keep her on track with her
fitness goals and he’d promised her he would.

“Imogen. C’mon,
harder. You know you can,” he shouted firmly, “keep going, five
more then you can rest”.

He saw
dedication laced with annoyance on her face and knew she was
pushing herself harder than normal, but it was his role to get her
to push that little harder, to extend that bit more effort and
energy.

Im, don't push
so hard, you’ve got this babe, just keep steady” he shouted back
encouragingly, holding the bag firmly as she struck it harder and
harder for the last few times.

“You got it” he
shouted to her before coming out from behind the bag and seeing her
bent over and gripping her ankle, her muffled sobs threatening to
shatter the hushed silence that’d fallen between them both.

Rushing to her
side, Luca swept her up in both arms and tucked her head against
his chest before walking over to a weights bench and sitting her on
the edge.

“Ankle?” he
asked, though he already knew it was the problem.

Something was
definitely wrong. Her ankle had always bothered her but she usually
hid the pain behind forced smiles and a nonchalant attitude.

Kneeling before
her, he slowly pulled her face to his and waited patiently for her
eyes to meet his before he wiped away her tears with the hem of his
shirt. “I’m going to look, ok?” he asked tentatively, knowing if
the pain was bad now it’d only increase once the support of the
shoe was taken away and the pressure it was holding in was let
loose in her body.

Slowly easing
the shoe off, he saw the exact moment the pain shot through her leg
and registered behind her eyes. Looking at the golf-ball sized lump
on the side of her ankle it was pretty clear she’d torn a ligament.
Gently prodding the area, he could feel the balloon like swelling
was still forming.

Standing, he
slid his arm under her legs and one behind her back and carried her
upstairs to his office—she was still hot from the workout but her
skin was cool and clammy, the pain obviously causing some shock.
He’d had plenty of patients in the years since finishing his
physiotherapy degree but this was the first time he’d treated
someone he cared about.

As he eased
Imogen onto the couch in his office, he noticed she’d stopped
crying but her eyes were dull and distant.

“Im, how bad is
the pain out of ten” he asked, kneeling beside her and holding her
hand.

“I… I’m not
sure… it’s high, maybe an eight…” she replied quietly, “what’s
happened, why’s my foot so swollen and… the pain, it’s…” she
trailed off.

“Looks like a
torn ligament, Im” he replied, before a fresh batch of tears
threatened to burst from her eyes.

“No, not that
Luca. Check again” she pleaded.

“I don’t need
to babe, I know what I’m seeing and it’s definitely torn. I’m
sorry”, he replied, knowing the setback of six weeks of minimal
movement would be just as painful for Imogen as the injury
itself.

Grabbing a
compression bandage, an icepack, and a couple of paracetamol, Luca
set about fixating the joint as best he could, knowing the drive
home would be painful; she’d need something stronger for the pain
but he’d have to get her home first.

“Luca, I need a
shower” she whispered a couple hours after arriving home. The
painkillers had kicked in, she’d eaten half a sandwich and had
finally calmed down.

“That bandage
has to stay on Im. It can’t come off or the pain will kick back in”
he replied.

“But, I’m
sweaty, I won’t be able to get any sleep like this. If I toss and
turn all night, won’t it be worse for my foot anyway?” she
complained.

“Imogen, I’m
serious, the bandage stays, at least until tomorrow”.

“But, Luca…
please” she moaned.

Smiling, Luca
looked over to her and teased, “Nothing I can do Im, unless you’re
keen for a sponge bath”.

Rolling her
eyes, Imogen almost dismissed the notion before realising that was
Luca’s final offer. “Ok” she murmured quietly noticing the
mischievous glimmer in Luca's eyes as he once again swept her up
into his arms and whisked her to the bathroom.

“Wow, you’re
not wasting any time Luca” she laughed as he walked them into the
bathroom and sat her gently on the edge of the bath.

“I don’t want
you to change your mind” he smiled back, winking playfully in her
direction.

As the bathtub
filled, Luca moved quickly to grab Imogen’s body wash and a
flannel. Standing before her, he slowly pulled her up onto her
steady foot, resting her hands on his shoulders for support before
sliding her shorts and panties down her tight and toned legs.
Running his hands back up her body, he reached her waist before
pushing her back to her seated position on the edge of the bath.
Reaching for the hem of her lycra shirt, he ran his hands up her
torso taking the top with him as he gently pulled it from her
body.