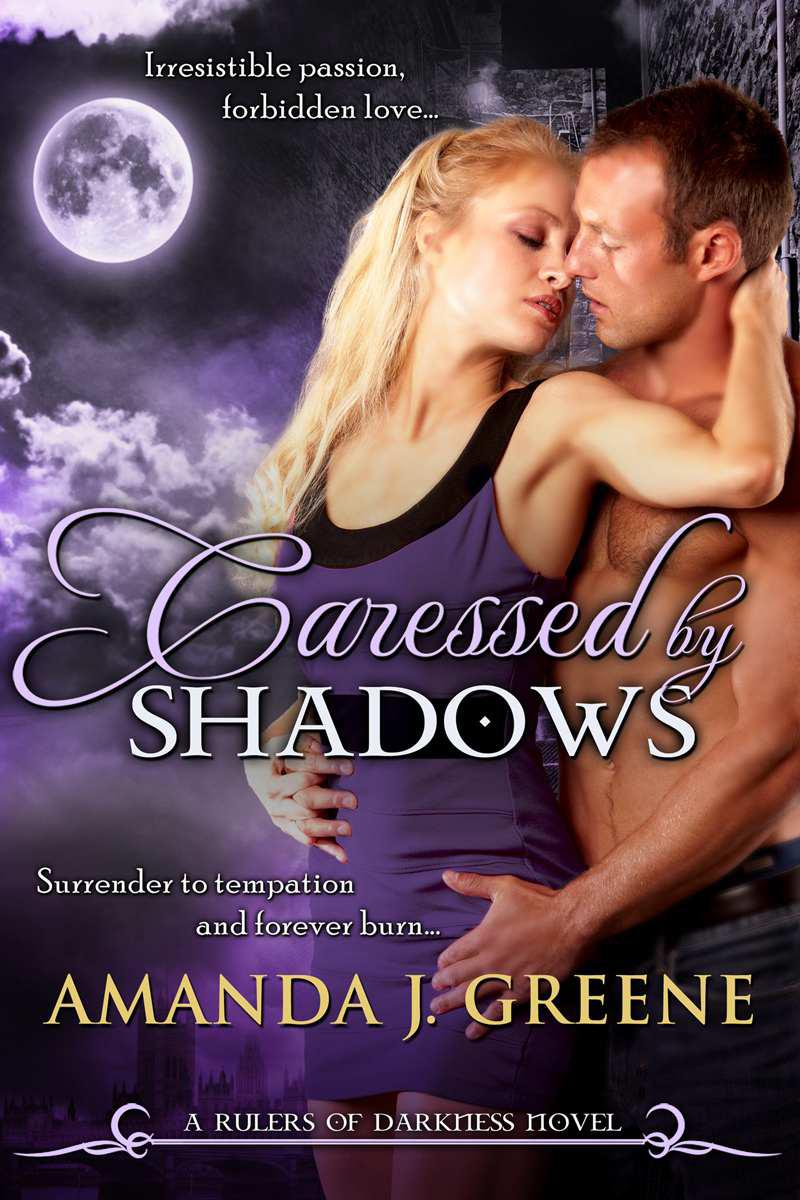 Sonya’s fangs burned and hunger knotted he stomach. Her body tensed as she resisted the urge to launch herself at him. She felt the demon within her stir. Her eyes turned black, her fangs sharpened.

“Falcon, you are certain,” she asked, her voice cracked, her throat suddenly.

“But I could take too much. I could weaken you. Or I could fall into a feeding craze.”

“And if you go off the deep end, I can handle you.”

She smiled. “Using my words against me,” she said with a smile.

He raised his hand to her, wrist turned upward. “Will you accept my offer?”

Sonya bit her bottom lip. Indecision twisted her thoughts. She wanted to scream yes, but she knew they should not go through with this. He was right, his blood would heal and strength her. But to know his taste and to never be able to drink from him again, that would be torture. Then again, her days were numbered by the curse. Besides, it wasn’t as if she had to worry about draining him or fall victim to the bloodlust. Falcon could handle her.

Sonya patted the mattress and Falcon joined her, keeping a respectful distance. He extended his right arm and she cradled his thick wrist in her hands.

Unable to make eye contact with him, she focused on the strong steady yet slow pulse beneath his tanned sin. She felt the tremor of painful anticipation rock his frame. Se shivered in response.

Sonya struck fast, her fangs cleanly slicing through his flesh. Falcon groaned and her eyes rolled back as his blood filled her mouth. He tasted better than she could have ever dreamed. Power was thick in his blood. Strength unlike any she had ever known fueled her. She felt her wound knit back together.

Her eyelids grew heavy, dropping until they finally closed from sheer pleasure. Good lord, nothing had even been so sweet, do delicious. More. She needed more.

Caressed by a Crimson Moon

No part of this book may be transmitted or reproduced by any means. This book is fiction. Characters, events, places, names, and etc. are either products of the author’s imagination or are used fictitiously. Any resemblance to any actual persons (living or dead), businesses, or locals is completely coincidental.

ISBN – Not Yet Assigned

You’re laugh, smile, sense of humor, charismatic, and fun loving attitude will be severely missed. I remember the first time we went to visit family in Tahoe. You and Robert were so crazy, jumping off a second story balcony wearing nothing but your boxers and landing in about five feet of snow.

We had some great times over the years. Just like you said I was your favorite cousin-in-law, you were mine as well.

I hope you know Robert and I love you and that you will forever be in our thoughts and in our heart.

I would like to thank all of my readers who were anxiously awaiting the release of the fourth installment in the Rulers of Darkness series.

I also need to thank my friend and family for their support, especially helping towards the end.

Binding Ceremony:
Takes place between a vampire and their mate through the exchange of blood. Their blood will mix and they both must consume the combined blood at the same time. They will bear the mark of their binding, a scar.

Black Knights:
The protectors of the vampire royalty and nobility and the enforcers of vampiric law.

Bleeder:
A human slave kept by a vampire for the use of feeding. This practice is outlawed, though it remains in use within the Outcast Society.

Death Curse:
A spell cast by the Shaman upon any vampire that becomes ruler of a Clan. This curse was created to limit the power and reign of the monarchs. It begins by attacking what remains of the vampire’s conscious (often times the king reports seeing the faces of those he has slain, thereby attacking their mind), hallucinations set in and the vampire begins to descend into madness. Next, the curse singles out the vampire’s emotions (they become overcome by grief, shame, loneliness, despair, etc.). While the curse twists their minds and emotions, an illness consumes the body. Death is always welcome in the end. The average reigning term of a monarch is 200 years. This has helped cut the numbers of the older, stronger, vampires.

Fathers:
Cassius, Uro, and Imbrasus. These three of the four purebloods shared their blood with humans, thereby creating fledglings. They also formed the vampire clans. Fathers can also be addressed as Sire. (Dimitri is a leader of a clan, though he has never created fledglings and is addressed as Sire.) Began to change humans to vampires when civilizations became strong.

Fledglings:
Humans that have been changed into vampires. A vampire’s strength is determined by four (4) factors. How hard the victim fought to hold on to their mortal life.

How strong the vampire is that is attempting to turn the human. The Purebloods possess the most strength, while their direct fledglings are the second strongest and so on and so forth. As the blood continues to be shared with humans, the vampire curse becomes more and more diluted. Example: the vampires that are made by the 16
th
generation will not be nearly as strong as those made by the 2
nd
, no matter what.

The passage of time. As years turn into decades and decades into centuries, the demon within (the vampire) grows stronger and some develop extra senses: mind reading, mind control, teleportation, and visions of the future.

Mate:
A vampire monarch’s lover. The Shaman, with his ability to see far into the future, knew that one day a ruler would come into power (one for each vampire clan) that would want to bring peace into the world of darkness. In order to save these rulers of the Death Curse, the Shaman created their mates. If the vampire finds their mate, they will never fall victim to the Death Curse. Though, there is no guarantee that the vampire will find their mate and if they do not, they will parish.

Mylonas Clan:
The very first vampire Clan to be formed. Created by Cassius, their territory consists of Southern Europe, every country that lines the coast of the Mediterranean.
Reigning monarch: Dorian Vlakhos

Outcast
e Society:
Made up of vampires who have been banished from their Clans or were changed into vampires illegally (without the blessing or the approval of the King). Generally they are the weaker of the vampire race, with few exceptions. Their territory consists of the United States, with some small factions scattered about Canada and South America. To protect themselves from the Red Order, they form groups, banding together.
The two largest groups within the Outcast Society are led by Gabriel Erhard and Boras Werner (competitive factions).
Also known as bastards, blood-bastards, or filthy-blood.

Pureblood:
The original vampires cursed by the Shaw: Cassius, Uro, Imbrasus and Dimitri. The proper way to address a Pureblood is Sire.

Rightful Ruler:
The intended monarch chosen by Fate to rule a vampire clan. They will bring about peace and be granted a mate through the spell created by the Shaman.

Second:
Also known as heirs. They are chosen by the current reigning vampire ruler to be their successor.

Shaman:
Leader of the Shaw. He is all-knowing and his magical abilities are limitless. He is continuously reincarnated; this helps his powers grow and insures that his knowledge of the past continues on. The Shaman can choose to retire, meaning he selects a fellow member of the tribe, generally from his direct bloodline, to pass on his strength and knowledge. Once he relinquishes his power and memories, he is free of the reincarnation cycle and will live out his life to finally pass on to the next realm.

Shape-shifters:
A species that appear human but can take the form of an animal. Also known as Weres. They separate themselves by animal type and live in packs/tribes. Africa, Asia South America, and some parts of North America are split up amongst the different factions. Generally live in small groups and amongst people. They share much of their territory with the Outcast Society. War is popular within their communities and peace is always short lived. One cannot be changed into a Shape-shifter. They can breed with humans, producing Half-Breeds.

Shaw Priestess:
Gifted witches who show great promise for strength. They are trained by Shaman and are highly respected within their otherworldly community. They are Seers, able to look into the future. They are assistance to Shaman and are members of his bloodline. Priestesses are pure of blood, meaning their blood, if given to a human, can grant immortality.

Soul Shattering:
When a human is on the verge of death and receives vampire blood, the transition from human to vampire begins. The blood is poisonous to a human; it eats away at the soul and conscious until the next full moon. Once the full moon rises, the transition begins; excruciating pain claims the victim as their body begins to morph into that of a vampire. At this point, the soul is weak and splinters under the pressure. In most cases, the soul dies and the human does not survive the transition. If the soul does not die, it is forever shattered – in pieces.  The human will awake a vampire possessing little humanity. They retain their memories and some of their emotions, though their conscious is almost non-existent. However, there is a way around Soul Shattering. When the human is being given the vampire’s blood, the vampire can press their hand over the human’s heart, thereby creating a shield around the soul, protecting it from the poison. A vampire is stronger if they possess their whole soul.

The Red Order:
Witches, who have very little magical power but possess great physical strength, they are the hunters of vampires. Also known as the Red Order Hunters.

Transition:
The process by which a human is transformed into a vampire. The human must be near death from blood loss and receive a vampire’s blood. Upon the next full moon, the change from human to vampire takes place. It is an agonizing event and most do not survive. Males dominate the vampire race because, for one reason or another, female’s bodies do not absorb the vampire’s poisonous blood well and often die when the blood first enters their system.

Validus Clan:
Created by Imbrasus. They claim Eastern Europe, beginning with the Czech Republic and advancing East, with the exception of Russia.
Reigning monarch: Hadrian Lucretius.

Volkov Clan
: Formed by the pureblood Dimitri. Territory belonging to this clan is Northern Europe and Russia. He created this Clan to give refuge to vampires over the years trying to escape persecution, slavery, and tyrannical rulers of their own Clans.
Reigning monarch: Dimitri Arsov.