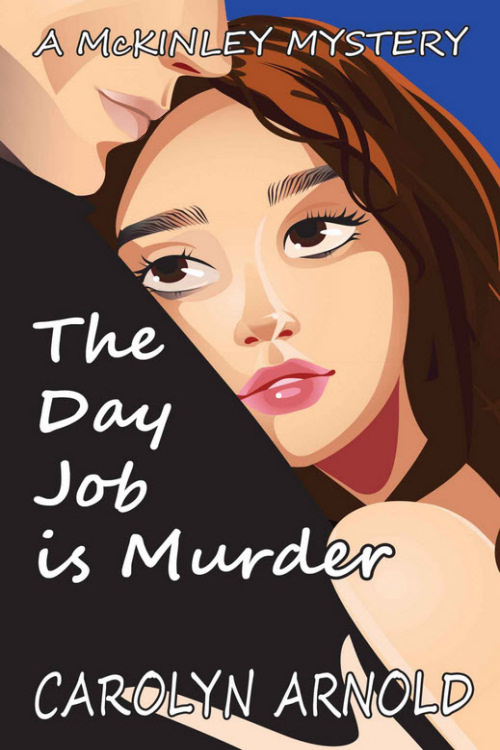 For Sean McKinley, working in Albany PD Homicide is great except for one thing—he's in love with his partner Sara Cain. And even though she feels the same way about him, she convinced him they should just remain friends. Two years later, nothing has changed.
Yet during the course of a murder investigation, when Sean finds out an old friend has died, it results in something that has the potential to change his life—and Sara's—forever. It goes to prove one unexpected act of kindness has the power to ripple throughout the years and bring happiness—even when The Day Job is Murder.

This book is a work of fiction.  Names, characters, places, and incidents are the product of the author’s imagination or are used fictitiously.  Any resemblance to actual events, locales, or persons, living or dead, is coincidental.

All rights reserved.  Except as permitted by U.S. Copyright Act of 1976, no part of this publication may be reproduced, distributed, or transmitted in any form or by any means, or stored in a database, or retrieval system, without the prior written permission of the author.

Thank you for purchasing this book.

special offers and information on her latest new releases

Chapter 7 - It’s All Coming Together

SEAN WENT TO WORK EVERY day, trying to forget the one issue he had with his job. It wasn’t the fact the cases never got brighter. It wasn’t the limited stretch of political tape and budgets governing every move. He was in love with his partner, Sara Cain, ever since she joined Albany PD Homicide two years ago.

He drove while Sara rode shotgun. He split his attention between the road and glancing over at her. Her birthday was in two days and he still had no idea what he was getting her for a gift, but between driving and his thoughts of that, he appreciated her good looks.

Unlike many of her female counterparts, who seemed to forget they were women once the uniform went on, Sara took care of herself. Her long dark hair was in a loose ponytail, but after shift, she let it fall in soft curls over her shoulders. Her eyes were shadowed in tans and browns and her lipstick was a subtle pink that matched her nails.

Her slender fingers hugged a to-go cup of coffee, and she tipped it back for a sip.

Sean gestured to her cup. “How many is that so far today?”

“Number three, and don’t get on my case about it.” She glanced over and smiled.

He laughed. “And it’s only ten in the morning. Should I be proud of you?”

“Now cut that out.” Her words said one thing, but her softened facial features and the brush of her hand in the air said the opposite—she loved him too. As she had laid it out to him, if they controlled their feelings they could spend every day together without the complications of a romantic relationship. So here they were, years later, still friends but he never stopped wishing for something more.

“How are things going with whatshername anyhow?”

“Whatshername? You can’t hide your jealousy at all, can you? Your memory is flawless.”

She shifted in her seat. “You dumped another one?”

“You make it sound like I have a lot of affairs.”

“No, I didn’t mean it like that. You put up a wall like you’re afraid of commitment, but I don’t think you are. I think you’re looking for Mrs. Right.”

The words slipped out before he thought them through.

“Yes, I know.” He hated the word. A few years ago, it would have been a different story, but now, having it come up in regards to the confined parameters of their relationship made his heart ache.

She took another draw on her coffee. “What did this one do, anyway?”

“She’s a little attached to her cat, who she named Binkie.”

“And for that you’re not going to see her again?”

“I think that’s a valid reason.”

“Well, that’s my prerogative isn’t it?”

“Yeah, I guess it is.” Sara turned to look out the window.

With the ending of the conversation, Sean’s mind settled on the case they were investigating. The victim, Mr. Cunningham, took a bullet to his chest. Crime Scene Investigators had discovered evidence that he had been tapping into his neighbor’s cable, and racking up huge bills in pay-per-view movies and events. That made his neighbor, Colin Burton, the man they headed for now, their prime suspect.

Sean held up his badge to the receptionist, a petite lady in her mid-thirties. “We’re looking for Colin Burton.”

Sara noted how the woman smiled at Sean, and jealousy spiked through her system. He could have any woman he wanted, and she had to stop entertaining the notion it would ever be her. She had seen to that, hadn’t she?

“I’ll page him to the front immediately.” The receptionist had a whimsical expression etched into her face and her jaw slid askew as her eyes went over Sean.

Sara glanced at him. He wasn’t even six feet tall, but he was solid and muscular. He took care of himself, opting to drink only one mug of coffee a day, giving preference to a glass of orange juice over the popular caffeinated stimulant. His face was always shaven, his brown eyes clear and intelligent, and he exuded charm.

Sara’s eyes went back to the woman and she smiled politely, while swallowing the inclination to glare at her instead. She cleared her throat.

“See, it’s all that coffee you drink. It’s not helping your immune system,” Sean said.

She knew he was referring to her cough. “Uh-huh.”

Colin Burton approached. He was a stocky man who basically waddled in, rather than walked. His deeply-set pale brown eyes focused on them.

They had spoken to him before, briefly, at his house, but hadn’t taken him in for further questioning at the time. However, as they reviewed the case and discovered that the high cable bills nearly resulted in a bankruptcy claim, their interest in Burton increased.

Sean put his hand on Burton’s shoulder. “We’re going to need to take you downtown for some questioning.”

“Am I under arrest?” He shrugged free of Sean’s grip.

“You aren’t yet, but we’d appreciate your cooperation.”

The receptionist watched, with large eyes and a gaping mouth, as Sean lead Burton out the door.

She leaned over the counter and asked Sara, “He single?”

“Oh, even better. Give him my number.” The woman quickly scribbled on a sticky note and passed it to Sara.

Sara smiled, but she had crumpled the paper into a tight ball in the palm of her hand by the time she got into the car.

“Watch your head.” Sean guided Burton into the back seat.

“You haven’t cuffed me. That means I’m not under arrest.”

“If you’d like the full experience, I could put them on you.”

Sara glanced over her shoulder to see Burton’s face pale.

“Like I thought,” Sean said and then made his way to the driver’s seat, where he clicked up his belt, and turned the ignition.

“See, you could have any woman. She was interested.” Sara pointed to the building.

“Sara, let it go. I don’t need a matchmaking service.” He paused to smile.

He must have sensed she was uncomfortable. Her fist clenched around the note. It would have a home in the first garbage can she came across.

He continued, “I’ve already made my stand cl—”

“Lovely. I’m not sure which is worse—the sound or the—oh, it’s definitely the smell.” Sean covered his mouth and lowered his foot on the gas.

Sara was bent over, inside the back of the department-issued sedan. “I can’t believe we’re still cleaning puke.”

“Some days are better than others.”

She smiled. “Leave it to you to always look at the bright side.”

“Well, I consider that progress.”

“Easy to say when you’re not the one doing the cleaning.” She tossed the used towels in the garbage, returned the cleaner to the shelf, then picked up her coffee cup, taking a draw.

“You insisted. We could have gotten a uniformed officer to take care of it.”

“Yes, I know. Our car, our responsibility. You’re too good to be real, you know that?”

“There you go again.”

He shrugged and kept pace with her on the way to the interview room. Outside, she placed a hand on his forearm.

“Oh, I meant to tell you something.” She glanced in at Burton, and then back to Sean. “It’s probably poor timing now, but you still have time.”

She peered into his eyes and seemed to be studying them, assessing something. What, he wasn’t sure. So, while she probed his eyes, he appreciated the color of hers—brown with flecks of green and gold.

“I was reading the obits this morning and I came across the name Douglas Quinn. You knew him, didn’t you? I remember you mentioning him.”

His breathing paused. Old Man Quinn. It had been a long time since he’d heard that name, but he’d never forget him.

“His funeral is this afternoon at three o’clock. You have time to make it.”

“Nah, I have, we have—what happened?”

A Passion For Pleasure by Nina Rowan
A Murder of Taste: A Queen Bees Quilt Mystery by Sally Goldenbaum
Sold (Keeping her in the Dark) by Sansom, Leslie
My Runaway Heart by Miriam Minger
Hija de Humo y Hueso by Laini Taylor
The Deepest Cut by Templeton, J. A.
City of Scars (The Skullborn Trilogy, Book 1) by Montano, Steven
Madhattan Mystery by John J. Bonk
Yuletide Enchantment by Sophie Renwick
Lead Heart (Seraph Black Book 3) by Washington, Jane
Our partner