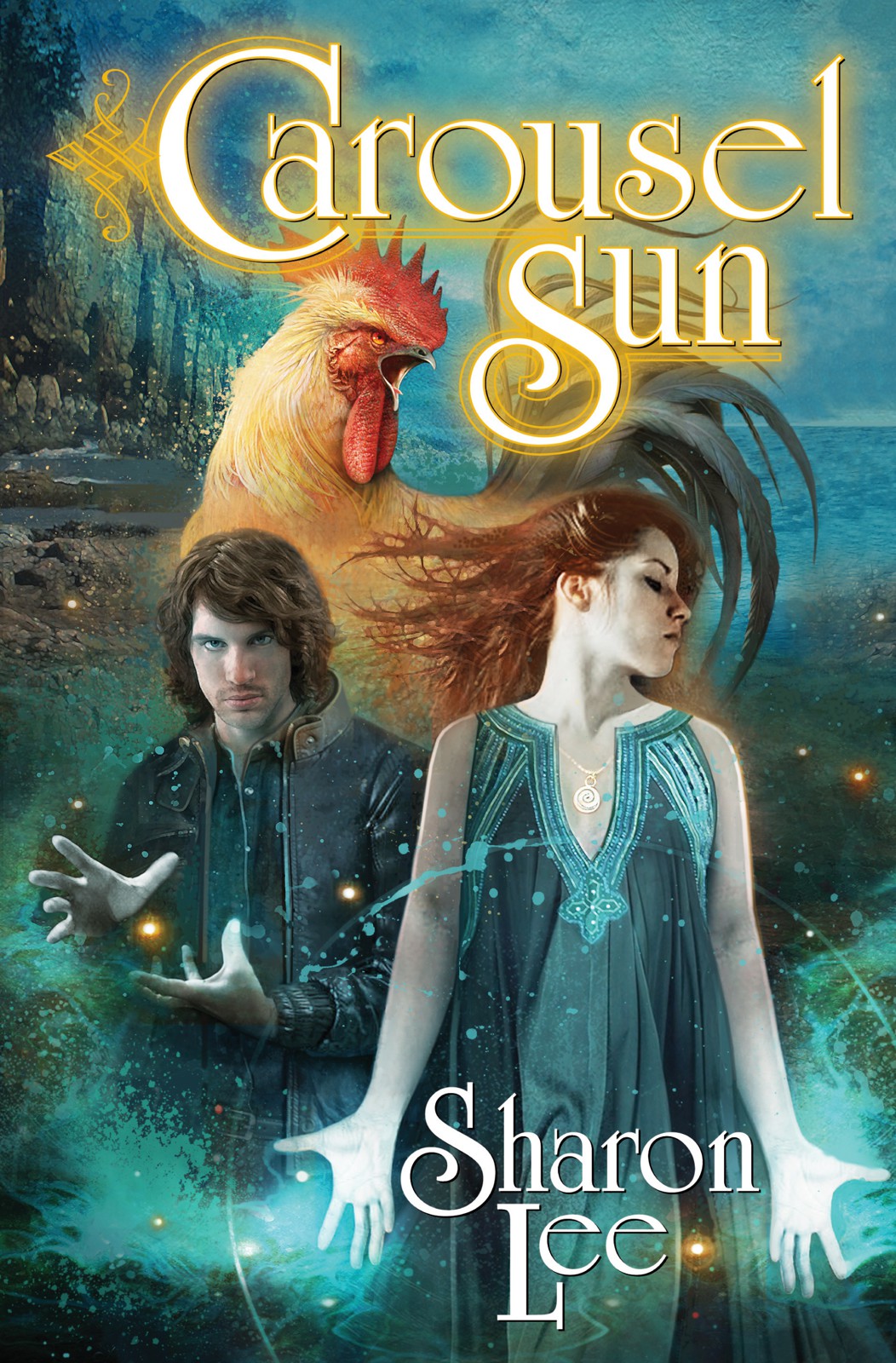 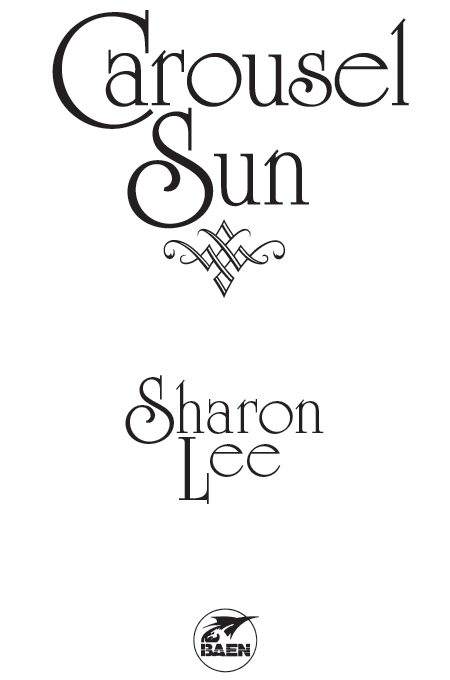 The long-awaited sequel to
Carousel Tides
, enchanting contemporary fantasy by Sharon Lee, award-winning co-creator of the popular Liaden Universe® saga. When magic meets mundane, sparks fly: these are exciting times in Archers Beach, Maine! A unprecedented Early Season has united townies and carnies in an effort expand into a twelve-month resort, recapturing the town's former glory.

Kate Archer, owner-operator of the vintage wooden carousel, is caught up in the excitement—and is quite possibly the cause of it. Because Kate leads a double life, as carny, and as Guardian of the land. Her recent return to the home she had forsaken has changed the town's luck—for the better—and energized the
trenvay
—earth and water spirits who are as much citizens of the Beach as their mundane counterparts.

But the town's new energy isn't the only change afoot. Joe Nemeier, the local drug lord, whose previous magical consultant was vanquished by Kate, has acquired a new ally—and this one plays with fire.

a Vixen the Slayer T-shirt

Jean Guerin, curator of the Harmon Museum and

for sharing her encyclopedic knowledge of the

. . . and Jeanne Bartolomeo, who generously hosted

Archers Beach, Maine, is a fictional town, though it owes portions of its history, coastline, and geography to the communities of Old Orchard Beach, Ocean Park, Kinney Shores, Camp Ellis, and to the Rachel Carson National Wildlife Refuge.

The Chance Menagerie Carousel at Palace Playland in Old Orchard Beach occupies roughly the spot where one would find the Fantasy Menagerie Merry-go-Round in Fun Country at Archers Beach.

The sun had been up for hours, which was more than I could say for myself. I carried my first cup of coffee out onto the so-called “summer parlor,” the covered porch facing the dunes, leaned my elbows on the railing, and looked out to sea.

Tide was almost in, and the sound of the waves was a constant sizzling boom. The leading edges of the breakers were brilliant with lacy white foam, while far out swells, faceted like jewels, caught the sun and gave it back in dazzling bursts of light.

Straight out, I could see the rocky islands, Blunt and Stafford, through a light haze. To my left—north, that would be—Cape Elizabeth Light was wearing a misty tutu, and Wood Island Light—south—was a silhouette inside a thicker bank of fog. What breeze there was came off the shore, bringing me a faint, sweet scent of flowers.

I sipped coffee, and sighed.

It was good to be home.

Shadow wings flashed over the sparkling water, and a gull laughed, derisive and high.

I grinned and shook my hair back from my face.

The laptop was chiming gently when I stepped back into the year-round parlor. I had mail, that particular chime meant. Nodding, I went past the coffee table where I’d set the machine up, temporarily, seven weeks ago, heading for the kitchen and the coffeepot.

A couple minutes later, being careful of the maps and guidebooks piled to one side, I sat down on the couch, put my refilled mug carefully to the right of the computer, and tapped a key.

I’d hit the jackpot this morning—two emails were in-queue and awaiting my attention, up from the more usual nothing, or the very occasional piece of spam that got past my filters. I build some
bad
email filters; just by way of putting my education to use.

There’d been times, during the years I’d been away from home, slinging code out in the dry lands, far removed in so very many ways from the Maine seacoast, when I’d gotten hundreds of emails over the course of a day—and answered them all, too.

Well. Now wasn’t then, and two were plenty for this morning.

First up was a letter from one Peter Knorr—Painted Pony Pete, as he’s known among the community of carousel-keepers. That was . . . mixed news. Pete wasn’t exactly a rip-off artist.

But he wasn’t exactly honest, either.

He was, however, a gentleman of the Old School, so he started with the courtesies.

I read with dismay that the Jewel of Northeast Wooden Carousels, Archers Beach’s own Fantasy Menagerie, has met with misfortune. To have lost one of those venerable, priceless, wooden animals—my heart goes out to you, your family, and every one of the carousel’s many supporters and friends.

So great was my dismay that, upon learning of this tragedy, I vowed that I would not rest until I had located a suitable replacement, and seen it installed on the Fantasy Menagerie Carousel.

You’ll realize that this was no small task I undertook on your behalf, but I write to you now with news of success!

I have located a replacement for the animal that was stolen: a signed and dated Looff stander. It’s not perfect, of course, but it can be easily restored. And while I naturally can’t reveal my sources, I will share with you, Ms. Archer, my firm belief that this horse is one of those few which were rescued from Dreamland—

I shook my head, grabbed my mug and sat back on the sofa, trying to decide if I was offended or just blackly amused.

Dreamland at Coney Island burned down in 1911, and if anybody rescued anything from the flames beyond their lives, this was the first I’d heard of it.

Also? Looff hadn’t signed or dated its horses, though the factory had branded some few inside the box with the legend, “Made by Looff.”

Which any carousel-keeper over the age of eight could tell you off the top of her head, while counting people through the gate for the next ride.

“Does
Kate Archer
translate into
Born Yesterday
in some language I don’t know?” I asked the empty parlor. I had another swig of coffee, and decided that I could go with being mildly amused. You couldn’t, after all, blame a man for trying.

On the other hand, there was nothing in Pete’s email that seemed to me to be worth the courtesy of a reply.

I leaned forward and hit the delete key.

Second email up was from Dan Muldoon, archivist for the Wooden Carousel Census. Dan wondered if I’d checked in with the Cleveland Trust for Public Land, which had the keeping of what was left of the Euclid Grand Beach Carousel. That was a Philadelphia Toboggan Company machine, Dan added, helpfully. He went on to say that there’d been talk of restoration, but it’d been thirty-seven years since Euclid Beach Amusement Park closed, and the horses and chariots were still in storage. It could be the Cleveland Trust would be willing to sell—even sell reasonably—to help keep another wooden carousel running.

As it happened, Dan wasn’t the first to suggest that particular course. I’d called the Cleveland Trust for Public Land three weeks ago, on a tip from Gracie Adler, the carousel community’s unofficial great-auntie. The secretary there had given me the number for the Carousel Trust.

Long story short, the carousel horses, which had been restored, were currently on display at the Western Reserve Historical Society, and Terry, the chair of the Carousel Trust, had big plans to see the machine operating again “within the next five years.”

Given all the enthusiasm coming down the phone line, I believed that, and sincerely wished them all the best of good fortune with the project.

Though it did leave my own problem in an unresolved state.

My
bright idea had been to buy a new animal, and
that
led me to call an up-and-coming carver down to Binghamton, New York. We had a good, long talk, him and me—he’d been raised up in carousel-keeping, too, and knew a rounding-board from an orchestrion. Hell, he was actually excited to hear that Fantasy Menagerie’s orchestrion still played its original paper rolls, and grilled me about the twenty-two animals that were left, what wood were they carved from, how many standers, how much brass did we show, did we have a working ring arm, and . . .

Well. Pleasant visit though it was, in the end we couldn’t do business. For one thing, he needed not only the traditional arm and a leg for his work, but a couple fingers and the thumb from the remaining hand.

The second thing was he didn’t have any animals under construction that weren’t already spoken for, and his delivery date for a commissioned piece was well after Archers Beach Season was through.

There in the parlor, my coffee gone, I hit reply, and typed a note thanking Dan for his care, outlining the current situation of the Euclid Grand Beach Carousel, and giving him the phone number for the Trust. Good information for an archivist to have.

That taken care of, I came to my feet, stretched, and stood for a long minute, looking at nothing much, but seeing the carousel in my mind’s eye.

Season Opening was just one week away, and replacement carousel animals were demonstrably
not
thick on the ground—which I’d known when I put out my call for aid. I figured my luck was about run out.

Which meant it was time to move on to Plan B.

I’d been hoping it wouldn’t come to that; hoping for a miracle, really, and running the ride with one horse down. That was—not fine, exactly, but good enough for the Early Season weekend schedule, and I’d been able to string Marilyn, the park manager, on with the assurance that I was aware of the problem and was working on a solution.

Marilyn had been unusually mellow about it—which I guessed was left-over euphoria from the surprisingly successful Super Early Season, back in April. But you betcha I’d better be showing a full complement of twenty-three animals and one chariot come Opening Day, or I’d be seeing a fine from Fun Country for every day the ride was “broken.”

I sighed, ran my fingers through my hair and headed for the shower.

Some while later, showered and dressed to meet the day in sneakers, jeans, a pale green ringer tee with
Archers Beach Maine
printed on the left breast, and a long-sleeved denim shirt worn untucked over all, like a jacket, I opened the front door, and looked down.

The
Biddeford Journal-Tribune
lay facedown on the welcome mat. I picked it up, and flipped it over to glance at the headline.

Now,
there
was something to make the day a little brighter!

I leaned against the doorjamb and ran my eye down the front page.

Disappointingly, Joe Nemeier, Archers Beach very own drug lord, didn’t figure in the thrilling story of a Coastie/MDEA collaboration, culminating in the dark moon pickup of a small barge loaded with plastic-wrapped bales of marijuana—in excess of one million dollars’ worth of marijuana—at a tricksy little inlet where Elm Brook came into the ocean at Pine Point, which, as a location, was . . . interesting.

None of the names that did make the paper were known to me, which was a surprise. I’d’ve thought that the barge-runner, at least, would be local, given the piece of shore they’d been putting in to. It wasn’t like Archers Beach was any stranger to the smuggler’s trade. Over the centuries, anything that could be brought in illegally ran through the Beach, Surfside, or Pine Point, and there’s families old in the business local to all three towns.

Well, I thought, folding up the paper and turning to toss it inside the house, it was almost certain that the bustees had been working for Joe Nemeier, and losing that cargo had to give him a pain in the pocketbook. Couple more seizures and maybe the man would catch the notion that he wasn’t welcome, and leave.

Wouldn’t
that
be fine?