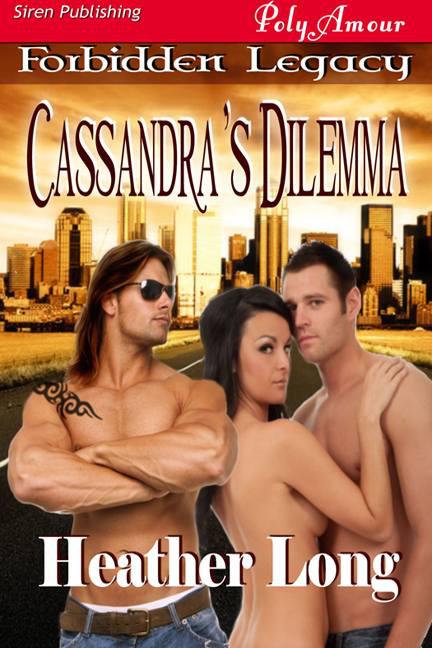 A woman on the edge.

Cassandra Belle is about to break the story of the century. But one well-placed bomb devastates her plans and leaves her on the run and in a fight for her life and her heart. Caught between wild allure and primal need, Cassie is torn by the desire to submit to both of them.

Two enemies on a mission.

The sexy Fae lord Helcyon wants to protect her, but his pleasure leaves her quaking at the loss of control. The dangerous Wizard Jacob wants to save her, but his war with the Fae frightens her even as he captivates her with passion.

With her enemies closing in, Jacob and Helcyon must challenge everything they’ve ever known to work together or risk losing her.

by Heather Long from BookStrand.com or its official distributors, thank you. Also, thank you for not sharing your copy of this book.

This is Heather Long’s livelihood.

It’s fair and simple. Please respect Ms. Long’s right to earn a living from her work.

For my girls, each and every one.

“Peppermint mocha, just the way you like it.” Billy pressed the hot cup of coffee into Cassie’s grateful hands. For three years, Billy worked as her executive assistant. Cassie hired him the day he graduated from UCLA with a bachelor’s in communication.

Herds of butterflies stampeded in her stomach. Her attention focused on the most important event of her career being set up in Chicago’s Grant Park. Cameramen were getting into position, and light meters were tested. The podium stood forlorn in the sea of cables, cameramen, and reporters.

This has to go just right. No mistakes. No “oops.”

Some of those reporters checked their makeup, and others caught a quick smoke away from the thick of the crowd. Cassie’s face wrinkled as the crisp smell of burning tobacco brushed her nose.

“You don’t want one,” Billy reassured her automatically as he flipped open a notebook. Six months since she’d quit smoking, and Billy remained her staunchest supporter. He always seemed to know when the urge hit her and distracted her automatically. Cassie suppressed a smile. It was one of his more endearing traits.

“Press conference starts in thirty minutes. Our guests of honor are preparing in the Park House. The caterers prepared the fruit and cheese table with wine and left it to your exact specifications. They will not be disturbed. Security is in place and ready to escort them before and after the press conference.” Billy’s pen scratched against the paper as he made a notation. “Jasmine called and rebooked your appointment with the governor from two to five p.m. She also said it might be pushed off again.”

“It won’t,” Cassie murmured and took a sip of the dark-chocolate and peppermint confection. Drinking her liquid York Peppermint Pattie soothed her nerves.

Weeks of planning would shortly come to fruition. “In fact, keep my afternoon clear. I expect the governor will be bumping me up by lunchtime.”

“I ordered a tray of cold sandwiches and water to be stored in the car. If he does move the meeting up, you can eat on the way.” Billy made another notation. “Michael called…”

“I don’t have time for Michael today.” The man disliked being left out of any decision. Three years as her partner didn’t seem to compensate for the two spent as her mentor. Worse, ill-thought kisses brought on by success and too much champagne led to an aborted passionate encounter which only served to increase his demands that she report on every action or activity. If she could just go back in time and not drink the champagne or allow his embrace to turn amorous. He’d complained about her secrecy for weeks.

The caustic attitude was hardly going to endear him to their clients, so when it seemed he wouldn’t be mollified, she’d just ignored him. She shoved thoughts of her business partner out of her mind.

He’ll come around, Cass. Wait till he sees the media firestorm we generate. He’ll forget all about being pissy.

“I told him you would return his call sometime next week.” Billy’s tone suggested that Michael’s response had been less than enthusiastic. A pang of regret filtered through her focus on the unfolding event. Billy was hardly in any danger from Michael. While attending meetings in her stead, he’d become an expert at handling her partner.

“I am sure he didn’t like that.” She glanced at him, but he was checking his lists again.

Cassie’s lips turned upward at what Billy wasn’t saying. Michael found it infuriating when she pushed him off. “Don’t worry about Michael, Billy. He’ll huff and he’ll puff, and if you just put him on ignore until he’s done, you can remind him that I choose my own clients, not the other way around.”

“Yes, ma’am.” Billy voice betrayed little humor as he snapped shut the notebook and picked up her briefcase. He gave her figure the once-over with a professional, discerning eye. He was better than a mirror. Billy understood exactly what she analyzed in their postgame meetings, what she liked about her appearance, and what she didn’t.

Gem that he was, he’d tell her if she needed a makeup refresh or a brush to her hair. She’d chosen her appearance with care for today. Her thick, reddish-brown hair, pulled back in a single ponytail, looked neat and businesslike. Her crisp Donna Karan suit almost matched her hair color, and the pumps she wore had been dyed to match. She wore a pair of simple diamond studs at the ears and a pair of darkly colored black sunglasses. It was professional but forgettable. She only needed to hold the crowd’s attention for a few moments. Her clients were the glittering stars shining today.

“Shall I head down and double-check the microphones?”

“Thank you, Billy.” Cassie turned away from surveying the crowd to give him a fast, genuine grin. “I’m going to take my ten with coffee.”

It was more about drowning the butterflies with her coffee. Nervousness left her back damp with sweat, but she controlled the urge to babble like an idiot. Stage fright was nothing new to her. Despite her five years in the business, publicity and cameras still left a choked feeling in the back of her throat.

“Yes, ma’am.” Billy strode away, his long, lanky legs eating up the distance between the parking lot and the bandstand where the announcement would take place. Grant Park’s Clarence Buckingham Memorial Fountain sprayed in the distance.

Cassie tilted her head and glanced up at the sky. The unexposed sun warmed her face. If the sun actually came out from behind the clouds, as her clients had promised, it would be a gorgeous, warm spring day after a terrifically brutal winter.

The sound of the water replaced the distant chattering of the press corps. The corner of her mouth quirked upward as she envisioned all those voices to be geese and water fowl rather than journalists waiting to hear why a wealthy benefactor had summoned such a large press conference. She’d initially planned the conference for the steps to the museum, but the clients preferred the open space of the park with Lake Michigan spread out in the distance.

Everything was in place. Billy performed last-minute checks. Her watch vibrated. She glanced at the dial face before pressing the alarm off. She would walk down and in five minutes begin her opening remarks. Skin flushing, Cassie took a deep breath and buried her nervousness under the veil of professionalism. In a few short minutes, she was going to be at the center of a news story that would cascade throughout the nation and eventually the world.

Tipping the mocha cup back, she drained down the peppermint and chocolaty sweetness. Touching a finger to make sure the corners of her mouth were clean, she disposed of the cup into a trashcan. Her gaze found Billy on the bandstand. The air buzzed, humming like a bug zapper on her grandmother’s back porch.

He gave her the thumbs-up.

The image scorched on her mind’s eye as the detonation picked her up off the ground and flung her like a rag doll. It was quiet, like those hushed moments in the middle of a snowstorm when the world holds its breath. But it wasn’t snow falling.

Why would anyone throw that much paper in the air?