Trouble Me: A Rosewood Novel 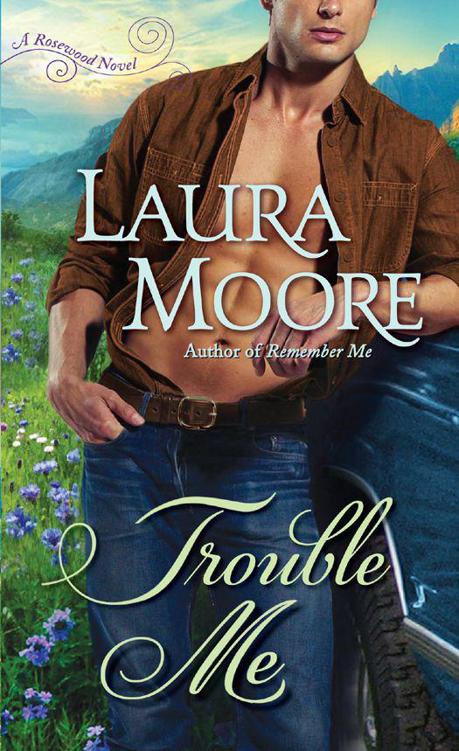 Trouble Me
is a work of fiction. Names, characters, places, and incidents are the products of the author’s imagination or are used fictitiously. Any resemblance to actual events, locales, or persons, living or dead, is entirely coincidental.

This book contains an excerpt from the upcoming Book One in Laura Moore’s new Silver Creek series. This excerpt has been set for this edition only and may not reflect the final content of the forthcoming book.

Excerpt from
Book One of the Silver Creek Series

J
ADE
R
ADCLIFFE
had her iPod plugged in and the volume cranked. But while the Black Eyed Peas were doing a fine job of keeping her awake after so many hours on the road, her Porsche’s windshield wipers weren’t doing squat. Even set to high, they couldn’t compete with the rain that was coming down in buckets. Route 95 had become a regular Slip’N Slide. While sliding over water-slicked surfaces was a favorite summer amusement of her nieces and nephews, Jade had been driving too many hours. Her initial “whee”s whenever the Porsche lost traction had turned into tired complaints of “oh, shit.”

The traffic had slowed to a crawl, making the driving marginally safer. But at this speed there was no way she was going to reach Warburg tonight. When she left Ocala, Florida, this morning, she was confident that she would reach Rosewood, her family’s home in Virginia, by dinnertime. She badly wanted to see them all: Margot and Travis and their kids, Georgiana, four, and Will, nine months old now and thus starting to get interesting. Margot was so besotted she sent Jade daily email updates with photo attachments chronicling Will’s achievements, just as she’d done for Georgie. Jade was the only person she knew whose computer kept running out of storage space because she had so many e-photo albums of babies staring up at brightly colored mobiles or giving toothless grins in their high chairs.

The cute munchkins populating Rosewood didn’t stop
there. Now there was also Jordan and Owen’s baby boy, Edward, nicknamed Neddy, who had been named after Ned Connelly. Having worked his entire life at Rosewood Farm, Ned was like family to Jade and her sisters; Owen and Jordan’s gesture had made the old man nearly burst with pride and joy.

And when it came to being completely gaga over their new baby, Jordan and Owen rivaled Travis and Margot.

Earlier in the spring, Jade got a video of Neddy taking his first steps, with Owen filming and narrating the clip. Owen was a pretty cool guy. Suave and sophisticated. But from the excitement in Owen’s voice, Neddy could as well have been Neil Armstrong taking that first step on the moon for mankind rather than tottering toward his big half sister Olivia’s outstretched arms, while the rest of the Rosewood clan cheered him on.

Neddy would probably be fairly steady on his sneakers by now, and doing his best to keep up with his older half brother, Max. Kate, the oldest of the bunch from Jordan’s first marriage, was showing in children’s hunter classes and doing a really fine job on Doc Holliday.

Yeah, Jade definitely wanted to be back in the Radcliffe–Maher–Gage fold, insane though her sisters were sometimes. She’d missed everyone this summer while she was down in Ocala, but now, in addition to having a brand-spanking-new degree in education, her training session in Florida had given her the right to boast that she was certified as a hunter/jumper trainer by the United States Hunter Jumper Association. It would come in handy when she began spreading the word about the riding program she was starting at Rosewood Farm.

Through the swish of her windshield wipers, Jade saw the sudden bright flare of brake lights as the cars ahead of her went from a crawl to a stop, turning the highway into a long, thin, rain-drenched parking lot.

She sat, drumming her hands to Phoenix’s “1901”
and jiggling her legs against the leather bucket seat so that at least
something
was moving. Damn and double damn. The dashboard clock read nine-thirty
P.M.
and she hadn’t even reached Norfolk yet. There was no way she’d make it to Rosewood tonight. It wouldn’t be right to show up on the doorstep at 1:30
A.M.
and wake Margot and Travis. Moreover, if Margot heard that Jade wanted to push on through in a storm this bad, she’d freak.

Perhaps she’d show Margot—and Jordan, as Jade knew Margot would get on the horn to their older sister within seconds—how much she’d matured. Leagues removed from the Jade of yesteryear. And it was even all right to pick up her cell and speed-dial Margot’s number, since the car hadn’t moved an inch since she’d made her decision.

Margot answered on the second ring. “Jade? Where are you? God, it’s pouring and the wind is picking up.”

“Norfolk! That means you still have a good four hours of driving.”

More than that, Jade thought, since every car around her was going nowhere fast. A flash of lights in her rearview mirror alerted her to an ambulance coming up the breakdown lane. “There must be an accident up ahead. An ambulance just drove past. Listen, I’m going to get off at the next exit and find a place for the night. But I’ll hit the road first thing, so make sure somebody does a Braverman’s run, okay? I’ve been dreaming of their cinnamon raisin bagels for the past two nights.”

“Stopping for the night is a very good idea.” Surprisingly, Margot didn’t sound stunned speechless by Jade’s announcement. “But, Jade, make sure it’s a nice place and well lit.”

“That’s fine. And use the credit card on my account, sweetie. I want you to have a nice night.”

“No need to get carried away,” Margot replied with a laugh. “But you’ll remember to call, right? I won’t be able to sleep until I know you’ve found a place and are safe and sound.”

“I’ll call,” she promised before hanging up.

As Jade’s legal guardian, Margot had probably passed a lot of sleepless nights while Jade was off at college. She’d have passed a lot more of them if she’d known some of the things Jade got up to on the weekends when she wasn’t competing with the collegiate equestrian team. A good acre of wild oats had been sown.

That was the Jade of old, the one who sometimes felt the need to step right up to the edge and do something crazy with a wild, fiery lick of danger. But though she’d had her share of parties and experiences, it hadn’t prevented her from getting straight A’s even with a supercharged course load, being the top scorer on her riding team, and writing a very popular advice column for the school paper.

The four years of parties and serial relationships (she liked the sex just fine, but her life had been way too busy to bother with the guys afterward) while she earned her college degree were over. She was returning to Warburg with a plan she intended to execute with the precision of a military campaign, her ultimate goal being to banish her hometown’s less-than-fond memories of her by turning into the most model of model citizens. From now on, her activities would be restricted to teaching at the elementary school, training Rosewood’s horses, and concentrating
on building a young riders’ program. Who could find fault with such a life of utter respectability?

Admittedly, her campaign to present a squeaky-clean image would be easier if she didn’t also have hiring a detective on her to-do list. But discovering who was the TM her mother had gushed about in her diary was an absolute imperative. The need had sprung full blown inside Jade the second she’d accidentally stumbled upon her mother’s private journal in her half sister Jordan’s closet.

Like curious Pandora with her box, Jade had opened the gaudy pink diary and, recognizing her mother’s handwriting, started reading. Having entered Jordan’s closet simply to borrow a sleeveless ratcatcher for an upcoming horse show, she’d left it with her perception of her mother forever altered. Damningly so.

She’d not only learned that her mother had been having an affair with someone she called TM, she’d also learned in entry after entry the depths of her mother’s resentment and dislike for her only child. According to her mother, Jade was endlessly spoiled and obnoxious, a drain that sucked all the energy out of her.

If Jade was the black hole in her life, this TM was her sun, the frigging life-affirming center of her universe.

It must have utterly destroyed Dad to read those words. And he had read them. Her sister Margot had been the one to stumble upon the diary first, finding it in a drawer in their father’s office desk. Jade knew her dad well enough to realize that he’d have read the journal as obsessively as she, feeling more and more betrayed with each reading.

Jade despised whoever this TM was for getting involved with her mother. And since she now had access to the money her mother had left her, she saw no reason why she shouldn’t use it to hire a private investigator. Dad would approve, even if Margot and Jordan didn’t.

So the trick would be to make sure they never found out.

Thank God
, she thought, as the traffic ahead began to move. She was actually going to get to shift into first gear and leave these dark thoughts behind.

Jade found a hotel outside Norfolk. The place was ablaze with lights. No Bates Motel–tike features about it. It occurred to her as she drove in to the crammed parking lot that it might be a bit
too
busy, and as she grabbed her duffel bag from the Porsche’s trunk, she hoped there was a free room.

The rain was still coming down in lashing sheets. In the few minutes it took to shoulder her bag, double-check that her car was locked, and sprint across the parking lot, she was soaked. Stepping into the lobby, she blinked, disoriented by the bright lights and colors after staring into silvery blackness for so long.

Escape from Saigon by Andrea Warren
Player: Stone Cold MC by Carmen Faye
The Lion, the Lamb, the Hunted: A Psychological Thriller by Andrew E. Kaufman
Hell on Heels by Anne Jolin
The Sons of Heaven by Kage Baker
Georgie of the Jungle by Bailey, J.A.
The Shadow and the Star by Laura Kinsale
The Road To Sevendor - A Spellmonger Anthology by Terry Mancour
The Modigliani Scandal by Ken Follett
Runaway Groom by Virginia Nelson
Our partner