Read Catch Her If You Can Online

Catch Her If You Can

BOOK: Catch Her If You Can
>>DOWNLOAD HERE >>READ ONLINE NOW
ads 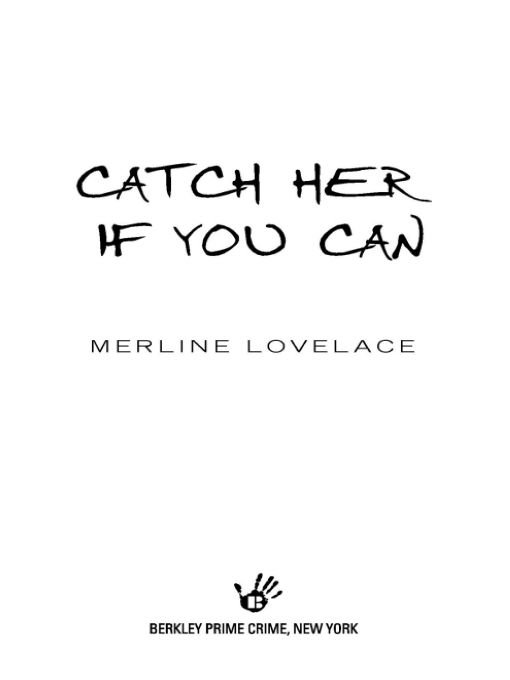 Table of Contents
Title Page
Copyright Page
Dedication
CHAPTER ONE
CHAPTER TWO
CHAPTER THREE
CHAPTER FOUR
CHAPTER FIVE
CHAPTER SIX
CHAPTER SEVEN
CHAPTER EIGHT
CHAPTER NINE
CHAPTER TEN
CHAPTER ELEVEN
CHAPTER TWELVE
CHAPTER THIRTEEN
CHAPTER FOURTEEN
CHAPTER FIFTEEN
CHAPTER SIXTEEN
PRAISE FOR
ALL THE WRONG MOVES
“A 21-gun salute for
All the Wrong Moves
, a fast-paced, original, authentic military mystery that builds to a pulse-pounding finale.”
—Carolyn Hart, Pulitzer Prize-nominated author
of the bestselling Death on Demand series
“
All the Wrong Moves
has all the right stuff . . . Fast-paced adventure starring an irreverent heroine you’ll never forget. I couldn’t put it down!”
—Vicki Lewis Thompson,
New York Times
bestselling author
“Samantha is great—sassy and indomitable and believable . . . [The] action never stops.”
—Joanna Carl,
author of the bestselling Chocoholic Mysteries
“Well paced, this chatty first-person narrative develops the character of the not-so-military-type heroine who doesn’t deal well with authority figures but does the best she can because she knows her job’s important. Crime fans will look forward to Lt. Spade’s next adventure.”
—
Publishers Weekly
“What fun! Merline Lovelace delivers a wisecracking heroine with a fascinating and interesting occupation that teams her with a cast of eccentric and peculiar characters. If you are looking for a good laugh with a strong mystery,
All the Wrong Moves
is the perfect choice.”
—
Fresh Fiction
“Merline Lovelace’s new novel,
All the Wrong Moves
, is a great start to a new mystery series. I enjoyed her fast-paced first-person narrative, and I like United States Air Force Lieutenant Samantha Spade a lot.”
—
INDenverTimes
RAVES FOR
MERLINE LOVELACE
“Strong and clever characters populate the Lovelace world in stories that sizzle with a passion for life and love.”
—Nora Roberts/J. D. Robb,
New York Times
bestselling author
“Merline Lovelace’s stories are filled with unforgettable characters . . . Each new book is an enjoyable adventure.”
—Debbie Macomber,
New York Times
bestselling author
“Merline Lovelace rocks! Like Nora Roberts, she delivers top-rate suspense with great characters, rich atmosphere, and a crackling plot!”
—Mary Jo Putney,
New York Times
bestselling author
“If you’ve never read Merline Lovelace before, you’re in for a treat. She’s one of the best. Heart-stopping action and high-stakes intrigue spiked with sexy, pulse-pounding romance—a reader couldn’t ask for more.”
—Carla Neggers,
New York Times
bestselling author
“Lovelace’s many fans have come to expect her signature strong, brave, resourceful heroines, and she doesn’t disappoint.”
—Booklist
“Compulsively readable.”
—Publishers Weekly
Berkley Prime Crime titles by Merline Lovelace
ALL THE WRONG MOVES
NOW YOU SEE HER
CATCH HER IF YOU CAN 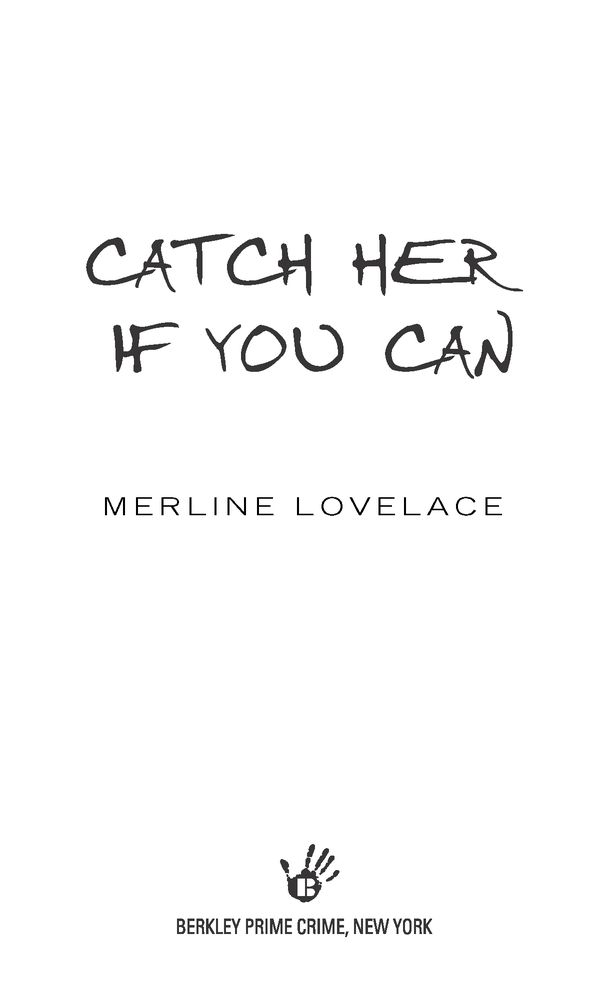 To my own handsome hero, Al.
Thanks for all the grand adventures!
CHAPTER ONE
I was at Pancho’s bar/cafe/motel/convenience store when I lifted the lid on a dented beer cooler and discovered three severed heads. Or more precisely, I was in the dirt parking lot outside Pancho’s bar/cafe/etc., trying without success to get Snoopy SNFIR to heel. Or sit. Or just
puh-leese
stop crawling all over everything!
I admit I was pretty exasperated at that point. Sergeant Cassidy and I had chased the little robot across the desert for close to five hours that May afternoon. I was hot and sweaty and really, really looking forward to a cool one before beginning the return trip to our remote test site.
Before going into the gory details of what happened next, I guess I should introduce myself. I’m Samantha. Samantha JoEllen Spade, former cocktail waitress at the Paris casino in Las Vegas. Through a convoluted set of circumstances involving my jerk of an ex-husband and our over-endowed tramp of a neighbor, I traded the bright lights and big tippers of Sin City for a commission as a second lieutenant in the United States Air Force.
I’m sure there have been more troublesome second lieutenants in the long and storied history of the military. You wouldn’t think so, though, if you’d heard my boss at the Air Force Research Lab when he announced that he’d arranged a “career broadening” assignment for me to the Defense Advanced Research Projects Agency. That’s DARPA in military lingo. For reasons I’ve yet to comprehend during my twenty-two months in uniform, the military never uses whole words if they can possibly avoid them. I’ve learned to string whole sentences together using only initials. Lest you think I’m exaggerating, check out the DOD DMAT, aka the Department of Defense Dictionary of Military and Associated Terms. It’s available online in PDF format and runs to a mere 780 pages!
But I digress. As mentioned above, I was “loaned” to DARPA as a brand-new second looey. The agency’s mission is to develop far-out technologies that could improve the war-fighting capabilities of our military services. It does that through program managers who loll around in nice, air-conditioned offices in Arlington, Virginia, and shovel out big bucks to universities and high-powered research centers across the country.
Wish to heck I was one of those fat-cat program managers. No such luck. My reputation must have preceded me, as I was treated to a brief orientation at DARPA headquarters before being shipped out to El Paso, Texas, as OIC of FST-3. (See what I mean about initializing! It’s a disgusting habit but as infectious as pinkeye.) What I
meant
to say is that I was designated officer in charge of Future Systems Test Cadre—Three.
FST-3’s mission—and that of its two sister cadres—is to evaluate projects that don’t meet headquarters’ threshold for direct oversight. Translation: we play with inventions submitted by mom-and-pop enterprises, retired high school chemistry teachers, and pimply adolescents who like to tinker with devices that weren’t designed to be tinkered with.
FST-1 is based in Alaska and tests items with potential for cold weather application. FST-2 does its thing in the Florida Everglades. Our venue is desert terrain. Hence the hot, bumpy chase Sergeant Cassidy and I had just made through twenty-plus miles of cactus-infested terrain.
A few words about Staff Sergeant Noel Cassidy. He’s six-three, steely-eyed, and keeps his hair buzzed so near to his scalp that he looks bald. A Special Ops type with several combat tours and a bunch of years of service under his belt, Noel got shuffled off to FST-3 after an unfortunate misunderstanding with an undercover vice cop.
The experience did a real number on his muscle-bound psyche. The poor guy has yet to recover from the shock of learning that he got turned on by a cop in drag. Just between you and me, though, it’s taking Noel a loooong time to sort through his issues. But when I mentioned as much to his military shrink, she merely smoothed her honey-colored bob and treated me to a bland smile. Since then I’ve tried
very
hard not to think about Sergeant Cassidy’s extended sessions on her couch.
The third player in this little drama with its head still attached is a robot. He was created from spare parts and Radio Shack circuitry by Allen H. Farnsworth, an Iowa potato farmer and self-proclaimed renewable-energy nut. Farmer Farnsworth labeled his creation Self-Nurturing Find and Identify Robot—SNFIR for short. According to Farnsworth’s passionate letter requesting FST-3’s evaluation, his little thingamajig could sniff out, extract, and chow down on naturally occurring biodegradable energy sources like twigs and grass and garbage, thus providing itself a limitless fuel supply.
The concept caught my team’s interest. We’re suckers for gizmos and gadgets with even the slightest potential for military application. This one definitely had that. If it worked, SNFIR could travel indefinitely to scope out enemy territory. Or scoot ahead of Humvees to sniff out IEDs. Or provide a platform to ferry munitions to pinned-down troops. Or transport wounded back behind the lines.
Pretty grandiose hopes for an invention that, when it arrived at our test site, my team instantly dubbed Snoopy. As in Snoopy Sniffer. Remember him? The toy dog with droopy ears you pulled around on a string?
Not that I ever played with one. Girly girl that I am, I preferred Barbie dolls to clacking hounds. But I remember one of my brothers smacking a cousin in the mouth with the wooden toy and knocking out two teeth. The same brother, by the way, who’s now on his fourth wife and trying to make it as an Ultimate Extreme Wrestler. What does that tell you about the collection of losers and boozers who comprise my family?
ADS
15.4Mb size Format: txt, pdf, ePub

The Kid: What Happened After My Boyfriend and I Decided to Go Get Pregnant by Savage, Dan
Soul Full of Guns: Dave vs the Monsters by John Birmingham
Fix You: Bash and Olivia, Book 3 by Christine Bell
Stripped Bear by Kate Baxter
Shades of Murder by Ann Granger
A Recipe for Robbery by Marybeth Kelsey
Checkmate 2: Let the Games Begin by Tiece
The People's Act of Love by James Meek
Unbroken (The Disclosure Series Book 2) by Hunter, R.E.
Compendium by Alia Luria
Our partner