Read Caught in the Web Online

Caught in the Web 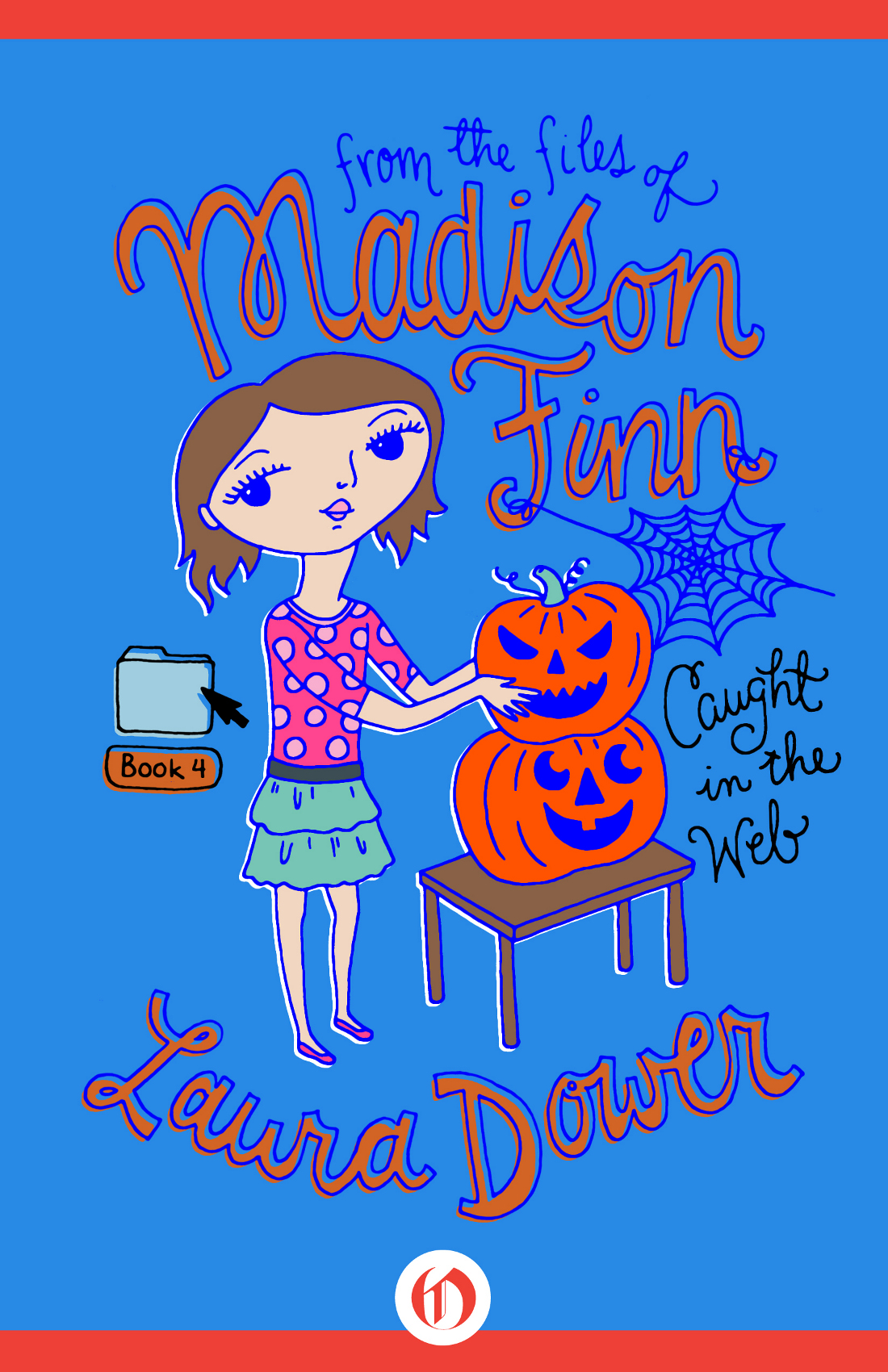 Caught in the Web
From the Files of Madison Finn, Book 4
Laura Dower

For Rich and the monkeys

Preview:
Thanks for Nothing

“S
O EVEN THOUGH THIS
guy was dead, his heart was still beating under the floor?” Hart Jones cried. “For real?”

Madison Finn shifted in her chair. English class was giving her the creeps today.

Mr. Gibbons continued to pace in front of the class as he explained more meaning behind “The Tell-Tale Heart.” He replayed a recording of the classic short story by Edgar Allan Poe.

…
The beating grew louder, louder! I thought the heart must burst. …

This narrator’s voice was weirder than weird.

…
Until, at length, I found that noise was
not
within my ears …

“So his mind was playing tricks on him,” Hart said aloud.

Mr. Gibbons clapped, excited. He liked it when his students gave good answers.

Hart always said things in class that made teachers smile. He was smarter than smart. This was probably why Madison had been crushing on him since seventh grade started. Plus, he was cute.

Way back in elementary school Hart had chased her around the school yard, but Madison always ignored him. Back then, Hart had been nothing more than a big geek. But something had changed over the years. His family moved away from their neighborhood in Far Hills. They moved back again when Hart was suddenly popular. Even Madison’s enemy, Ivy Daly, appeared to have both eyes on him.

Fiona Waters leaned over to Madison. The beads on her braids clinked against the desk.

“Was Hart Jones just looking over
here!”
Fiona asked. “I swear I saw him. I swear.”

“No way,” Madison said firmly, turning in her chair. She shrugged off Fiona with a casual “Whatever.” For a friend who was usually pretty spaced out, Fiona was paying an awful lot of attention to people Madison “liked” and “didn’t like.”

Hart had absolutely not glanced over in Madison’s direction.

Had he?
Now Madison wasn’t sure.

Madison’s lips were Ziploc-sealed shut when it came to boys. Only her secret computer files and her secret online friend Bigwheels knew the whole truth about her feelings for Hart and everything else.

Across the classroom, Ivy’s hand shot into the air. She looked like a boa constrictor ready to strike. She had her elbows up on her desk and her red hair was all fluffed out around her head.

“Mr. Gibbons?” Poison Ivy hissed. “Can’t you just tell us why the man killed the other man again?”

A kid from the back row laughed out loud. “Duh, weren’t you listening?”

“Duh, yourself.” Ivy turned around and glared. “I was so listening!”

“Excuse me.” Mr. Gibbons clapped again because he wanted everyone to be quiet. He handed a spiky-haired girl in the front row a stack of papers. “I think we’ve talked about ‘The Tell-Tale Heart’ for long enough, class. Now, take one of these sheets and pass the rest along. …”

Madison saw the word
Boo!
in giant black letters on the page. A cluster of black bats winged across the top. Underneath, Mr. Gibbons had printed random facts about the origins of the upcoming holiday.

Much to Madison’s surprise, the Halloween described on this paper had very little to do with the holiday she’d understood all her life. Centuries ago in Europe, Halloween was named “Samhain.” Mr. Gibbons pronounced it “son-wen.” Samhain started out as a Celtic holiday.

“Wait! Wait! Who are the Celtics again?” Ivy asked aloud.

“Just one of the best basketball teams
ever,”
Fiona’s brother, Chet Waters, snapped.

Mr. Gibbons laughed. “You’re right, Chet. But the real Celtics, or Celts, mentioned here were people from ancient Ireland. At the time we’re talking about, in the fifth century B.C., Samhain, or Halloween, was the day their summer ended. On your sheet there’s more information—and I added a crossword on the other side. …”

Madison loved word games. She flipped the page over instantly. This crossword was shaped like a witch’s hat.

“Pssst! Maddie?” Fiona asked, leaning over toward Madison’s desk. “Can you sleep over on Saturday? I’m going to ask Aimee too. My mom said it was okay.”

Madison timed herself filling in all the crossword puzzle blanks. Three minutes later, she’d scribbled the answer to each clue, finishing up just before the class bell. It was a personal record.

Fiona grabbed Madison’s arm as they walked out.

“My mother says she’ll make minipizzas and Cherry Garcia sundaes in honor of your favorite ice cream flavor,” Fiona bubbled. “At the sleepover I mean. And my dorky brother, Chet, won’t be there, so we can get any old movie we want on demand. I am soooo excited!”

Madison stopped short in front of a display case as they walked down the hall together. “Look,” she said, motioning to Fiona. She pointed to a bright orange sign inside the cabinet:

Something to Scream About!

“Yeah! Aren’t you excited?” Fiona asked when she read the sign. “Seventh-grade dance committee meeting’s tomorrow. We have to do the decorating and food and stuff like that.”

Madison acted happy, but deep down, the dance had her a little worried. School dances usually meant a girl needed to be able to do three things: get boys to like her, pick out a cooler-than-cool outfit, and dance. Madison wasn’t sure she could do
any
of those things.

She considered the possibility that maybe her luck was changing, however. Seventh grade was a new start, Madison told herself, so maybe all the tricks of the past would now turn into
treats
?

Madison headed over to Mrs. Wing’s classroom to help upload some documents onto the school Web site. She’d been helping with the site since school started, usually after school and during free periods.

Staying after school could be a very good thing. Especially today. Madison knew Mom would be home late because of a meeting. Aimee had dance troupe. Fiona had soccer. If she stayed after school, Madison could avoid being alone so much. She’d get to walk home with her friends, after all.

On the way home, Aimee started chattering about the Halloween dance, but Fiona wanted to talk about sleepover plans exclusively. Madison asked Aimee if she could bring her mother’s Ouija board.

“You know, Fiona,” Madison said. “You sit around in the dark and move this little pointer on the game and ask the ghosts to come and play. Like ooooooh, I’m so scared!”

“There
are
ghosts everywhere,” Aimee said with a straight face, pointing to an old building they passed on the route home. “Everywhere. You saw
Poltergeist.”

“That movie was freaky! And there are
no
ghosts in Far Hills.” Fiona shuddered. “Not like that anyway. Would you quit saying spooky stuff?”

“Yeah, Aim. I’ve had the jeebies all day,” Madison said, thinking back to the story from English class.

“See? That’s because you do believe me!” Aimee smirked.

As the sunlight faded, all the houses seemed soaked in an eerie, orange glow. While clouds and night sky gathered overhead, light played tricks on the sidewalk.

“You never know when there are ghosts around. They could be at school or anywhere. That’s all I’m saying,” Aimee said, hustling ahead of her friends.

Madison and Fiona looked at each other and then rushed to catch up. All Aimee’s ghost talk
had
changed their minds a little. Suddenly every bush along the side of a dreary road was hiding a monster, every shadow on a deserted street was a beast on the loose, and every noise was the sound of heavy, plodding footsteps. …

Madison was so relieved to finally reach her front porch. She pulled her house key out of her bag. Phineas T. Finn, Madison’s pug, greeted her with a big, wet, doggie smooch when she walked in the door. She couldn’t hear anything at first except the dog’s heavy breathing and snorting in her ears.

…
Until, at length, I found that noise was
not
within my ears. …

Her mind wandered back to “The Tell-Tale Heart” again. Ghost stories at school and on the way home were definitely
not
a good idea. Especially when she was home alone.

Madison called Mom’s cell phone to check in. After getting the automatic voice mail system and not a real live Mom, she left a long message. Nerves made her ramble on a little bit longer than usual.

As she entered her bedroom, Madison flicked on the light and knelt down to look under the bed. But the only things Madison saw were a sock covered in dust, a notepad with Phin’s chew marks, and one very dirty nickel.

Madison checked every closet and corner and crevice.

She even peeked behind the shower curtain in the hall bathroom.

What if there were ghosts in Far Hills?

Relieved when she found nothing resembling a ghost, Madison shook off her jeebies, slipped out of her sneakers, and sat down at her desk. She speed-dialed her mom once again and got a busy signal this time. Mom was probably getting her messages. She’d be home soon, anyway.

Madison hadn’t checked her laptop computer for e-mails yet today, so she powered it up. It was still sitting open on her bedroom desk exactly where she’d left it plugged in that morning. One click and the motor hummed. As the home screen illuminated, Madison’s e-mailbox popped up.

Who was Bob1A1239? His name looked like a real name, like a person from school. It annoyed Madison to think that someone was e-mailing her while pretending to be a regular guy. He wasn’t real! She knew it must be an advertisement and immediately deleted the message. Dad always said to do that when she didn’t know the sender.

“That spam is the bane of my existence,” Dad always complained. “Don’t ever open up a link on any email you don’t know.”

And so Madison only opened the ones she knew.

Boop-Dee-Doop, an online clothes store for girls, was having a sale.

And Dad had sent along another one of his jokes. Madison always tried to guess the punch line.

What do you put on a Halloween sundae?

Whipped scream was the answer. She guessed it right away, but she still giggled. Dad’s e-mails were like happy shots. It didn’t even matter if she’d heard a joke before.

Madison opened a saved document and typed the sundae joke into her Dad file. It was joke number thirty-two so far this month. After that she went into her file marked “Social Studies.” She’d created folders for every single subject with ongoing vocabulary lists. Tonight she had to study terms about archaeology. Her teacher, Ms. Belden, said she might be popping a pop quiz tomorrow.