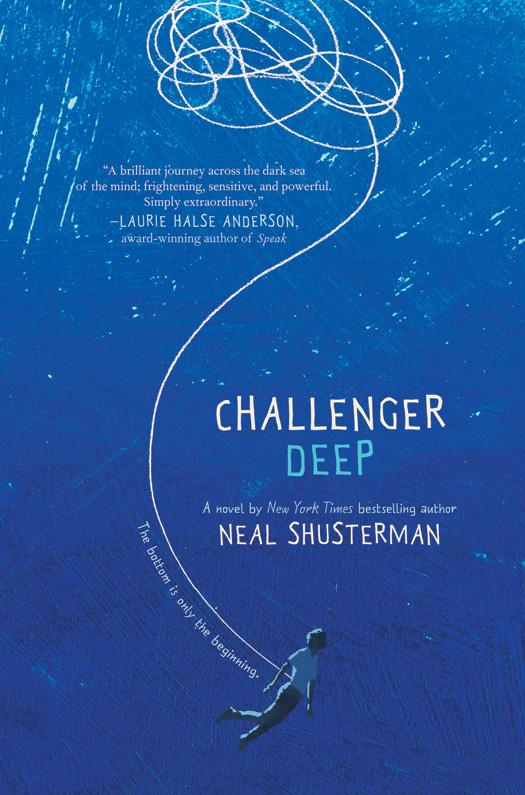 Challenger Deep
has been a labor of love, the creation of which spanned many years. First and foremost, I’d like to thank my son Brendan for his contributions; my son Jarrod for his amazing book trailers; and my daughters, Joelle and Erin, for their many insights and for being the wonderful human beings they are. My deepest gratitude to my editor, Rosemary Brosnan; associate editor, Jessica MacLeish; and everyone at HarperCollins for the amazing amount of support they have given this book. Thanks also to my assistants Barb Sobel and Jessica Widmer for keeping my life and speaking schedule on track. I’d like to thank to the Orange County Fictionaires for their support and critiques through the years; NAMI, the National Alliance on Mental Illness, for being such a great resource; and finally my friends for always being there through the best and worst of times.

Thank you all! My love for you is bottomless.

There are two things you know. One: You were there. Two: You couldn’t have been there.

Holding these two incompatible truths together takes skill at juggling. Of course juggling requires a third ball to keep the rhythm smooth. That third ball is time—which bounces much more wildly than any of us would like to believe.

The time is 5 a.m. You know this, because there’s a battery-powered clock on your bedroom wall that ticks so loudly you sometimes have to smother it with a pillow. And yet, while it’s five in the morning here, it’s also five in the evening somewhere in China—proving that incompatible truths make perfect sense when seen with global perspective. You’ve learned, however, that sending your thoughts to China is not always a good thing.

Your sister sleeps in the next room, and in the room beyond that, your parents. Your dad is snoring. Soon your mom will nudge him enough to make him roll over and the snoring will cease, maybe until dawn. All of this is normal, and there’s great comfort in that.

Across the street a neighbor’s sprinklers come on, hissing loud enough to drown out the ticking of the clock. You can smell the sprinkler mist through the open window—mildly chlorinated, heavily fluoridated. Isn’t it nice to know that the neighborhood
lawns will have healthy teeth?

The hiss of the sprinklers is not the sound of snakes.

And the painted dolphins on your sister’s wall cannot plot deadly schemes.

And a scarecrow’s eyes do not see.

Even so, there are nights where you can’t sleep, because these things you juggle take all of your concentration. You fear that one ball might drop, and then what? You don’t dare imagine beyond that moment. Because waiting in that moment is the Captain. He’s patient. And he waits. Always.

Even before there was a ship, there was the Captain.

This journey began with him, you suspect it will end with him, and everything between is the powdery meal of windmills that might be giants grinding bones to make their bread.

Tread lightly, or you’ll wake them.

“There’s no telling how far down it goes,” the captain says, the left side of his mustache twitching like the tail of a rat. “Fall into that unknowable abyss, and you’ll be counting the days before you reach bottom.”

“But the trench has been measured,” I dare to point out. “People have been down there before. I happen to know that it’s 6.8 miles deep.”

“Know?” he mocks. “How can a shivering, malnourished pup such as you know anything beyond the wetness of his own nose?” Then he laughs at his own assessment of me. The captain is full of weatherworn wrinkles from a lifetime at sea—although his dark, tangled beard hides many of them. When he laughs, the wrinkles stretch tight, and you can see the muscles and sinews of his neck. “Aye, it be true that those who have ventured the waters of the trench speak of having seen the bottom, but they lie. They lie like a rug, and get beat twice as often—but just so it scares the dust out of ’em.”

I’ve stopped trying to decipher the things the captain says, but they still weigh on me. As if maybe I’m missing something. Something important and deceptively obvious that I’ll only understand when it’s too late to matter.

“It’s forever down there,” the captain says. “Let no one tell you any different.”

I have this dream. I am lying on a table in an overlit kitchen where all the appliances are sparkling white. Not so much new as pretending to be new. Plastic with chrome accents, but mostly plastic.

I cannot move. Or I don’t want to move. Or I’m afraid to move. Each time I have the dream, it’s a little bit different. There are people around me, only they aren’t people, they’re monsters in
disguise. They have gone into my mind and have ripped images from it, turning the images into masks that look like people I love—but I know it’s just a lie.

They laugh and speak of things that mean nothing to me, and I am frozen there among all the false faces, at the very center of attention. They admire me, but only in the way you admire something you know will soon be gone.

“I think you took it out too soon,” says a monster wearing my mother’s face. “It hasn’t been in long enough.”

“Only one way to find out,” says the monster disguised as my father. I sense laughter all around—not from their mouths, because the mouths of their masks don’t move. The laughter is in their thoughts, which they project at me like poison-tipped darts shot from their cutout eyes.

“You’ll be better for this,” says one of the other monsters. Then their stomachs rumble as loud as a crumbling mountain as they reach toward me and tear their main course to bits with their claws.

I can’t remember when this journey began. It’s like I’ve always been here, except that I couldn’t have been, because there was a before, just last week or last month or last year. I’m pretty certain that I’m still fifteen, though. Even if I’ve been on board this wooden relic of a ship for years, I’m still fifteen. Time is different here. It doesn’t
move forward; it sort of moves sideways, like a crab.

Damek's Redemption: Legacy, Book 6 by N.J. Walters
Princess of Death (Three Provinces Book 1) by Renee Travis
Nowhere to Hide by Joan Hall Hovey
Cockroach by Rawi Hage
The Order of the Elements 01 - Breaking Point by Jess Bowen
Not Famous in Hollywood (Not in Hollywood Book 1) by Leonie Gant
The Map of Love by Ahdaf Soueif
The List by Kate L. Mary
Stanton Bliss: Stanton by T L Swan
Rocky Road by Rose Kent
Our partner