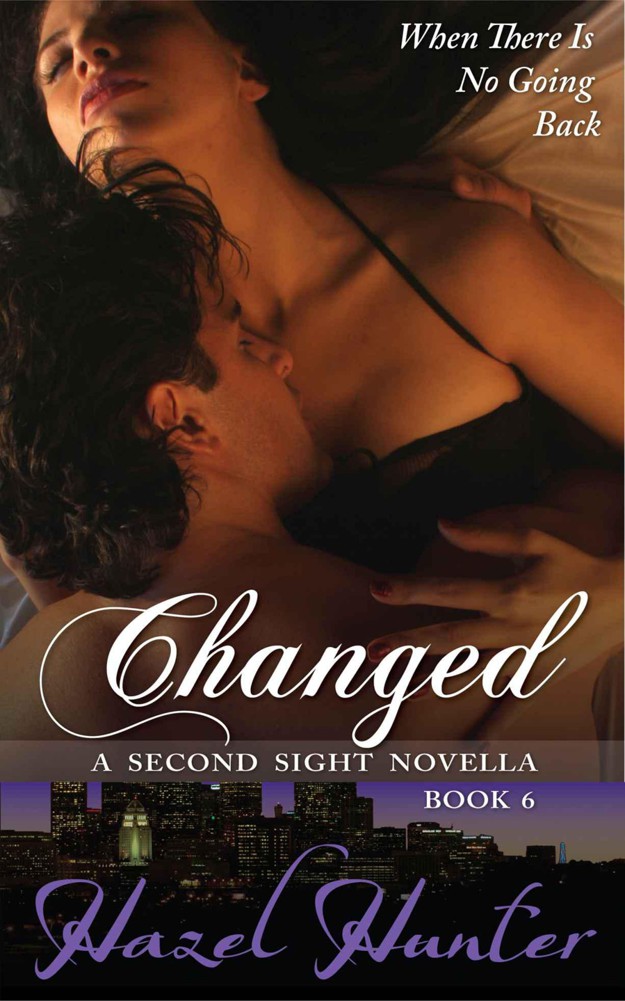 ISABELLE’S CELL PHONE buzzed on the nightstand. Though the bright light of morning had been streaming in for hours, she had no intention of getting up.

“Who is that on a Sunday morning?” Mac said, just behind her, his soft breath tickling her ear.

His warm chest pressed into her back and his hair-roughened thighs tucked up behind hers. One giant arm was looped around her waist and, as she lay curled on her side, she cuddled it to her chest.

“Go back to sleep,” she whispered.

But, in answer, he hugged her closer.

It almost felt normal. Two days in a row, they’d slept in. No FBI work for Mac. No readings for her. For the first time in their relationship, there was no hurry. Nothing hanging over them.

And it felt
wonderful
.

As Mac pulled her tighter to him, the hard muscles of his chest and abs flexed against her and his bicep bunched at her side. Isabelle closed her eyes and relaxed into his embrace, moving her hips back into the curve of his. If they never got out of bed, it’d be too soon.

The cell phone vibrated once, reminding her there was an unread message.

Before she knew what he was doing, Mac reached for it.

“
No
,” she said, her gloved hand landing on his forearm.

But it was too late. He’d already picked it up and turned it so they both could see it.

It was a text from Kayla.

“Just got home with Little Gavin,” it read. “Thanks again for everything you did!”

Mac set the phone down.

“That’s nice,” he said, curling up with her again.

Though Isabelle closed her eyes and felt his arm enclose her, her mind turned back to the message. Only two days ago, they’d rescued Kayla’s newborn son from his own father. Daniel was in custody now, arrested for kidnapping, but Isabelle knew there was more to his crime–much more. The problem, though, was that she’d seen his attempt to sell the little boy in a reading. Though her gift of seeing the past in people and objects had helped them to save the baby, it wasn’t proof of what Daniel had done. And, as Mac had reminded her, it wasn’t admissible in court.

Mac felt Isabelle squirm as she ducked her head and giggled.

He grinned and hugged her tighter. She was
adorable
–especially when she was relaxed.

They were both relaxed for a change. He’d almost forgotten what that was like but yesterday had been fun. She’d insisted they do something touristy and, though he’d been reluctant, the day had been great. They’d gotten up late and gone to Olvera Street. They’d strolled through the little shops and vendor carts that occupied the original and quaintly Mexican heart of Los Angeles. Lunch had been good–the oldest Mexican restaurant in the entire city–but the best part had been just feeling her at his side, her arm around his waist, his arm around her shoulders. They’d window-shopped only, no actual buying. For Isabelle to bring something new into the apartment, it needed to be free of readings, or as close to that as possible. The fewer people had touched something, the better. Oddly enough, while the rest of the world might be fond of something handmade, Isabelle preferred possessions stamped out by a machine. She depended on it. Even now, he could feel the soft fabric of her gloves on his arm.

Mac frowned a little at the sensation.

Isabelle had worn the gloves a lot in the last couple days, even when they were in bed. It was something he thought they’d gotten past.

Isabelle had gone still again. She was thinking about something.

“What is it?” he said quietly, careful to avoid her ear.

“Nothing,” she said quickly.

He had to smirk.

Yes, Daniel
, Mac thought, system administrator for the Green Earth Commune, where he’d tried to sell his new son.
What a guy.

“What about him?” Mac asked.

The reading still bothers her.

When they’d rescued Little Gavin and taken Daniel into custody, Isabelle had been livid. She’d read him without permission, something Mac had never seen her do. But the reading had only lasted seconds. Daniel had pushed her away, knowing full well what she was capable of. Mac almost shook his head but stopped himself.

How had Isabelle ever been in a relationship with someone like that?

Mac couldn’t see it but now a different question occurred to him.

“If you’d had infinite time for the reading, how much could you have seen?” Isabelle tried to turn to him but he wouldn’t budge, not ready to give up holding her like this quite yet. “Just answer the question, ma’am,” he said, using his best, official Special Agent voice. “Or I’ll be forced to…” He put his mouth near her ear. “…whisper in your ear.”

That made her giggle again and he smiled.

“Theoretically?” she asked, hugging his arm.

“Okay,” she said. “Well not ‘no’ but the problem is that I can’t read anything or anyone for very long anyway.” Mac had seen that from the start–how it drained her. “And, I generally read the most recent past or thoughts.” She paused for a while. So long, in fact, that Mac raised his head to look down at her. “Multiple readings helps,” she said quietly.

They’d been over this. There couldn’t be another reading with Daniel. He was in custody.

“But why Botox?” she asked. Mac settled his head back down on his arm. “It’s important, Mac. I
know
it is.”

Her body was tense again.

“It’s important to Geoffrey,” he said. “That much is true.”

Though Mac had been half-joking, speaking the man’s name immediately made his blood boil. The overly coiffed and tanned front man for the commune had dared to kiss Isabelle.

“That wasn’t it,” Isabelle said, apparently not appreciating the joke. “It had to do with Maurice.”

Mac forced the image of Geoffrey out of his mind.

Don’t go down that path.

“For all we know,” Mac said, “both the brothers use it. What’s a little paralysis compared to being wrinkle free?”

“And it has to do with computer files,” Isabelle continued, as though she hadn’t heard him. “But I didn’t see which ones.”

With every passing minute, she was growing more stiff.

“Why are you wearing your gloves?” Mac asked abruptly.

When he didn’t reply, she started to turn to him but he laid his head alongside hers, stopping her.

They’d been over this too. All FBI Special Agents got a top secret clearance as a matter of qualifying for the job. Though he hadn’t needed access to classified information for some time, if it ever became necessary again, Isabelle reading him would be a problem.

But she couldn’t wear the gloves forever.

Nor would he want her to.

But they would cross that bridge when they came to it–the way they had all the others.

“No more work talk,” she echoed.

Though the talk might be over, Isabelle couldn’t stop thinking about what Mac had said.

But of course he had. When did Mac not notice everything?

“Yesterday was nice,” he said, nuzzling behind her ear. His warm breath washed down her neck, his lips buzzed slightly against her skin, and she had to close her eyes to the entirely sensual but also unnerving sensation. It was her weak spot and, along with everything else, Mac had obviously noticed that too.“But maybe,” he continued, “we’ll stay in today.”

Though she knew what he was doing, she couldn’t make herself stop him. She tried to hold on to the images from Daniel’s reading. She tried to concentrate on what they could possibly mean. But instead, all she could focus on was the way the tingling on her skin was both soothing and exciting, all at the same time.

It felt like she was melting–into the sheets, into his embrace, which now tightened on her.

MAC NIBBLED THE tender skin just behind Isabelle’s ear. A breathy sigh whispered from her lungs as her neck went slack.

Slowly, he began to slide his hand down her chest. Though she’d clung to his arm at first, he felt her grip eventually give way. He pressed his palm into the smooth skin of her flat abdomen. It slid by, satiny under his touch. He spread his fingers wide across the creamy flesh between her hips. Her pelvis responded with a small but seductive wriggle. Though he hardly needed to be urged on, that was exactly the effect of the sensual, little gyration as his arousal hardened between them. He swept his hand downward, skimming past the soft curls of her mound, and rubbing down the inside of her thigh.

As he slowly reversed direction and rubbed upward, her legs parted. He moved one finger along the center of her, probing gently. He slid into the moist cleft, moving steadily higher, until he nudged gingerly into the exposed pearl at the top.

Isabelle gasped and her back gradually arched against his chest.

Mac smiled against her neck, kissed it, and then sucked her earlobe into his mouth. As he fondled it between his lips, his finger drew a tight circle around the soft bead of flesh at her entrance.

A shudder rippled through Isabelle’s body and a shaky moan escaped her lips. Her hips pulsed forward and then backward, landing directly on his arousal. Her soft flesh pressed along its hard length, his member already anticipating their bodies becoming one. He massaged the delicate softness between her legs, circling clockwise and then reversing, pressing harder and then just barely touching it.

Isabelle whimpered in a gasping breath as her mound tried to follow his hand.

The needy little sound was electrifying. His bulging shaft jerked against her as his fingers cupped her entire mound. With a light tug, he pressed his fingers inward and was rewarded as Isabelle pressed herself into his palm.

But just as he was about to pull her hips back onto him, feel her luxuriant flesh caress him again, her gloved hand found his swollen shaft and quickly closed around it.

Warmth flooded between her legs, behind her mound, and up into her abdomen as Isabelle’s hand closed around Mac’s arousal. His quick intake of air swept past her ear as his lips lost their grip on the lobe. Before his fingers could caress
her
again, Isabelle stroked him.

Against her back, Mac’s massive chest went rigid. Slowly, she slid her fist all the way down to his groin and then, just as slowly, slid it back up. A deep, thrumming moan vibrated from him and she slid her hand back down and then up, more quickly this time. Mac’s fingers spread her entrance a little wider and pushed down harder on her sweet spot. A pang of pleasure erupted, lancing upward into her core, and her hips jerked spasmodically in response. Her hand stroked him harder this time and faster, and his hips pulsed forward, his erection surging quickly through her fist and then back out. Her hips gyrated with his movement as though he were already in her. Tension quickly coiled in her abdomen as the need for him to take her suddenly overwhelmed her.

“Mac,” she muttered hoarsely as her hips flew backwards into his.

“Isabelle,” he whispered against her neck as she guided him to her entrance.

No sooner had she let him go than he thrust into her.