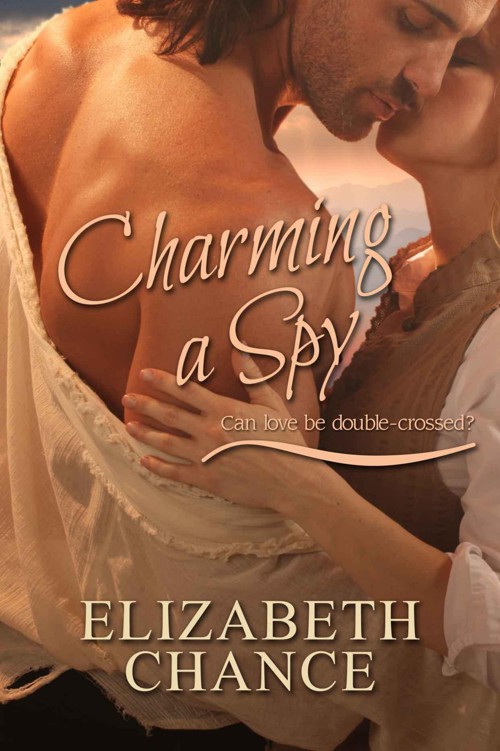 A novel by Elizabeth Chance

“B
ollocks,” Kat cursed
under her breath as she slid a hairpin into the lock. Burgling was not what a well-bred young lady should be doing. Then again, neither was cursing. Regardless, here she was breaking into the tall brick building on Cavendish Street
and
cursing at the same time. Double bollocks.

Kat jiggled the lock up and down a couple of times. On the third attempt, it actually opened. Surprisingly, the hairpin-in-the-lock trick worked like a charm. Now she could tell Aunt Ellie she was wrong; reading detective novels was more useful than “giving a cheese sandwich to a drowning ferret.” Then again, Kat couldn’t brag about being right without explaining how she had used her novel-acquired knowledge to pick a military office lock.

Pushing the door open tentatively, she peered around the corner. At half-past eleven, the only inhabitant of the office was darkness. She pulled out the candle tucked into the folds of her thick muslin skirt, cupped her hand around it and carefully lit the wick, using her body as a shield in front of the windows. Blinking a few times, Kat waited for her eyes to adjust to the dark. Unfortunately, the tiny flame did little to illuminate the cavernous offices, which made it especially hard to look for a clue… not that she knew exactly what she was looking for.

Think
. Where would top-secret military information be hidden? Her eyes darted around the room searching for concealed safes or trap doors. None were visible. Then again, if safes were visible, they wouldn’t be very well hidden safes, would they?

At a loss for where to start, Kat began thumbing through the stacks of paper on the nearest desk. Numbers, numbers, numbers. A thought occurred to her that perhaps all military secrets were written in number code. If that were the case, she was in serious trouble as she had paid absolutely no attention to her mathematics lessons.

The large table in the middle of the room attracted her attention. Enormous maps were strewn around with circles and arrows pointing every which way. Kat stared at them for several minutes, hoping some pattern would emerge. When no large and definitive X presented itself, she decided to keep looking.

She spied a door in the corner that appeared as if it might lead somewhere important. Her toe caught the edge of a frayed carpet, sending her crashing onto the hard wooden floor. It was not a demure landing. Rather, her fall might have been reasonably compared to a thousand elephants colliding.

Kat lay sprawled out on the floor, her legs in a jumble, paralyzed with fear. She sucked her belly into her spine waiting for a brigade of police to charge into the room and arrest her.
One, two, three, four…
no police. No sound at all.

Carefully climbing to her knees, she searched the floor for the candle which had been blown out and knocked to the ground. She crawled around on her knees, using her hands as eyes in the darkness. Finally, she found the waxy cylinder hiding against a chair leg. She stuck her hand into her pocket, fishing for a second match.

“Might I be of assistance?” a man’s voice asked as a phosphorous flame sprung from between his fingers. He leaned over and lit the candle she was holding.

Kat froze. She’d been discovered. Her heart pounded in her chest, trying to escape its fragile cage. Several frantic beats and a shaky breath later, she coaxed her muscles into moving enough to look up.

The flickering flame now lit the most arresting face she’d ever seen. His jaw and cheekbones appeared to be chiseled from a diamond, angles casting shadows vertically across his face. Dark eyebrows arched over intense eyes, which appeared as if they might turn anything meeting their stare into ash. In fact, being the subject of his gaze was causing Kat to grow warm. Still, she couldn’t look away and his eyes didn’t waver. His stare continued into the silence. Finally, he grabbed her by the arm and hauled her off the floor.

Even standing, the man loomed above her. Kat’s head barely came up to his chest. He had shoulders as broad as the English Channel and legs the size of tree trunks. Perhaps a slight exaggeration, but any person would surely be intimidated meeting him in a dark alley, or a dark office, as was currently the case.

“Unhand me,” she shouted, attempting to wriggle out of his grasp. Her efforts were fruitless and if anything, his grip tightened.

“I’m not ready to do that,” he said. His deep baritone voice was calm, but it made her feel the opposite. Who was this man? Perhaps he was also a robber. What were the odds of that? Someone else who just happened to be burglarizing the same office at the same time? Unlikely. Or perhaps he was a military officer working late, in which case she was well and truly caught. In fact, he was probably only moments away from calling the police. Strangely, her instincts told her he wasn’t going to call any authorities. Was it possible he expected to find her there?

“Who are you?” she demanded.

A silent pause filled the room while his stare captivated her. Instead of the expected reply,
I could ask you the same
, he countered with, “What are you looking for?”

“I don’t know,” she answered honestly. She shouldn’t be saying anything at all.

“That’s unfortunate,” he answered with continued calm. “It’s much harder to find something when you don’t know what you’re looking for.” His hand still circled her upper arm, his touch sent nervous flames shooting down her skin. “Perhaps you might tell me, instead, why you thought you might find this mystery item here?”

“I see,” he answered. “So am I to understand that you’re sneaking around in the middle of the night looking for
you don’t know what and you don’t know where
? That seems safe for a young, unarmed woman,” he quipped.

“I have a weapon,” she said, not knowing why she felt the need to justify herself to him He quirked one of his eyebrows in a way that communicated he didn’t believe her bluff, but in case, he pushed her away a bit to look her up and down for a concealed pistol or knife. His eyes slowly slid over her thin muslin skirt, leaving a trail of shivers across her body in their wake. The warm feeling spread past her belly, collecting below. She’d never been examined in such a way before and suspected it wasn’t proper to enjoy it as much as she was.

“You are correct. Only your weapon is not of the conventional sort,” he said, unlocking his fist from her arm and moving it to her waist.

“How dare you,” Kat said, in her best indignant voice. Half-heartedly struggling against his chest, she wanted to escape and at the same time hoped that he’d maintain his hold.
Traitorous flesh.

“Keep wiggling like that and you’ll soon learn what I dare.” She gazed at his chiseled smile, his meaning dawning on her. She stopped struggling immediately.

“Much better,” he praised, leaning down. Without notice, his mouth dropped to hers and he consumed her in a passionate kiss. His lips were softer than she would have guessed coming from this hard, intimidating man. Not that she had expected a kiss. The sweet, light touches of his mouth were at odds with the way he’d roughly held her captive in the moments before. The contradiction confused her… so at odds with his giant build… and also at odds with their circumstances.

Kat was lost in the gentle touch of his mouth, the teasing of his tongue brushing softly against the inside of her upper lip. The taste was peppermint and honey. She forgot where she was, why she was there and everything except the warmth of this moment. His touch was irresistible with one hand cradled on the side of her cheek, the other holding her waist against his hips, firm and gentle at the same time.

She couldn’t resist his tender assault… and wanted more. He understood her silent wish, spoken only by the shift of her hips, pulling her deeper into him. In surrender, she reached up to wrap her hands around the nape of his neck.

Racket from the street below startled Kat back to her senses. A carriage had stopped in front of the building and people were climbing out. In a heady rush, she remembered that the man kissing her was her captor and she was a thief. His kiss had momentarily stolen her awareness, but the noises startled him into releasing his grip on her body and her sanity. Now she was alert and all too aware of how much trouble she was in.

Kat turned and ran as fast as she could. She made it to the front office door, pulled it open, practically spilled down the front steps, then threw open the outer door and sprinted to the unmarked hack. “Go!” she yelled to the driver. Immediately the carriage started, horses clopping as the wheels rolled down the street. Kat pulled the curtain aside and peered out the back window.

“K
atherine, are you
feeling quite all right?”

“Of course, Aunt Ellie,” Kat said covering her yawn with the back of her hand. “Why do you ask?” She tried to look cheerful and unassuming, which was a chore even on a good day. Today it was torture.

“It’s past ten o’clock. You never take your breakfast this late.”

“I was up again last night reading sonnets,” Kat lied.

“You must think me quite naïve indeed,” Aunt Ellie scoffed. For a second Kat worried maybe her Aunt had caught her coming home from her late night attempted robbery. Then she frowned and continued, “Sonnets. Probably more of those wretched espionage books. You must stop filling your head with nonsense. As useless as a chocolate teapot, I tell you.”