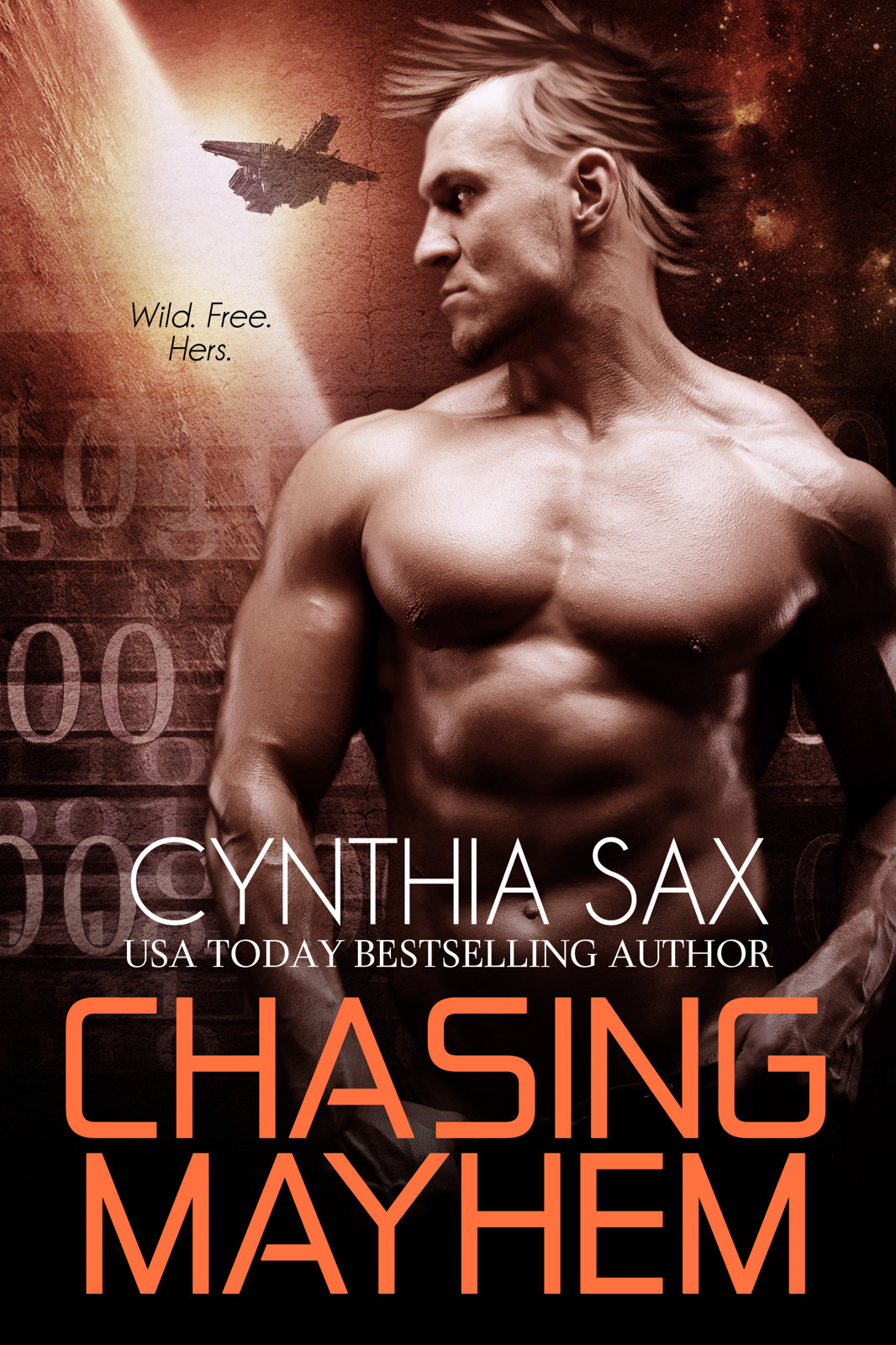 Mayhem has spent his lengthy lifespan obeying the Humanoid Alliance’s rules. Finally free from their cruel control, the cyborg warrior plans to cause chaos. He infiltrates a remote settlement, provokes the savage locals until they want him dead, and allows himself to be captured by the sexiest little Retriever he has ever laid his mechanically-enhanced eyes on.

Imee’s sole mission in life is to keep her family alive. To do this, she must hunt rebels, returning them to the Humanoid Alliance's evil clutches where they will be executed. She doesn’t allow herself to feel anything for her targets…until she meets a tall, muscular cyborg with wild hair and even wilder eyes.

Published by Cynthia Sax at Smashwords

Discover more books by Cynthia Sax at her website

This is a work of fiction.  All of the characters, organizations, and events portrayed in this story are either products of the author’s imagination or are used fictitiously, and any resemblance to actual events, locales or persons, living or dead, is entirely coincidental.

Since the planet rotation he had been manufactured, he’d been forced to follow other beings’ commands, to adhere to an order he found unnatural. He had finally escaped the Humanoid Alliance’s cruel control, and he planned to create chaos.

He planned to create it on the small planet of Carinae E.

With Menace’s assistance, he guided the ship they’d stolen downward. White sand swirled below them, eddies of grit pinging against the metal underbody. Carinae E was unmonitored, sparsely populated, and thrillingly uncivilized.

“We should have buzzed the settlement’s watchtower.” Excitement coursed through his circuits. “That would have gotten Death’s attention.”

“Death might not have landed on Carinae E.” Menace, his friend and partner in this latest escapade, resembled him in many ways. He had the same dark-brown hair, dark-brown eyes, tanned skin. His model number was inked on his cheek and he wore the Humanoid-Alliance-issued black body armor. They were both highly trained warriors.

But they weren’t clones. There were differences between them, slight but significant. Menace’s hair was cropped short. It wasn’t as spiky and wild as Mayhem’s was.

He also didn’t share Mayhem’s appreciation for the randomness of the universe.

“Death’s female is human.” Mayhem shrugged. “He has to stop somewhere and replenish the nourishment bars she requires.”

Cyborgs could utilize the input tubes built into their ships, inserting those energy and nourishment feeds into their wrist interfaces. Humans didn’t have that capability.

“He should have returned to the Homeland,” Menace grumbled.

Most cyborgs who had found their females returned to the Homeland or other cyborg-controlled space, to the many rules and restrictions there. Females compatible with cyborgs were rare, a fluke of genetics tying a warrior to one particular female. Those ‘lucky’ enough to find their females protected them, and the best place to do that was on the Homeland.

Mayhem had no desire to ever voyage to the Homeland and he had no interest in finding his female. He enjoyed being free, having no responsibilities.

Assisting Death with protecting his female wasn’t truly a responsibility. It was merely an excuse to join him on his adventure.

Death was one of the best warriors in the galaxy. He could protect one small human female.

“He could have returned to the Homeland. We don’t know.” Mayhem loved the uncertainty of their mission. Yes, Death’s ship had been tracked to this sector and yes, Carinae E was the only planet in the sector containing life, but the cyborg and his female could have already left, moving to the next planet, the next unknown.

It was a big glorious galaxy filled with unexplored terrain and unfamiliar beings.

“If this piece-of-debris ship could distinguish cyborgs from humanoids, we’d know if he was here.” Menace smacked the console with his palm. “Our search would be over in mere moments”

They could scan the settlement without landing on the surface.

“What would be the fun in that?” The floor shuddered under Mayhem’s booted feet as the ship touched down. He cut the engines and removed his hands from the control panel. “While searching, we can mix with the locals. Some are bound to be violent and--”

“All beings within the Refuge are under my protection.” A voice crackled over the ship’s communications system. “There’s no killing without my authorization.”

Mayhem stared at the distorted image appearing on the main viewscreen. He
had
planned to
make a comment about killing, a task cyborgs were designed to do, a task many of them thoroughly enjoyed.

Who is he and how did he access our ship’s systems?
Menace asked using their private transmission line.
We blocked all incoming communications.

They were cyborgs, half organic, half machine. No being should be able to break that block.

Mayhem tried to unscramble the image and was unable to. That was another testament to the male’s skills.

“Your friend and his female aren’t in the settlement,” the unknown male informed him, using the universal language. “But you’re welcome to search it, providing you follow our rules.”

Frag that. Mayhem was done with following rules. “How do you know who we’re looking for?”

Had Death and his female been captured by the Carinae? Is that how the male knew about them?

Death was one of their best warriors but there were rumors of genetic enhancements and cloning on Carinae E. It was possible to modify a humanoid until his or her skills in battle rivaled a cyborg’s.

“I know everything.” The male’s tone was arrogant. “Stay by your ship. I’ll send a being to escort you to our gates.”

“I volunteer for that duty, Kralj.” A female joined the conversation, her voice stroking over Mayhem’s balls and hardening his cock.

He straightened in his seat, his circuits humming with awareness, his stomach twisting with dread. There was only one being who’d have that impact on him.

Mayhem stifled a curse. He wasn’t ready to meet his female, not yet.

“They’re targets. That’s all I need to know,” the female, Imee, murmured at auditory levels no human could overhear. Mayhem wasn’t human, however. He heard every word. “They escaped the Humanoid Alliance. They’re flying one of their ships. The Humanoid Alliance will want the males back and will reward me handsomely for that.”

“I haven’t given you permission to retrieve him.” Kralj made no attempt to hide his communications.

“Them,” she corrected. “And you will.” Her confidence made Mayhem smile. She was a strong female, accustomed to getting her own way.

The male made a non-committal noise. “Imee will meet you at your ship, warriors. I recommend that
both
of you remain there.”

Mayhem and Menace looked at each other.

“We’re not remaining here.” Menace was the first to speak. “We’ll climb over the walls, enter the settlement unannounced, search the grounds, and leave before that Kralj being realizes we’ve been there.”

“Two warriors aren’t required for the search.” Once they were within close proximity, a cyborg could sense another cyborg’s presence. “One of us should stay with the ship and ensure Imee, our escort, doesn’t salvage it for parts.”

Mayhem wouldn’t breed with his female, not yet, not until he’d had a few more adventures, explored a few more planets.

But he wanted to meet her, wanted to see if the rest of her was as appealing as her voice, as her take-no-prisoners attitude.

“I’m not sitting around the ship, playing guard duty.” Menace snorted. “Searching the settlement was my idea.”

“You had the idea but do you have the skills to complete the mission?” Mayhem argued out of habit. He wasn’t interested in the search-the-settlement assignment. Imee was his mission. He grasped the container of semi-permanent stain set on the console, the material cool against his fingers. “Scaling the walls unseen requires stealth.”

“Frag you.” His friend’s eyes glittered with humor. “My stealth abilities equal yours and I have the higher kill rate.”

“Because I gave you that last kill on Tau Ceti.” Mayhem dipped two fingers into the container and dragged his fingertips across each of his cheekbones, enjoying the primitiveness of the marking.

“You missed that last kill. You didn’t give me anything.”

“I’m giving you this.” He tossed Menace the container. “Cover your model number.”

“Which was, again, my idea.” The warrior did as he was ordered. The black marks on each of his cheeks made him appear as savage as the beings they’d soon interact with.

“You chatter about so many ideas. One of them is bound to be good.” Mayhem teased his friend.

“I had two good ideas this planet rotation alone.”

“Isn’t that your record?”

“Ha.” Menace rolled his eyes. “As usual, you’re focusing on the wrong issue. I can complete the search mission. There’s zero doubt about that. The more critical question is, ‘Can you safeguard our ship from the female?’” His voice lilted with humor. “She sounds formidable.”

She sounded sexy as all frag. Mayhem stood, eager to see the female named Imee. “She
could
be formidable.” He ran his hands over his weapons, ensuring his daggers remained in his body sheaths and his guns were in his holsters. “Unlike a certain arrogant ass, I don’t underestimate the enemy.”

“Unlike a certain arrogant ass with a higher kill rate and numerous great ideas, you must have meant to say.” His friend laughed. “Try not to get yourself shot this time.”

“Is that reminder for yourself?” Mayhem swaggered toward the exit. “Because if I recall correctly and, being a cyborg, I
always
recall correctly, you were the last warrior to get himself shot.”

“I was stunned.” The warrior followed him.

“I didn’t think Death would pull the trigger.”

Death had tried to stop them from following him, the stubborn male. Like they’d allow him to have all the fun. “You should have known he would. I would stun you any opportunity I could.”

“Which is why you’re exiting the ship first.”

“I’m exiting first because I’m the superior warrior.” A blast of hot, dry air hit Mayhem’s face as he left the confines of the ship. His systems immediately adjusted to the change in conditions. He’d battled opponents in brighter lit, hotter terrain. The Humanoid Alliance often sent cyborgs into battlefields humans refused to fight in.