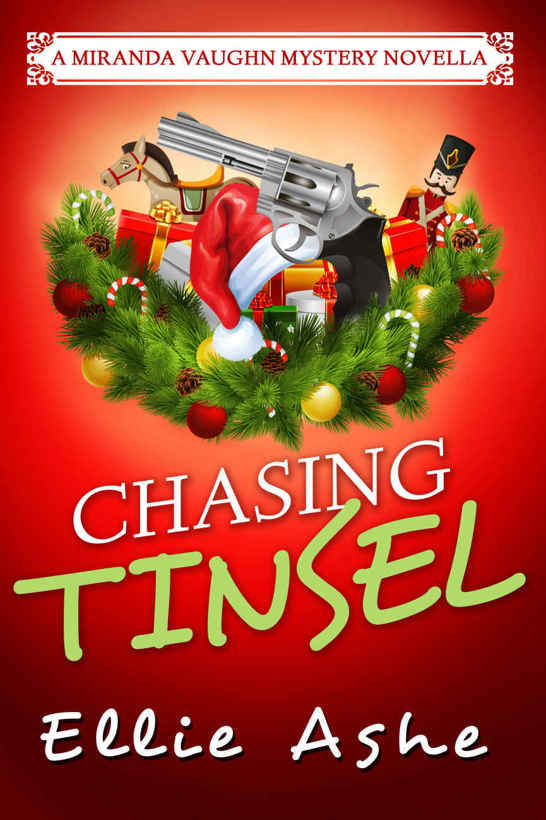 Excerpt - A Good Kind of Trouble

Have you signed up for
my newsletter
? Be the first to know about new releases, sales and get sneak peeks at upcoming books!

This is a work of fiction. Names, characters, brands, media, and incidents are either the product of the author’s imagination or are used fictitiously. The author acknowledges the trademarked status and trademark owners of various products referenced in this work of fiction, with have been used without permission. The publication/use of these trademarks is not authorized, associated with, or sponsored by the trademark owners.

This ebook is licensed for your personal enjoyment only. This ebook may not be re-sold or given away to other people. Please purchase only authorized electronic editions and do not participate in or encourage electronic piracy of copyrighted materials. Your support of the author’s rights is appreciated.

To Farrah, who let me borrow her car.

“What do you think, Miranda? Is this too blue?”

I turned at the question and was startled by the electric blue eye shadow smeared across my young coworker’s left eyelid. Combined with the deep plum lipstick, Breanna looked like she was getting ready for Clown Prom.

“Do you mean that it’s a pretty shade of blue? Or that it’s too blue?”

“Oh,” she said, then paused and shrugged. “Well, I better do the other eye anyway.”

She swabbed another disposable applicator through the eye shadow sample and wiped it across her right lid, so her eyes were equally garish.

“Just don’t use up all the samples. I’m sure someone is going to want to try—” I lifted the small pot of glimmering blue shadow and looked at the label. “—Blue Christmas.”

Well, that was just about perfect.

It was a week until Christmas and I was working the cosmetic department at Drake’s Department Store for a little extra money this holiday season. I was surrounded by holiday cheer at the Prospect Point Mall, but it just wasn’t soaking in yet. My greetings to shoppers were forced, my smiles stiff. I hoped it wasn’t showing, but I was miserable.

And the worst part was, I had no reason to be so bah-humbug.

I had wonderful friends and family. Well, really, my family was my Aunt Marie, but she was great. And we had a good number of close friends coming to her house for Christmas dinner and I was looking forward to seeing everyone this year.

This was much better than last year, when I was under indictment for fraud. I had been acquitted in June and was free to move forward with my life.

If only being found “not guilty” meant that I could walk back into my old job as an investment analyst for a respected global bank. That wasn’t going to happen, especially after I uncovered that the bank was laundering money for narco-terrorists, illegal arms dealers, and an assortment of other criminal syndicates.

With all that behind me, why was I such a downer this holiday season? Life was good. I had a new job that I liked, working for my former defense attorney. I had friends who were awesome. I had a cozy apartment over my aunt’s garage that was decked out in tinsel and lights.

I should be grateful for all the good things happening in my life, and I was.

There was just something missing.

The FBI agent had arrested me two years ago. It wasn’t love at first sight. But when I got myself in trouble trying to clear my name, he’d helped me, and I had thought there was a connection there. But it had been more than a month since I’d seen him, and in that time I hadn’t heard a peep from him.

Hey, sometimes things don’t work out and well, onward. A new year was about to start, and I was turning thirty-two in a few days. It was a good time for a clean slate.

My looming birthday might explain my mood, too. Birthdays aren’t fun after you pass the stage where you get to throw yourself parties and people show up with toys and there’s unlimited cake all day. And when your birthday is on Christmas Eve, it tends to disappear in the chaos leading up to Christmas. I was used to that by now. I’d had thirty-one years of combined birthday and Christmas gifts, and presents wrapped in holiday paper. Not to mention the delayed parties. Very few people want to come to a birthday party on Christmas Eve.

But I was determined to cheer myself up. I had a little more than a week to shake this mood and damn it, I was going to do it. Where better than the Prospect Point Mall?

I moved from behind the counter and began straightening a stack of bubble bath gift sets on a table. From my station at the cosmetics and bath products department, I had a view of the rotunda, where the mall had set up a two-story high fake tree and a small throne where Santa came every evening and all day Saturday and Sunday. The Winter Wonderland display was a familiar scene—its components had been used for many years, from the fake presents stacked under the tree to the thick dingy-white felt that was draped to imitate snow drifts. The kids sure didn’t seem to mind a little dust, though, and lined up every evening to whisper their secret wishes into Santa’s ear.

I went back to straightening the display tables so I could watch what was happening outside the store. The mall was always good for people watching, but even more so during the holidays when more shoppers roamed around. It wasn’t the high-end mall—that was Plaza Heights across town, where they had the expensive anchor stores, valet parking service, and a string quartet playing Christmas carols.

This was Prospect Point, the old shopping center on the wrong side of the city, with the half-drunk Santa who reeked of stale cigarette smoke, unruly elves with neck tattoos, and holiday decor that looked like it gave up all its cheer sometime in the 1990s. Our anchor store was Drake’s, a discount department store, and you were more likely to hand your keys over to a carjacker than a valet. But it was less likely that I’d run into my former coworkers here, so at least there was that advantage. My former colleagues at Patterson Investment Company would be shopping at Plaza Heights and wouldn’t be caught dead at Prospect Point.

Had it always looked so tired? I remembered coming here to bring my Christmas list to Santa when I was a kid. In my memories, it was sparkling with twinkling lights and I would grip Aunt Marie’s hand tight, excited to see Santa Claus in person.

I scanned the rotunda and saw Santa wrench himself out of the throne and stagger toward the entrance to Drake’s. The men suiting up as the big guy were using the employee break room in the basement to change out of their red suit and boots. Santa let loose a belch as he passed, then gave me a wink.

Ugh. My stomach lurched, and I turned away quickly, but a cloud of bourbon burp followed me. Waving my hand in front of my nose, I looked out to see the two elves staring slack-jawed at their phones and ignoring the line of children and their exhausted and exasperated parents standing behind the sign announcing that Santa was taking a break.

“Jerks,” I muttered and moved to stacking the holiday gift boxes in the front window.

From that spot, I could still watch the goings on outside the store, and keep an eye on the cosmetics counter, should Breanna need my assistance. But the only person interested in the store’s name-brand make-up was Breanna, who was sampling nail polish, holding her neon pink pinky finger up to admire the color.

I turned back toward the holiday crowd and watched the families pass by, laden with bags and children. Everyone seemed, well, merry. Across the rotunda, a good-looking couple admired the engagement rings in the window of the Ferris Family Jewelry Store. She leaned against him and whispered something, and his arm tightened around her. I sighed. The woman was in her late twenties, and the way she fit against her boyfriend, snug under his arm reminded me of a brief moment a few months earlier when Jake had pulled me close like that.

The cheery voice behind me yanked me out of my thoughts, and I turned to see Santa standing there, both hands on his stomach, a cheerful twinkle in his eye. It wasn’t the same Santa who had passed by earlier, but the children wouldn’t know that.

And this Santa was very different from the last one. For starters, he appeared to be sober.

He laughed, a deep ho-ho-ho. This guy had been practicing.

“You have a good evening, miss. And keep an eye on those hoodlums over by the slipper display,” he said, nodding his head toward the main entrance. Three teenagers lurked between the quilted booties and a rack of Christmas-themed tote bags.

“Maybe they’re shopping for their grandmothers,” I said.

“Well, you’re the one with the list. I guess I’ll trust you.”

He laughed again and waved as he went outside, where he was greeted like a rock star by the under-eight set. He patted heads and shook hands as he made his way to the throne.

I sold a half-dozen holiday-themed gift sets in the next half hour, keeping an eye on the teens by the entrance. They were goofing around but didn’t seem to be interested in the store.

The crowds were starting to thin as the evening progressed, and I struggled to suppress a yawn. These were some long days—eight hours at my day job, then another four hours at the store. I was only working at Drake’s because I needed a little extra money. I had a nearly full-time job working at the law office of Robert Fogg, reviewing financial evidence in his white-collar cases. But my way-too-used Volkswagen GTI, dubbed the Golf Ball because it was small, white and covered in dents, needed some repairs. It wasn’t anything major, but the passenger lock stopped working and then the latch started sticking. My friend Sarah refused to ride with me until I fixed it and just not with the bungee cord that was currently securing it closed.

Plus, I wanted to make the holidays special for the people who had stood by me the last couple years, so I needed to earn a little extra cash.

It didn’t hurt that the part-time job kept me busy and not dwelling on thoughts that wouldn’t get me anywhere.

Thoughts about Jake Barnes, for instance.

As if summoned by my mind, I saw him—standing a head above the crowd, solid against the tide of shoppers. Broad shoulders, tousled dark hair. And that face. Heart-stopping handsome, with deep, dark eyes. My heart skipped a beat, and my eyes snapped back to the area across the Winter Wonderland setting in the middle of the rotunda.

I studied the crowd, but came up empty. It was like he was never there.

“You all right, Miranda?” Breanna asked.

“Oh, sure, fine,” I said, still looking out the plate glass window, trying to find Jake—or the man who could have been his double. Was it just a figment of my imagination? A play of twinkling lights on the glass?

“Is that Pete?” Breanna asked, peering with me out the window.