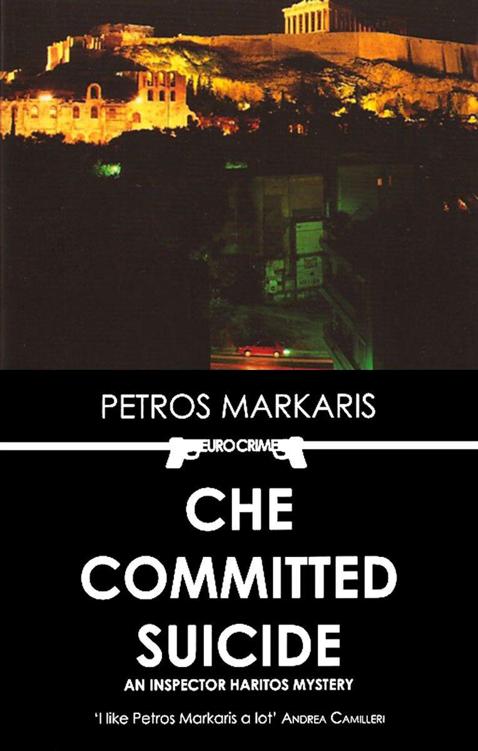 Translated from the Greek
by David Connolly

In memory of my mother, Tassoula

The cat sat opposite me on the park bench staring at me. I always found it there in the afternoon straddled over the back of the bench. The first few days, it stared at me suspiciously, ready to take to its legs if I made any move towards it. When it was sure that I couldn’t care less about it, it stopped paying any attention to me and no longer bothered to disturb itself on my account. In this way, we implemented a policy of good neighbourly relations. It never occupied my bench and, on the few occasions that I was the one to arrive first, I always respected its bench and would leave it free. It was an alley cat, but not the usual orange colour of pedigree alley cats. Its fur was a kind of pinstripe greyish black, like the suits worn at police balls or at funerals. Black ones are invariably reserved for weddings.

Adriani was sitting beside me, knitting away. Since that fatal evening when I had had the bright idea to save Elena Koustas, using my chest to stop the bullet fired by Makis, her adopted son, my life had changed radically. First I had spent eight hours in the operating theatre, then a month and a half in the hospital and now I still had two thirds of my three-month sick leave before me. My dealings with the Homicide Department had been suspended until further notice. I hadn’t been in to see them even once since I came home. My two assistants, Vlassopoulos and Dermitzakis, came round every other day at first, then they stopped the visits and limited themselves to phone calls, till in the end they ceased all contact. Ghikas came only once to the hospital, together with the Secretary General from the Ministry, who can’t stomach me, but on that day he was all smiles and praise for my bravery. In the end, to dragging my steps from the house to the park and from the bedroom to the sitting room, like a Palestinian placed under house arrest by the Israelis.

Not that I was particularly bothered. I still hadn’t got my appetite back and every mouthful stuck in my throat. But I made a thing about it because it helped me to break the monotony.

‘I’ve boiled you a nice bit of chicken and I’ve made a noodle soup.’

‘Chicken again? I had chicken the other day.’

‘And why exactly is it good for me, Adriani? I had a perforating wound in the chest, not a punctured stomach.’

‘It’ll build up your strength. I know what I’m talking about,’ she said definitively, without even lifting her eyes from her knitting.

I heaved a sigh and recalled with nostalgia my days in intensive care, when my loved ones came by to pay their respects for one hour in the morning and one hour in the evening and in-between left me in peace. For the nine days I was in there, surrounded by a white ceiling and two white curtains, I experienced the same ritual twice each day. Fist Adriani would come in.

‘How are you feeling today, Costas dear?’ she would ask with a smile like a flickering candle-flame.

I would try to react to this current of distress that penetrated my cubicle and I pretended to be in better spirits that I actually was. ‘Just fine. Waste of their time keeping me in here, there’s nothing wrong with me,’ I would reply, even though I felt much safer in intensive care.

A restrained sorrowful smile and a slight nod of her head
convinced
me once again that no one can escape their fate. Then she would sit on the only chair, take my hand and fix her gaze on me. When she went, as soon as the half-hour was up, she left me with my hand numb through lack of movement and with the conviction that I was going to kick the bucket some time in the next twelve hours.

If Adriani led me to make out that I was fine, Katerina, my daughter, had me going in the opposite direction. She would breeze in smiling all over her face. ‘Good for you, you’ll soon be up and about,’ she’d say. ‘You’re looking better each day.’

‘Looking better!’ I’d answer her indignantly. ‘I’m a wreck. I’m hurting, I’m worn out and all I want to do is sleep.’

Her reply was a warm kiss on the cheek and a tight hug that made my wound hurt even more.

The last to come in was Eleni, my sister-in-law. She’d almost swum from the island where she lived when Adriani had told her that they’d brought me to the hospital half-dead.

Eleni belonged to that category of people who cheer you up by relating the sorry plight of others to you. So she’d begin by counting out one by one all those who were sick in her family, starting with her daughter, who suffered from an allergy and had to be careful of what she ate and how she dressed, then moving on to her husband, who had high blood pressure and who went around with bottles of pills in his pocket. Then there was her mother-in-law, who was
confined
to bed because she had broken her hip and whom she had to clean and change every day, taking it in turns with her sister-in-law. She even threw in a distant cousin, who had come off his motorbike and had been three months in hospital and it was touch and go whether he’d live. Finally, she came out with the moral of it all: ‘So you should be grateful and thank God each day,’ she said as she left.

When, however, Adriani’s half-hour and Katerina’a and Eleni’s quarter of an hour were over, I had all the time to myself until the evening. In the ward, total silence reigned; the nurses were
exceedingly
discreet and, in general, no one bothered me.

The cat opened its cavernous mouth and yawned majestically. As though it were bored with my presence. I didn’t take offence, I’m equally bored with myself.

‘Shall we be going?’ I said to Adriani, while inside I asked myself why, it would be just as miserable at home.

‘Just a bit longer. The fresh air is good for you.’

‘I meant in case Fanis comes …’

‘Don’t expect him today. From what I recall, he’s on duty.’

It wasn’t that I was anxious to see the doctor, but quite simply I get on well with my daughter’s boyfriend, Fanis Ouzounidis. My relationship with Fanis was in inverse proportion to the course of the Athens Stock Exchange. Whereas it reached a peak and then began to fall, our relationship first reached a low and then began to climb. I’d met him as the cardiologist on duty when I had ended up one night at the General Infirmary with acute ischaemia. I immediately liked him because he was always smiling and full of wisecracks. Until I discovered that he was seeing my daughter and I was furious. In the end, for Katerina’s sake, I reconciled myself more with the idea that he was her boyfriend than with him personally. I felt that he had betrayed my confidence, and when you have come up through the Police Force, the idea of betrayal clings to you like a leech. It was in intensive care that I first felt close to him, and that had nothing to do with medicine. He’d pop in at around twelve, just before lunch, and always with a smile on his face. And every time, he called me
something
different. From ‘And how are we today, Inspector’ to ‘How’s my future father-in-law, then’ and the ironically intoned ‘Dad!’ This was repeated three or four times a day, and also at night, when he was on duty, and it was combined with discreet questions about how I was getting on, whether I needed anything. I found out about this indirectly, from the nurses, who every so often came out with things like ‘We have to take good care of you, otherwise we’ll have Doctor Ouzounidis after us.’

Things began to turn sour from the moment that they took me out of intensive care. That same day, Adriani moved into my room on a twenty-four basis and began to take charge of everything. Partly the fact that I was a police officer who had been wounded on duty and partly the relationship between my daughter and Fanis meant that the doctors thought they had to give a daily report to her on the course of my recovery, on the medicines that they were
administering
to me and on the minor problems I faced from the effects of the operation. From the third day, she would stay in the visiting room and strike up a conversation with the doctors on every matter you could think of. If I were to dare venture an opinion of my own, for example, that I was in pain or that I felt the wound tugging, she would cut me short at once. ‘Leave it to me, Costas. You don’t know about these things.’ The doctors kept their anger in check because of Fanis, I was too weak to react, while the nurses hated her but didn’t dare to show it. In the end, it was Katerina who got up the courage to talk to her. Adriani burst out sobbing. ‘All right, Katerina,’ she said through her tears, ‘if I’m not the right person to take care of my husband, then hire a private nurse and I’ll go home.’ Her sobbing took the wind out of Katerina’s sails and sealed my fate as a hostage.

‘It’s chilly, put your cardigan on.’ She took the cardigan that she had knitted for me out of her bag and handed it to me.

‘You are cold, Costas dear, I know what I’m talking about.’

The cat got up from its place, stretched and jumped lightly down to the ground. It cast one last look at me, then it turned and went off with its tail erect, like a patrol car aerial.

I have no relationship at all with animals, neither a friendly nor an unfriendly one. But that cat’s arrogance got on my nerves.

I took the cardigan and put it on.

Fanis proved Adriani wrong. He showed up at around seven, just as I was reading the evening newspaper. This was another novelty of my post-hospital life: in the past it was dictionaries that monopolised my reading interests. Now I had moved on to newspapers, as an antidote for my boredom. I started with the morning paper, brought to me by Adriani, then I thumbed through my dictionaries; when I go out for my afternoon stroll, I buy the evening paper and read once again, in carbon copy, the morning news and, finally, I hear the same news for a third time on television just in case I’ve missed anything. The doctors kept talking of post-operative side effects, but they were nothing compared to the side effects of convalescence: unbearable boredom and inactivity to the point of paralysis.

A Crack in the Wall by Claudia Piñeiro
March of the Legion by Marshall S. Thomas
Promise Me Darkness by Paige Weaver
Dead Angels by Tim O'Rourke
Give Us This Day by Delderfield, R.F.
Nightingales on Call by Donna Douglas
The Biology of Luck by Jacob M. Appel
Cheating at Solitaire by Jane Haddam
Un jamón calibre 45 by Carlos Salem
All That Glitters (Avalon: Web of Magic #2) by Rachel Roberts
Our partner