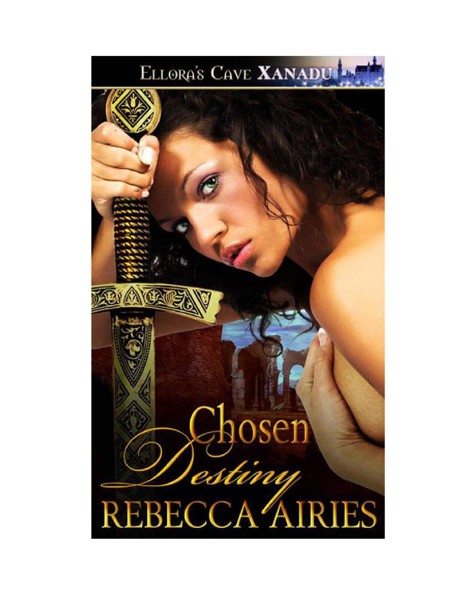 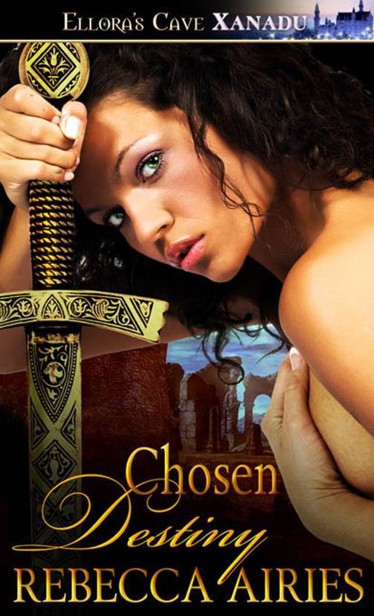 Meagan’s village is under attack and she’s been accused of being a spy. Refusing to

let her home fall to the Dark Sorcerer, she has no choice but to take up the weapons of

her ancestors. Dealing with the two gorgeous men who come to aid her in the fight is

Samiel and Jaeson came to fight, but finding the woman whose magic matches

theirs surprises them, as does her reaction. She’s so focused on the battle that she barely

seems to notice the pair. With kisses and sensual caresses, they turn her attention to the

desire building between all three of them.

Meagan’s tempted by their seductive touch, but defining her place in their life is

difficult and time’s running out. The Dark Sorcerer has to be stopped before Meagan is

free to discover if Samiel and Jaeson are offering forever…or a moment in time.

part by any means existing without written permission from the publisher, Ellora’s Cave Publishing,

Warning: The unauthorized reproduction or distribution of this copyrighted work is illegal. No part of

this book may be scanned, uploaded or distributed via the Internet or any other means, electronic or

print, without the publisher’s permission. Criminal copyright infringement, including infringement

without monetary gain, is investigated by the FBI and is punishable by up to 5 years in federal prison and

editions and do not participate in or encourage the electronic piracy of copyrighted material. Your

support of the author’s rights is appreciated.

For those who make the hard choices and push through in spite of the odds. Thank

Meagan Danae panted as she sprinted down the street. Her feet slipped on the

stone paving as she rounded the corner and she skidded, nearly falling. Her heartbeat

jumped up another notch and fear lurched through her. She couldn’t fall. They’d kill

her. She’d never thought she’d have to flee Apolin like this.

Her black hair whipped across her face. She didn’t take time to brush the thick

strand out of her way. She had to keep moving. Hurt, betrayal and confusion mixed

inside her. She dashed down the street, dodging carts and people. The only good thing

about an occupied street was that they wouldn’t hurl any energy bolts here. Her shields

wouldn’t take too much more battering. She had to get out of here. She jumped forward

creating a tunnel right in front of her.

Landing on her feet in a soft grassy meadow, Meagan turned and waited a few

moments until she could be certain they hadn’t followed her. She grimaced. She’d left

the village because she knew they probably wouldn’t follow. They’d been zealous and

she really didn’t want to have to start taking the offensive. They were her sect sisters.

She didn’t want to hurt any of them.

Her stomach felt heavy and her jaw ached. She couldn’t understand how this had

happened. After returning from a scouting mission, she’d been practically accused of

being a spy or a Dark Sorceress by the elders of the Hanir sect. Before she’d even had a

started trying to kill her. Not wanting to hurt anyone, she’d run. Sadness and pain

weighed heavily in her chest. She hadn’t done anything to deserve that kind of

Thrusting her hand through her hair, she looked around the area. Trees fronted two

sides of the meadow giving it an air of security. A small stream cut across the grassy

expanse. Drawing the sharp tang of sap and spring air into her lungs, she tried to calm

down and push away the hurt. She had to think. No matter if they couldn’t follow her

voice. She just wished she could talk to her sister or her brothers right now, but she had

no idea where exactly any of them were at the moment. She’d have to do this on her

own and she couldn’t waste time. More
merdanons
were coming. She had managed to

tell them that, but since they doubted her loyalty they probably hadn’t believed her.

There was little hope that any of the dragons or vampires would show to help tonight.

of the dragons in the air.

Meagan licked her lips and raised her hand to the amulet at her neck. She didn’t

know if she was the one meant to take up the weapons, but she had to try. In spite of

village. She had to try to help save the people from the attack.

She looked around the grassy meadow. This wasn’t where she needed to be if she

was going to try to take up the weapons of her ancestors. She took a deep breath and

formed another tunnel. She stepped into it and felt the dizzying disorientation.

She was hurled into bright sunlight a moment later. As she exited the tunnel, she

took a few steps trying to deal with the momentum. Her toe caught on a rock. She

stumbled and fell to one knee on the rocky ground. Standing, she grimaced as her knee

stung and she saw the torn gray cloth. She ignored it. She had more important things to

worry about right now. Looking around, she chose the path that seemed to be heading

upward. She had only ever read of the old temple and looked at old maps of this region.

This wasn’t a region where the Hanir sect held power.

Huge trees grew alongside the rough, rocky path. The leaves formed an almost

solid canopy overhead, giving the path a shadowed, closed-in feel. She wished the

cover wasn’t quite so thick but at least she could still see. She just hoped she was on the

right path. This could take some time and that was something she wasn’t sure she had.

When the trail became steeper she was fairly sure she’d chosen he right direction.

She kept climbing and kept her eye out for wild animals. A
volk
or a
necalot
could do a

lot of damage before she managed a spell to stop them if she didn’t see them first. She

had no desire to be bitten or clawed. The chatter of
trimoks
in the trees was a little

reassuring. She saw one of the small feathered animals swoop down and snatch an

insect off the branches. They wouldn’t be so noisy or relaxed if there was a predator in

building storm. Her shirt clung to her skin, dampened by her sweat. She followed the

curving path up until it finally stopped near the entrance to a cave. She smiled and

relaxed a little as relief flowed through her. This was where she needed to be.

opening. She created an orb of light and tossed it into the air. The light bobbed and then

floated in front of her as she started into the dark opening. The dark gray rock tunnel

narrowed a bit and then opened into a large cavern. It was obvious the temple was still

used by the local sect of witches.

The rock walls had been carved into scenes and images from floor to ceiling. Some

of the reliefs still bore the paint of a recent ceremony. The statues placed around the

room were draped in the finest cloth. Bowls of flowers and fruit rested on a marbled

rock altar in front of a huge stone warrior. She walked past the altar to the giant statue

behind it. Placing her hands on the large pedestal beneath the great warrior’s feet, she

sent a surge of power into the stone. The stone moved beneath the statue’s feet. She

The dark square opening in the floor loomed in front of her. Waiting only for the

bobbing ball of light to float into the gap, she stepped down into the hole. The dark gray

walls showed etched scenes of battle and everyday life in the age of the ancient kings.

She continued down the long hallway to the door covered with painted scenes. She

slipped her family seal off her necklace. She took a deep breath and placed the seal in

the small depression in the center of the door. This was the test. Was she the one meant

to take the weapons? If she wasn’t, she wouldn’t even be able to open the door.

The symbol slowly began to glow and the door swung open. She let out a slow

breath. She didn’t know what she would have done if it hadn’t opened. Somehow,

she’d have had to find a way to help the other witches defend the small town. She

couldn’t just walk away from the village.

large stone table in the center of the room. There were so many of them. How was she

ever supposed to know which one to pick? She walked around the room slowly. Her

eyes ran over the weapons on the table, but she didn’t see anything that caught her eye.

She moved to the back wall and looked at the blades there. A sword caught her eye. The

blade was straight and shone in the white light. It wasn’t silver like many of the other

weapons. The blade was golden with silver etching. She reached for it and the matching

knife. Power pulsed from the sword leaving her hands tingling as it raced up her arm.

The energy rolled through her straight to the core of her power. Her own magic swelled

and responded. Energy surged through her to the sword. She stood there feeling the