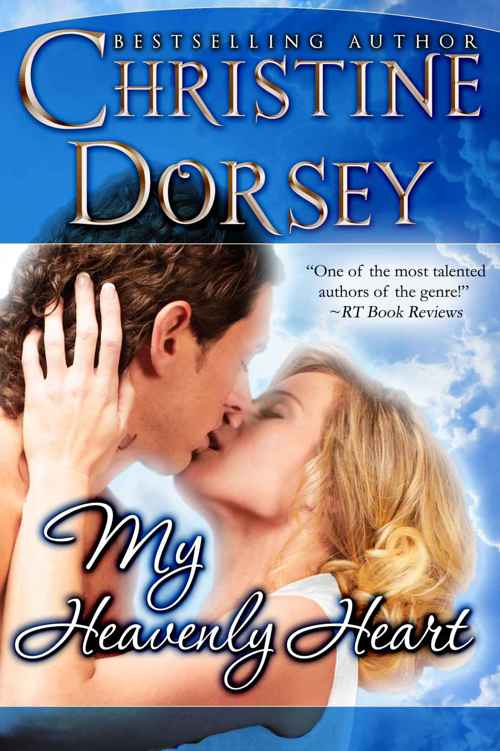 For my father, who taught me of the “other side.”

And as always for Chip.

Ebook Design by
A Thirsty Mind

All rights reserved. No part of this book may be reproduced in any form or by any means without the prior written consent of the Author, excepting brief quotes used in reviews.

This book is a work of fiction. Names, characters, places and incidents are either products of the author’s imagination or used fictitiously. Any resemblance to actual events, locales, or persons, living or dead, is entirely coincidental.

This ebook is licensed for your personal enjoyment only. This ebook may not be re-sold or given away to other people. If you would like to share this book with another person, please purchase an additional copy for each person you share it with.

“Coincidence is God’s way of performing a miracle anonymously.”

“Blast Elizabeth and her confounded romantic notion of love.”

A grimace accompanied her words as evening dew seeped through Lady Rachel Elliott’s satin slippers. They were blue, encrusted with silver lace, and they matched her gown of silk taffeta. “All celestial blue and star glow,” Prince William, the king’s brother had said, when he saw her earlier. “You look like an angel.”

“Perhaps, but that was before I overheard Lord Albert, Duke of Bingham, demand to know his wife’s whereabouts,” Rachel grumbled to herself as she shifted the wide skirts of her gown to avoid a flowerless rosebush. Despite her effort a bit of lace caught on a thorn. She gave the fabric a yank feeling more devil than angel now. Rachel imagined she looked it, too. Neither the shoes nor the gown were meant for tramping along overgrown garden paths and for all the care she took while hurrying through the arbor, Rachel could tell her carefully arranged and powdered wig was askew as well.

No doubt about it, her evening was ruined. And all because her cousin and friend, Lady Elizabeth Bingham, insisted upon continuing her dalliance with Sir Geoffrey... even though her husband was newly arrived at court.

Rachel paused to get her bearings. Behind her, aglow with candlelight and warmth, was Queen’s House. If she listened intently, Rachel could hear the melodious strains of Handel played by Queen Charlotte’s band. There was laughter and fun, and scores of swains, their lips nigh dripping with flattery, awaiting her. The tug to return was strong.

“Oh...” The sound started deep in Rachel’s corseted chest and gritted through her clenched teeth as she forced herself to turn away and tramp down the grass-covered slope toward the lake. Wait till she found Liz. She would show no mercy in reproving her cousin. And if Sir Geoffrey spoke up... well, he would feel the sharp edge of her tongue as well. Rachel didn’t care if he was broad of shoulder and handsome of face.
She
didn’t even care that his very smile sent Liz into a swoon. There was a time and place for such affairs. And from the expression on Lord Bingham’s face when he stormed from the ballroom, it was obvious this wasn’t one of them.

There were fewer lanterns now that she’d left the formal gardens. They offered little light and Rachel hoped she’d be able to find Liz and Geoffrey. “Don’t let them have gone off to his lodgings,” she pleaded to no one in particular. But Rachel didn’t think they’d risk leaving the palace this evening.

“Rachel, I must go to Geoff and explain,” Liz had insisted earlier in the evening after guiding them both into a small private alcove.

All around them music played, gaiety abounded, and Rachel’s mind was still on her flirtation with the king’s brother. It took a moment for Liz’s words to register. “Explain what?” Rachel asked, but Liz had simply looked at her with that dreamy expression on her face as if to say Rachel wouldn’t understand.

And she didn’t. If this was what love did to a person, Rachel was glad not to be afflicted with the emotion.

Rachel paused when she heard the voices over the gentle swishing of the lake lapping the shore. With a sigh she set off toward the sound. The grass was taller here, wetting the hem of her gown even though she lifted it. Why couldn’t the lovers find somewhere more civilized to meet, for goodness’ sake?

“There you are.” Rachel marched toward the couple when she spotted them standing near the end of the pier that jutted out into the lake. It was too dark to see the expressions on Liz’s and Geoffrey’s faces but Rachel imagined they both were surprised when she spoke. They separated quickly, though Sir Geoffrey kept his arm about her cousin’s shoulders.

“What... what on earth are you doing here, Rachel?” Liz sounded thoroughly flustered.

“I should think that obvious.” Rachel gave an unladylike snort. “I’ve come to fetch you back.” Rachel addressed Liz. She decided she didn’t give a fig what Geoffrey thought or did. And it wasn’t because he monopolized her cousin’s time—time usually spent with her—since his arrival at court.

“Yes, you did. And though I thought at the time it utter foolishness—”

“I fail to see why Elizabeth’s and my whereabouts are your concern, Lady Rachel.”

Rachel opened her mouth to tell him what she thought of men like him but before she could Liz stepped between them. “Please.” She touched Geoffrey’s sleeve with one hand, Rachel’s with the other. “Please don’t argue. You’re the two people I love most in the world.”

Geoffrey seemed to think this admission called for him to step closer to his beloved.

“I thought you should know,” Rachel began, “that your husband is looking for you.”

“Albert stopped gaming long enough to realize I was gone?” Liz seemed to sink back into Geoffrey’s embrace. “Do you think he suspects?”

“I haven’t a clue.” Rachel softened her voice and reached for her cousin’s hands. They were cold. “I think we should go back to Queen’s House. He seemed angry and—” Rachel paused when Liz made a low whimpering sound. “Elizabeth, it’s the only way. I’ll say we were together.”

“You don’t understand.” Elizabeth’s fingers linked with Rachel’s. “You don’t know what he’s like. If he suspects something he’ll—”

The rest of Elizabeth’s words were cut off when a shot rang out sending a flock of ducks exploding into the night sky. It also sent Geoffrey crumbling to his knees.

Rachel’s head whipped round toward shore in time to see the man standing there, a pistol in each hand. “Albert.” His name escaped her on a gasp as another report sounded. Through their linked hands, Rachel felt the jolt of the ball slamming into her cousin. Then Liz fell forward, the weight of her body sending Rachel plummeting off the pier into the lake.

Panic seized Rachel the instant she hit the frigid water. The lake embraced her as surely as if it had tentacle-like arms, dragging her down. She fought, struggling in its grip till her limbs grew weak. Screams for help thundered in her ears but succeeded only in filling her mouth with the foul taste of death.

She tried to think. It was the heavy gown that caused her to sink, the silver lace and metal hoops. If she could only rid herself of her clothing. But it had taken three maids nearly an hour to dress her and no amount of wriggling could undo their accomplishment.

She was dying. Her chest burned, the pain near unbearable. Then suddenly it was gone. So was the frigid water and the awful fear. All that remained was a slightly dizzying spin, spiraling her upward. And calm. Blessed calm.

“But how was I to know she’d go after her cousin? It wasn’t at all like her.”

“Haven’t you learned anything since you’ve been here? Mortals are full of surprises.”

How annoying they were, Rachel thought as she tried to ignore the argument. They threatened to ruin an otherwise wonderful experience. The dark that surrounded her was soft and soothing. And up ahead a white light shone so blindingly pure and warm that it should have hurt her eyes. Except that she had no eyes, or body either.

Never before had she felt so accepted, so cared for. Love surrounded her, flowed through her as she drifted about. Content, though anxious to move toward the light. At peace except—

“Would you cease your whining? And what do you mean
we
?”

“Surely you plan to help me.”

“I shall remind you again. It was your mistake.”

“But I’m merely an apprentice. You were to guide me. And I only glanced away for a moment.”

“Stop it!” She’d had enough of their bickering. Of them disturbing her. But Rachel hadn’t meant to yell at them. Actually she hadn’t yelled. It was as if she communicated with them on some plane other than the spoken word. Whatever it was, they both seemed stunned by her scolding. At least they were silent for a moment. That is until the whiner started again.

“See, I told you she was trouble.”

“You didn’t say trouble, merely unpredictable, and that I will readily concede.” He sighed. “The question is what is to be done.”

“Done about what?” Rachel decided she must help them solve their dilemma if she was to have any peace.

“Yes,” the whiner agreed in an accusing tone. “It wasn’t your time to die.”

“Die? But I’m not d—” Rachel couldn’t complete her denial. For as difficult as it was to accept—she didn’t feel dead—in her heart she knew it was true. But where were the things she’d been led to expect? The host of heavenly angels? Or, God forbid, the fiery brimstone? And Rachel had another question. “What happened to Liz?”

“She’s gone on, as has her soul mate Geoffrey.”

Rachel knew instinctively the spirit meant gone on toward the light. The radiant light that shimmered just out of reach. “Then send me on,” Rachel insisted. “I’m ready to go.”

“If only it were that simple.”

For the first time Rachel felt an inkling of fear. “You can’t mean I’m destined for... for hell?” At that moment her soul seemed awash with memories of her life. And to Rachel’s discomfort, some shone less than sterling in the pure light of the afterworld. There was the time she lied to her mother about the reason for her scrapped knees and torn dress. Then there was the gossip. She was quite fond of court intrigue and never hesitated to pass any crumb of information along to Liz. And she wasn’t very pious. Or charitable. Just last week she passed by an alms seeker pretending not to see the wretched man. And then there was—

“Oh, do stop your reminiscing. I don’t care to review all your misdeeds. Besides, you’re not destined to eternal damnation.”

“Thank God,” Rachel thought with a sigh of relief.

“Precisely. But never mind that now. Didn’t you hear what Ebenezer said? It wasn’t your time to die.”

Ebenezer? The spirits had names? Rachel pushed that thought aside. The answer to the problem seemed simple enough. It wasn’t her time to die, so... “Send me back to my life.”

Preying on You by Elise Holden
Bound by Prophecy (Bound Series Book 3) by Smith, Stormy
One Realm Beyond by Donita K. Paul
Sacrificed (The Ignited Series) by Dantone, Desni
Wild Kat by Martin, K.S.
Las hormigas by Bernard Werber
B.B.U.S.A. (Buying Back the United States of America) by Lessil Richards, Jacqueline Richards
Supernatural--Cold Fire by John Passarella
The Many Sins of Lord Cameron by Jennifer Ashley
Eleven Eleven by Paul Dowswell
Our partner