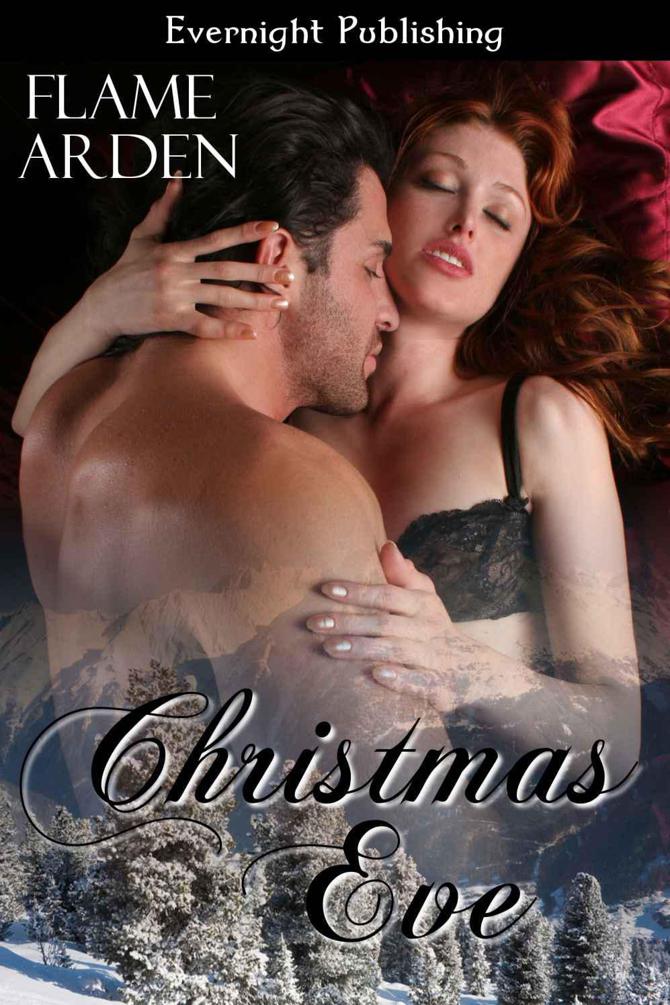 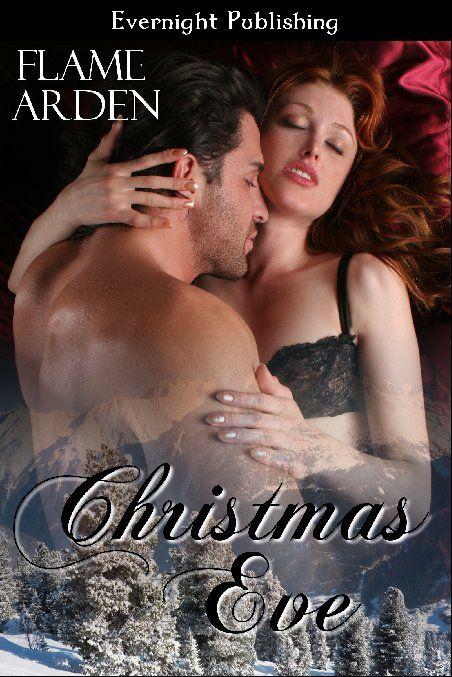 Nick St. Clair smoothed a non-existent wrinkle from his midnight blue lounging robe and glanced around the cozy living room of his spacious mountain retreat. The arrival of his lady of the evening would make the holiday complete. What was keeping her? Canapés, nuts, and champagne on ice awaited her on the library table. Candles flickered seductively on the end tables and hearth. The oven, turned low, warmed their evening meal. The only thing preventing him from enjoying a passion-filled evening was the tardy arrival of his date.

If she proved as desirable as Priscilla promised, he'd invite the lady to keep him company for the entire holiday week, instead of just for tonight. The women Priscilla's Escort Service had previously provided were prompt. What was keeping this one?

No way was he letting the family-centered sentimentality of the season affect his mood. Family celebrations, or the lack there of, seldom entered his mind. Why miss something he'd never known? Still, around this time of the year he always experienced an unwanted emptiness, a yearning he could never name. For tonight, he would count on his overdue date to direct his thoughts in a more libidinous direction. One certain to entertain.

I'll gladly drink to that.
Nick lifted a snifter containing an inch of the finest brandy to his lips and waited for the fiery burn of the expensive liqueur to make its way down his throat.

If this woman failed to show, he would wish he had stayed in town where any number of attractive available women flocked to the Las Vegas Strip. He wisely avoided them. Gold-diggers, the entire lot, unattached women Hell bent on tripping at his feet.

To succeed in business a man had to be wary. Same with his personal life. Since he'd come into this unexpected inheritance, he could never be certain if a woman cared about him or his money. He'd quickly learned not to risk finding out. A lady for hire best suited his needs.

So, what was keeping her?

Nick glanced at his watch.
She's damn late.
He hurried to the kitchen to lower the oven temperature and hopefully save their meal.

Meanwhile next door, Eve Adohr slammed shut the front door of the weekend home her client had listed for sale with her firm. The prospective buyer she'd promised to meet there never showed.

Holding her temper in check, she stepped out onto the snow-covered concrete stoop and made certain the dead bolt slid into place, then returned the key to the lock-box attached to the screen door.

As she moved out from under the overhanging roof, dry flakes of thickly falling snow caught in her hair and melted on her face. Coming down off the porch, she cautiously placed a booted foot on each ice-slicked step.

Over the past few hours, events beyond her control had stacked up to spoil her Christmas Eve. Hoping nothing else would go wrong, she buried her nose in her scarf and headed for her gull wing Mercedes parked in the drive.

Why hadn't she realized sooner that she neither wanted nor needed her association with Jeffrey Wetherstone, her as-of-five-hours ago ex-boyfriend? Now she was free to move to the next phase of her life, a life gloriously free of Jeffrey.

He had hit the ceiling when she'd told him she had to work tonight. Like a spoiled child, he'd insisted she call her client and cancel.

How could she? Real estate didn't sell itself. True, clients didn't usually ask to view mountain property after dark, and never before on Christmas Eve, but how could she refuse? Her business depended on sales.

Just this past Monday she’d listed the property, a spacious weekend retreat half-way up Mt. Charleston. And had counted herself lucky when, this morning, an interested buyer called and demanded she do a walk-through tonight.

His request interfered with Jeffrey's plans, the annual Christmas Eve feast at his parents' house, a decidedly dull event he'd insisted she attend last year. Sure, she regretted breaking their date at the last minute, but this evening was the only time the prospective buyer had free before leaving town for the holidays.

True to form, Jeffrey refused to understand. Accused her of placing more importance on her fledgling company than their relationship, which was true. Upset with her, he had broken off all ties. Now this! To top off the start of her holiday, the client never showed up.

She had waited inside, shivering, for two hours, watching a light snow turn into a snow storm. The cabin had been without heat for so long the floors refused to warm no matter how high she set the thermostat. Inside her boots, her toes felt frozen.

Perturbed, Eve settled into the driver's seat, turned the key and revved the motor. Too impatient to wait for the car's heater to melt the snow, she turned on the windshield wipers.

The frozen blades swept across the glass with a scraping sound. Crusted ice now streaked the back window instead of accumulated snow. How would she ever see to back down this steep drive?

She tried, but began to shake. "Come on heater. Make me warm."

A small patch of ice melted off the rear window. Enough to see to back up? Maybe. Might as well try.

She slipped the car in reverse and gave it some gas.

The car flew down the slick drive. Eve slammed the brakes on, hard, sending the vehicle into a heart stopping skid. When it finally slid to a halt, the left headlight of her prized transportation pointed up in the air.

And her deceased grandfather's most prized possession sat at a crazy angle, the classic car she'd fondly clung to while rejecting all other signs of wealth half-buried in a ditch.

She shifted into drive. A rear tire spun but the car refused to move.

Struggling to get out of the tilted car, she opened the driver's door, grabbed the center post, and levered herself to the drive. She took a peremptory look around, then reached back inside and grabbed her cell phone. Although she had never before used her roadside assistance plan, she needed that service tonight.

The instrument, cold as the falling snow, shook in her hand as she dialed. While waiting for her call to go through, she held the chilled gadget well away from her ear. After a moment a voice said, "You are either out of your service area or the party is not answering your call."

Eve clicked off the phone and climbed back in out of the cold. The snow, which had begun before dark, clung to everything in sight, but also reflected the pale glow of light from a window of the house next door.

An offer to pay the homeowner to help get her car out of the ditch would get her back on the road in a matter of minutes, if he agreed. Did she dare ask for help from a stranger?

Depends on what he looks like
. She wouldn't know that until he opened the door.

Eve again carefully climbed out. This time she paused long enough in the drive to remove the magnetic sign identifying her as a real estate agent from the side of her car and shove the necessary but offensive advertisement behind the seat. Then she grabbed her Gucci handbag and locked the car.

Not that her vehicle was going anywhere. But with luck, she would have it moving soon.

She inched her way up what she hoped was a walkway leading to the front steps of the adjoining property. She'd hate to trample a bed of prized perennials, then ask to use the homeowner's phone.

She looked back for one last glimpse at her car before she climbed the steps. Her boots had left tracks in the snow like Santa’s reindeer would make later tonight.

Shaking her head, she grinned. She'd clung to that belief long after the other girls in her private school had relinquished theirs. Down below in Las Vegas, her friends’ children were probably already in bed, dreaming of the merry old gent. To Eve, that was what the holidays were all about.

Through the hush of new fallen snow Eve tiptoed across the neighboring porch. A friendly smile might help attain her goal. As she rang the bell, she hoped her frozen lips would cooperate when she attempted to explain her situation.

Finally. Nick took one last look around. Everything seemed in order.
Don't let your irritation at your hired date's tardiness show. She might have a reasonable excuse for being late.

Straightening the lapels of his hip-length robe, Nick crossed to the door. Beneath the robe, black silk pajama pants provided minimal warmth but kept him decent.

"I'm sorry to disturb you," the statuesque woman on his porch said with a bright smile, "but I've done something really stupid and wondered if you—"

"Don't just stand there." Nick opened the door wider, anxious to see what his credit card had purchased this time. "Come in."

"Thanks." After a slight hesitation, the woman stepped gracefully inside. Ice crystals clung to the fine wool scarf wrapped loosely around her neck, and to her stylish boots. She was all bundled up in a long coat, but Nick's mind's eye had no difficulty sketching what he hoped was hidden underneath.

The lady wore
far
too many clothes.

"I'm afraid my boots are wet." She glanced first at him. His welcoming smile seemed to stun her. She stared at her boots. "Where would you like me to stand?"

"By the fire." Nick indicated the hearth. "You look frozen." Although in need of a woman, he had no desire to bed an icicle. He wasn't
that
desperate.
Yet.

She crossed the room at a slow pace, her fluid movements an aphrodisiac to him, although each tentative step left behind a patch of melting ice. Sex-deprived man that he was, his living room suddenly felt too warm. Things were looking up.

"I've been busy on the computer," he said, surprised by the sudden gruffness of his usually smooth voice. He joined her before the fire. "I hadn't noticed it had begun to snow."

Five Run Away Together by Enid Blyton
Falke’s Captive by Madison Layle & Anna Leigh Keaton
Stay by Paige Prince
Life in the Court of Matane by Eric Dupont
Mai Tai'd Up by Alice Clayton
The Loner: The Bounty Killers by Johnstone, J. A.
Doubt by Anne-Rae Vasquez
Untaming Lily Wilde by Olivia Fox
The Boy Next Door by Katy Baker
The Heretic by David Drake, Tony Daniel
Our partner