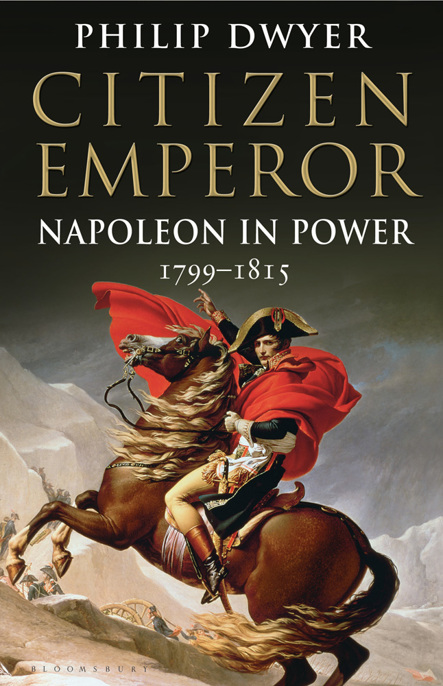 Victory is a Goddess greedy for death; her laurel is a branch

dripping blood and soaked in tears.

1 The Invention of a Saviour

3 Italy and the Consolidation of Power

5 The Politics of Fusion

7 The End of the Revolution

8 ‘The First Throne of the Universe’

10 ‘The Rage of Conquest and Ambition’

19 ‘The Struggle of Obstinacy’

22 The Deliverance of Europe

26 A Parody of Empire

The Invention of a Saviour

‘Neither Excitement nor Enthusiasm’

It was still dark, the early hours of the morning of 11 November 1799. Bonaparte’s carriage stopped before a modest house in the rue de la Victoire where Josephine was waiting for him in bed in a state of nervous anxiety. They stayed up talking for a while, going over the events of the previous day. He learnt that his mother and one of his sisters, Pauline, had come to the house. They had been at the theatre when they heard the rumour that Bonaparte had just escaped an assassination attempt.
1
Pauline apparently had been unable to stop crying until news arrived that all was well. The strain the conspirators must have suffered over the last two days would have been enormous. Bonaparte appears to have taken it in his stride, with the exception of that little incident that had taken place amid the Council of Five Hundred at Saint-Cloud when the epithet ‘Outlaw’ was hurled at him by a number of deputies, furious to see a soldier enter the chamber where they were deliberating. He had nearly fainted. A little later that morning, when Bonaparte dismissed his secretary Bourrienne, he supposedly said as an aside, ‘By the way, we will sleep tomorrow at the Luxembourg [Palace].’
2

Bonaparte was just thirty years old. He still cut a relatively svelte figure although over the years he would become portly, if not obese. His dark-brown hair was beginning to recede. He had a scar on his leg where an English bayonet had once pierced him. His skin was sallow, and his eyes grey. He was five feet six inches tall with a slight build. He did not have any children, but he would eventually sire four or five, only one of them legitimate, and none of them with his first wife Josephine. By any standards, his had been a meteoric rise. Less than three years before, he had been a nonentity on the political and military scene. Now he was one of the major political contenders, and in time would become one of the most recognized men in European history, with a hat and a pose – that is, his right hand in his vest or his hands folded behind his back – that would become iconic.
3
No one yet knew, however, what he was truly capable of.

Newspaper accounts of the previous evening’s events had already appeared by the time Bonaparte awoke after a few hours’ sleep. It was 20 Brumaire in the Year VIII (11 November 1799), a
décadi
, a rest day in the revolutionary calendar. At the Château de Saint-Cloud on the western outskirts of Paris, where the coup unfolded in the night of 10–11 November, the conspirators had formed a new provisional government – dubbed the Consulate because headed by three consuls, Emmanuel Joseph Sieyès, Roger Ducos and Bonaparte. The trip from Josephine’s house in the rue de la Victoire to the Luxembourg Palace, where Bonaparte was to meet with the other two provisional consuls, was a short one. On his way, he would have seen people going about their daily business, taking a stroll on what turned out to be a mild, rainy day, gazing at the troops that had been positioned at strategic points throughout the city. Some stopped to read the proclamations posted on the walls of Paris explaining what had taken place, possibly relieved to discover that Bonaparte had escaped an assassination attempt against him, smiling perhaps at the story of the defenestration of the Five Hundred. The minister of police, Joseph Fouché, was doing his best to spread that one around the cafés and the theatres.

From a reading of the official explanations, plus the accounts given in some of the newspapers, it would have been apparent even to the most heedless observer that the coup had been Bonaparte’s, or that he was at least the central figure, and that therefore he was now nominally holding the reins of government. That is why reaction to the coup varied according to what one thought of Bonaparte, or conversely according to how much one detested the ousted regime that had been in power since the fall of Robespierre, the Directory. In Paris, Christine Reinhard talked of how the people were jubilant, and of how, even a week later, the enthusiasm for the new regime had not waned – ‘you would think that we had returned to the first days of liberty’.
4
Given that her husband was minister for foreign affairs, she may have portrayed things in a somewhat rosier light than they actually were. Paris, by other accounts, appears to have been relatively indifferent. A curious police report stated that the coup was met with ‘neither excitement nor enthusiasm’ (
ni l’exaltation ni l’enthousiasme
).
5
This was portrayed as a positive thing. ‘It is at the bottom of people’s hearts that this contentment resides.’

Paris was not France, and for the moment nothing was certain. The Brumairians, as the conspirators were called (named after the month of Brumaire in the revolutionary calendar, the month in which the coup took place), did not know how the rest of the country was going to react, and that included the army.
6
More than sixty generals had been involved in the coup,
7
but the troops belonged to the garrison of Paris, were personally loyal to Bonaparte and had been well prepared in advance. It was normal that they should publish a declaration of support in the newspaper the
Moniteur universel
, but reactions within the rest of the army were far from uniform.
8
General André Masséna, for example, at the head of about 35,000 demoralized troops in Italy, wrote that opinion was generally not favourable, while some divisions and a number of officers were openly opposed to it.
9
Officers in the Army of the North (based in Holland) expressed some reservations, as did the commanding general of Marseilles.
10
One cannot assume that because Bonaparte was a renowned general the army was completely swayed by him. On the contrary, the army was home to enough oppositional elements to make it a potentially dangerous institution.
11
Eventually, the officer corps was purged, but that would come later.
12

The reactions in the administration were mixed too. A number of local authorities took the initiative and sent messages of adherence to the new authorities – this was the case in the north and east of the country, that is, those areas under direct threat from invasion
13
– but at Toulouse there was talk of a Jacobin uprising. At Grenoble the National Guard refused to swear an oath of loyalty to the new regime. At Metz the commander of the town had to establish order by force and impose martial law in several surrounding areas. In 1789, the revolutionaries had divided France into eighty-nine departments. One week after the coup, the regime could count on the adhesion of only thirteen departments. The departmental administration of the Jura, for example, characterized Bonaparte as a ‘usurping tyrant’.
14

This is why, ten days after the coup, the consuls decided to send one delegate to each military division (there were twenty-six in all), to carry the ‘good news’ and to nip in the bud any signs of resistance to the changeover. The delegates, all officers, had far-reaching powers to suspend or replace public functionaries, to close political clubs and to post proclamations. Three weeks later, however, twenty departments had still not sent in congratulations. Even then, the letters received did little more than mirror the propaganda the new regime had already sent to the provinces. It has to be said, though, that most officials in the departments appear to have welcomed the coup, happier to be rid of the Directory than to see Bonaparte’s arrival on the political scene. Few were downright hostile.
15
Even those individuals who had opposed the coup eventually had to face the political reality and come round to the new regime.
16

In view of the rapid turnover of political personalities since 1789, many people did not expect the new regime to last very long. In the last ten years, there had been five governments – the National Assembly (1789), the National Constituent Assembly (1789–91), the Legislative Assembly (1791–2), the National Convention (1792–5) and the Directory (1795–9) – and the country had swung from absolute monarchy to a republic when the king, Louis XVI, was executed in 1793. After that, the Revolution lurched to the left as increasingly radical factions vied for power, culminating in the ascendancy within the Convention of a group known as the Jacobins and the formation of an executive, the Committee of Public Safety, dominated by one of the leading members of the Jacobins, Maximilien Robespierre.
17
During the reign of the Convention, more than 16,000 people were guillotined, another 25,000 were summarily executed by one means or another, and hundreds of thousands died as a result of a bloody civil war. This was the Terror, which was brought to an end only when Robespierre was overthrown in 1794, meeting the same fate as his victims. The Directory that ruled France from 1795 to 1799 did a reasonably good job in the face of war and civil unrest, but was characterized by corruption, scandal, an egregious flouting of the electoral system, and a parliamentary coup.