Read City of the Fallen Online

City of the Fallen 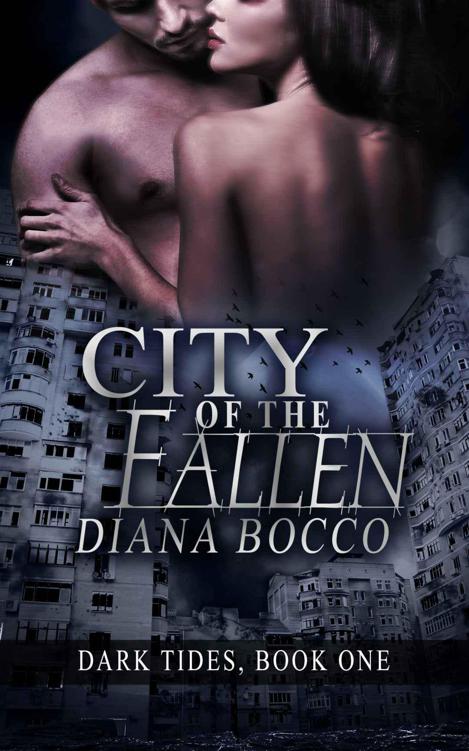 City of the Fallen

This book is a work of fiction. Names, characters, places, and incidents are all a product of the author’s imagination. Any resemblance to actual persons, living or dead, locales or events is entirely coincidental.

No part of this book may be reproduced, scanned, or distributed in any printed or electronic form.

Her last night of freedom.

Isabelle looked into the distance one more time before she closed the shutters and started securing the windows. The air was thick with moisture and a storm was brewing in the distance, making the darkening sky appear even more ominous and somber than usual.

Over the past few years she had grown used to the silence, to the disappearance of cars, music, children. Still, tonight everything seemed even more dreary than usual. Maybe because she knew it was her last night of hiding out in the shadows. Her last night of holding on to what it meant to be human.

The rest of the group was busy latching the windows, but she couldn’t tear herself away from the last bit of light scurrying in through the gap in the shutters. She pushed her face against the wood and took a deep breath, trying to sponge up the sunset into her lungs. The air smelled bare, just like it had for years now.

Two years ago, on her twenty-ninth birthday, she had promised herself she would die before letting one of the monsters touch her. Now, she was ready to walk into the darkness and offer herself to them.

The chances of her making it through the barren lands and into the compound were small. If she managed to get there before the sun went down and they woke up, maybe she had a chance. A small one, but a chance nonetheless.

Her body pulsated in fear and anticipation. She didn’t want to think about what was waiting for her when she finally made it there. Surviving the monsters outside only to become a slave and then try the impossible.

“I wish you would reconsider.”

She sighed before turning around to face her brother. Her baby brother, who had aged a decade since the invasion had begun five years ago and badly needed a shave.

She resisted the urge to hug him. “We’ve been over this before, Shawn. And you know as well as I do that there’s no other way.”

Shawn smiled softly. “We also know the chances of this working are very small.”

Isabelle looked towards the living room to the few faces hushed up in the darkness. The whole group had been hiding in the house for almost six months, and were as close as family now. Or as close as a family you could get after everything that had happened.

They had been in the house longer than in any of their previous hideouts. Partly because the house was in a semi-rural area, away from main roads and well hidden behind rows of trees and outbuildings. Unless somebody was looking closely, it was relatively easy to miss. Besides, the group was getting weaker. Gas was in short supply and they were now down to two vehicles that barely ran anymore. Moving on foot was almost impossible. With impromptu shelters so hard to find, they couldn’t risk getting caught on the roads when the sun went down.

When the invasion started, most people had run away with their families, hidden and tried to survive as best they could in the midst of the chaos that ensued. Slowly, however, most families had started to lose members. Children had been the first to go—too slow and too loud to avoid the monsters hunting in the dark. Then went the weak and the old. Without access to hospitals and medical care, it didn’t take much to knock you down. And once you were down, you were easy prey. To survive, the only choice was to run and hide, so the weak ones were left behind to be hunted down like animals.

There had been no warning, no sign of the coming apocalypse. The attackers had risen out of the darkness in a matter of days. How long they’d been around, planning an invasion, was anybody’s guess. But when they had decided to make their presence known, they had been ready for war. The world hadn’t been. The world population had quickly died by the hundreds of millions. The ones who survived, the people like her, had been hiding in holes and blacked-out houses for five years.

And it was time for a survivor to come out and play hero—even if it was a stupid idea.

She put her caramel hair up in a ponytail, thinking it had never been this long before. “We’re starving, Shawn. Half of the people here are sick and we’ve run out of places to scavenge. What else can we do?”

He cursed and then plopped down on a chair near the window. “I’ll take the first shift.”

She had given up on shifts a long time ago. If the monsters found the house and decided to attack, there was nothing her group could do. Shawn probably knew that too, but he insisted on organizing watch shifts throughout the night. She didn’t want to argue. This was her brother’s shot at holding on to hope and she didn’t want to take that away.

But deep down she knew an attack would be quick, merciless and fatal.

The monsters would win. The vampires.

The first sliver of sun was peeking in through the windows when she woke up, breathing hard. She’d been dreaming all night about the monsters and the horrors that awaited her. The screams still resonated in her ears, almost as real as the world around her.

She sat up on her mattress and took a few deep breaths, fighting against the wild booming in her chest. As her breathing started to calm down, she looked around, pausing on the mattress where Anna and Sofia were sound asleep, just a few feet away from her. At nineteen and twenty-one, the sisters were the youngest people she had seen in a very long time.

It all suddenly seemed hopeless. Even if she was able to get to the compound, what exactly was she hoping to accomplish? Was she really expecting to walk into the king’s room and stake him in the heart while the other vampires watched?

Right then and there, she decided she had to leave right now, without saying goodbye. The practical side of her was telling her it was best not to waste any daylight with hugs, tears and promises of “I’ll see you soon”. But the truth was more complicated than that. She simply didn’t want to lie. She didn’t want to promise Shawn that she’d see him soon. She didn’t want to deal with everybody’s last-minute requests for her to stay behind. She had decided a long time ago that humanity’s last hope was in killing the vampire king. And that she should be the one to try it.

It had been a fantasy at first. The kind of daydream you had when all hope was lost and you wanted to convince yourself you could still win. So she had dreamed, first during the day and then eventually every time she closed her eyes. Dreams of a new dawn, of a hopeful tomorrow. And of herself piercing the heart of the monster that ruled the vampire world. Somehow in the midst of all the dreams, she had convinced herself it was actually possible. And the dreams had become more of a strategic plan: how to get to him, how to gain his trust, how to kill him. As much as she hated the idea, the only way in was to become the one thing she hated more than vampires themselves: a pet.

The first couple of years had been easy for vampires. A plentiful supply of blood and a prey that was easy to hunt. But over time, more and more people had gone into hiding and soon vampires were having a difficult time finding food. So were humans. And so the concept of pets had been born. Those who were starving had the option of becoming pets. Either for a single vampire or—much worse—for a group of them. In exchange for providing blood, sex and entertainment, the person could get food and shelter. No more running, no more hiding.

Complete families had started surrendering in a desperate attempt to stay alive. It was hard to guess what had happened to them once they were gone from the cities and into the vampire compounds or areas. None were ever seen again. There were lots of rumors—vampires torturing children, vampires leaving humans to die once their blood supply became too low, women being passed around to a large group of vampires… It was hard to know what was true and what was a result of widespread panic. She knew vampires could turn humans if they wanted, but she doubted they ever did. Why bring a lowly human into their ranks? There were already enough of them (and too few humans) in the world.

She closed her eyes, took a deep breath to hold back the tears and then slowly got up. Robert was on window watch, the last of the day. Once the sun was up, the world was safe again—at least until the darkness returned.

He acknowledged her with a slight head nod when she entered the room.

“I’m going out for a bit,” she whispered and Robert nodded again.

On the way out, she grabbed her scavenging bag. It contained everything she needed—everything she owned—plus a change of clothes she’d stolen from Sofia. She needed to clean up before walking into the compound. The more attractive she looked, the better her chances of landing an important master. Somebody closer to the king.

She jumped into the car and started the engine on the first try. Before anybody had time to step outside, and before she had a chance to change her mind, she took off towards the highway and the plundered world ahead.

The wind was howling against her window as she drove away.

By five in the afternoon, the realization was sinking in: she had underestimated the distance to the compound.

Even driving at high speeds on an empty road, there would be no way she could make it there before sunset. But the roads weren’t exactly deserted anyway: skeletons of abandoned cars littered the highway. At times, she had to veer off the pavement to maneuver around them. They were a reminder of how fast and how devastating the invasion had been. Many had died right there, on the highway, as the vampires descended upon them with
annihilating
fury.

Her major concern was to make sure she didn’t get caught driving at night. The monsters would be out, hunting, and she would be the center of attention. Even worse: they would be able to hear her coming for miles. There were few cars left on the roads, in part because many had become
undrivable
, full of the remnants of civilization. But there was also the noise factor. Vampires could detect the quietest of cracks miles away, so an engine would act like a magnet, bringing them out of hiding and straight towards her. She’d heard they patrolled the roads for clues of survivors. And they were growing hungrier by the day—if one of them found her, she would become dinner right then and there.