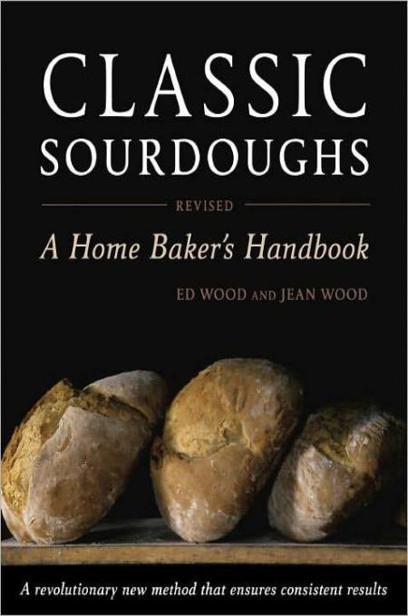 Copyright © 2011 by Ed Wood and The Estate of Jean Wood

All rights reserved.
Published in the United States by Ten Speed Press, an imprint of the Crown Publishing Group,
a division of Random House, Inc., New York.
www.crownpublishing.com
www.tenspeed.com

THIS BOOK IS
dedicated to Jean, the coauthor of this book. We met on the campus of Oregon State University in 1948. In the decades since, she has been my companion in every aspect of my life—the soul of my aspirations.

We married in Boston on June 12, 1950. She brought us three sons and two daughters. As we raised our family, we also shared a lifetime of adventures. We especially loved the outdoors, catching salmon together along the West Coast, hunting for game birds throughout the United States and Canada, and enjoying camping and exploration.

She shared my obsession with sourdough breads and together we searched the Middle East and Europe for the sourdough culture that produced man’s first leavened breads. Among ancient bakeries unearthed in Egypt, we discovered the culture that was used to feed the builders of the Giza pyramid.

Jean was loved by all who knew her. Her passion and conviction infuse the writing of this book. Shortly after its completion, she passed from us suddenly and without warning. In loving memory, I dedicate this book to her life and the vitality she brought to mine.

PEOPLE AROUND THE
world are again becoming fascinated by sourdoughs. We see evidence of this interest daily here at Sourdoughs International, where we grow, harvest, and dry cultures that we have collected from around the world (see
this page
for descriptions of the cultures in our collection, and the stories behind them). Orders for these cultures come from places as disparate as South Africa, Japan, Australia, and Norway.

Why the fascination? The simple answer is that, in many ways, sourdoughs improve the quality of our lives. They have a unique, inherent charisma, and they still produce the best bread the world has ever known. They are soul-satisfying and fun: we call them “endorphins of the kitchen.” They truly offer an extension of a personal quality beyond what we eat to what we do and what we are.

More than thirty years ago, we self-published
World Sourdoughs from Antiquity
. In 1996, it was revised and published by Ten Speed Press, which did a much better job with it than we did. In 2001, it was again revised and updated, this time under the title
Classic Sourdoughs: A Home Baker’s Handbook
. Ten years later, this new edition keeps the heart of the previous editions and adds many refinements in technique and one important new method, the culture proof, which is designed to bring your refrigerated sourdough culture to vibrant life before you begin to bake, ensuring the best structure and flavor in the finished loaf.

This way of baking has enriched our lives tremendously. The purpose of this book is the same as it has been for the last three decades: to share with you the pleasures of using sourdoughs in your own kitchen.

THIS BOOK WILL
introduce you to the personal satisfaction and sense of accomplishment experienced by home bakers of traditional sourdough. If you are an experienced sourdough baker, it will guide you to the sourdoughs you seek.

Let’s start by defining what we really mean by “traditional” sourdoughs. We know the sourdough process results from the fermentation reactions of two quite different classes of microorganisms: wild yeast and beneficial bacteria. For well over five thousand years, all breads were produced by the fermentation of these two essential microorganisms acting together. The yeasts are primarily responsible for leavening and bread texture, the bacteria for the sourdough flavor. Thus the definition of “traditional” sourdough requires a “culture,” or “starter,” containing both of these organisms.

Delicious, nutritious breads of various kinds were produced for centuries by a process no one understood. Bakers believed there was “something” in dough that made it rise. They knew if they saved some old dough and added it to a new batch, the new dough would also rise. For eons, all new doughs required a bit of old dough to “start” the rising process. In villages and towns around the world, bread was the staff of life—it literally supported life. People baked it in their homes, and every town had a bakery where the people could take their dough to be baked in the baker’s oven, or buy bread from the baker himself. When people emigrated to the United States, they brought their dough starters with them. The California forty-niners and the Yukon and Alaskan miners get credit for the term “sourdoughs,” probably due to the extreme flavor of their breads (the crusty miners themselves subsequently became known as “sourdoughs”). Thus our definition of “traditional” sourdough also requires a culture with organisms that, with proper care, will survive and replicate themselves forever.

In the 1800s, Louis Pasteur looked into a microscope and saw what we now call wild yeast, discovering for the first time what really made bread dough rise. Within the next hundred years, researchers learned how to select, isolate, and grow single strains of yeast in pure cultures. They searched for and found species of
Saccharomyces cerevisiae
, baker’s yeast, which leavened bread doughs with incredible speed.