CLOSE TO YOU: Enhanced (Lost Hearts) 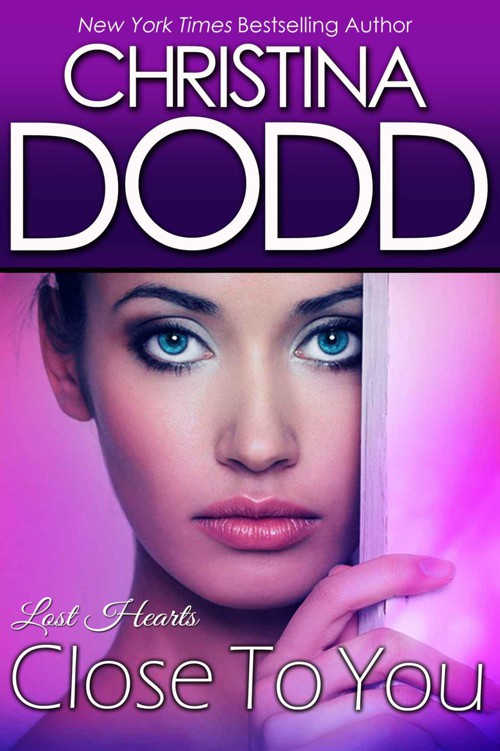 Marilyn Montgomery sat in the straight-backed chair in the office of the adoption agency and stared at the door. This was the moment she'd been waiting for all her married life. She was going to hold a baby—her own baby—in her arms at last.

Skeeter sat shoulder to shoulder with her. God bless him, the big, gruff redneck knew her better than anyone else. Through fourteen years of marriage and innumerable fertility tests, he had been the rock on which she leaned, always joking, kind, and ultimately the most loving man she'd ever met.

Now, knowing exactly how excited she was, he took her hand and squeezed it.

She tried to smile at him, but her lips were trembling too much. What if the baby didn't like her? What if she, Marilyn, didn't know what to do? So much depended on this moment. So much . . .

She'd found the adoption agency in a magazine, read the testimonials from parents who had been matched with the perfect child, sent letters to a few and received

back
glowing references. She'd filled out extensive questionnaires about her marriage to Skeeter (his real name was Stephen), their income (high), their educations (he'd graduated from Texas A&M, she from UT; Skeeter was a geologist for an oil company and she had a degree in psychology), and where they lived (in Indonesia, Saudi Arabia, Alaska, or wherever the oil company sent them).

Since this was a church-run adoption agency, she had been surprised there had been no questions about their religion. None of the other church agencies had been so easygoing. But perhaps this church was unusually tolerant—and really, she didn't care, because Pastor Wright had immediately called them with the happy news that he had found them a child. Not an infant, but that was all right. The photo showed a little girl, ten months old, with a faint wisp of hair across her scalp and wide, tearful blue eyes.

Best of all, Marilyn could take her right away. The church agency was satisfied with Skeeter and Marilyn's references. The baby had been left on a church doorstep with a note pinned to her shirt telling nothing more than her name. Pastor Wright wasn't worried that Skeeter and Marilyn were scheduled to leave the country next week on a job. Pastor Wright pronounced the Montgomerys to be a perfect match with that adorable little girl.

Soon Marilyn would see her baby.

But the clock on the wall ticked so . . . incredibly . . . slowly. The afternoon was growing late, and she was growing too warm and incredibly worried.

"It's okay, honey." Skeeter's normal sounding voice made Marilyn jump. "Pastor Wright said he'd be just a minute. He's going to get her from the nursery, and then we can have her. Take her home today and she's ours forever. After what we've been through with those other adoption agencies, that's a miracle, I'd say."

"Yes." Marilyn's ears strained to hear footsteps in the hall outside the closed door. Pastor Wright had explained the agency was in the process of moving into the small, previously empty strip mall; any sound had to be Pastor Wright. "He gave us all the paperwork, right? We have it, don't we?"

Skeeter patted his leather briefcase. "We've got her brand-new birth certificate right here, and copies of the adoption documents filed with the state of Texas."

"All right, then." Marilyn rubbed her damp palms on her trousers. "As long as they did a thorough search for the parents. Because I couldn't bear it if her natural parents came back and claimed her."

"Can't happen," Skeeter said easily. "What did he say her name was? Caitlin?"

He was making conversation, trying to ease Marilyn's tension, and she restrained her impulse to snap at him. "That's it."

"She isn't used to anything. She's only ten months old. Isn't she sort of like crude oil?"

This time, Marilyn managed a smile. "Like crude oil?"

"Yeah, a big gooey blob ready to be made into whatever we want?" He made a squishing motion with his hands.

"Skeeter, she's already got a personality. She's a person." Suspiciously, Marilyn asked, "Didn't you read any of the baby books I gave you?"

"Naw." He stretched out his long legs and gave her the slow, gentle grin that had stolen her heart so long ago at the UT/A&M football game. "I figured I'd pick up this father stuff as I go along. My dad did. I came out all right." He squeezed her hand again. "Didn't I?"

"Don't say 'damned.' " Marilyn never approved of his cursing, and now she had an excuse to stop it. "You can't swear anymore, Skeeter, or the baby will pick up your bad habits."

"She'll be sitting up, probably walking with help, maybe be able to say a few words." Marilyn's attention returned to the door. "Certainly she'll know her name!"

"Caitlin." Skeeter mulled it over. "It's kinda pretty."

"It is."
What was taking Pastor Wright so long to bring her here?

"Kate?" Marilyn turned to Skeeter in astonishment. "Why Kate?"

And she remembered his grandmother, the one she'd never met, had been named Kate. She remembered, too, that Skeeter wanted this baby as desperately as she did, and that he would be a wonderful father. "I guess that wouldn't confuse the baby too much."

They shared a smile.

Marilyn came to her feet.

Pastor Wright stood there, a man of thirty, tall, blond, and handsome, with striking blue eyes and a rugged profile. He was the kind of guy who could turn a woman's head.

Marilyn barely noticed him. All her attention was on the baby in the blue frilly dress in his arms. In Kate's picture, it hadn't been possible to see the fine grain of her skin—or the blotches caused by hours of crying. Her lower lip trembled, and her eyes filled with tears as she stared at them, more strangers in a life already torn asunder by abandonment.

At once Marilyn found herself engulfed in the scent of baby powder. Tiny hands closed around her neck and cheap diapers crackled on her arm.

"Mumumumum." The baby could talk.

She was calling Marilyn
Mum
, burying her head in Marilyn's neck and crying as if her heart was broken. As Marilyn cuddled the baby, she barely heard the men talking.

"Part of our policy is to give you a car seat and a diaper bag with the necessities." Pastor Wright looked annoyed, as if carrying the baby had been an ordeal.

"Don't need to worry about that." Skeeter accepted the diaper bag anyway. "Marilyn's brought everything little Kate will need."

"Kate?" For the first time, Pastor Wright looked interested. "Is that what you're going to call her?"

"Thought we would," Skeeter said laconically.

"Glad you approve." Skeeter steadily watched Pastor Wright. "You want us to sign any more papers? Papers saying we got little Kate? Papers saying we'll let someone come and check up on her?"

"No, no." Pastor Wright waved his hand. "We're satisfied with your references, and I'm a good judge of character. Caitlin—Kate—will be fine with you. I'll walk you out." He shepherded them out and down the echoing hallway.

With both arms wrapped around her precious bundle, Marilyn walked toward the lobby. The baby stopped crying and rested her head on Marilyn's shoulder. Marilyn rubbed her cheek on the soft little head.

"I never asked," Skeeter said. "What kind of minister are you?"

"Congregational." For what seemed like the dozenth time, Pastor Wright asked, "You're going to take Kate out of the country next week?"

"If that's okay with you," Skeeter drawled.

Skeeter's hostile tone pierced Marilyn's contentment. She was surprised, and she was alarmed. What was wrong with Skeeter? He wasn't going to ruin everything now, was he? She was already in love with this baby. She
had
to keep this baby. She rushed into speech. "We'll take the best care of her. I promise we won't take her anyplace dangerous or ever let her be harmed."

"That's good. I'm glad to hear it." Pastor Wright led them through the lobby and opened the door. The humid heat of a Texas summer rolled in to surround them. He shook hands with Skeeter, then looked at his watch. "Glad we could get this done. I'm running late for another appointment, so . . ."

"Of course." Marilyn watched as he disappeared down the empty hallway, and, in mild surprise, she complained, "He didn't even say good-bye to the baby."

"He doesn't seem to like children much." Skeeter gently slid his finger along little Kate's plump cheek. "Funny sort of a job for him, being a minister and heading up an adoption agency." Then he hurried ahead and opened the car door.

They'd parked in the shade and covered the baby seat with a blanket, but even so it was hot in the confined space, and little Kate gave a wail when Marilyn strapped her in. Marilyn could hardly stand it. In a pleading tone, she asked, "Do you suppose I could hold her in my lap just this once . . . ?"

"Nope. You know it's not safe." Skeeter opened Marilyn's door, took her arm, and helped her inside. "It's not far to home. She'll be okay." He hurried to the driver's side and started the engine.

As he backed out, the air-conditioning kicked in, the baby stopped crying, and Marilyn relaxed. Relaxed long enough to think about the way Skeeter had acted back there. Hostile and questioning, as if he didn't like what was happening. "What were you doing, talking to Pastor Wright like that?" She glared at him. "What's wrong with you?"

Skeeter didn't answer. He drove and stared straight ahead, his usually benign mouth a grim line.

Something was really wrong. "Stephen, what's wrong? Tell me. Is there something not right with Kate? Did you want a son?" In dread, she asked the question she most feared, "Have you changed your mind?"

"What? No! No, it's not that." He glanced at her and gave an unhappy shrug. "That building didn't look like any adoption agency was moving in. Pastor Wright doesn't like children. I don't know, honey bunch. I've got a bad feeling about this. That adoption seemed just a little too damned easy."

At twenty-four years of age, Kate Montgomery knew that a minimal hurricane packed winds of at least seventy-four miles per hour.

She knew that the clouds could put down five inches of rain an hour, generate dangerous lightning, and spin off violent tornadoes.

Most of all, she knew that a hurricane's greatest damage and loss of life came from the storm surge, a buildup of the seas that swept away homes, roads, and people who were stupid enough to think that a mere category one hurricane posed no threat and stayed in its path.

Which is why, as she waded into the surf at Galveston and turned to face the television camera, she felt like the biggest fool in Texas.

Publish and Be Murdered by Ruth Dudley Edwards
And Thereby Hangs a Tale by Jeffrey Archer
Filthy Beautiful Lies (Filthy Beautiful Lies #1) by Kendall Ryan
Bubba and the Dead Woman by Bevill, C.L.
The Deer Prince's Murder: Book Two of 'Fantasy & Forensics' (Fantasy & Forensics 2) by Michael Angel
Contaminated by Em Garner
Revelations (The Elysium Chronicles) by Souders, J. A.
The Corpse on the Court by Simon Brett
Blitz (Emerald City/Black Family Saga Book 1) by Scully, Felicia X.
A Plea for Eros by Siri Hustvedt
Our partner