Read Closer to My Heart Online

Closer to My Heart 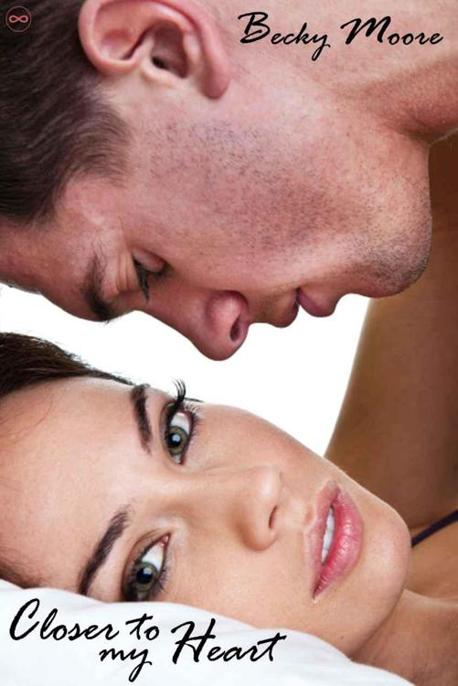 This book is a work of fiction.
Names, characters, places, and incidents
are either products of the author's imagination
or are used fictitiously.

Originally published May 2011
by XOXO Publishing as
The Right Words
.

All rights reserved, including the right to reproduce
this book or portions thereof in any form whatsoever

Closer to My Heart, by Becky Moore

Jane Porter’s life is all about fiction, but when it comes to dealing with her inconsiderate upstairs tenant, she’s all business. The cuffs are off when her noisy neighbor jolts her out of a sound sleep with a cacophony of banging thuds and her erstwhile favorite workout musicians, the Ramones.

Imagine her surprise to find the offending party is not her flighty neighbor, Amber … but a sizzling, melt-your-panties Adonis, Lucas Moore. Discouraged when a recurrent nightmare drives Lucas from another sleepless night, he figures a hard run is the perfect physical distraction to help him get back to sleep.

But half an hour into his groove, pounding on the door stops him in his tracks. Who knew opening it would change the course of his life. Yet, one look at the breath-taking woman demanding entrance put his whole body on alert—and a serious strain on his self-imposed celibacy.

Can a dangerous, ex-government agent and a friendly, outgoing writer have anything in common other than combustible physical attraction? And when the flames of passion are banked, can Lucas and Jane trust the tentative bond they’re building beyond the bedroom? Sometimes, the right words can make all the difference in the world.

For Matt, who always makes my heart beat
a little faster, even after all these years.

Jane Porter squeezed her goose down pillow tighter around her head to try and block out the incessant pounding and blaring tunes of The Clash coming from the efficiency apartment in her attic. She’d only gotten into bed two hours ago and, until the cacophony of sounds started, she was enjoying the blissful after-effects of her migraine medicine kicking in. Three songs in, however, the pain was beating out the remedy.

Oh, God. She flipped onto her stomach, groaning, and resettled the pillow to try and drown out the sounds.
I deserve a medal
, she thought. Maintaining her fledgling camaraderie with her flighty neighbor, Amber Taylor, was going to kill her…or cause her brain to melt down. Even on good, migraine-free days, it was difficult at best to get along with that Barbie-bimbo—a self-centered, high maintenance, whiner of a slut who thought the world revolved around her and that any male within sight or scent of her should fall to their knees to worship her greatness. Jane snorted at the picture that popped into her mind of Amber standing spread-eagled at the front of the kindergarten class she taught, with one of the dads sitting on his knees going down on her, and the shocked expressions on the kids’ faces. Eww.

She groaned again, irritated that she was letting the pain drown out her patience. Jane found it was best to not dwell on how much she hated Amber; it made it easier to live with her.

But the pounding music was making her rethink her decision to open her home to a roommate. It was getting harder and harder to remind herself that she wanted the hustle and bustle of another living soul in the house with her.

When her grandmother died last Christmas and left the old brick mansion to her, Jane had been more than happy to leave Manhattan for Durham. Her work as a travel journalist kept her on the move, and for the last six years had lived out of a series of suitcases, hotels and friends houses. Hence, the thought that a roommate would be “fun”. Gah!

The old homestead was nestled deep within the historic Forest Hills area of town. It was a gorgeous Georgian-style mansion, with nearly 6,000 square feet. It was big and stately. And quiet.
And lonely.

By Easter the silence had begun to make Jane crazy, so she’d taken a three month assignment in Costa Rica. While she was gone, contractors had segmented the third floor into an efficiency apartment—though it was larger than any apartment she’d ever had in Manhattan or Paris—and put an addition off the kitchen for her art studio and kiln. Now it was just right. And it was home.

A realtor had introduced her to Amber, who was in her first year of teaching. Amber was young and quiet, cute, and seemed like the perfect tenant. Apparently, Amber was living on her own for the first time in her life, and while she was quiet and demure in the classroom, her crotch was a revolving door for anyone so inclined on the weekend. Crap, she’d even give Miss Kitty a run for her money.

They were four months into a six-month lease, and the only thing keeping Jane from kicking Amber out on her ass was the lease they’d both signed. Legal and binding, damn it. Fucking Amber!

Jane glared at the ceiling, willing the noise in the attic to stop. But it was no use. The pounding went on and on. God, she had to get some sleep. With a muttered curse, Jane pulled the phone onto the bed and called Amber to pick up. Of course voicemail picked up.

“Amber … it’s Jane. I’m not sure what you’re doing up there, but you’ve got to stop. It sounds like you’re running with a herd of elephants. I was up late last night with a deadline and I’ve only been in bed for two hours. Please give me another couple of hours with some peace and quiet and I’ll go over to Duke Forest with you and run. I’ll even treat us to lunch afterward.”

She sighed and hung up and then went to the bathroom while she was up. The motion made her stomach lurch, so she sat on the toilet until she was able to stagger back to bed without vomiting all over the bedroom.

“Shit.” She was going to have to go up there.

She was all the way at the attic landing outside Amber’s door, knocking with the flat of her hand, when she realized she was in her summer jammies. The only thing covering her little bikini panties was an old threadbare T-shirt with ‘Rough Riders’ emblazoned in pink rhinestones across the chest. She groaned and let her head drop back on her shoulders.
Great
.

Staring at the ceiling, she reached out to knock again—but instead of the solid door, her hand met solid, unyielding flesh.
Crap!

She sucked in a quick breath, jerked her head up and came face to face with a tanned Adam’s apple. Ooh, and little dribbles of sweat trickled down it.

“Noooo,” she wailed. Then with a
thud
she dropped her forehead to rest in the solid notch between two very fine pectoral muscles. Neither she nor Mr. Pecs said a word.

“Uh, ma’am, are you okay?” He tapped her shoulder with his fingertips, and cupped the small, toned curve of her shoulder. “Honey, come on. How can I help you?” He moved his hand over her warm skin, making contact with wispy, butterfly touches. Goosebumps trickled in the wake of his big hand.

He tucked his chin and looked down at this small, curvy woman plastered against his body. Ah, man, she fit him perfectly.
Whoa
—he stilled at the thought. He looked down at her again and realized that she was naked. Well, mostly naked. His eyes trailed up the length of her long, toned legs. They were beautifully shaped and lightly tanned. Blood was pooling low in his groin; he could feel it rushing in his ears from his head down to his stiffening dick. He wanted to run his tongue along the shadowed groove of the long, curved muscle of her quadriceps. God, he wanted to spin her around and pin her to the door, and grind against her. It’d been so long since he’d been with a woman.