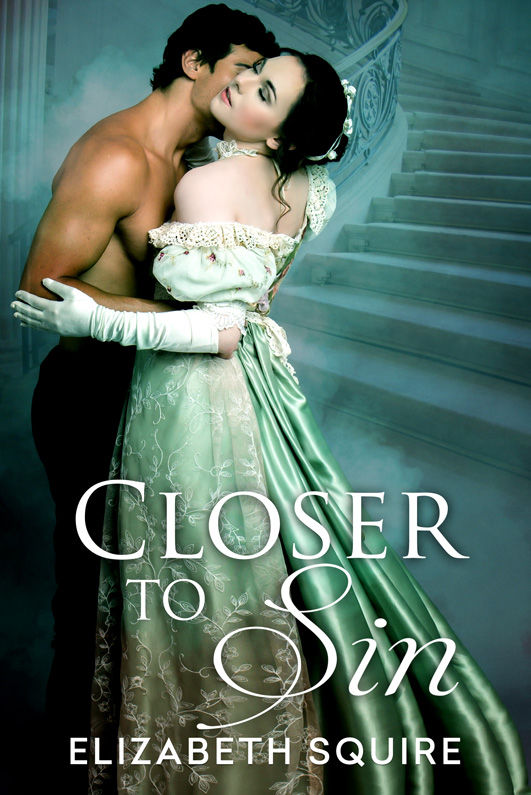 Elizabeth Squire brings a fresh voice to historical romance in this tale of intrigue and passion.

Liliane Desailly travels to Napoleonic France after receiving a plea for help from her French cousin. She learns she is the key to fulfilling her grandfather’s legacy, but to do so she must masquerade as a spy and courier secrets on behalf of the British Admiralty.

Sinclair Charlcroft is the British Admiralty’s last hope. Napoleon’s Grande Armée is poised to invade Britain, an English spy is missing and a traitor has infiltrated the Admiralty’s intelligence network.

Elizabeth’s love of writing romance couldn’t be further from the life she had carved out for herself. Raised in outback and rural Australia, Elizabeth was determined to live a life vibrant with passion, travel, adventure and discovery. And so she invested a lot of years doing just that; she counts serving as a commissioned officer in the Royal Australian Navy, travelling by safari truck through Africa and back-packing through Eastern Europe with her young family as just a few of her achievements. But in the ensuing years, the urge to write intensified as story lines and dialogue continued to materialise from the recesses of her mind. She finally accepted that the voices in her head were really characters enmeshed in the tumultuous Georgian and Regency periods, vying for life on paper. After a nomadic lifestyle, Elizabeth has now settled into her own home and lives surrounded by the nation’s treasures, her own hero and one true love, two beautiful daughters and two delinquent miniature long-hair dachshunds.

I may have begun this journey alone, but I crossed the finish line surrounded by some of the most amazing and supportive people I could have ever hoped to enter my life.

I cannot let this moment go by without expressing my sincerest gratitude to:

Kate Cuthbert and Escape Publishing for making my dream a reality, and my editor Julie Wicks for helping me to paint that dream in technicolour.

Delwyn Jenkins, for being brave enough to read my early drafts and honest enough to give me the feedback I needed, for your unstinting encouragement and, lastly, for your enduring friendship.

The ladies of Canberra Romance Writers Group, for your friendship, laughter and endless support.

Romance Writers of Australia, for giving me the means to dream big.

Of course, none of this could have been possible without the love and unfailing belief that my family have for me. Roland, Simone and Savannah – thank you for letting me live my dream. And lastly, my mum, Glenda, who has never doubted me.

Liliane Desailly hugged her borrowed oilskins closer as icy wind peppered her face with sprays of salt water, leaving a dry, crusty film upon her skin. The fishing ketch began to bob and slosh about and she reluctantly acknowledged that the afternoon sun was now obscured by menacing black clouds. She cast her eye towards the horizon—at some stage in the past hour the hue of the water in the Channel had darkened to a deep grey.

Trying to ignore the sour taste flooding her mouth and the pounding of her heart, she watched Captain Joe direct his crew to shorten the mainsail, square away rigging and make preparations for the changing weather conditions. It was probably too late to pray they’d make landfall soon.

‘You’re lookin’ a mite peaked, there miss,’ Captain Joe called to her. ‘But don’t you worry none. T’is nothin’ but an early spring squall. Aye, there’ll be rain, but you just stay under that awning forward of the wheelhouse. Ye’ll be dry enough there. I’ll still be havin’ you in France well before sun-up. See if I don’t.’

Liliane cast him a dubious look; he wasn’t the one whose stomach felt like it was turning somersaults. Resolutely she wiped at the thin sheen of perspiration on her brow. Perhaps life on the high seas wasn’t for her, but then, a storm hadn’t been foreseen when she’d bribed Captain Joe to depart Folkestone on the morning’s tide.

Heeding the skipper’s instruction, she moved back under the awning and sunk down to sit upon the sea chest lashed to the bulkhead. At least it was a little drier here. Shuffling back further until she was comfortably propped up against the wheelhouse, Liliane burrowed a hand beneath her oilskins until she found the pocket built into her gown. She clasped hold of the small packet of crumpled letters—a half dozen thin pieces of paper, one for each of the past six months—each sounding more desperate than the last.

Mindful of the wind, she daren’t drag them out. Regardless, they were committed to memory. Solange’s words burnt through the parchment, none more so than the entreaty that she come to France with the utmost urgency. But tell no one. She shivered at those last words, bit back the metallic taste they evoked. But equally perplexing was Solange’s insistence that Liliane bring Papa’s watch with her. She lifted the heavy fob chain from about her neck, withdrawing the watch from where it lay between the sanctuary of her breasts. Slipping it from its waterproof pouch she reverently rubbed her thumb across the cover; she’d examined it countless times, the heavy gold was worn smooth with the passage of time but other than its value it was quite nondescript.

A lump caught in her throat as she remembered how Yvette had given it to him when she’d come to live with them. Liliane couldn’t remember a morning since that day, when Papa had still been alive, where he hadn’t sat at the breakfast table winding the mechanism and adjusting the time. The familiarity of its weight was now a comfort against the turmoil around her.

Another large wave crashed across the bow and foam sprayed over her. She shivered as she absently laid the watch in her lap and adjusted her scarf so it was tucked more securely into her oilskins. As she did so, a vague noise pulled her attention beyond the stern of boat.
What was that?
Peering out from the canvas awning that was doing so little to keep her dry, she made out a mass of odd shapes and dark shadows. In the distance, carried on the crest of the wind, a bell could be heard.

Before her, the deck of the fishing smack became frantic with activity. ‘Look lively lads,’ Captain Joe was ordering in a harsh voice. ‘Cast the fishing nets, look busy now. And no talking, we don’t know if ‘ems Frenchies or some of ours. And I don’t intend to find out.’

Looking to Liliane he called, ‘Just you stay down. We’re about to land ourselves in the middle of a naval patrol. Let’s hope they’re Georgie’s ships o’ the line. Might be Frenchies though. We’re a way off o’ our fishin’ grounds, but sometimes th’ herring run this far.’ Captain Joe moved on to give further directions to his crew.

What did he just say?
Liliane struggled to decipher his words.
A naval patrol? Oh dear Lord, not now.
A tremor of fear snaked down her spine. She’d come too far to be caught now. Surely the ship’s captain wouldn’t be interested in an inconsequential little fishing boat. Particularly on a night like this.

At least there was little likelihood that it was a French patrol; particularly as Cornwallis controlled the Channel. Well, that was the case last week when she’d spent an enlightening dinner hour listening to her uncle and his guests debate the Admiral’s tactics to engage in a close blockade of the English Channel.

She now shivered at the memory. Alarming reports continued to circulate that Napoleon’s Grande Armée was preparing to invade England. Cornwallis’s success in confining Napoleon’s fleet to harbour was paramount to Britain’s freedom. It would also ensure she arrived safely in France tomorrow morning.

‘Brace yourselves lads—’ Captain Joe’s warning cut through the whistle of the wind. Liliane looked up.
Oh good grief.
A wall of foaming green water loomed before them. Her throat constricted, and she grasped hold of the awning and held tight as the wave broke over the bow of the ketch. The whole boat lifted under the force of the onslaught and turned broadside to the next wave.

Behind her, Liliane could hear Captain Joe yelling instructions to the helmsman, entreating him to straighten the rudder and set the boat about. Liliane heard herself whimper.
So much for bravery
.

She closed her eyes, only to snap them open again, dizzy and disorientated, the whole world tilting on its axis as the boat righted its course and slid drunkenly down the side of the next wave. The momentum pitched Liliane against the side of the awning, dislodging her from her seat upon the sea trunk.

As she hit the deck, a heavy
thunk
followed by a metallic slide penetrated her dazed senses. She lurched forward, clawing the deck fruitlessly. Her throat constricted as with ever increasing horror she watched her father’s timepiece slide under the canvas and away from view.

Disbelief gave way to panic. She couldn’t lose Papa’s watch. Tightly clutching her oversized oilskins, she pushed her windswept hair back from her eyes and left the dubious protection of the shelter. A look back towards the quarterdeck assured her Captain Joe was otherwise engaged.

She lunged for the port-side rail and propelled herself toward it. ‘Eeew, sea foam,’ she cursed as she skidded, her arms flailing. The revolting stuff was everywhere. She regained her balance, wiped the spray from her face and looked about.

Oh, thank the fates
. The fob-watch lay against the gunwale, caught in the drainage channel. It was not lost to her, yet.

Another large wave smacked against the side. Water surged forward and engulfed her in an icy torrent, robbing her of breath and dissolving her precarious hold on the barrier. With little regard for her plight, the surge of water dislodged the watch and catapulted it further towards the bow.

The boat listed to the right and Liliane flailed desperately for the railing, the world racing past as they again careened haphazardly into the trough of another wave.

The violent movement pitched her to her backside and sent her sliding along the deck, unable to grasp at anything to arrest her forward trajectory. Images of being swept into the churning ocean assailed her until she came to a jarring halt against a hatch on the forward deck. Pain radiated up her spine with blinding fury, knocking the frozen air from her lungs.

Gingerly she reached a shaky hand for the railing and pulled herself to her knees. ‘Oh, heavens above,’ she whimpered as her hip threatened to buckle in protest.

Ahead she spied the watch lying in a pool of water. Hesitantly she balanced herself on her hands and knees, and slowly crawled her way further towards the ship’s prow. Each movement sent blades of pain lancing down her side. Digging her nails into the wooden deck she pressed forward until the watch was mere inches from her. Grasping the precious timepiece, she turned it over in her hands, examining it carefully.

A Clear and Present Danger by Buck Sanders
The Dragon of Avalon by T. A. Barron
Honeymoon To Die For by Dianna Love
Jaguar Night by Doranna Durgin
The Perfect Murder by Brenda Novak
Napoleon's Roads by David Brooks
Exit Light by Megan Hart
Bacterial Vaginosis Relief by William Gray
Undeniable by Liz Bankes
The Bronze Blade: An Elemental World Novella by Hunter, Elizabeth
Our partner