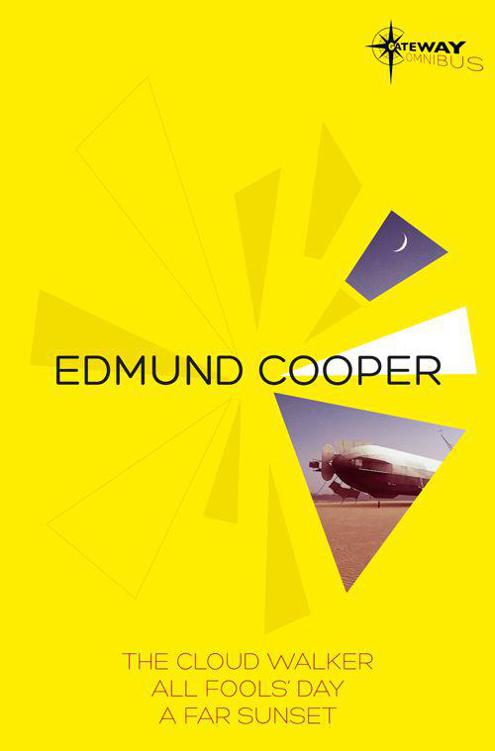 THE CLOUD WALKER
ALL FOOLS’ DAY
A FAR SUNSET

Introduction from The Encyclopedia of Science Fiction

The Civilizations of the First and Second Man have been destroyed by the products of their own technology. Now the world is emerging from a new dark age into the dawn of a second Middle Ages. Britain is dominated by a Luddite Church and by the doctrine that all machines are evil. Into this strange world comes Kieron, an artist’s apprentice who is inflamed by a forbidden dream – to construct a flying machine which will enable man to soar through the air like a bird.

Summer 1971. A marvellous spell of weather, idyllic in its warmth. But new sun-spots had appeared; and with their appearance came a significant increase in the suicide rate. The wonderful summer continued for a decade: simultaneously Radiant Suicide reached endemic proportions, the only people to escape its effects being the supposed transnormals, the obsessionals, the eccentrics and the psychopaths. These were to be the only remnants of the ancient ‘homo sapiens’ …

The year is
AD
2032 The
Gloria Mundi
, a starship built and manned by the new United States of Europe, touches down on the planet, Alatair Five. Disaster strikes, leaving only one apparent survivor – an Englishman named Paul Marlow, whose adventures in the lair of the strange primeval race known as the Bayani leads him firstly to their God, the omnipotent and omniscient Oruri, and eventually to an unlimited power that is so great it must include an in-built death sentence …

INTRODUCTION
from The Encyclopedia of Science Fiction

Edmund Cooper (1926–1982) was a UK editor and author who served in the British Merchant Navy 1944–1945. His literary career began soon after; he edited
Review Fifty
(three issues, Winter 1950–Spring 1951), contributing poems, fiction and nonfiction to that journal, and began to publish stories of genre interest with ‘The Unicorn’ for
Everybody’s
in 1951. He produced a considerable amount of short fiction in the 1950s, much of it assembled (with considerable overlap) in his first three collections:
Tomorrow’s Gift
(1958),
Voices in the Dark
(1960) and
Tomorrow Came
(1963). Most of his short work came early, perhaps his best known story being ‘Invisible Boy’ (23 June 1956
Saturday Evening Post
), which was the basis of the film
The Invisible Boy
(1957). For longer works, Cooper’s early pseudonyms included George Kinley, under which name he published his first sf novel,
Ferry Rocket
(1954), which speculated about Space Flight in near space; Martin Lester, the name he used for
The Black Phoenix
(1954), in which a Nazi cabal attempts to destabilize the Western world; and Broderick Quain. For the later Expendables sf adventure series, beginning with
The Deathworms of Kratos
(1975), he wrote as Richard Avery – the protagonist of an earlier novel under his own name,
Transit
(1964). From 1967 until his death, he was an influential reviewer of sf for
The Sunday Times
in London.

It was as a novelist, however, that Cooper was most highly regarded. Though it was for his earlier novels that he was most appreciated, the quality of his work held up until
Prisoner of Fire
(1974); his last novel,
Merry Christmas, Ms Minerva!
(1978), a Near Future tale set in a Britain dominated by trade unions, seemed less generous than his earlier speculations about the condition of the land. His first novels were clearly conceived within sf frames, but from the very first tended to focus in Satirical terms on the Near Future. His first novel under his own name,
Deadly Image
(1958; published as
The Uncertain Midnight
in the UK), vividly describes a post-holocaust world in which Androids are gradually threatening to supplant humankind; Cooper’s vision of humanity, here and elsewhere, is acid-edged, as is his abiding sense (typical of the satirical mind) that we are all too capable of creating monsters in the name of Utopia; its bleak depiction of this android-threatened world hints at an underlying lack of trust in progress, a distrust of the new technophilic post-War milieu that – though increasingly acceptable for later
readers – helps explain his lack of a wide and faithful readership. Several years later, in
The Overman Culture
(1971), he reversed field, with the androids seen as morally exemplary. Other tales with a refreshing sharp bite include
All Fools’ Day
(1966) (see below),
The Last Continent
(1969),
The Tenth Planet
(1973) and
The Cloud Walker
(1973) (see below). These works incorporate, more or less fully, a basic premise that the planet has been rendered to a greater or lesser degree uninhabitable; a condition for which we must almost certainly take the blame.

Several of his better novels are set off-Earth, and tend to be more sanguine.
Seed of Light
(1959) is a relatively weak Generation-Starship tale in which a small group manages to escape from a devastated Earth. Stronger examples include
Transit
(1964) and
Sea-Horse in the Sky
(1969), in both of which Aliens conduct experiments on humans sequestered on strange planets. The best of these books is almost certainly
A Far Sunset
(1967) (see below).

There can be no real doubt that Cooper’s later work struggles against a sense that the world was not improving, and that the inmates were running the asylum. This sense, that somehow we did not prosper from the experience of World War Two, is not surprising in an author who came to manhood in England of the late 1940s, and whose constant return to the theme of nuclear war amplifies the anxieties of his generation. Though some critics, who accused him of being anti-Feminist, may have taken his satirical thrusts too literally, it remains the case that his statement about women in a man’s world – ‘Let them compete against men, they’ll see that they can’t make it’ – was perhaps injudicious in lacking a level playing field to test the hypothesis. A persistent edginess about women in power becomes explicit in
Five to Twelve
(1968) and
Who Needs Men?
(1972); but it would not be wise to suggest that this edginess did not also apply to men: there are no well-run worlds in Cooper’s universe. In his last successful novel,
Prisoners of Fire
(1974), a group of people endowed with Psi Powers focus their energies on the assassination of the British political elite; who seem to deserve this comeuppance. Cooper died with his reputation at an unfairly low ebb; he was a competent and prolific author who amply rewards his readers, and deserves to gain more.

The three novels here selected argue strongly for Cooper’s rejuvenation as a significant voice in British sf, as one of the relatively small cadre of authors who bore World War Two, and its aftermath, in their bones.
The Cloud Walker
may be his most successful work, and was so received on publication. Two nuclear Holocausts have transformed England into a medievalized Ruined Earth, but the Luddite response of a new church – Cooper was consistently acidulous about organized Religion – is stupefyingly oppressive, and the young protagonist properly wins the day with an Invention which he uses to defend his village from assailants. This invention allows him to fly. The march of history resumes; progress is possible. In
All Fools’ Day
,
Homo
sapiens
is murderously unbalanced by a change in solar radiation; the Near Future setting is rendered in vividly grim terms, and conveys as clearly as anything he wrote the characteristic Cooperian sense that given a chance we will fail in our duty to ourselves, our homes, our country, our world. The third novel here presented,
A Far Sunset
(1967), represents a welcome escape from the planet where we have behaved so badly. The protagonist has been stranded on a strange though seemingly Earthlike planet, where he is captured by Aliens, who demonstrate to him the narrowness of his human obsession with the benefits of Technology. These three novels are lessons in human nature. They are sharp-tongued, but winnowed with wit, and a love of story-telling. They are discoveries we should make.