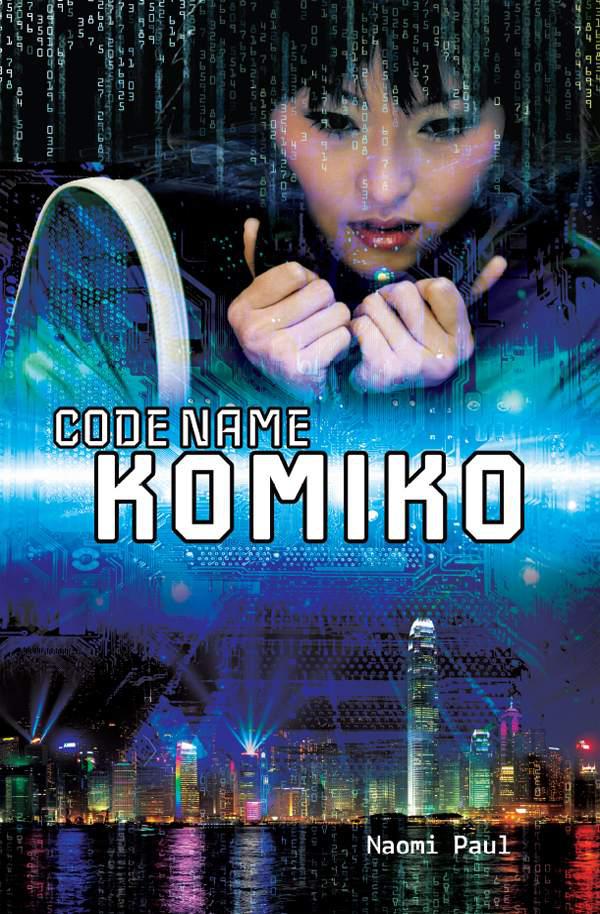 The first detail Lian noticed was the saccharine Sanrio pink fingernail polish. Then her eyes focused and she saw that the corpse's left forearm was pinned between two rocks, mooring the body in the shallow water. The hand was small and feminine, slightly bloated, and an ugly goose-pimpled blue-gray hue. Against it, the nail polish stood out in sharp relief.

Lian stayed focused on that bright pink as she made her way down to the rocks at the water's edge, stumbling and skidding a little on the patchy terrain. She dimly heard Mingmei's voice behind her, calling out for Lian not to get too close.

On the surface, sixteen-year-old Lian is a serious student and dutiful daughter, destined for a fine career as a concert violinist. But Lian has a secret identity. She is part of 06/04—a band of cyber-investigators who work to expose injustice and corruption. In this virtual world, Lian goes by the code name "Komiko."

Lian has no trouble keeping her daily life separate from her secret one—until a dead body washes up in Big Wave Bay. Lian investigates, with help from 06/04. Soon, she meets Matt Harrison, the new kid at her school. She learns that Matt's dad, Rand Harrison, is a corporate goon, whose clothing company exploits its workforce. And she finds a connection between the dead girl and Mr. Harrison. Lian and the 06/04 team are thrust into their most dangerous investigation ever—and Lian will learn that no one is ever quite who they seem to be . . .

Naomi Paul is a pseudonym for an American writer who lives in Texas.

Note to Our Readers

With special thanks to Dave Justus

“The Dragon’s Back is broken,” Lian repeated, marveling at the poetry of the phrase.

“Seriously, you’re being a weirdo,” Mingmei said, rolling her eyes. “That’s not even what he said, Lian.”

True, that hadn’t been exactly what the lifeguard had told them. He’d just said that the section of the Dragon’s Back hiking trail adjacent to Big Wave Bay Beach was temporarily closed. It was no big deal; the girls hadn’t come here to hike anyway but to bask in the late August sun on the last day before school started again. The mythological image had taken root in Lian’s mind as they’d trekked across the white sands to stake out their tanning spot, though, and, as always, she found it hard to shake a good mythological image.

“You knew I was a weirdo when you signed on for this friendship,” Lian said with a smile, smearing a big dollop of zinc oxide onto her nose. “Besides, who’s around to hear me embarrass you?”

Mingmei lowered her sunglasses and shot her friend a withering look. “
Everyone
,” she said, gesturing to the crowded beach on either side of them. “Everyone’s always around to hear everything.
Especially
when you’re being a weirdo.”

Lian laughed. Mingmei wasn’t far wrong. Hong Kong had a population density so high that there were barely six inches between Lian’s towel and that of the fat guy to her right. She kept her back to him and his snoring and watched Mingmei checking out the university boys emerging from the water, surfboards under their arms.

Now it was Lian’s turn to roll her eyes. “Well, it’ll be nice to get rid of
that
burden at last.”

“Sorry,” Mingmei said. “I forgot who I was talking to for a second. I promise you, Lian, we’ll find you a boyfriend by October so you can be sick of him by Christmas.”

Mingmei shrugged. “I’m a pretty ambitious girl. Of course, we’ll have to find a guy who’s willing to overlook that gigantic hickey that Zheng gave you.”

“Very funny,” Lian said sarcastically, but her hand went self-consciously to her neck—to the pink welt where her violin nestled against her for two hours each day. Mingmei liked to joke about the “intense love affair” between Lian and her instrument. She’d nicknamed the violin after its maker, master Zheng Quan, and teased Lian about the “beautiful music” the two made when they were alone.

Lian didn’t mind the jokes. Mingmei’s relationships—if you could call afternoons spent watching a boy chase a ball around the park with his friends a “relationship”—tended to last a matter of weeks, so how could she understand the lifetime of dedication Lian had given to her violin, or the joy she felt when she drew a flawless performance from its strings? Lian had her doubts that any first kiss could rival the highs of Bartók’s sonata.

Which is not to say that she wasn’t a little curious.

“Not to mention,” Mingmei said, catching Lian gently by the wrist, “all these calluses. Nobody wants to hold hands with a rock monster. You’ve
got
to ease up on the violin and spend a little time moisturizing.”

“Hey,” Lian said, pulling back her hand as Mingmei laughed. “These aren’t
all
from violin practice, you know.”

Mingmei did a double take. “Really?”

“Yeah. Some of them are from typing.”

Now both girls were laughing. Lian felt easy and free today, set loose from her responsibilities for a few hours before family and school obligations came crashing down on her head once again. She wished she had more opportunities to hang out with Mingmei like this, just soaking in the sun, sights, and sounds of the Southern District.

She wanted to make the most of them now, while she could. Their final year of high school, with all its attendant exam prep and school activities, would make it hard for them to get together as much in the months to come. This year they shared only a single economics class, the rest of their time being spent pursuing their individual interests—biology for Mingmei, arts and music for Lian.

Not to mention another extracurricular pursuit that Mingmei knew nothing about.

“It’s going to be strange, not sitting next to you for half the day,” Lian said. “We’ll have to spend the whole lunch period catching each other up on our mornings. There’ll hardly be time to eat.”

“Suits me fine,” Mingmei said. “I’ve been looking for excuses to skip a meal or two, anyway. I just can’t shake these last few pounds.”

“Oh, shut up!” Lian scooped up a glittering handful of sand and tossed it playfully at her friend. Those “last few pounds” were nowhere that Lian could see; Mingmei could have been clipped right out of
Teen Vogue, Cosmo
, or any one of the beach magazines being read all around them.

“I am dead serious,” Mingmei said, in a tone that was far from it. “Since that stuck-up Xiuying’s
finally
graduated, I have to be the new standard-bearer for fashion in the hallowed halls of Island South High. I’ve got to be tanned, toned, and always dressed in the latest styles.” Her cell phone’s alarm chimed, and she stretched and rolled onto her stomach. Mingmei adhered to her tanning schedule with the kind of dedication Lian
wished
she would apply to her studies.

“How you don’t crack under all that pressure, I’ll never know,” Lian said with a smile.

“I have you to keep me grounded,” Mingmei said, winking over the top of her sunglasses. “Speaking of which, you’re coming shopping with me in Causeway Bay next weekend. If we get there first thing, we can make it all the way through Fashion Walk before they lock up for the night. You can spend a whole day telling me what looks amazing on me, and what looks merely incredible. And of course, I’ll find you some killer outfits, too. This is going to be the Year of Lian. The boys will all get whiplash when you walk down the hall.”

Lian knew that Mingmei was sincere in her offer and that she had an uncanny knack for fashion—but being someone’s dress-up doll was low on her to-do list right now.

Mingmei sighed theatrically. “You always do this. What, is it about money?”

Lian widened her eyes and hissed at her friend to hush.

“I mean,” Mingmei continued, pressing ahead but in a whisper, “your dad is loaded. And, despite all my efforts, you’re a good and responsible daughter—so you must be earning some kind of allowance, right?”

Lian said nothing and rolled onto her stomach, burying her face in her towel. Her parents were generous, to be sure, but she had better things to spend her money on than the latest styles from America or Japan, or wasting a day in search of the perfect accessory to complement a dress.

“I’ve been saving,” she said at last, mostly into the terry cloth. She turned her head toward Mingmei. “I need to upgrade my hard drive, you know. Get a new wireless trackball, network cables . . . um . . . Ethernet transponder uplink dongle.” She was just making up tech terms now; Mingmei wouldn’t know the difference as long as it sounded important—and expensive.

“You and your computer,” Mingmei said, sighing again. “Does the violin get jealous?”

Lian tried not to look too relieved. If that’s what Mingmei wanted to think, she was content to let her.

The truth was messier than she wanted to get into.

“Honestly,” Mingmei said, “you’ve got to unplug from those online games. They have this thing called ‘reality’ now. It’s just like virtual reality but a little less virtual.”

Lian made a show of grimacing. “Sounds awful.”

“And, side note, you’re
never
going to meet a hot guy in the World of Wargames or wherever it is you’re spending your lonely nights playing. You’ve got to stop chasing down bad guys with your keyboard and join the rest of us here in the real world.” Mingmei brightened as an idea struck her. “Why don’t you drop the joystick tonight and come out with me? I’m meeting Jun for ice cream at Appolo. I’m sure he could bring a friend for you.”

“Don’t tell me how you’re shedding pounds when you know you’ve got a crippling Magic Cone addiction,” Lian teased. “Besides, I have to go to some boring business dinner with my parents tonight.” Her lack of enthusiasm for the dinner was real, but it was also nice to have an excuse to avoid a blind date.

“Wow,” Mingmei said. “If you can’t be tempted by cute boys and Tiramisu Monaka, you may be beyond all hope.”

“You’ve got your vices, and I’ve got mine,” Lian said, hoping to end the discussion.

“Okay, okay,” Mingmei said, springing up onto the balls of her feet. “You win this round. Let’s go for a swim.” Mingmei silenced her phone as the alarm chimed again, and they took off from their towels in a hurry.