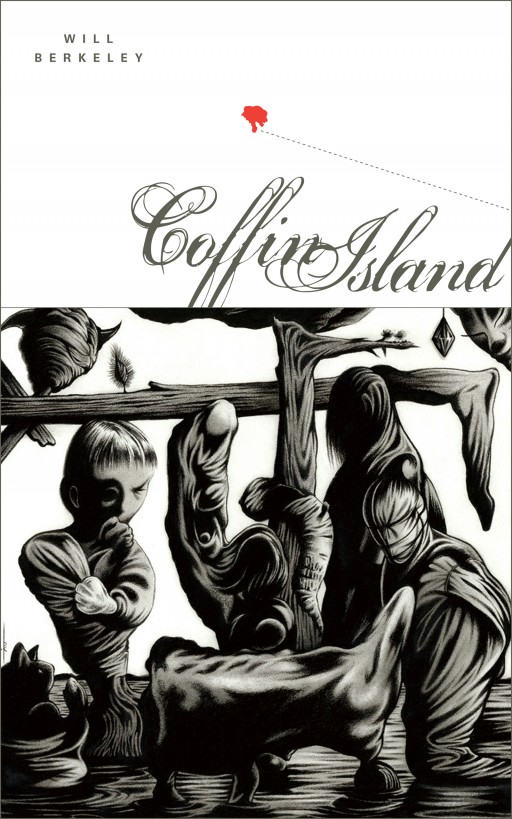 Published by Will Berkeley

“
Welcome to The Coffin
Island School for Witches,” she said. “I am Madison
Kidd.”

I was standing in a castle. Flaming
birds were flying out of the fireplace. Shadowy creatures were
stealing glances at me from behind broken pillars. Some were human
while others were animals.

“
This is Keiser, The King of
the Wombats,” Madison said. “Keiser, this is Booster Boo. He is
purported to be the most powerful witch in creation. However we
shall see about that.”

“Call me Keiser,” The King of The
Wombats said and extended his gigantic paw. “I save my title for
royal occasions.”

Keiser was an enormous wolfhound. His
hazel eyes had an unnerving intelligence.

“
How are you, Booster?”
Keiser asked.

“
A portal to The Coffin
Island School for Witches opened,” Madison said. “Booster got
thrown through it by a goblin. And now he has to deal with a
talking wolfhound that is wombat royalty? How do you think he is
doing, Keiser?”

“
Is this my new school?” I
asked. “The goblin mentioned something about this.”

“
I got bad news for you,”
Keiser said and hooked his snout towards Madison. “The meanest
witch in creation is your roommate. And you can’t change
rooms.”

“
Roommates are magically
fixed on Coffin Island,” Madison said. “Our bond cannot be broken.
Death is a variable but room assignments are not.”

“
There are many conundrums
here,” Kaiser laughed.

“
I thought the goblin was
joking when he told me that I was getting a beautiful girl for a
roommate,” I marveled.

“
I’m terrifyingly
attractive,” Madison snorted. “And I’m obnoxious about
it.”

“
The Coffin Island School
for Witches is entirely coed,” Keiser said. “It builds character in
the bathtub.”

“
The goblin touched upon
that,” I said.

“
You wouldn’t think that it
would work as a punishment but it most certainly does,” Madison
sighed. “Privacy vanished about a year ago. Or perhaps it was just
yesterday. Time cannot be calculated on Coffin Island. Some days we
are running in reverse. Or time has come to a complete
halt.”

“
The hourglass has spun out
of control,” Keiser explained.

“
There is an hourglass on
Coffin Island that controls time,” Madison said. “It has taken on a
life of its own. Yet another bothersome Coffin Island
variable.”

“
It sounds perfectly
reasonable to me,” I said.

I tried to casually back away from the
talking dog and the beautiful roommate but the castle began to
vibrate wildly. I was thinking about dropping out of The Coffin
Island School for Witches immediately. However The Coffin Island
School for Witches had different plans for me. I felt like I was
about to be dropped into some sort of vortex. I stopped what I was
doing. The castle solidified itself nicely. Smart move, I thought.
Don’t move in the land of witchcraft.

“
This part of the castle
becomes a maze when we move,” Madison said. “We call it The Great
Hall.”

“
You can move everything but
your feet,” Kaiser said and batted his tail around.

I stood perfectly still. The Great Hall
sounded lovely. What a great place to get lost for all
eternity.

“
You can get lost for
years,” Madison said. “The Great Hall delights in
mazes.”

There was a giant talking wolfhound?
Time was out of control? My roommate was a beautiful girl? Flaming
birds were flying out of the fireplace? There were shadowy
creatures behind broken pillars stealing glances at me? Some were
human while others were animals? The Great Hall moved when I moved?
It delighted in mazes? I was looking back fondly on the real world.
At least the witchcraft was confined to the house. Having to humor
a few malevolent goblins was looking delightful. What to make of
this fresh hell?

The Coffin Island School for Witches
was witchcraft of the worst order. I was pretty upset about it. I
could already tell that there wasn’t going to be much of a choice
here. Freewill was right out the window. It was like having a
goblin for a nanny. You just have to ride that horror out. At some
point witchcraft will correct itself. Or it will just send you
somewhere else. Descent was just another form of progress. That’s
how witchcraft seemingly works, I thought. Of course I was wrong
about that. Witchcraft was always out to trick you and doing a good
job at that. That’s why they called it witchcraft, I
suppose.

“How do you like The Coffin Island
School for Witches so far?” Keiser laughed.

“
Nobody likes The Coffin
Island School for Witches,” Madison said. “We are all prisoners
here. It’s merely a question of degree.”

“Booster has the meanest witch in
creation for a roommate,” Kaiser said. “The Great Hall delights in
mazes. Magical creatures are watching his every move. I just want
him to know that there are regular guys on Coffin Island like me.
I’m just a regular guy that happens to be a dog. Woof.”

Keiser laughed at his own joke. Then he
barked like a dog. Dog was in his vernacular too. Why not be
bilingual if you’re a magical dog?

I tried not to look too
depressed.

“
I surmised as much,” I
said. “This isn’t my first outing with witchcraft.”

“
You thought goblins were a
nightmare,” Keiser snorted.

“
The wombats can disappear,”
Madison said. “They possess invisibility.”

“
That’s the worst,” I
groaned. “I hate invisible creatures.”

“
After about the thousandth
shower,” Madison said. “Your shame breaks down.”

“
I envision it exiting me
weeping,” I said.

“
That’s about the size of
it,” Madison said.

“
I’m surprised they let us
wear clothes,” I said.

“
They tried to take them
away,” Madison snorted.

“
We descended to such a
level of savagery that they redressed us,” Madison said. “Now we
can’t get them off. They’re magically attached.”

Madison demonstrated how she couldn’t
take off her clothes. What a disappointment, I thought. I was
looking forward to that bath. Scrub my back a bit, will you,
Madison?

“
You see,” Madison said.
“Our clothes are attached to us.”

“
They’re like a second
skin,” I said while attempting to pull off my school boy
uniform.

“
We can slither around
witchcraft a bit,” I said.

“
There is a certain amount
of freewill on Coffin Island that even witchcraft can’t suppress,”
Madison said. “Let’s get the show on the fairy path, shall
we?”

Madison extended her hand. However I
wouldn’t give her mine. I figured she would tear it off. Madison
was ferociously beautiful. Witchcraft doesn’t wrap something nice
in a package like that. Witchcraft was up to the usual. Madison was
horrifically dangerous. I just knew it.

Also it sounds good in theory but do
you really want to room with your fantasy? It’s unsettling to the
nerves. You can’t have your fantasy magically attached at all
times. You need a little distance from that fantasy. Then there
were her clothes. They were not only a second skin. They were
painted on for all purposes.

Madison caused a great deal of anxiety.
She seemed like some sort of siren that had been designed to
unsettle my mind. I was actually quite convinced of this. However
she was real too. There was no denying that because I could feel
that too. Witchcraft couldn’t fake that.

Madison really felt like my
counterpart. Witchcraft wasn’t pulling a prank. However I couldn’t
imagine why witchcraft would permit this. I surmised that
witchcraft was helpless to stop it. Madison and I had always been
on this crash course. So here we are? Fate has just marched up to
greet me. Only it is in the form of an underwear model? Why not? I
deserve as much.

However I was struggling with what to
do next. Fate can easily be ducked, I suppose. But I didn’t have
any moves in the playbook. I didn’t want to get lost in the maze of
The Great Hall. I had caught a glimpse of that abyss. It was truly
horrendous. Not for the amateur sleuth. That was for sure. The maze
was hideous. You’re first step in a new world and you’re lost
forever?

Witchcraft wasn’t playing nice. Not
that it had ever had any manners in the past. It was an uncouth
savage that you avoided at all costs. We all knew that. Sadly, I
had been down this horrible road many times before. Typically at
the dinner table when my meal would attack me. The goblin just
forgot to take the life out of the beast we were proposing to eat.
Dinner was typically quite the battle.

Strangely I was looking forward to
seeing what was lurking out here on Coffin Island. It had to be
truly horrific. Chilling was what I was thinking. This world is
going to be chilling. Downright frigid, I bet.

“Take my hand,” Madison said. “It’s the
only way to keep from getting separated.”

“
Into the maze,” Madison
said.

“
Are you coming or not?”
Madison said.

I grabbed Madison’s hand. It was like
grabbing a power line. My heart felt like it had been paddled. If
we weren’t magically attached before we were now. It actually felt
pretty good. I was magically attached to the hottest girl that I
had ever seen. I wasn’t too terrified. It put the disturbed mind at
ease. Or it heightened the terror. It was hard to pin down like all
good witchcraft.

Madison was purported to be the meanest
witch in creation. What’s there to be concerned about? She’s just
your life partner for reasons that cannot be explained. An
out-of-control force of the occult has put you together. It’s just
a life sentence too. Stop freaking out. There is no afterlife on
Coffin Island. Relax and enjoy the ride. You’re stuck with this
forever.

There are plenty of chills and thrills
ahead on this rollercoaster. Don’t let the occult piece stress you
out. You’ll never get through all this madness if you don’t stiffen
that spine. Let’s see what qualifies as higher learning on Coffin
Island. Throw that black book at me. Rock it steady. I’m
ready.

We walked into the maze. The Great Hall
expanded and collapsed with every step. The width and height of the
hallways changed constantly. Madison walked us through passages
that were continuously changing dimensions. The maze also offered
countless directions. Multiple passages kept appearing in front of
us. The passages seemed endless. I could see why they called it The
Great Hall. It didn’t look like we were ever going to escape.
Eternity in a maze simplified matters. You’ve just got to keep the
rats running. That’s witchcraft for you.

“
It’s nearly there,” Madison
said. “The maze will become inescapable on foot very shortly. The
flaming birds are beginning to struggle. Look up.”

Flaming birds were darting up and down
the passages above us.

“
Are they trying to mislead
us?” I asked.