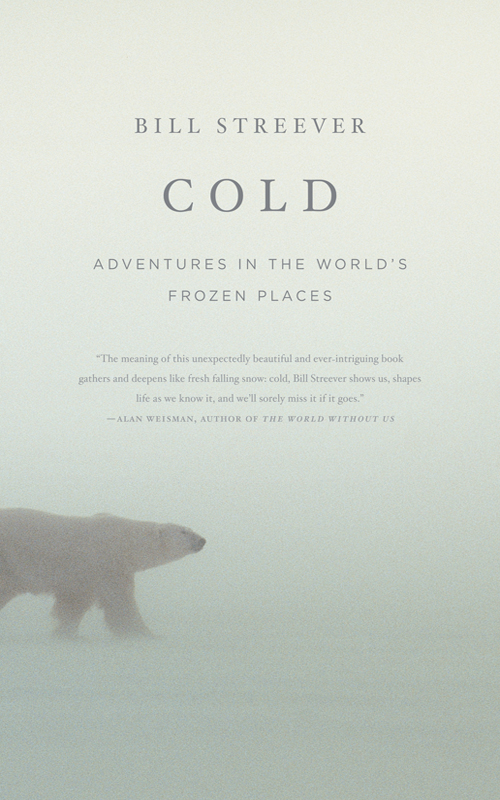 All rights reserved. Except as permitted under the U.S. Copyright Act of 1976, no part of this
publication may be reproduced,
distributed, or transmitted in any form or by any means, or stored in a database or retrieval system, without the prior written
permission of the publisher.

Little, Brown and Company is a division of Hachette Book Group, Inc.

The Little, Brown name and logo are trademarks of Hachette Book Group, Inc.

For my son, Ishmael, who never thinks

it is too cold to play outside

I think myself obliged to give my Readers an account….
Why I thought fit to write of Cold at All?… The subject I have
chosen
is very noble.

The captain had been telling how, in one of his Arctic voyages, it
was so cold that the mate’s shadow froze fast to the deck
and had
to be ripped loose by main strength. And even then he got only
about two-thirds of it back.

T
he world warms, awash in greenhouse gases, but forty below remains forty below. Thirty degrees with sleet blowing sideways
is still thirty degrees with sleet blowing sideways. Cold is a part of day-to-day life, but we often isolate ourselves from
it, hiding in overheated houses and retreating to overheated climates, all without understanding what we so eagerly avoid.

We fail to see cold for what it is: the absence of heat, the slowing of molecular motion, a sensation, a perception, a driving
force. Cold freezes the nostrils and assaults the lungs. Its presence shapes landscapes. It sculpts forests and herds animals
along migration routes or forces them to dig in for the winter or evolve fur and heat-conserving networks of veins. It changes
soils. It preserves food. It carries with it a history of polar exploration, but also a history of farming and fishing and
the invention of the bicycle and the creation of Mary Shelley’s
Frankenstein
. It preserves the faithful in vats of liquid nitrogen from which they hope one day to be resurrected.

Imagine July water temperatures of thirty-five degrees. Imagine Frederic Tudor of Boston shipping ice from Walden Pond to
India on sailing ships in 1833. Imagine Apsley Cherry-Garrard on his search for penguin eggs at seventy below zero in 1911.
Imagine a dahurian larch forest that looks like a stand of Christmas trees on Russia’s Taymyr Peninsula at sixty below or
a ground squirrel hibernating until its blood starts to freeze and then shivering itself back to life.

But none of this is imaginary. Our world warms, but cold remains. In the ordinary passing of a calendar year, the world of
cold emerges. For someone with Raynaud’s disease, a September stroll temporarily changes cold hands into useless claws. Caterpillars
freeze solid in October and crawl away in April. Average temperatures in certain towns drop to twenty below zero in January.

It is time to enjoy an occasional shiver as we worry about a newly emerging climate likely to melt our ice caps, devour our
glaciers, and force us into air-conditioned rooms. It is time to embrace and understand the natural and human history of cold.
Even in a warming world, a world choked by carbon dioxide and methane, cold persists, biting my lungs and at the same time
leaving me invigorated, alive and well on an Arctic spring afternoon with the sun hovering low over an ice-covered horizon
and the thermometer at forty below.

I
t is July first and fifty-one degrees above zero. I stand poised on a gravel beach at the western edge of Prudhoe Bay, three
hundred miles north of the Arctic Circle, and a mile of silt-laden water separates me from what is left of the ice. The Inupiat
— the Eskimos — call it
aunniq,
rotten ice, sea ice broken into unconsolidated chunks of varying heights and widths, like a poorly made frozen jigsaw puzzle.
A few days ago, the entire bay stood frozen. During winter, it is locked under six feet of ice. Trucks drive on it to resupply
an offshore oil production facility. If one were insane, or if one were simply too cheap to fly, or if boredom instilled a
spirit of adventure, one could walk north to the North Pole and then south to Norway or Finland or Russia. Temperatures would
range below minus fifty degrees, not counting windchill.

But even in summer, the weather resides well south of balmy. A chill gust runs through me as I stand shirtless on the water’s
edge, wearing nothing but swimming shorts in the wind and rain.

“The only way to do this,” I tell my companion, “is with a single plunge. No hesitation.”

I go in headfirst. The water temperature is thirty-five degrees. I come up gasping. I stand on a sandy bottom, immersed to
my neck. The water stings, as if I am rolling naked through a field of nettles. I wait for the gasp reflex to subside. My
skin tightens around my body. My brain — part of it that I cannot control — has sent word to the capillaries in my extremities.
“Clamp down,” my brain has commanded, “and conserve heat.” I feel as if I am being shrink-wrapped, like a slab of salmon just
before it is tossed into the Deepfreeze.

My companion, standing on the beach, tells me that I have been in the water for one minute. My toes are now numb.

Time passes slowly in water of this temperature. I think of the ground, permanently frozen in this region to a depth of eighteen
hundred feet. I think about hypothermia, about death and near death from cold. I think of overwintering animals. I think of
frozen machinery with oil as thick as tar and steel turned brittle by cold. I think of the magic of absolute zero, when molecular
motion stops.

After two minutes, I can talk in a more or less normal tone. But there is little to discuss. There is, just now, almost no
common ground between me and my companion, standing on the beach. I feel more akin to the German soldiers whose troop carrier
foundered, dumping them into Norwegian coastal waters in 1940. Seventy-nine men did what they could to stay afloat in thirty-five-degree
water. All were pulled alive from the water, but the ones who stripped off their clothes to swim perished on the rescue boat.
Suffering more from hypothermia than those who had the sense to stay clothed, they succumbed to what has been called “afterdrop”
and “rewarming shock.” Out of the water, they reportedly felt well and were quite able to discuss their experience. But as
the cold blood from their extremities found its way to their hearts, one after another they stopped talking, relaxed in their
bunks, and died.

“Three minutes,” my companion tells me.

I am a victim of physics. My body temperature is moving toward a state of equilibrium with this water, yielding to the second
law of thermodynamics. I shiver.

Several hundred miles southwest of here, six days before Christmas in 1741, the Dutch navigator Vitus Bering, employed by
Russia, lay down in the sand and died of scurvy and exposure, while his men, also immobilized by scurvy, cold, and fear, became
food for arctic foxes. Some accounts hold that Bering spent his last moments listening to the screams and moans of his dying
men. The Bering Sea, separating Russia and Alaska, was named for him, and the island where he died, nestled on the international
date line, is known today as Bering Island.

Northeast of here, in 1883, Adolphus Greely led twenty-five men to the Arctic, stopping at Ellesmere Island. For most of them,
the trip was a slow death that combined starvation, frostbite, and hypothermia. Greely himself, with five others, survived.
He eventually took charge of what would become the National Weather Service, where he failed to predict a blizzard in which
several hundred people died from frostbite and hypothermia. Many of the dead were schoolchildren.

Half a century after Greely’s expedition, in the 1930s, the missionary ascetic Father Henry lived at Pelly Bay, in Canada’s
Northwest Territories, well above the Arctic Circle. By choice, he resided in an ice cellar. Indoor temperatures were well
below zero. The natives would not live in an ice cellar, which was designed to keep game frozen through the short Arctic summer.
It was the antithesis of a shelter, analogous to living in a shower stall to avoid the rain. Father Henry believed that it
focused his mind on higher matters. Almost certainly, some of the natives believed that Father Henry was mad.

“Four minutes,” my companion calls. The stinging in the skin of my thighs has turned to a burning pain. Frostbite is not a
real possibility at this temperature, and true hypothermia is at least ten minutes in the future. What I feel is no more than
the discomfort of cold.

Frogs are not found this far north, but at their northernmost limit, five hundred miles from here, they overwinter in a frozen
state, amphibian Popsicles in the mud. Frogsicles. But caterpillars are found near here. I sometimes see them crawling across
the tundra, feeding on low-growing plants. They freeze solid in winter, then thaw out in spring to resume foraging between
clumps of snow. They are especially fond of the diminutive willows that grow in the Arctic.

Ground squirrels overwinter underground. They are related to gray and red squirrels and to chipmunks, but in appearance they
are more similar to prairie dogs. In their winter tunnels, their body temperature drops to the freezing point, but they periodically
break free from the torpor of hibernation, shivering for the better part of a day to warm themselves. And then they drift
off again into the cold grasp of hibernation. Through winter, they cycle back and forth — chill and shiver, chill and shiver,
chill and shiver — surviving.

This water I stand in feels frigid, bitingly cold, but in the greater scheme of things it is not so cold. A block of dry ice
— frozen carbon dioxide — has a surface temperature just warmer than minus 110 degrees. James Bedford has been stored in liquid
nitrogen at minus 346 degrees since 1967, awaiting a cure for cancer. The surface of Pluto stands brisk at minus 369 degrees.
Absolute zero is some five hundred degrees colder than the water that surrounds me.

“Five minutes,” my companion tells me. I leave the water, shivering, my muscles tense. It will be two hours before I feel
warm again.

Out of the Easy by Ruta Sepetys
Visiones Peligrosas II by Harlan Ellison
After The Rabbit (Waldo Rabbit Series) by Chereta, Nelson
The Tenth Song by Naomi Ragen
The Exiled by Christopher Charles
3rd World Products, Book 16 by Ed Howdershelt
Detour to Apocalypse: A Rot Rods Serial, Part One by Michael Panush
Grave Decisions (A Maddie Graves Mystery Book 7) by Lily Harper Hart
The Wild Places (Penguin Original) by Macfarlane, Robert
The Oath by Tara Fox Hall
Our partner