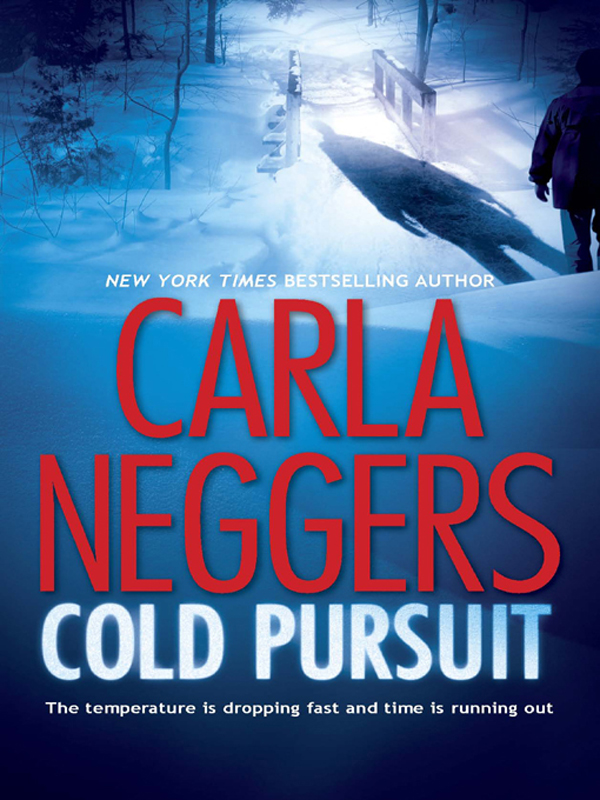 “When it comes to romance, adventure and suspense, nobody delivers like Carla Neggers.”

“Fans of romantic suspense will be charmed.”

â
Publishers Weekly
on
The Angel

“Suspense, romance and the rocky Maine coastâwhat more could a reader ask?
The Harbor
has it all.”

“Neggers keeps the reader guessing âwhodunit' to the end of her intriguing novel.”

â
Publishers Weekly
on
The Widow

“Neggers has created yet another well-matched pair of characters and given them a crackerjack mystery to solveâcomplete with a seriously creepy villain.”

“A keen ear for dialogue and a sure hand with multidimensional characterizations are Neggers' greatest gifts as a storytellerâ¦. By turns creepy and amusing.”

“Carla Neggers is one of the most distinctive, talented writers of our genre.”

To my brother-in-law Bill Ochs

Special thanks to Lieutenant Jocelyn Stohl of the Vermont State Police and to Susan Bayley and Kenneth Thibodeaux of the White River Junction (Vermont) Veterans Affairs Medical Center for your help, as well as for the remarkable work you do. Once again I want to thank Paul Hudsonâjudge, scholar, friend and a Vermonter with deep roots in this incredibly beautiful part of our country.

And, as always, many thanks to Joe, Kate, Conor and Zack. We do have fun together!

D
rew Cameron slipped and went down on one knee in the heavy, wet spring snow, but he forced himself back up again, propelled by a sense of urgency he had never known before.

Please, God. Not my sonâ¦.

Drew took another step, then another, pushing against the fierce wind. Sleet cut into his face and pelted onto the snow-covered trees and juts of granite on the steep terrain. The mid-April storm was worse than was forecasted. In the valley, daffodils were starting to pop up out of the ground. It was mud season in Vermont. If anything, he'd worried about causing more erosion on the trails, still wet from the melting winter snows.

He hadn't bothered strapping a pair of snowshoes onto his pack in case conditions warrantedâa mistake, he realized now.

But he refused to turn back.

He had gone off the main trail hours ago, but he knew every inch of Cameron Mountain. By now, the snow would have covered any footprints he'd left. If anything happened to him, he'd be lucky if searchers found his body for his family to bury.

Take me instead of my son.

How many fathers through the millennia had cried out those same words?

Drew coughed and spat, catching his breath as he came to a lull in the upward sweep of the mountain. The summit was another thousand feet up, but he had no intention of going that far. In all his seventy-seven years, he had never operated on such blind instinct. He couldn't stop himselfâhe had to be here, now, at this moment, asking questions, searching for answers.

He wasn't an emotional man, but he couldn't shake the fear that had gripped him since dawn.

He couldn't shake the images.

Let me die in my son's place.

As he eased among a dense grove of tall spruce trees, their branches drooping under the weight of the clinging, wet snow, he saw young men huddled, battling an unseen enemy.

He saw their blood oozing into the ground of the faraway land where they fought.

He heard their moans of pain amid the rapid, nonstop gunfire.

The vision wasn't born of books and movies, and it wasn't a nightmare to be chased off with daylight and coffee. It was real. Every second of it. Drew didn't understand how the vision of his son in battle had come to him, but he trusted itâbelieved it.

It wasn't a premonition. The attack on Elijah's position wasn't imminentâit was happening now.

Drew stood up straight, out of the worst of the wind. The ice had abruptly changed back to snow. Fat flakes fell silently in the white landscape, but he saw, as clearly as if he were there, the bright stars of the moonless Afghan night. Elijah never talked about his secret missions. He had joined the army at nineteen, without discussing his decision with anyoneânot his two brothers, his sister, his friends.

Definitely not his father.

But there were reasons for that.

“Dear God,” Drew whispered, “let me make up for what I did to him. Please. Give me that chance.”

For fifteen years he had convinced himself he had done the right thing when he had kicked Elijah out of the house and sent Jo Harper back to her family. Even now, Drew accepted that he'd had no other choice.

That didn't mean he didn't have regrets.

A.J., Sean and Rose would forgive him if he died on the mountain he loved, but they'd never forgive him if their brother was killed. That Elijah had chosen to become a soldier and accepted the risks that came with it wouldn't soften his siblings from holding their father responsible for driving him away from the only place he'd ever truly wanted to be.

Drew scooped up snow into his waterproof glove and formed it into a smooth ball. Two weeks ago he had held in his palms a dozen fragrant pink blossoms that had fallen from Washington's famous cherry trees, even as Jo Harper, in her early thirties now, had scrutinized him, obviously wondering if he was half out of his mind.

He hadn't gone into his other reasons for coming to Washington. It seemed crazy now. Crazier even than his reasons for seeking out Jo. More visions emerged, as clear and real as the one of his son in battleâElijah, the boy Jo had loved, now a man.

Drew dropped the snowball into a drift.

Maybe he
was
half out of his mind.

He noticed footprintsâfresh onesâslowly disappearing in the falling snow. He went very still. He wasn't so disoriented and preoccupied that he'd gone in circles.

No, he thought. They weren't his prints.

Someone was up here with him.

Drew crept past the spruce and, just ahead, saw the little house he had spent most of last fall building. He hadn't bothered with permitsâhe figured he'd get slapped with a fine one of these days, but he didn't care. He hadn't meant for the project to get away from him the way it had. After years of searching, he had finally found the cellar hole of the original Cameron house on Cameron Mountain. He had started by clearing out some trees and fixing up the rock foundation, and next thing he knew he was drawing up plans for a simple post-and-beam structureâmore shed than house, really. When he finished it, he meant to present it as a surprise to his family, perhaps their last surprise from him.

The closest trail was up the remote north side of the mountain from a seldom-used old logging road. His great-great-grandfather would have taken that route two hundred years ago. Few even knew about it anymore, and it was impassable for most of the winter.

“We have to think through every detail of every assignment.” A man's voice. Arrogant, deliberate. “We can't go off half-cocked. We have to plan.”

“You plan.” It was a woman this time, impatient. “I'll take action.”

“This is business. We're being paid to do a job. It's not some adventure to keep you in adrenaline rushes. Just because you don't need the moneyâ”

“I
want
the money. That's enough for me.”

A slight pause. “How do you know?”

The door to Drew's little house opened, but he didn't look at who stood on the threshold. Instead he gazed up into the falling snow, letting one flake after another melt on his face. Now he understood his visions. He understood why he was here on Cameron Mountain at this moment.

It was meant to be. He was a father who would get his wish.

His son would live.

Zombie Fallout 5: Alive in a Dead World by Mark Tufo
Lady Anne and the Howl in the Dark by Donna Lea Simpson
Book of Rhymes by Adam Bradley
Intermezzo by Eleanor Anne Cox
The City Beneath by Melody Johnson
Nights at the Alexandra by William Trevor
Burning Your Boats: The Collected Short Stories by Angela Carter
The Champions by Jeremy Laszlo
Celtic Rain (The Battle Raven Series) by Isabelle Stewart
Hazel by A. N. Wilson
Our partner