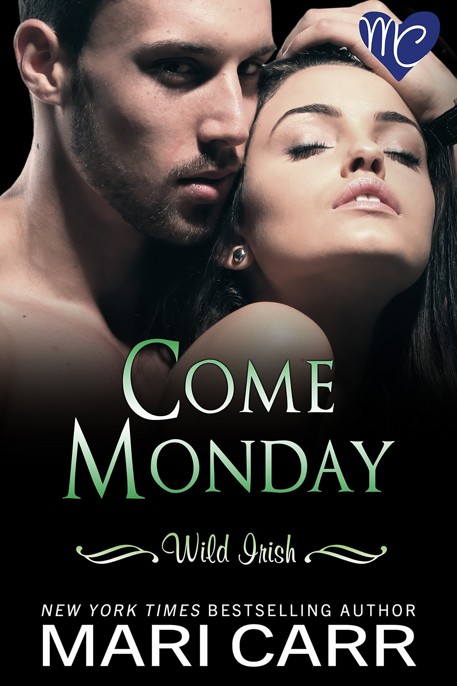 Monday’s child is fair of face…

After the death of her mother years prior, Keira Collins became a surrogate parent to her six younger brothers and sisters, her own dreams put on hold. At twenty-seven, she’s finally pursuing a college degree. Between classes, working at the family pub and still tending to siblings, she’s no time for romance. So why is she spending all her rare free time fantasizing about hot Professor Wallace bending her over his desk?

Will Wallace recognizes Keira’s unfulfilled desires, her habit of hiding her beauty, her obsessive need to command every aspect of her life. But Will has needs of his own—

and they run far darker than Keira’s. As he initiates her into his lifestyle, offering sweet punishments and sweeter rewards, Will’s sexual authority slowly strips away some of her precious control. The one thing Keira’s not ready to relinquish…

This story is dedicated to my husband, Andrew. His amazing support of my

“hobby” that sort of turned into a second career has been more deeply appreciated than he can possibly know.

Monday’s child is fair of face,

Tuesday’s child is full of grace,

Wednesday’s child is full of woe,

Thursday’s child has far to go,

Friday’s child is loving and giving,

But the child who is born on the Sabbath day,

Is bonny and blithe and good and gay.

Keira Collins stared at the paper in her hands and bit back the growl of frustration that bubbled beneath the surface. She’d received another C-plus. Professor Wallace had finished handing out the graded work and was beginning his lesson on the importance of dialogue in fictional writing.

Screw him and his damn quotation marks.

She’d only taken this creative writing class on the advice of her advisor, who claimed she needed another English credit to fulfill the college’s stupid general education requirements. So far she’d taken two years’ worth of what she called “High School, the Sequel”, all without setting foot in a single class in her major program. She wanted a degree in business technology, not to be the next freaking Nora Roberts.

The worst part of this class was, she knew her papers were perfect. English had always been one of her best classes in high school. She knew how to write a complete sentence—unlike Roy Decker. She glanced at the nineteen-year-old frat boy next to her to try to see what grade he’d gotten. She’d been paired up with Roy as critique partners the first week of class back in January. All that basically meant was she practically rewrote every word of his papers while he stared at hers and said, “This is real good.” Roy caught her gaze and flashed his paper toward her with an enormous grin, another C-minus, which apparently delighted the slack-ass boy to no end.

Her temper rose and she shot daggers at the back of her professor’s head as he wrote the proper way to punctuate dialogue within a sentence on the white board.

She’d tried—really tried—to use the man’s asinine comments to improve with each paper, but it was clear she was beating her head against a brick wall—a six-foot-two-inch brick wall with light brown hair and soulful, deep brown eyes.

Crap, why did her teacher have to be so hot? He made her think completely inappropriate thoughts and she’d be damned if she became a cliché—the college coed who falls in love with her professor.

She’d refused to question Professor Wallace personally about her papers because the idea of being anywhere alone with him intimidated the hell out of her. When he looked at her, she felt as if he saw way more than just the surface and she was uncomfortable under his all-knowing gaze. Usually she kept her eyes averted as she took notes from the man’s lectures lest she unwittingly reveal her less-than-scholarly interest in him.

But now it was mid-April, just two weeks from the end of the semester, and she’d finally hit her limit on all these damn C’s. He was younger than most of her college professors—somewhere in his mid-thirties, she guessed, which should make him more approachable, not less. At twenty-seven, she was just old enough to feel completely out of place on campus as she watched the barely-out-of-their-teens student body discussing last weekend’s wild parties. She should be old enough, mature enough to face Professor Wallace without babbling like a child. But there was something about the man. She didn’t have trouble telling anyone what she thought and she considered herself a fairly independent, outspoken woman…with everyone except him.

He turned back toward the class and caught her eye. In the past, she would have scrambled to avoid that intense look. Instead, she narrowed her eyes and held his gaze.

He stumbled momentarily over his words and she felt a small, petty smile curve the side of her lips.

He recovered quickly, finishing his thought, but his eyes refused to move from hers and she felt the moment stretching into a battle of wills. For several minutes, he continued to speak as if she were the only person in the room while she merely stared, not bothering to write down a word of his lecture. She’d pay for that stubbornness later, but right now the only thing that mattered was winning this war.

“Um, Professor Wallace.” Roy’s hand went up, forcing both of them to break their concentration.

Professor Wallace grinned and Keira sucked in a deep breath at the sight. For a moment her confidence, her determination wavered and she considered avoiding the coming confrontation once again.

“So it is. I want you to bring rough drafts of a five-page short story to class next time. There must be a lengthy dialogue included in the story. Class dismissed. Miss Collins,” Professor Wallace added as she rose. “Please follow me to my office. I’d like to speak to you about your paper.”

She’d gone too far apparently, tempted the bear from his den and he had taken the decision to discuss her grade out of her hands.

She stiffened her spine and watched the other students file out as she gathered her things. Once the room was empty, the professor gestured for her to precede him down the hall. She knew where his office was, having stood outside the closed door on more than one occasion debating whether or not to knock and question his grading practices.

She’d never managed to work up the nerve. She was starting to think she wouldn’t have held on to it tonight either.

They approached his office door and he unlocked it, again motioning for her to lead the way. As she entered the room, she heard the door close behind them.

She turned and glanced at the closed door. He followed her gaze.

“I want to ensure that we aren’t disturbed.” His words, though spoken lightly, sent a shiver of fear through her. His voice was deep, sensuous, and she found her thoughts drifting to places best left unexplored.

“How old are you, Miss Collins?” he asked.

She was taken aback by his unexpected question. “I’m twenty-seven. Why?”

“You’re considerably older than the other students in the class.” His reply was succinct, but far from an answer.

She didn’t think it was any mystery that she was older than most of her classmates.

“I don’t consider seven, eight years such a vast gap.” He grinned at her and again she felt overwhelmed by the power of his close proximity. Every time the man got within five feet of her, her body shifted into overdrive. Her nipples were erect, her breathing stilted, her stomach tied in knots.

“I agree. It isn’t,” he assured her, and she realized at that moment he wasn’t completely unaffected by their nearness either. He seemed slightly nervous as well.

As he spoke, his eyes covertly traveled down her body and she was struck by the fact that his wayward glance didn’t bother her, as it did when patrons of the restaurant where she worked did the same. His look seemed to be more appraising, almost clinical, while with other men the look couldn’t be called anything more than a leer, an unsavory study of her body. She’d long ago accepted that men found her pretty. With waist-length, wavy black hair, porcelain skin and ice blue eyes, she’d fought off more than her share of unwanted attention. Of course, it helped that she had four enormous, overprotective brothers at her back.

“No, I don’t live on campus,” she replied. She still lived at home with her father and siblings, still worked as a waitress at the family business, still did everything the same as she had when she was a teenager. She sighed as she considered his question and how dull her life truly was.

Her mother had passed away midway through her senior year and the raising of her six younger brothers and sisters had fallen to her. Not that her father had ever charged her with that duty. As the oldest, she’d simply assumed the role because, well, there hadn’t been anyone else and because she loved her family almost to the exclusion 10

of everything else. She wondered sometimes if she’d almost lost her own identity in that love.

She glanced at the clock that hung on his wall. Five fifteen. She only had forty-five minutes to weave her way out of this unusual conversation and bust ass across town to be at work by six.

“You have some concerns about your grade, I believe.” His astute comment, on the heels of his strange questions, left her reeling.

Charming: A Modern Day Sexy Cinderella Story by Jennifer Miller
Murder on the Orient Express by Agatha Christie
Dark Legion by Paul Kleynhans
Fenris, El elfo by Laura Gallego García
Wild Is the Night by Colleen Quinn
Winter Fire by Elizabeth Lowell
The Fall of the Governor, Part 2 by Robert Kirkman
All My Life by Rucy Ban
Guys on Top 02 - Guys on the Side by Darien Cox
Cowgirl by G. R. Gemin
Our partner