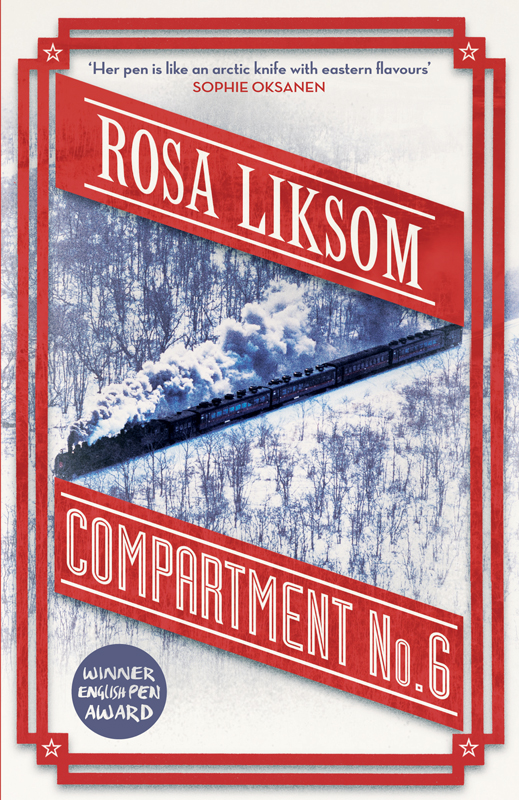 ROSA LIKSOM
is a Finnish artist and the author of over a dozen books. She won the Finlandia Prize in 2011 for
Compartment No. 6
, now translated into thirteen languages.

This book has been selected to receive financial assistance from English PEN's âPEN Translates!' programme supported by Arts Council England. English PEN exists to promote literature and its understanding, uphold writers' freedoms around the world, campaign against the persecution and imprisonment of writers for stating their views, and promote the friendly co-operation of writers and free exchange of ideas.
www.englishpen.org

The right of Rosa Liksom to be identified as the author of this work has been asserted by her in accordance with the Copyright, Designs and Patents Act 1988

Published by agreement with the Hedland Literary Agency

The characters and events in this book are fictitious. Any similarity to real persons, dead or alive, is coincidental and not intended by the author.

All rights reserved. No part of this book may be reproduced, stored in a retrieval system or transmitted in any form or by any means, electronic, mechanical, photocopying, recording or otherwise, without the prior permission of the publisher.

First published in 2014 by Serpent's Tail,

an imprint of Profile Books Ltd

MOSCOW HUNKERED DOWN
into a dry, frozen March evening, sheltering itself from the touch of an icy sun setting red. The girl boarded the last sleeping car at the tail end of the train, found her cabin â compartment number six â and took a deep breath. There were four bunks, the higher two folded against the wall above. There was a small table between the beds with a white tablecloth and a faded pink paper carnation in a plastic vase. The shelf at the head of the beds was full of large, clumsily tied parcels. She shoved the unprepossessing old suitcase that Zahar had given her into the metal storage space under the hard, narrow bunk and threw her small backpack on the bed. When the station bell rang for the first time she went to stand at the window in the passageway. She breathed in the smell of the train: iron, coal dust, smells left by dozens of cities and thousands of people. Travellers and the people with them pushed past her, lugging bags and packages. She touched the cold window and looked at the platform. This train would take her to villages of exiles, across the open and closed cities of Siberia to the capital of Mongolia, Ulan Bator.

When the station bell rang the second time she saw a muscular, cauliflower-eared man in a black working-man's quilted jacket and a white ermine hat and with him a beautiful, dark-haired woman and her teenage son, keeping close to his mother. The woman and the boy said goodbye to the man and walked arm in arm back towards the station. The man stared at the ground, turned his back to the icy wind, pinched a Belamorka, lifted it to his lips and lit it, smoked greedily for a moment, stubbed the cigarette out on the sole of his shoe, and stood there, shivering. When the station bell rang for the third time, he jumped on the train. The girl watched him walk towards the back of the car with swinging steps and hoped he wasn't coming to her compartment. She hoped in vain.

After a moment's hesitation she went into the compartment and sat on her own bunk across from the man, who radiated cold. Both were silent. The man stared sullenly at the girl, the girl at the paper carnations, uncertain. As the train jerked into motion Shostakovich's Eighth String Quartet burst forth from loud, plastic loudspeakers in the compartment and passageway.

And so the Moscow winter, the steel-blue city warmed by the evening sun, is left behind. Moscow â the city lights and the noise of traffic, the circle dance of churches, the teenage boy and the beautiful dark-haired woman with one side of her face swollen â are all left behind. The sparse neon signs against a morose, pitch-black sky, the ruby stars on the towers of the Kremlin, the waxed bodies of the good Lenin and the bad Stalin, and Mitka, are left behind. Red Square and the Lenin Mausoleum, the lacy iron railings of the spiral staircase at the GUM department store, the Intourist international hotel with its foreign currency bar, its floor staff commandeering living space in the cleaning cupboards and looking for Western make-up, perfume, and electric razors, are left behind. Moscow, Irina, the statue of Pushkin, the ring roads and the metro's circle line, Stalin's thoroughfares, the Western-style, multi-lane Novy Arbat, the Yaroslavl Highway and the rows of dachas embellished with carved wooden flourishes, the slack, weary, overworked land, are left behind. An empty freight train a hundred metres long zooms by outside the window. This is still Moscow: a mass of nineteen-storey prefab buildings in the middle of a mud pit, faint, glimmering lights trembling in their icy windows, a construction site â half-finished highrises with gaping holes in their walls. Soon they, too, will be silhouettes in the distance. This is no longer Moscow: a house collapsed under the snow, a wild, swaying pine forest covered with frost, a clearing blanketed with snow, a gentle mist trapped under piles of snow, darkness, a lone log house in an expanse of white, an unkempt apple tree in the yard, a mixed forest stiff with snow, the plank fences of villas, a ramshackle wooden barn. An unknown Russia frozen in ice opens up ahead, the train speeds onward, shining stars etched against a tired sky, the train plunging into nature, into the oppressive darkness lit by a cloudy, starless sky. Everything is in motion: snow, water, air, trees, clouds, wind, cities, villages, people, thoughts. The train throbs across the snowy land.

The girl could hear the man's heavy, peaceful breathing. He was looking at his hands; they were large and strong. The light from switching lanterns flashed on the surface of the ground below. Sometimes the view was blocked by train carriages standing on the tracks, sometimes the dark of the Russian night spread outside the window, here and there a faintly lit house flashed by. The man looked up, gave the girl a long, piercing once-over, and said with relief, âSo it's just the two of us. The shining rails carrying us to God's refrigerator.'

A stocky, uniformed old carriage attendant appeared in the doorway of the compartment and handed each of them clean sheets and a towel. âNo spitting on the floor. The passageway is cleaned twice a day. Your passports, please.'

Having received their passports, she left with a sneer. The man nodded after her.

âThat old bag Arisa has militia powers. She keeps the drunks and whores in line. It's best not to mess with her. She's the god of heat on the train. Keep that in mind.'

He took a folded knife with a black handle out of his pocket, removed the safety catch, and pressed a button. There was a ringing of metal as the steel blade clicked and sprang open. He put the knife carefully on the table and dug a large chunk of Rossiskaya cheese, an entire loaf of black bread, a bottle of kefir and a jar of smetana out of his bag. Last he brought out a bag of pickles dripping salt water and started to pop them into his mouth with one hand while he devoured the black bread he held in the other. When he'd finished eating, he reached into the bag and took out a wool sock with a glass bottle of warm tea inside it. He looked at the girl for a long time. His eyes showed distaste at first, then a greedy curiosity, and finally some degree of acceptance.

âI am Iron Steelavich,' he said. âMetal man and general labourer to the princes of Moscow. Vadim Nikolayevich Ivanov is my name. You can call me Vadim. Would you like some tea? It has vitamins, so it's good for you to drink a cup or two. I was thinking for a moment that they'd given this old codger a stiff sentence, put me in the same cage with an Estonian. There's a difference between the Finlyandskaya respublika and the Sovietskaya Estonskaya respublika. Estonians are hook-nosed German Nazis, but Finns are basically made from the same flesh as we are. Finlandiya is a little potato way up north. You people are no trouble. All the world's northern people are one tribe, a northern pride holds us together. By the way, Miss, you're the first Finn I've ever seen. But I've heard a lot about you. You Finns have prohibition.'

He poured her a glass of black tea. She tasted it warily. He savoured a small sip of his own, then got up and made his bed. He undressed modestly, taking off his outermost clothes, his thick black trousers with their narrow leather belt, his light jacket sewn from coarse fabric, and his white shirt, and folded them neatly at the end of the bed. He pulled on striped, sky-blue pyjamas and crept in between the starched sheets. Soon his cracked heels and toes, twisted from poor shoes and neglect, emerged from under the blanket.

âGood night,' he said with a bland look on his face, almost whispering, and fell immediately asleep.

The girl was awake for a long time. The shadows of the tea glasses moved around the dim compartment without lighting on anything. She had wanted to get away from Moscow because she needed distance from her own life, but now she was already yearning to go back. She thought about Mitka, Mitka's mother Irina, Irina's father Zahar, and herself, how they were all doing. She thought about their temporarily shared home, which was empty now. Even the cats, Miss Dirt and Tom Trash, were gone. The engine whistled, the rails screeched, the rattling train pounded metallically, the man snored quietly all night long. The sound reminded her of her father and she felt safe. Finally, in the wee hours, as the shadows began to dwindle, she fell into a frothy, white dream.

Crossing Over by Ruth Irene Garrett
No One Loves a Policeman by Guillermo Orsi, Nick Caistor
Blue Hour by Carolyn Forche
Sentenced to Death by Barrett, Lorna
October Fest: A Murder-by-Month Mystery by Jess Lourey
Royal Captive by Marton, Dana
Legal Legacy 2 (Surrendering Charlotte Chronicles Book 10) by Kimball Lee
In the Wind by Bijou Hunter
Touch of the Demon by Christina Phillips
Into the Void: Star Wars (Dawn of the Jedi) by Tim Lebbon
Our partner