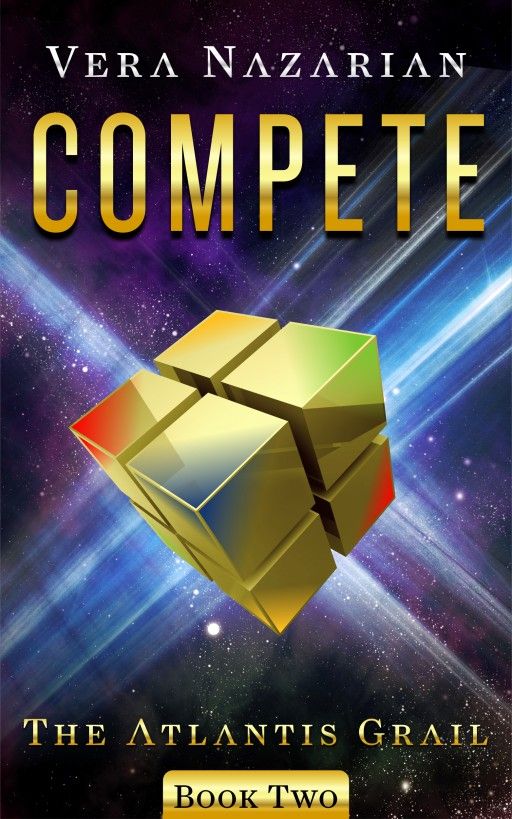 It’s one thing to Qualify…

But do you have what it takes to Compete?

With Earth about to be destroyed by an extinction level asteroid, teenage nerd, geek, and awkward smart girl
Gwen Lark
, and a few of her friends and loved ones, barely Qualified for rescue onboard one of the thousands of ark-ships headed to the ancient colony planet Atlantis.

Now faced with a year-long journey in space, life in a wondrously alien environment, and many tough life choices, Gwen must decide who or what she will become. Fleet Cadet or Civilian? Friend or lover? Average or extraordinary?

Can she make new friends? Can she trust the old ones, such as
Logan Sangre
, her sexy high school crush and an Earth special operative?

Time and time again, Gwen’s uncanny ability to come up with the best answer in a crisis saves her life and others. And now, her
unique Logos voice makes her an extremely valuable commodity to the Atlanteans—so much so that her enigmatic commanding officer
Aeson Kassiopei
, who is also the Imperial Prince of Atlantis, has taken an increasingly personal interest in her.

Before the end of the journey, Gwen must convince him that she has what it takes to compete in the deadly Games of the Atlantis Grail.

It’s becoming apparent—the life of her family and all of Earth depends on it.

COMPETE is the second book in The Atlantis Grail series.

We promise not to spam you or chit-chat, only make occasional book release announcements.

Published by Norilana Books at Smashwords

Discover other titles by Vera Nazarian at

This book is a work of fiction. All characters, names, locations, and events portrayed in this book are fictional or used in an imaginary manner to entertain, and any resemblance to any real people, situations, or incidents is purely coincidental.

All rights reserved. No part of this publication may be reproduced, stored in or introduced into a retrieval system, or transmitted, in any form, or by any means (electronic, mechanical, photocopying, recording, or otherwise) without the prior written permission of the copyright owner.

This ebook is licensed for your personal enjoyment only. This ebook may not be re-sold or given away to other people. If you would like to share this book with another person, please purchase an additional copy for each person you share it with. If you’re reading this book and did not purchase it, or it was not purchased for your use only, then please return to Smashwords.com and purchase your own copy. Thank you for respecting the hard work of this author.

Other Books
by Vera Nazarian

T
oday is a day unlike any other, in a whole sequence of unbelievable days.

Today we pass the solar orbit of Mars.

And today, five days after Qualifying for rescue and being admitted onboard the giant interplanetary Atlantean starships, we—all ten million of us, teenagers from the doomed planet Earth—have to make a decision that will determine the rest of our lives.

The choice looms before us, inevitable and irrevocable. We’ve been given five days to think, to consider carefully, to mull it over, while for the first two days the great ships of Atlantis prepare for the immense journey back to the Constellation of Pegasus—loading supplies and resources, cultural and natural treasures of Earth, and taking the measures necessary for transporting all of us safely to the colony planet Atlantis that will now be our new, permanent home.

On the evening of Qualification, and the day immediately after, the Fleet of Atlantis stayed in Earth orbit. For me that time remains a strange, dead blur. . . .

While the transport shuttles ferried supplies and our belongings, we had the chance to contact our families for the last time and say goodbye to our parents and loved ones—to all those who must now remain on Earth, and die from the impact of the extinction-level asteroid . . . while we, the lucky ones, fly onward to the stars.

The asteroid is going to hit Earth seventeen months from now, on November 18, 2048, and there is nothing anyone can do to prevent the destruction of all life on Earth.

I admit, I have a very poor recollection of these past five days. I am still in a stupor, even as I struggle to hide it for the sake of my younger siblings, Gracie and Gordie. It’s an awful, mind-numbing combination of despair and grief that started from the moment my older brother George did not Qualify and was denied admittance onto the Atlantean transport shuttle with the rest of us. By now, George is back at home in Highgate Waters, Vermont, with Mom and Dad. I know, because I talked to them, on that same night after passing the Qualification Finals. . . .

I talked to them.

It’s a numb blur. Events mixing, memories out of order. I remember being packed into a small, closet-sized cubicle with the softly rounded walls of pale off-white, everything etched with hair-fine intricate designs in lines of gold that all the Atlantean interiors have, bathed in soothing light. . . . Yes, I was still somewhere onboard that same transport shuttle that had taken us up through the miles of atmosphere and docked with a great ship in Earth orbit.

For whatever reason, they didn’t let us off the shuttles immediately. Instead we had to wait, and meanwhile take turns in the communication cubicle chamber. At some point I remember being in line . . . glimpses of stressed serious faces of other Qualified Candidates . . . hushed teen voices speaking in foreign languages . . . and Logan Sangre standing at my side, his serious hazel eyes never leaving me, his strong arms coming around from the back as abruptly he pushes me forward, ahead of his own turn. And suddenly there I am, sitting next to Gracie and Gordie and an Atlantean technician who, I vaguely recall, touches a strange, asymmetrical and lumpy silvery surface, “dials” Earth, and connects us via a video console. The display screen loads and suddenly there’s our living room. . . .

I remember thinking how crazy it was to see our old sofa
from outer space
. . . Mom’s familiar brown-and-beige plaid throw blanket draping the back of it . . . and Mom and Dad themselves perched nervously and awkwardly on the edge of that same sofa, staring back at all of us—actually at the smart wall in our living room that now acted like a trans-orbital video conference device.

Moment of Impact by Lisa Mondello
How to Defeat Harmful Habits (Counseling Through the Bible Series) by June Hunt
Before He Wakes by Jerry Bledsoe
Official Book Club Selection by Griffin, Kathy
Crashing Into Tess by Lilly Christine
Dark and Bright by Anna Markland
Nailed (Marked For Love #1) by Amie Stuart
Lost Lake by David Auburn
Pemberley to Waterloo: Georgiana Darcy's Diary, Volume 2 by Elliott, Anna
The Amulet of Amon-Ra by Leslie Carmichael
Our partner