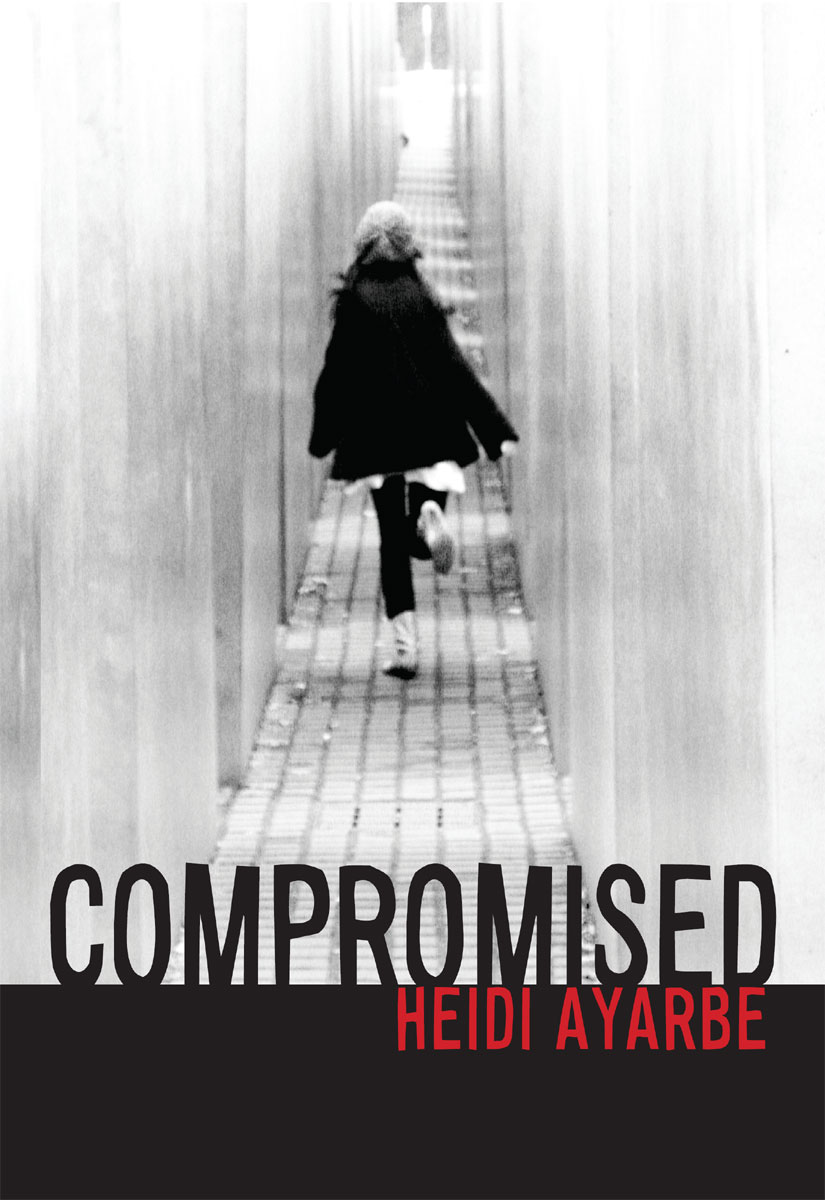 For my dad and mom, Gil and Twylah Ayarbe,

with love and admiration.

First they take our flat screen.

Step two: Hypothesis. The hypothesis, though, is based on priorâ¦

We walk into the cafeteria, and I head to whereâ¦

At breakfast the girl is wearing my clothes. My favoriteâ¦

When we get back to Kids Place, I head forâ¦

After a day of talking to counselors and meetings withâ¦

Beulah sits next to me in her polyethylene terephthalate suit.

Pressure is an easy scientific equation that measures the forceâ¦

“The library? You run away to go to the library?”

Rats scratch and scuffle in the walls. Paws patter acrossâ¦

“I just want to know why you have the bottle,”â¦

Nicole is still with me. I never really thought she'dâ¦

Nicole hands me some jelly and I slurp it down.

Nicole says, “Are you finally awake?”

“I think from now on, we might have to steerâ¦

The lady drops us off a few miles down theâ¦

I run through the plan of the day in myâ¦

“You can't be here. You gotta go. This is myâ¦

We strap our packs on our backs. I look aroundâ¦

I've decided I'm being pretty negative about the planâand absolutelyâ¦

We walk through the casino unnoticed. That's a good thingâ¦

“Are you kids here for the program?”

We huddle in the truck. And wait.

“Well, don't just sit there staring at me like someâ¦

“This is kinda fun.” Nicole adds another stick to theâ¦

“I still don't know why we can't stay here. Asswipes.”

Nicole and I read all night by the light ofâ¦

We hug our coats around our bodies and walk backâ¦

“Clear out!” The voice booms in the alleyway.

“We better try to get out of Boise today, okay?”

“Pay attention to the area. So we know how toâ¦

“Klon?” Nicole bends down beside him. “Klon. Wake up.” Myâ¦

I wait, hugging the bag tighter, afraid to go throughâ¦

Afternoon sunlight seeps through the blinds. I rub my eyesâ¦

When I open my eyes, I notice for the firstâ¦

I get to the hospital before six o'clock and wait.

“I've been to a synagogue, Lutheran and Methodist churches, evenâ¦

One hundred and eleven dollars. From Boise to Jackson Hole. Each.

Billie motions me into her small office while she finishesâ¦

“Thanks for the ride.” I climb out of Billie's car.

The door beeps when I open it. I pound myâ¦

Other Books by Heidi Ayarbe

And the computers, all of Dad's satellite equipment, stereos, DVDs. Even the George Foreman grill.

I watch from down the street as they pile our things in the rusty trailer. I steady my breathing and walk up the driveway.

Dad sits on the front steps, head leaning against the brick porch. Icy beads of water drip off his beer can.

“You're home early,” I say, walking up the driveway.

I pause at the front door, running my hand over the smooth oak. I grasp the brass doorknob before entering, then wander through the stripped roomsânaked
sockets, way preâBest Buy.

The only thing they left is that garage sale microwave that whistles when it's on. I haven't used it for about a year, though, since I don't want to grow an extra ear from electromagnetic waves. Not scientifically viable, but I'm not taking any chances.

I slump next to Dad on the porch. It's not like I'm surprised. We're all creatures of habit and this was bound to happen. But I can't help feeling disappointed. I guess things had been going too well for too long. My chest tightens.

Dad shakes his head. I smell beer on his stale breath.

He pulls me in close. “That's my girl.” Dad pushes my hair back behind my ears and wraps his arm around my shoulders. “You look a lot like her, you know. You have her eyes. Gray.”

Yeah. Storm clouds. Sadness. Thanks for comparing me to the chemically imbalanced family member. Who would want to be anything like her? I shrug, pushing the knot from my throat. “Who cares about all that stuff? We'll be fine.” We always are.

He smiles. Tired. He always looks tired just before a move.

I scan the block, taking in the variety of decorative flags:
everything from cutesy pumpkins to ladybugs. Manicured lawns, ceramic house numbersâit'll be a while before we live in another neighborhood like this.

Dad leaves after I go to bedâlike I'm not gonna know. He probably has some loose ends to tie up. I always picture Dad's bungles like a tangled-up small intestineâtwenty-odd feet of knots and feces.

After I hear the clatter of the garage door shutting, I raid the dwindling supply of Pepto-Bismol to coat the burn in my stomach.

Hypothesis:
If they've taken our TVs, DVDs, and stuff, they'll come back for more.

I just hope we won't be here when they do.

Next they take our car.

They drive up in a mud-caked truck that has
ROY'S REPO
painted on the side in faded red letters. It actually says
ROY' RPO
. And they have one of those bullet-hole stickers on the side.

Different guys from the ones before.

The big guy wears jeans and a shirt that rides up his stomach. A sweat-stained baseball cap sits crooked on his head. He scratches his gut and stretches his faded T-shirt down. I watch them through the laundry room window.

“Roy's Repo!” The big guy raps on the door with raw knuckles. “We know you're in there.”

I hold my breath, hoping they'll go away. Hoping they'll hop back into their truck and drive away. But I know that's dumb. Hope isn't realâjust a circuitry problem in my head.

He bellows, “Mr. Sorenson. We need to talk to you, and we're not going to wait all day.”

I duck to keep away from the windows and crouch behind the kitchen counter to phone Dad. The line's dead. My cell service had been “discontinued” too. It's not like I was text queen, anyway. I don't think the only message I gotâthe one from Genevieve Dodge when I went to one of the science club's lunch meetings that said
SCI BTCH GO HOME
âjustified Dad paying my unlimited texting plan. I think she was miffed that I figured out the joke: What's the chemical name of CH
2
O? Seawater. Like who couldn't figure that one out? I stare at the useless phone. I might as well have had two cups with string attached to them.

I slip out the back door and jump the fence to call Dad from Mrs. Velasquez's house. “I think we're having trouble with our phone line,” I tell her.

Mrs. Velasquez's eyes narrow. She crosses her armsâthat perfect I-told-you-so stance only nags can pull off. She stopped bringing us her homemade flan and sopapillas when Dad made a business deal with her brother. The guy probably should've checked out the nice beachfront property at Lahontan before he went for it. Maybe he didn't have Google Earth or something. Anyway, she's pretty bitter now.

I dial, trying to keep my hand from shaking too much. “They're here.”

“I'll be right there.” I listen to the click and hum of the line.

Dad drives up in his Beemer. The latest model. He swings open the door and steps into the dry October heat. We're having a weird heat wave in Reno. Last year at this time Dad was all psyched about getting me into skiing. I shade my eyes and watch them talk. The tears are probably just from the glare of the sun. Definitely global warming. But the end of the earth doesn't seem all that important right now.

Dad looks handsome in his pressed suit and starched shirt. He loosens his Italian silk tie and faces the repo guys. As soon as Dad starts to talk, the red splotches on the big guy's face fade. He looks almost apologetic. Dad's got big-time attractive genetics. Some people are genetically more attractive than others. It's their smell, their chemistryâsomething inherent in that double helix, twenty-three pairs of chromosomes. Most people call it charisma. Whatever you want to call it, Dad has it.

The big guy tugs at his shirt. The short guy turns to the house, eyes me, and winks. He flexes and flares his nostrils.

Dad points to the house. “Misunderstanding, I'm sure,” he's saying as he passes me on the porch. “Maya, honey, can you get these gentlemen something cold to drink?”

I nod and go to the kitchen, fishing out two of the coldest Cokes I can find in the cooler. The ice has melted. A piece of lactose-free Velveeta cheese floats and bobs. I give them the Cokes, making sure there's no skin-to-skin contact. The last thing I need is scabies or some other kind of communicable disease repo guys have buried under their skin.

The big guy hands Dad a letter. “Here's the information,
if you want to try to get your car back.”

Dad flashes me a look. Panic. Funny. I still don't get how he doesn't see this stuff coming. Supposedly we use about ten percent of our brain capacity. But since the brain's hard drive is never fullâwith an infinite capacity to learn, taking ten percent of infinity is impossible. Pretty arbitrary, really. The brain's potential, with ten billion neurons and one hundred and twenty billion glial cells, is staggering. Potential, however, is the key word.

It's out of his hands now.

The repo guys leave dusty footprints all over the carpet. The engine of the truck sputters, then roars to life. We watch as they tow away the car. Dad flinches.

“It's just a car, Dad. Whatever.” I try to hide my anger and throw the letter on the table, turning my back to him. I know he's sorry. But sometimesâ¦sometimes sorry isn't good enough.

“It's a setback, baby. Nothing more.” He moves to me and puts his arm around my shoulder. “Let's go out to dinner.”

We don't even have money to pay our phone billâwhere will we get the money for dinner? I look down at
my designer jeans and trendy shoes. It's not rational to get upset over
things
, but my throat feels like somebody has wedged a grapefruit in it.

“How about going to that steak house we like so much?” Dad pulls out his wallet and flips through his credit cards.

I pry open the lid of the cooler. “Let's just eat grilled cheese sandwiches.” I do a mental inventory of the things I can sell. We just need enough to get us a couple of bus tickets to Nowhere, U.S.A.

Dad sits slumped over the kitchen table, his head cradled in his hands. The sandwiches sizzle in the fry pan. At least they haven't cut the gas line. Yet. I pass a sandwich to him on our last Chinet plate and hold mine in a napkin. It'll pass. We'll be okay. We just need about a thousand miles between Dad's latest scam and us.

Before bed, I make the plan. It's always worked before.

Purpose:
Keep Dad out of trouble

Hypothesis:
If I get all of our money together and get us on a bus ASAP, Dad and I will make it out of Reno safely.

1) Get money from the cache

5) Convince Dad to go with me

Plan B by SJD Peterson
Keep It Simple (MMG Series Book 4) by Hilliard, R.B.
Taken by Surprise by Tonya Ramagos
Spin the Sky by Katy Stauber
Fall into Her (Fall into Him Book Two) by Harper, Evelyn
The Resurrected Man by Sean Williams
She Can Run by Melinda Leigh
Fair Game by Josh Lanyon
The Time Fetch by Herrick, Amy
Xenopath by Eric Brown
Our partner